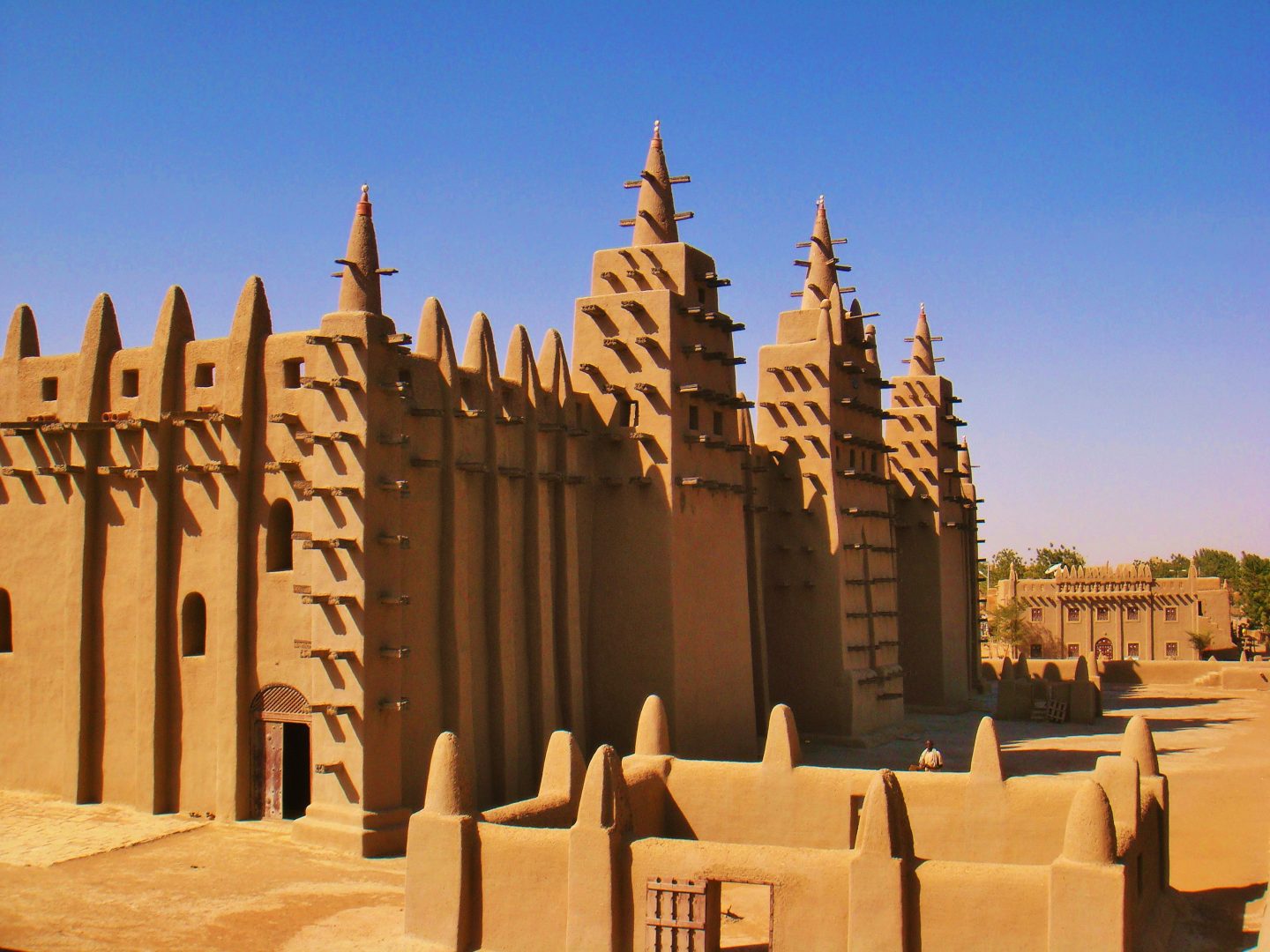 Every building is said to have a secret, whether in the very fabric of its walls or the events that have unfolded within. Never would this surely be truer than at the iconic Grand Mosque in Djenne, northern Mali; the largest free standing mud brick building in the world and harking back to a time of tribal empires long since fallen.

Reaching Djenne first requires crossing the Bani river. In low, dry season flow, we boarded a rickety ‘roll-on roll-off’ ferry with room for a few cars, a few pedestrians and not much more for the short crossing.

Djenne old town bustled with cars, motorbikes, donkey pulled carts, and pedestrians. Majestic at its centre, and still the site for weekly markets, is the Grand Mosque. The tallest building around, it is constructed entirely in the ‘adobe’ style, meaning mud from the river banks is mixed with straw, fashioned into bricks and dried in the sun.

I say ‘is mixed’ because every year, the town has a festival in which the mosque is repaired. A new layer of adobe plastering is used to fill the cracks which occur in the extreme Summer heat, and repairs made to damage done with the pounding of the annual rains.

I also say ‘is mixed’ because Djenne was awarded UNESCO World Heritage site status in 1988. A just recognition for its historic splendour but which also means all the adjacent shops and houses must be kept exactly as they were, repaired with only original products. Though the architectural beauty is retained, I feel for the locals who would dearly like to extend or better insulate their homes but are not allowed.

Despite being a place of Muslim worship, Amy and I were allowed to enter by the caretaker, in return for a small donation to the mosque. Illuminating the cool, dark windowless prayer hall were the occasional cracks of light leaking in from doors and air vents. The odd naked light bulbs were strung between numerous high arched mud brick pillars. The occasional fan was also affixed, as were old fashioned loud speakers to amplify the sermons. The floor was covered with innumerable overlapping mats, on which a few elderly gentleman were dozing or reading. We stirred a raised eye brow but nothing more.

As we chatted with the caretaker in a tangled mess of Arabic and Malian French, we learned the worst kept secret of Djenne’s Grand Mosque: it is not the original. Though it is surely the finest example of Sahelian adobe architecture in the world, it was in fact built by the French in c. 1908. The original dated back to the 13th century but did not stand the test of time and of the elements.

Our short tour over, and with this revelation ringing in our ears, we wandered to a nearby village. In the shade of their orphanage walls, smiling children were practising their Qur’anic Arabic with coal ink quills upon smooth wooden boards. Once their work was checked by the teacher, the ink is simply washed off, ready for the next exercise. This renewal and regeneration got me thinking.

Rather than be whittled and washed away by the harsh heat and pounding rains, their history and their culture to be lost forever, the people of Djenne repair and restore their ancient city every year. Far from the walls of Djenne’s Grand Mosque harbouring a secret, the people of Djenne ensure that the walls can speak for them, for their traditions and for their history for many many years to come. That is, perhaps, the true secret within the walls of Djenne.