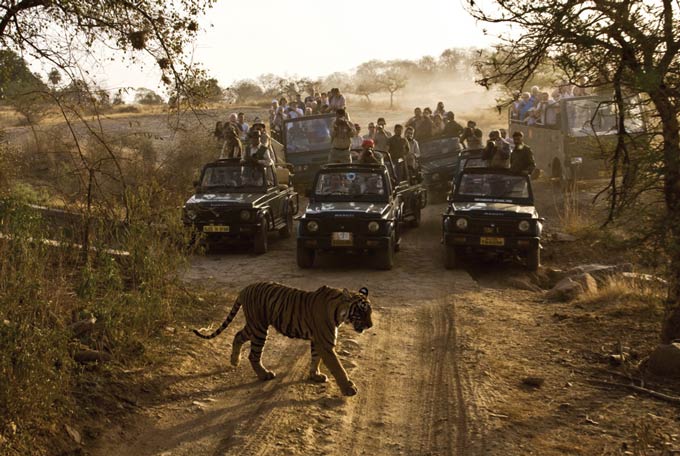 The Indian tiger is an enigmatic beast; a casually confident, territorial predator. But, as it turns out, not the most territorial animal in India’s national parks.

At the start of a two week tour of Rajasthan, I visited Ranthambore National Park in the hope of catching a glimpse of this rare animal. Extending to over 390 km sq, it is one of the best places to do so, attracting tourists all year round.

Picked up before dawn in an open topped safari vehicle, we were buffeted by freezing winds as we drove at speed around the town picking up fellow passengers. Many, better prepared than I, were swathed in thick blankets to stave off the chill.

As pre-dawn darkness slowly gave way to the warmth of a rising sun, we entered the national park through the tall imposing gates. Our guide selected an exploratory route along the many dusty tracks, trying to lose the traffic of the dozen or so other tour vehicles permitted to enter that morning.

The abundance of spritely deer, gruff foraging warthogs, ubiquitous rhesus macaques and exotic birds quickly illustrated that there was abundant wildlife here. But we were here for one thing only: tiger. 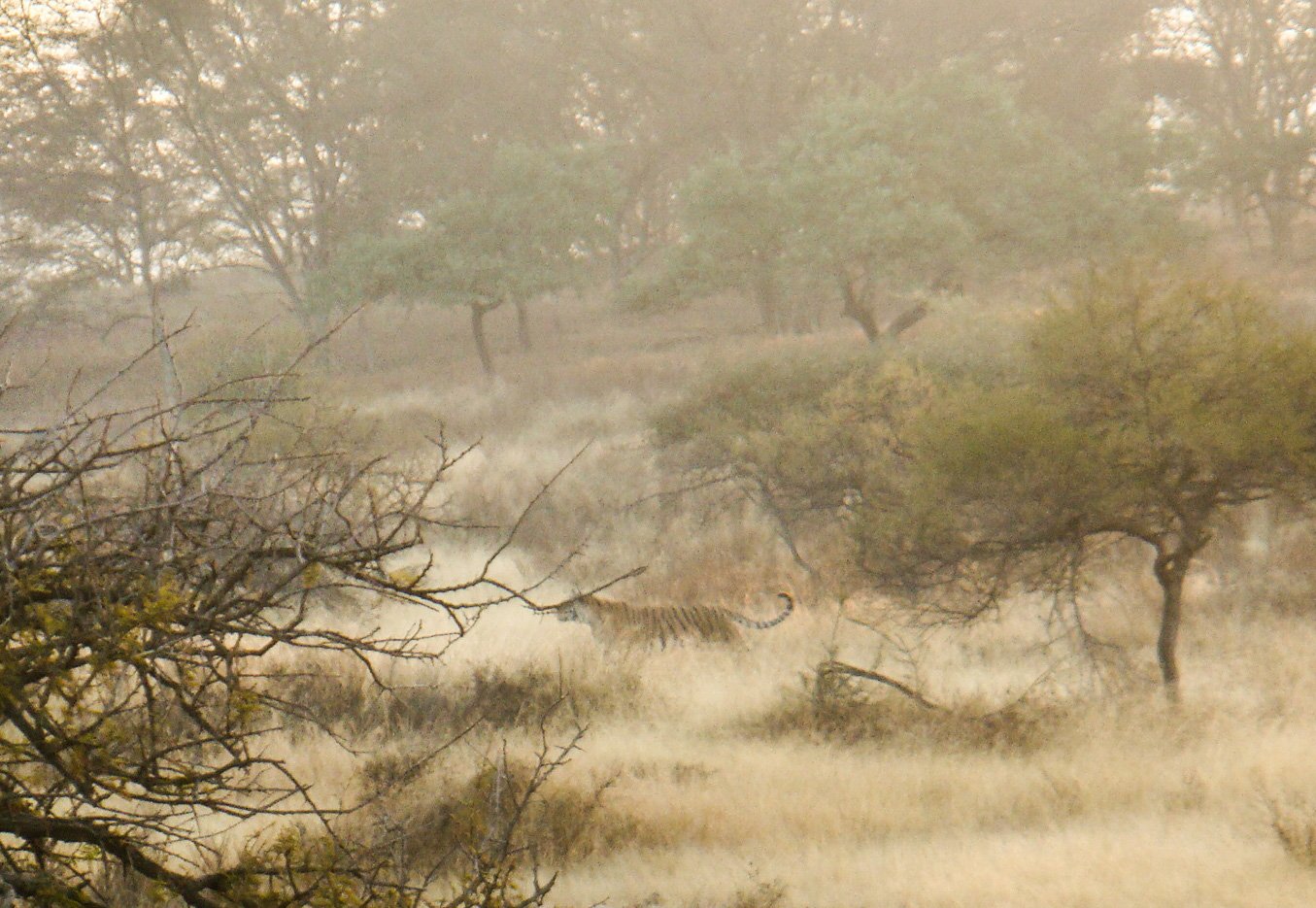 Close to the main lake, Padam Talao, our guide asked the driver to stop. The engine died, with the forest hum taking over our ears. He had picked up on the alarm call of the deer. Once pointed out, it was a discernible long, low, bark or grunt.

Other tour company jeeps and trucks briefly stopped to see what we were doing, as they passed by.

But our guide was right to stop. It was just a flash of deep orange at first, on a slope a few hundred meters away. Over the course of ten minutes or more, our tiger weaved a casual path through the dry grasses, coming into and out of view.

His casual meander had a nonchalant slink; the air of confidence that becomes only the park’s prima predator. Well, he may have thought he was. The deer had long since scattered though other more feral wildlife were arriving. Soon all the trucks and jeeps had congregated around us, penning us in, obscuring our uninterrupted view. 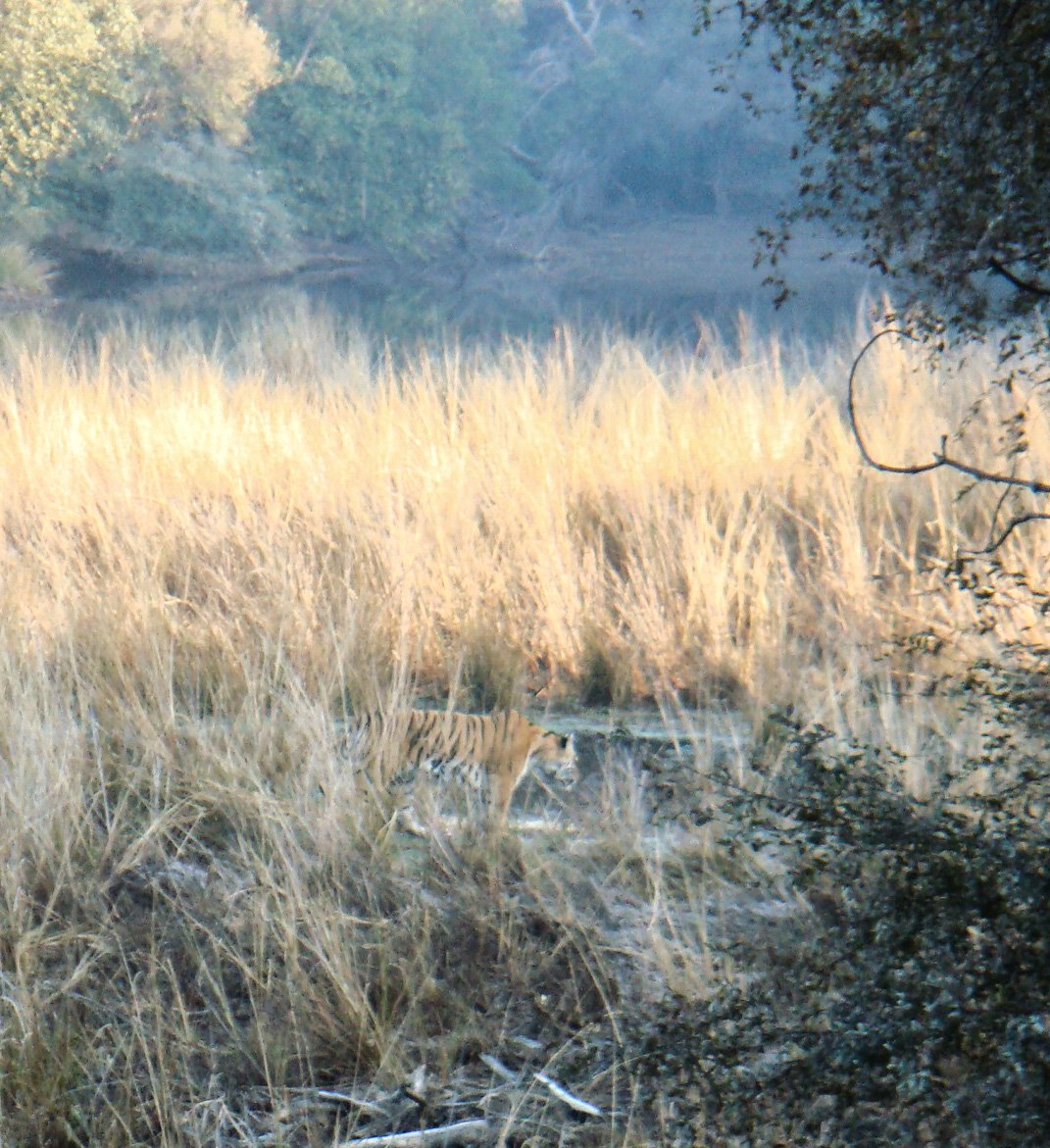 Our driver and guide sensed the animal would soon be lost to the long lakeside grasses, and with it any chance of a handsome tip from us, his photo-less passengers. Our engine started and gears crunched, to shimmy into a better vantage point. The indignation from the other tiger tourists was swift, disparaging, and provided in numerous languages, as if they had been the paradigm of tiger watching virtue in the minutes before.

Fortunately, our tiger thought nothing of it all. His nonchalant and majestic stroll along the lake’s edge was the last we saw of him. He was clearly king; the most relaxed of all of us.

The most territorial animal in the park he was not, however. They resided on four wheels, not four legs, determined that their moment, their enjoyment, and their photographs should not be compromised.