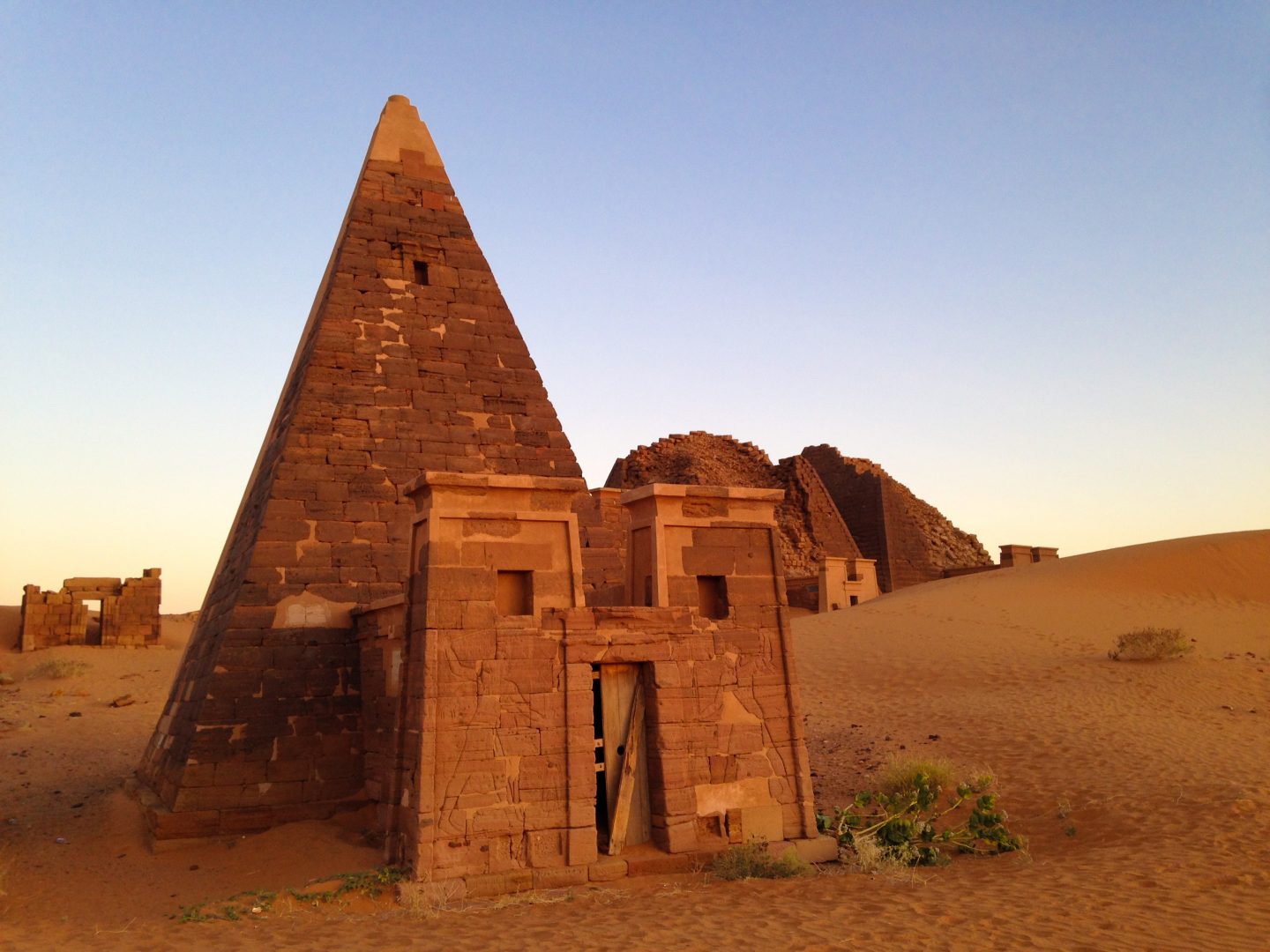 There are more pyramids in Sudan than there are in Egypt, yet there are infinitely less tourists visiting them. I went to take a look at what the distinct lack of fuss was all about.

The most famous pyramids in Sudan are arguably those in Meroë, hidden away some 200 km from the modern day capital of Khartoum. Once a thriving manufacturing city in the Kushite Empire, Meroë’s reign lasted from c.800BC to c.350AD. Trading iron, pottery, textiles and jewellery, with the Middle East and Asia, Meroë was once a metropolis of significance. Unlike today, it was a green and fertile region, bounded by the Nile and able to sustain a large populace. 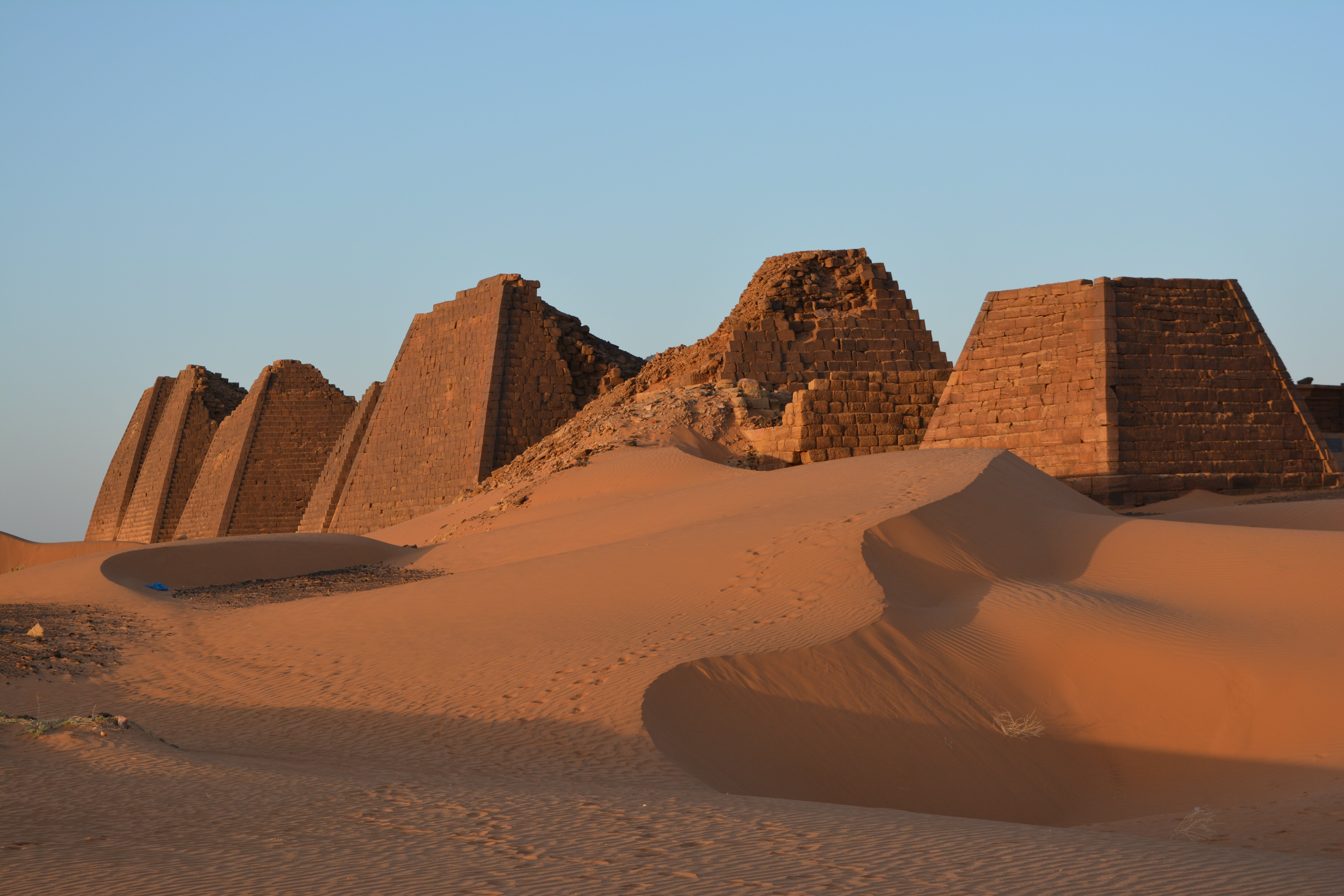 Arriving at dusk, we passed a couple of forlorn trinket sellers, bundling up their wares for a slow dusty amble home. We clambered up the hot pinky-orange sand dunes. The expanse of the site was ours alone but for one western tourist and local family weaving their way back to the entrance.

Over 200 pyramids are situated in three groups across the site, though many are now buried in the shifting sands and / or in ruins. Built some 800 years after those in Egypt, Meroë’s Nubian pyramids are smaller, with an engraved portico entrance.

Having survived intact until the 1880’s, Italian grave robber Giuseppe Ferlini evidently did not favour the front door route and used dynamite to blow holes in the tops of the pyramids to gain entrance and relieve the dead inhabitants of their precious possessions. As a result, from a distance, the ruins are often compared to a row of jagged teeth. 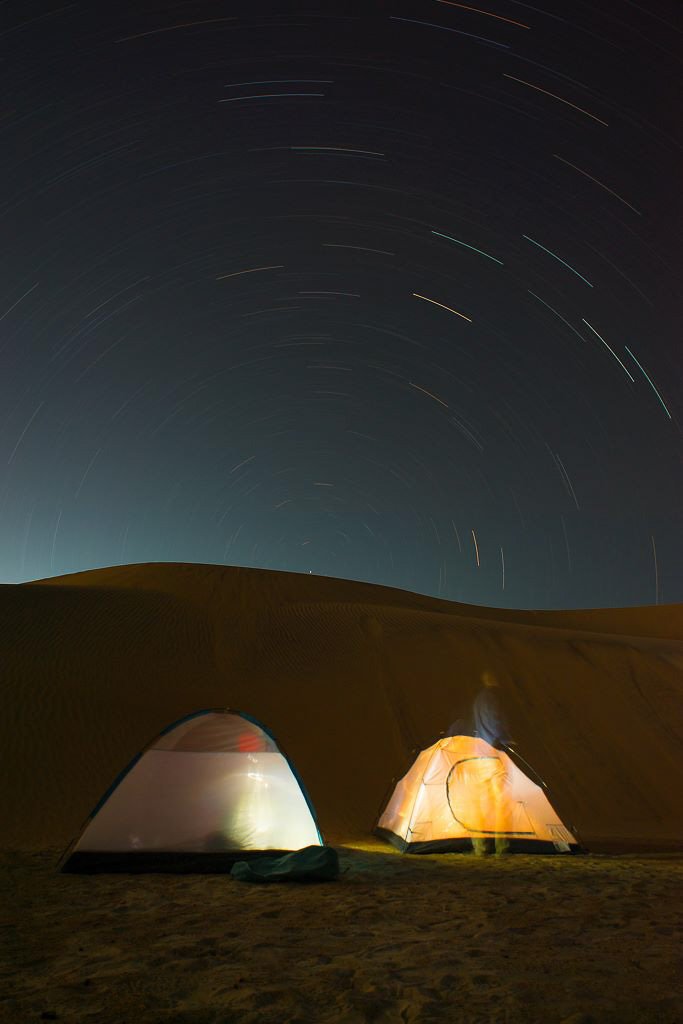 As dusk turned quickly into moonlight, we walked a kilometre through to the other side of the site. Tucked below an incline of sand dunes and rocks, our driver, Saif, had parked up and started on dinner. We erected our tents, or at least just the inner part, for so warm were the nights.

With feet dug into the still hot sand we dined, as we did every night with Saif cooking, on barbequed chicken, flat bread and salad. Exhausted and dehydrated from the day, we slept early and deeply. Above us, a cloudless night sky provided an inspiring tapestry of stars.

The sudden chill shortly before dawn woke us abruptly. Sleepy eyed, we wandered up and into Meroë. Accidently heading in different directions, we left each other to explore in their own moment of solitude. As I walked through the tumbled ruins in the absolute silence, it was hard to imagine the same dawn two or three thousand years ago: the hustle and bustle of people, the sounds and smells of a new day dawning.

I settled myself into the sand, as the sun’s rays gradually took hold of the pyramids, casting away the cold shadows of early dawn. But for the sun rising, time stood still. For a fleeting moment, sitting in an expanse of desert among tombs over two thousand years old, I sensed a feeling of great and reassuring insignificance. A moment when you realise the folly and futility of much of your daily cares and worries back home. 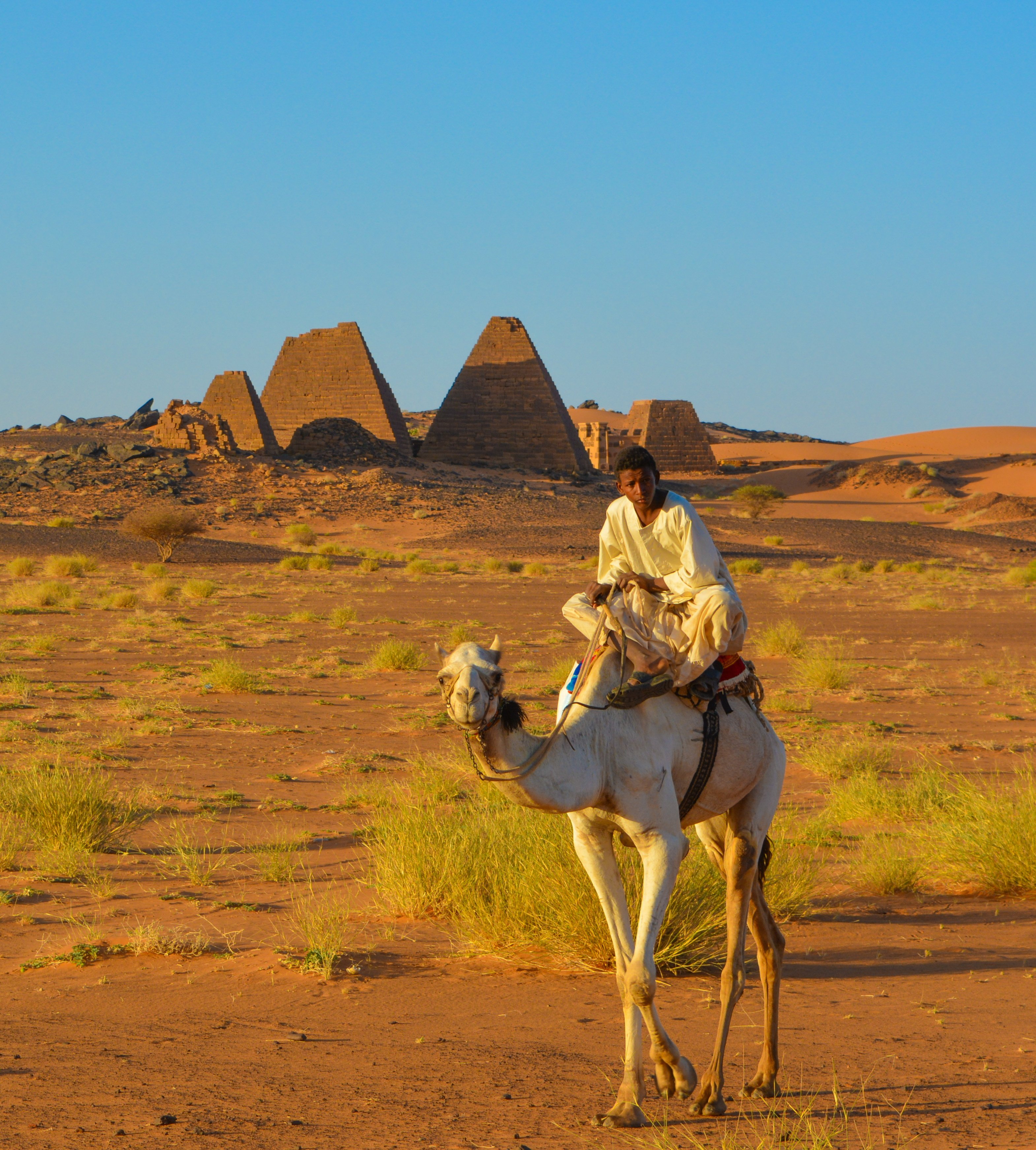 I was roused and distracted from my thoughts by a young lad sauntering by on a camel. Mundanity took hold once again and I realised I was hungry and that Saif might have put the kettle on by now.

Traipsing back through the sand dunes, it was clear to me that Meroë is still a special place with a real presence that has transcended the millennia. You will find impressive pyramids but you won’t find anyone else visiting them.

Go, and go now, before Meroë attracts the fuss that it deserves.