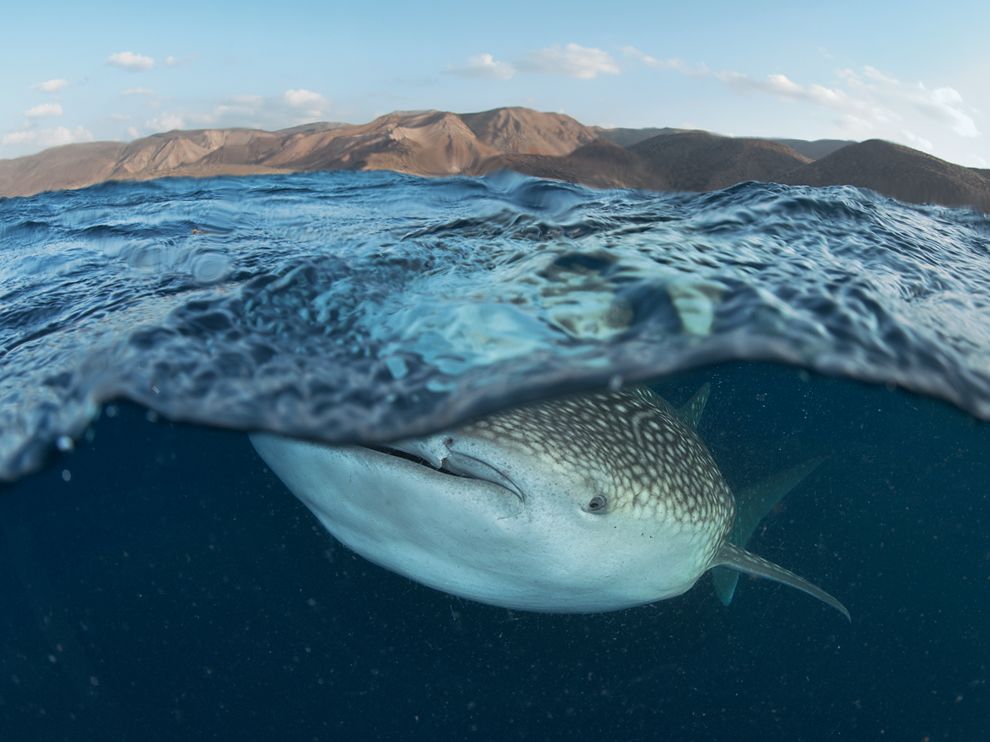 Playing hide and seek should not be that hard, not even with a bunch of wily adolescent males, and certainly not when they are over three metres long and weigh in at at least couple of tonnes. It is not, of course, quite so straight forward when they are whale sharks, roaming and feeding at will on the abundant plankton in Djibouti’s stunning Bay of Ghoubet.

For as long as the generations of local fishermen can remember, these huge placid creatures have basked in the warm Winter waters, from November until February. Sheltered by the bay, they slowly swim, mouths open, filtering gallons of sea water for the tiny plankton on which they survive.

If the guidebooks are to be believed, ‘you are almost guaranteed to see whale sharks between November and February.’ Keyword: almost. Dolphin Excursions, the French owned dive company and arguably most reputable in Djibouti, run daily trips during the peak viewing season. I joined their dhow on a Saturday in early January.

Meeting at the end of the busy Port de Peche at 7am, a diverse group of 25 eager whale shark snorkellers convened. Some were working in Djibouti, others visiting from nearby countries and others, like me, having come from afar. 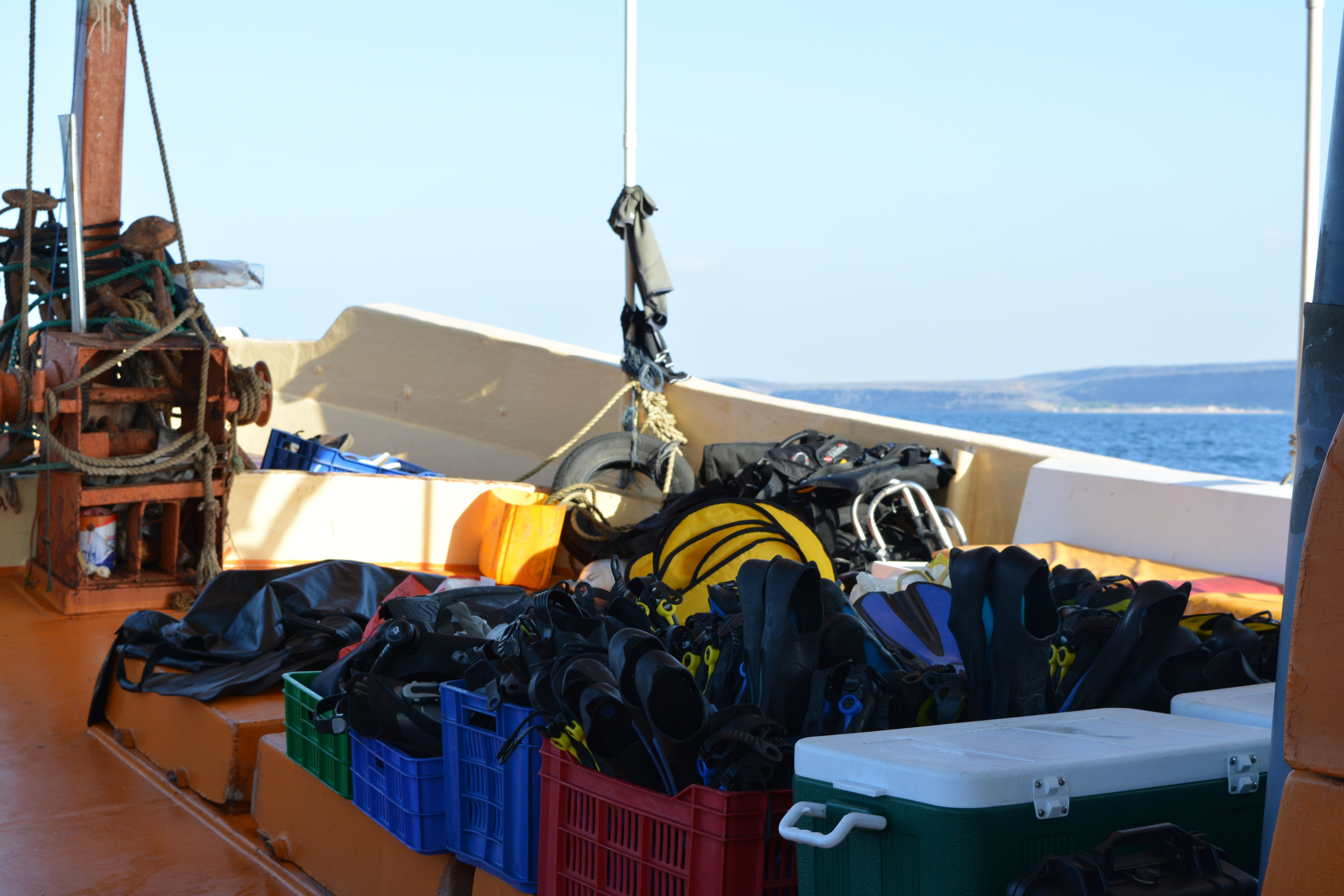 Reassuringly spacious, on the main deck of the dhow was room for plastic crates of snorkelling and diving gear, cool boxes of water and beer, a wheel house inhabited by a smiley, pot bellied captain, an oil drum barbecue at the bow, and a toilet over hanging the stern. Above the main deck was a smaller seating area, much like an Arabian saloon, with rugs on the floor and bench cushions for sitting on and leaning against, shaded by a mesh awning. 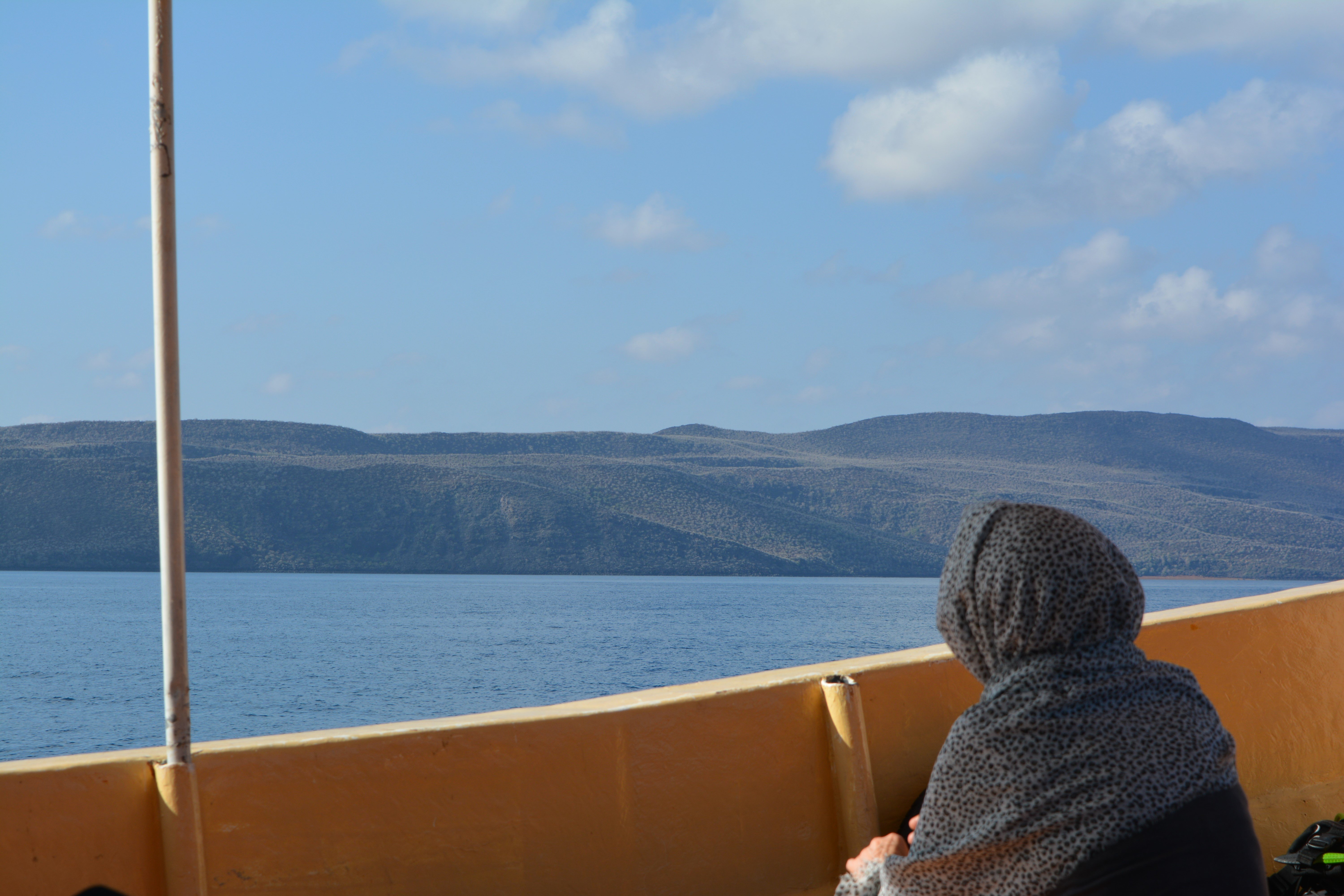 After an initial welcome briefing from cheerful and deeply tanned Sonja, a walking advert for Djibouti’s great weather, we set sail. With two skiffs dragged behind us, we carved a path through the deep blue waters, passed the enormous cargo ships docked in the main commercial port; a significant source of the tiny country’s limited income.

Under blue skies and caressed by a warm humid breezed, we followed the rugged and dramatic coastline: dark brown, parched rocky mountains tumbling into the rich blue sea, occasionally punctuated by the flash of a stunning golden sandy beach. Some two hours later, we anchored up at idyllic Ras Koralie.

Separated into two skiffs and kitted out with masks, snorkels, and flippers, and lathered up in sun screen, our search began. 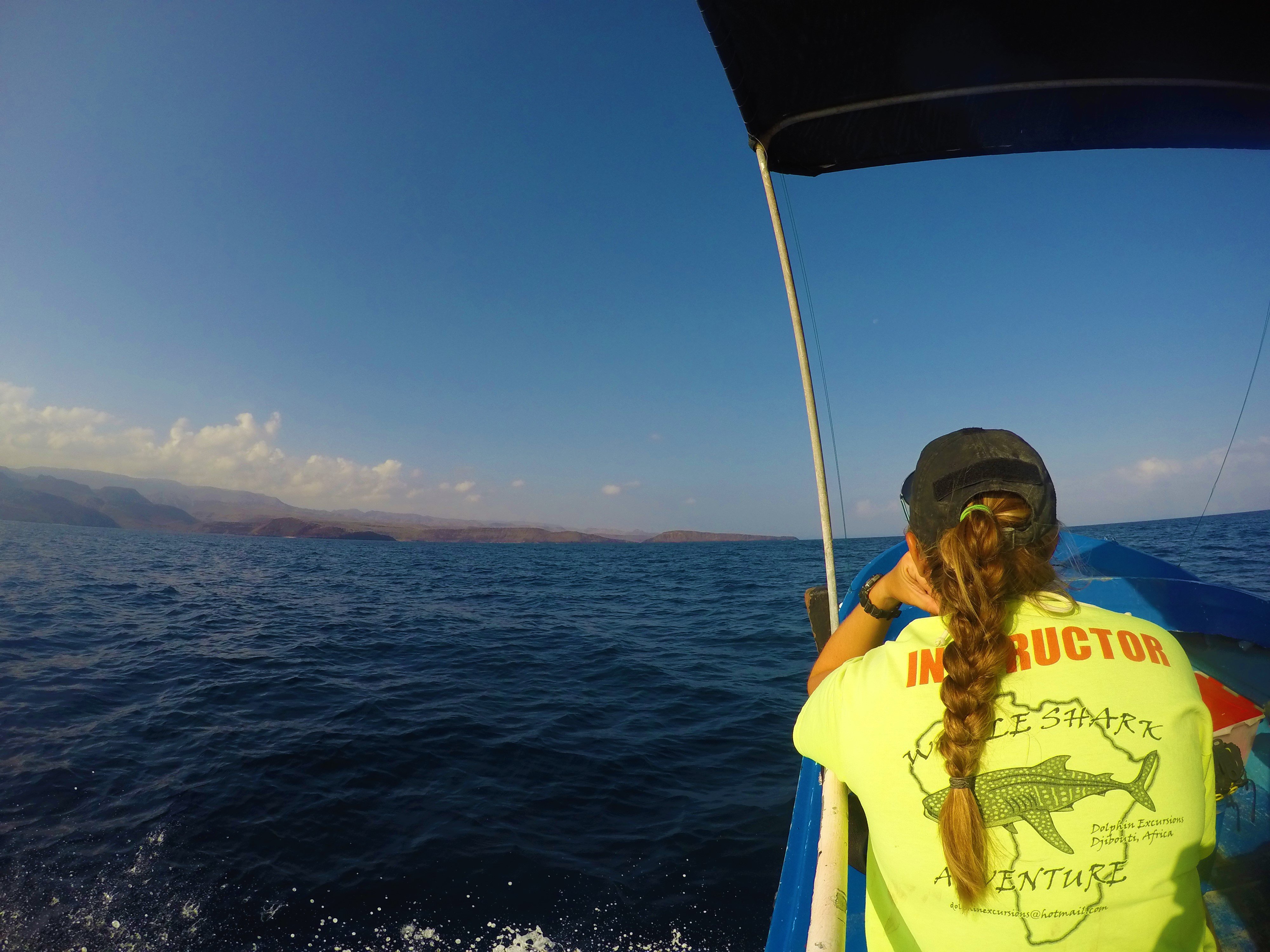 Crawling up and down the stretch of coast known for sightings over the previous months and years, all eyes were peeled. We spotted turtles, schoals of fish and a disputed sighting of a dolphin. No tell-tale huge shadows under the water, however. No little black fins poking out through the flat seas. No whale sharks.

For an hour we continued the fruitless search, though in the warm weather and with a scenic backdrop, I was happy enough. My mind wandered and I imagined the sharks happily feeding elsewhere, casual, relaxed and undisturbed. I can’t help but think these wily creatures, with the whole expanse of the Bay of Ghoubet and beyond at their disposal, would stop frequenting the strips of shore often frequented by pesky humans in masks and snorkels trying to take a ‘selfie’ with them. 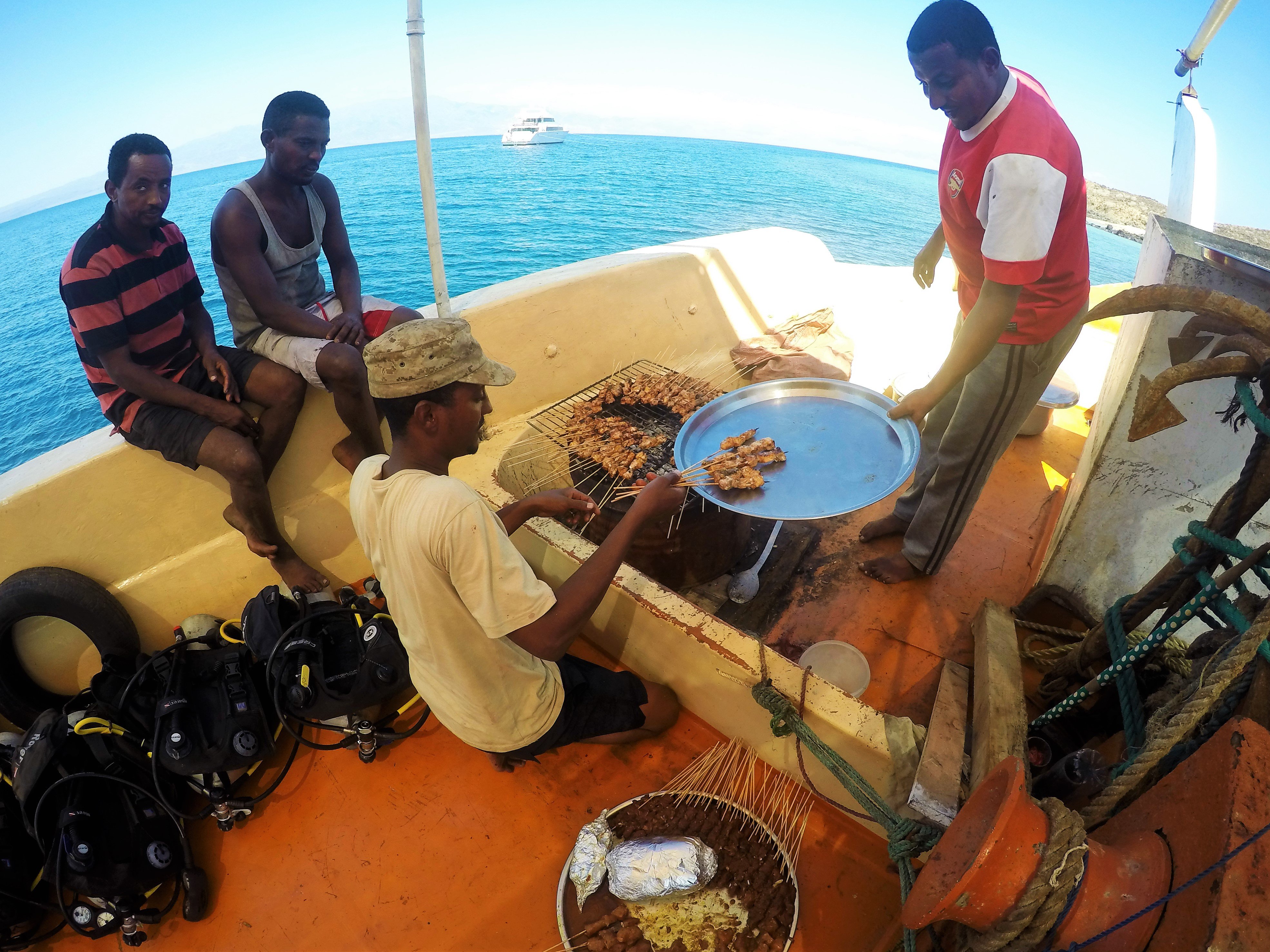 Unsuccessful, we returned to the dhow for a brief cooling dip in the sea and a surprisingly impressive lunch: mountains of salad, French bread, pasta and Bolognese, and barbecued fish and beef skewers. Fruit, tea, cookies emerge afterwards. With the sound of the sea lapping against the hull, surrounded by blue and turquoise waters, it was an unexpected moment to savour. 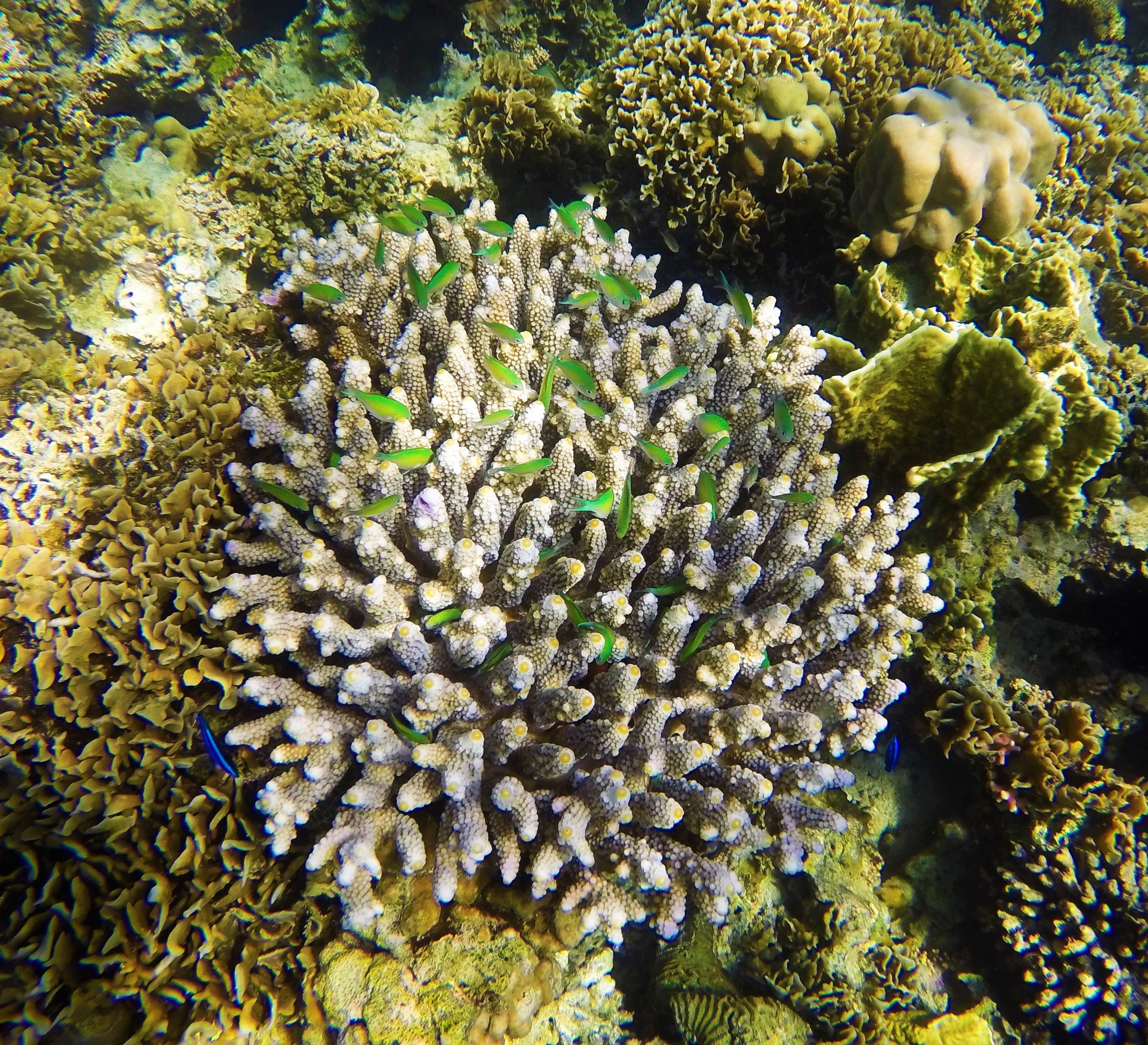 Back in action, I had chosen to scuba dive in the afternoon. Warm enough not to need a wet suit, irrepressible Sonja led us to c. 18 metres depth on the reef wall. With good visibility, we took a leisurely 50 minute dive along the reef, catching a different view to the snorkellers above.

The large fan corals provided fodder and hiding places for colourful schoals of fish, the odd ray, and a turtle or two. So dense was the scenery with colour and action, it felt much like a giant artificial aquarium, though this was, of course, the real deal.

After a brief decompression stop, we were at the surface, and soon aboard the dhow. Once the full complement of divers and snorkellers was confirmed, we weighed anchor and headed back to port. The afternoon waves are appreciably rougher, though were made light work of by the dhow.

I lounged happily on the main deck, sipping a cold beer from the cool box, as a raft of towels, t-shirts and swimming costumes, strung from all points, fluttered drying in the breeze. Eventually Sonja did the rounds, collecting up the $110 for the trip, plus $50 for the scuba dive: expensive perhaps but an equitable price for some indelible memories.

By 5:30pm we were back in the bustling Port de Peche. The whale sharks had been untroubled for another day and, actually, I was OK with that. I had had a great day in and on the water, I had been well fed and watered, and explored a new and vibrant part of the underwater world.

Whilst I had not become acquainted with several tonnes of whale shark, they were out there and I hoped that, in our absence, they too had had a similarly memorable and enjoyable day.