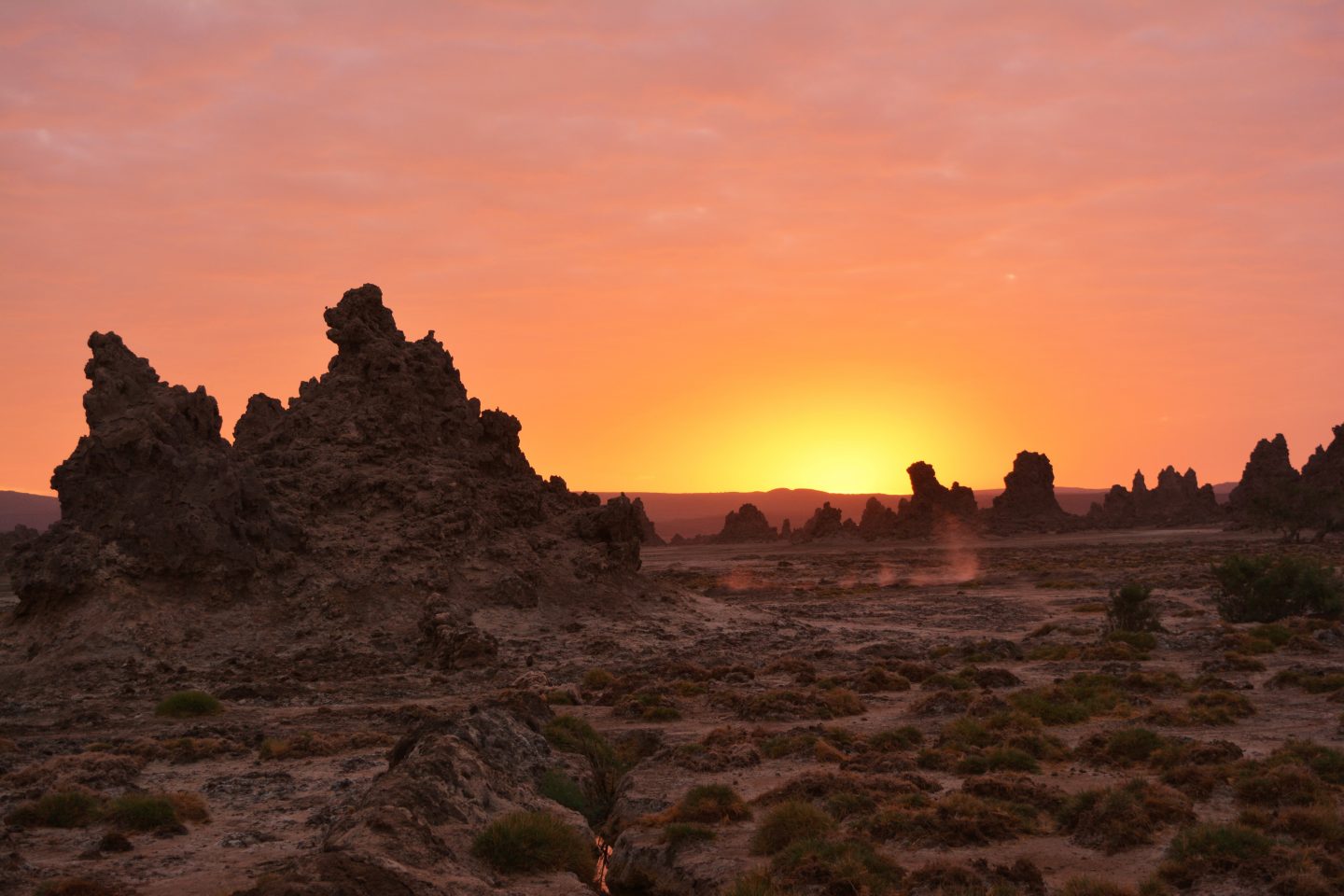 Arriving precisely nowhere, our tarmac road out of Djibouti would eventually come to a juddering halt, petering out in the middle of the desert.

We had followed the convoys of articulated lorries, hauling goods from Djibouti’s huge port, out of the city. Crossing the barren desert depressions of Petit Barra and Grand Barra with us, they eventually peeled off, heading towards Ethiopia.

We had other plans. Our destination was the topographical wonder of Lake Abbé. Straddling the border between Ethiopia and Djibouti, its ‘other-wordly’ rock formations would not yield to anyone less than an adventurous soul. 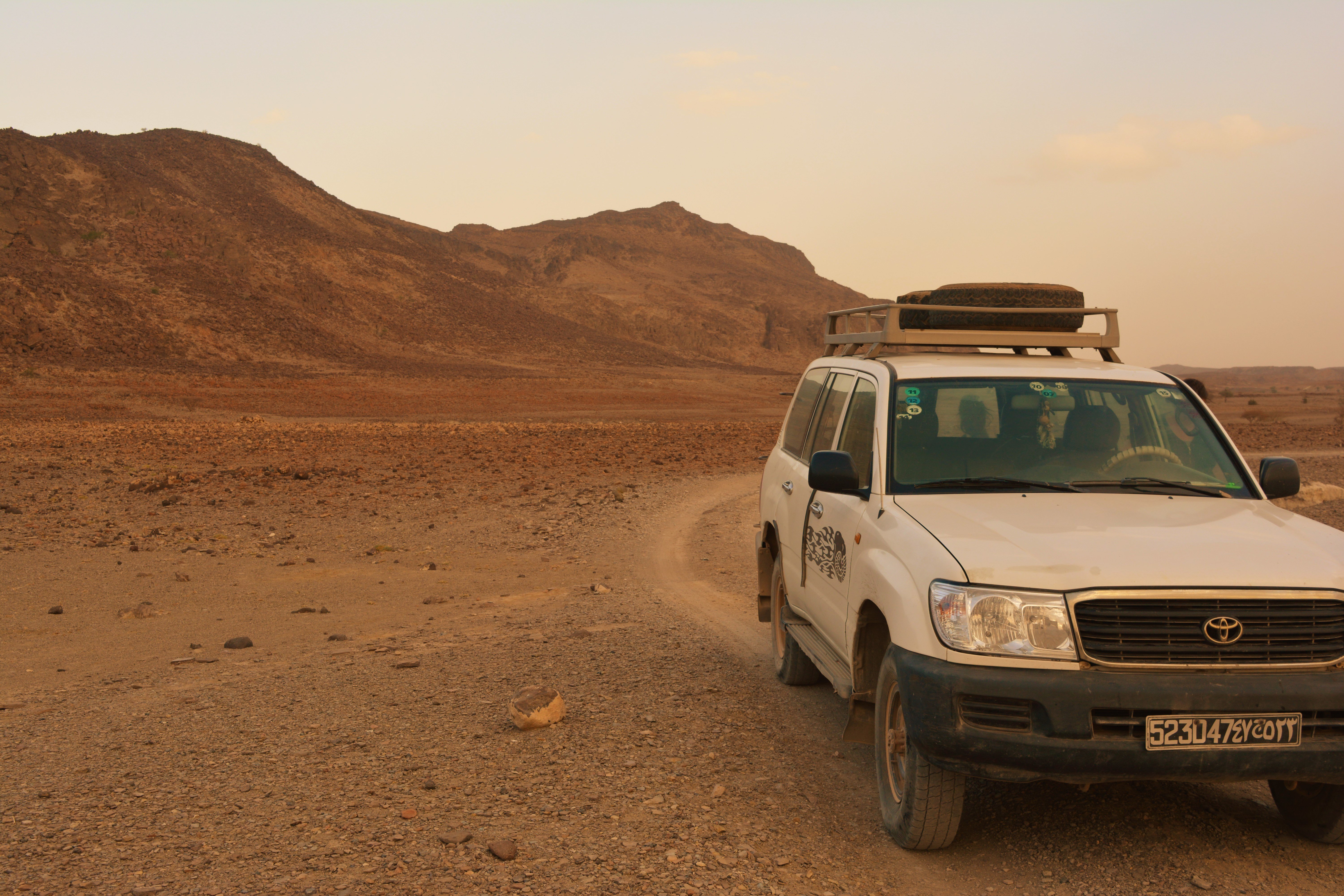 Before the road ran out of tarmac, we veered off into the sand and shingle, across dried river beds, occasionally sliding and slowing in the soft sands. The odd itinerant ostrich and gazelle jogged by, seemingly unimpressed and unperturbed by our presence.

Our driver grew up in the dusty village of As ‘Ela, isolated and enroute to the lake, where we stopped briefly. Some brick houses, some more shanty in nature, the children smiled and played, as the elders preferred to be seated in the shade. Whilst the heat is not brutal in the Winter, it is for most of the year and their old habits therefore die hard.

Some hours after leaving main tarmac road and as dusk set in, we entered a most bizarre field of grey – brown limestone ‘chimney’ stacks. Wide at the base and rising steeply to a peak, they reminded me of the wax remnants from multiple candles burned to stub in the neck of a wine bottle; textured, contoured, and un-evenly distributed. Some rose a few feet from the ground, with the highest at 50 metres tall. Akin to a sparsely populated forest, we weaved our way passed each copse of limestone ‘chimneys’.

The reference to chimneys is deliberate. The Afar depression, in which Djibouti neatly sits, is the site of three tectonic plates parting. As the seam of two plates pulls apart, the crust thins until cracks emerge. Magma escapes and heats underground water. The water boils, forcing its way to the surface. Cooling on hitting the atmosphere, or under the sea as it was thousands of years ago, the water deposits a thin layer of previously dissolved calcium carbonates. Slowly, this builds up the chimney stacks out of a limestone rock known as travertine (or so I am reliably informed). The escaping steam makes for a chimney-like appearance. 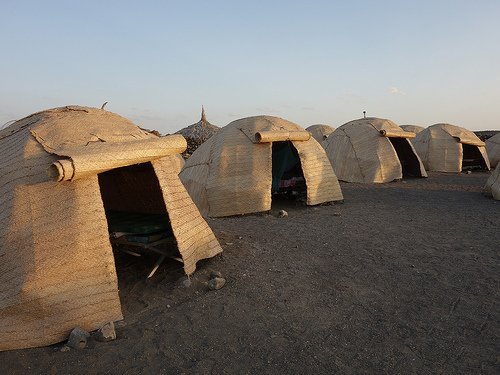 A weird and desolate place, there is only one encampment for tourists. They offer basic versions of traditional Afar huts: a wire dome frame with a single layer of matting atop, simple bed frames with an equally simple mattress and a mosquito net. Even in December, the wind was warm and the lack of insulation not a problem.

The largely candlelit dinner at the camp was hearty and filling: salad, baguettes, and spaghetti Bolognese. A hot urn of cardamom tea washed it all down well.

The camp rose en masse for a 6am start. The various 4x4s weaved down into the copses of chimneys to catch the sun rising behind them. Few of the chimneys seemed to be bellowing but there were plenty of pools of hot water bubbling and boiling to the surface, giving off trails of hot steam.

Our driver amused himself, lighting his cigarette on the rocks around the boiling water, for so hot were they. The few local farmers have a more practical use for the hot springs. Digging channels in which the water runs and cools, they can irrigate small patches of land, either for crops or grazing their goats. It appeared unsatisfactory for both but in this harsh environment you just made the best of it.

Navigating the spongy and occasionally muddy flats, we snaked a path towards the lake. It has dramatically receded over preceding years due to damming of its tributary, the Awash River, and relentless irrigation from the Awash and the lake itself.

The large flocks of beautifully pink flamingos didn’t seem too fussed. They stood, pecking away in the saline waters, some distance from us. We were separated from them by apparently treacherous quick sands. Perhaps our guide had just got hungry and tired from the early start but were not going to risk it.

As we departed, we navigated the same sand and shingle tracks for the same hours it had taken to get there. But where else would you experience the extraordinarily odd and enchanting Lake Abbé than hidden in a hot and barren corner of Africa: a magnificent reminder that where the road ends, the real journey begins. 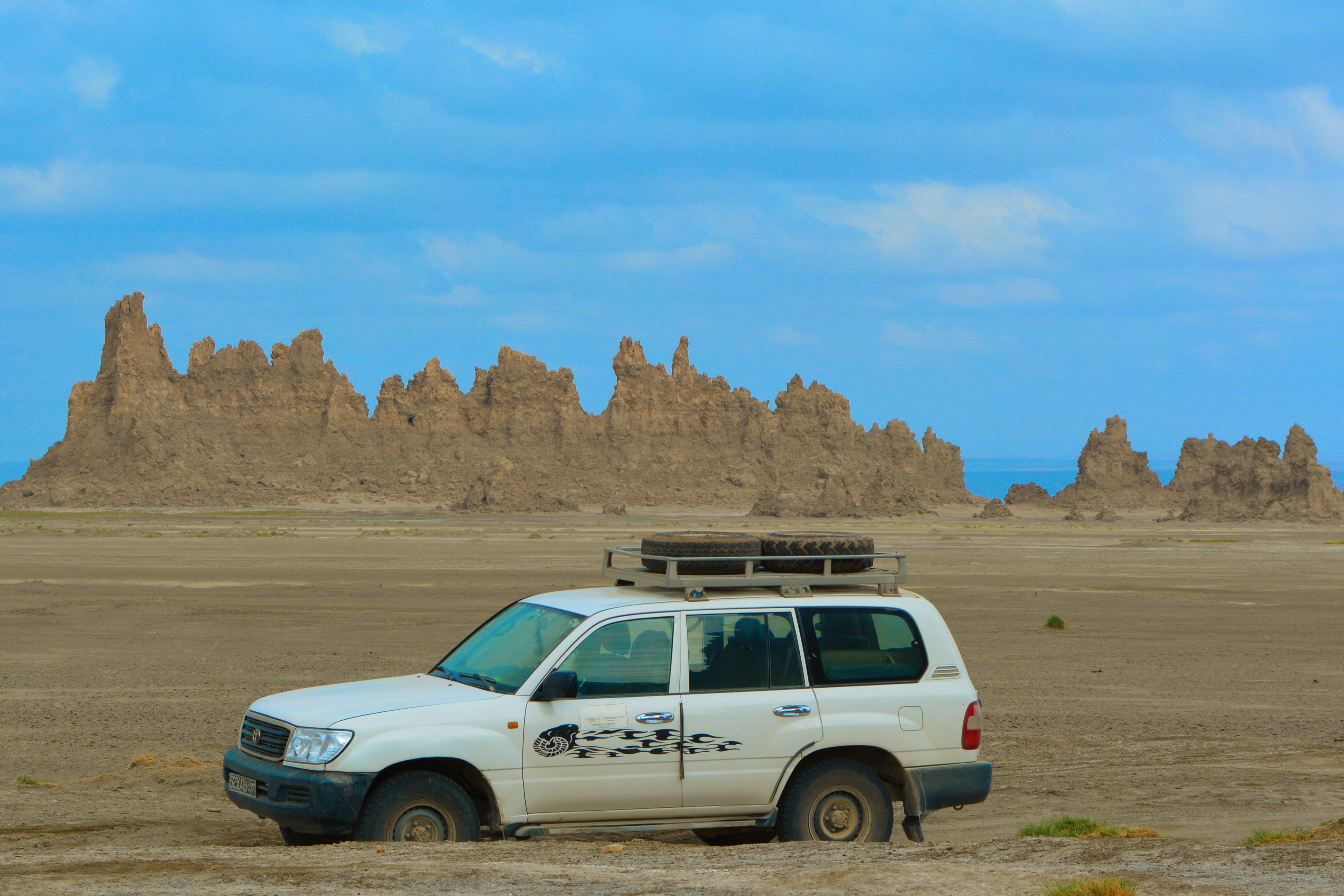 There persists a wonderful myth that the classic 1968 Charlton Heston film, “Planet of the Apes,” was part filmed in and around Lake Abbé’s eerie chimneys, propagated mainly by foreign tourists, rather than local guides. My research suggests it was filmed entirely on location in the USA and that Djibouti was still ‘refining’ its borders at the time filming was taking place. Just FYI…

The trip was undertaken at the author’s own cost and arranged with Houmed Ali at Agence Safar (safar.djibouti@gmail.com).