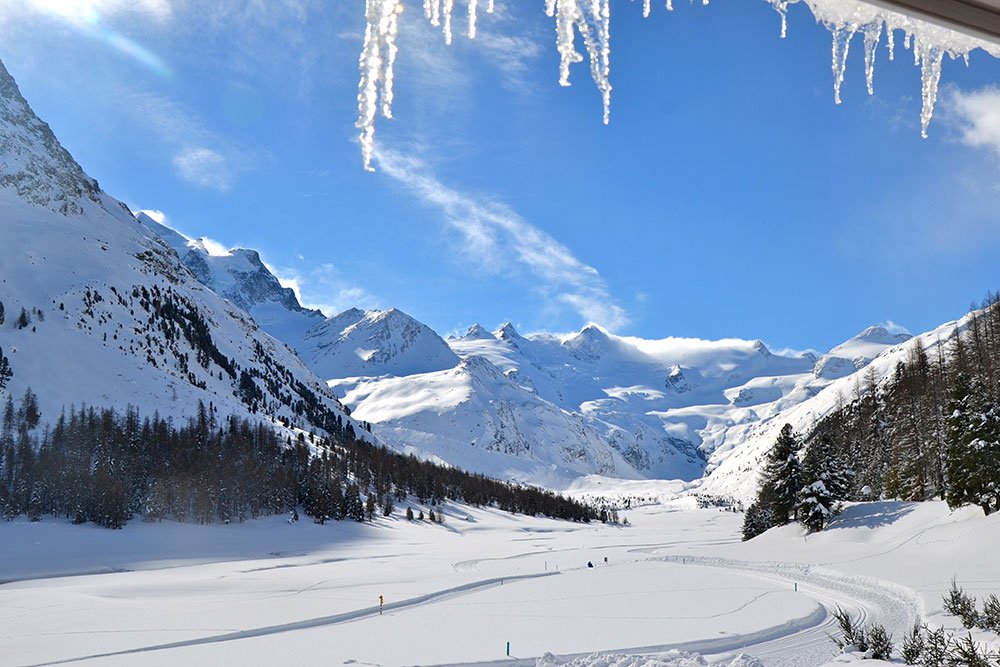 Mention cross-country skiing and I used to think of lycra clad Scandinavians at the Winter Olympics, normally with looks of utter exhaustion etched across their faces. When I accepted the challenge from a couple of friends to join them in attempting the Engadin cross-country ski marathon in Switzerland, I feared it might be the greatest sporting mistake I had ever made. 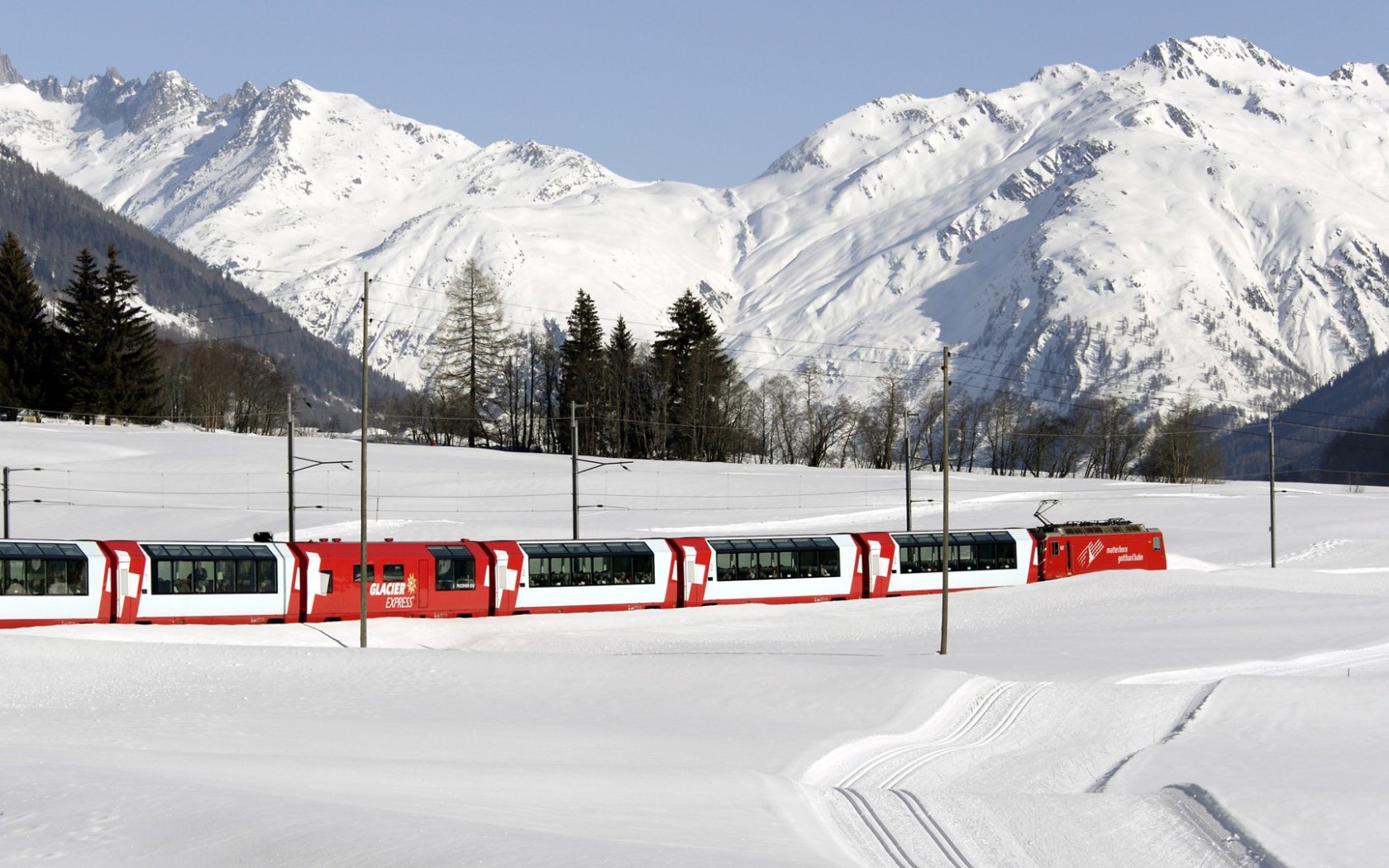 A tranquil three hour train ride out of Zurich, climbing through snowbound picture-postcard vistas to an altitude of 1,800 metres, is the Upper Engadin valley. The annual cross-country Skimarathon is one of the most popular, attracting around 13,000 participants, from elite athletes as part of the ‘Worldloppet’ series, to mere novices like us. The 42km course traverses frozen lakes, snow-laden forests and slopes of varying inclinations – both uphill and downhill.

As a complete beginner, I took myself out to Pontresina, in the midst of the Engadin Valley, five days before the race for a crash course. Like Bambi on ice, I most certainly put the ‘crash’ into crash course. With the perseverance of Christina, my irrepressible instructor from the Pontresina Ski School, I slowly gained the basics of the free-style or ‘skate’ cross-country skiing style. Unlike the ‘classic’ version, where skiers follow pre-laid parallel tracks in the snow and adopt an almost running style on skis, the skating style uses the edge of the ski to push out at a 45 degree angle sideways and propel the skier forward; much like ice skating. 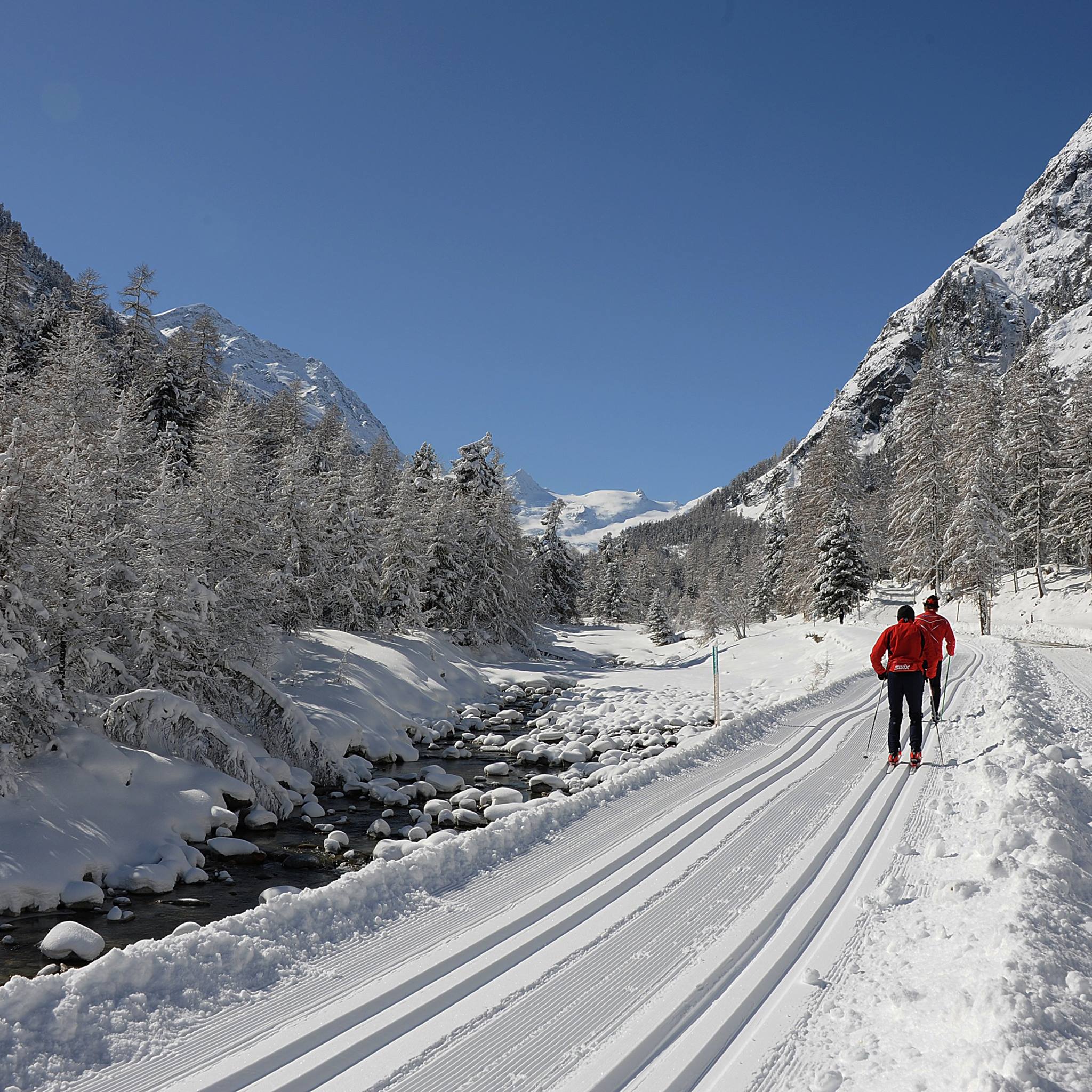 With a soft ski boot, fastened to the ski by a hinged toe and skis that are narrower than the width of your foot and two metres long, it all takes a little getting used to. I looked on in envy at the locals, young and old, who were effortlessly skate-skiing by.

When a little fluidity and momentum creeps in, there is something genuinely magical about gliding peacefully along snowy valleys, taking in lungfuls of crisp fresh air. The cross-country skiing fraternity is also a friendly bunch. A sport where one can ski a little, pop into a cosy wood cabin café for a restorative coffee and a slice of cake, and then potter onwards.

My accommodation for the duration was the wonderfully remote Hotel Roseg Gletscher, secluded 15 minutes drive up an icy track from Pontresina itself. I was quickly befriended by Bernard, a portly, red cheeked Swiss ski instructor who was hovering near, but reluctant to accept, retirement age. Each evening we would convene in the increasingly busy restaurant, as more and more skiers arrived for the impending marathon. Hearty plates of game meats were the order of the day, as were heavy red wines which, when combined with the day’s exertions, made for a sleep as deep and as heavy as the snowfall outside.

With the arrival of my fellow skiers, race day was upon us. Joining the huge mass of participants, nerves were starting to jangle. What had we signed ourselves up to? There were timed cut-off points at quarter intervals along the route and, by my reckoning, we would not be too far ahead of them. 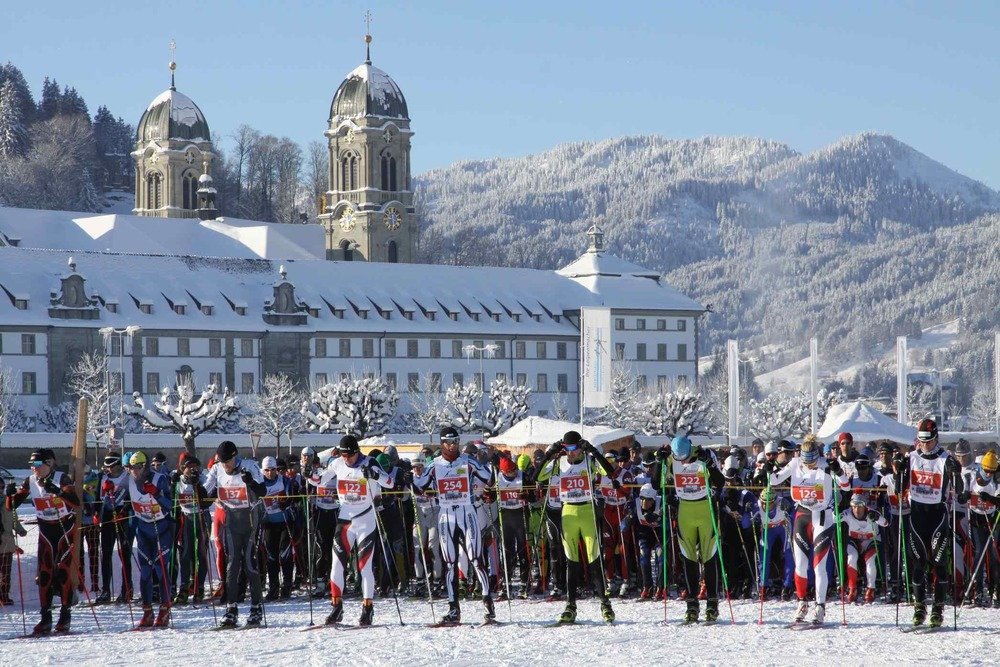 The starting line was in front of the impressive Maloja Palace Hotel, released in waves of thousands of participants, delineated on experience levels. The initial sections of the course were over the heavily frozen Lake Sils and Lake Silvaplana. Getting purchase with the edge of the skis on the ice was tricky. You know you are not doing very well, when two lads skiing and dragging a sleigh with crates of beer on it, and no doubt sampling some, go passed you. 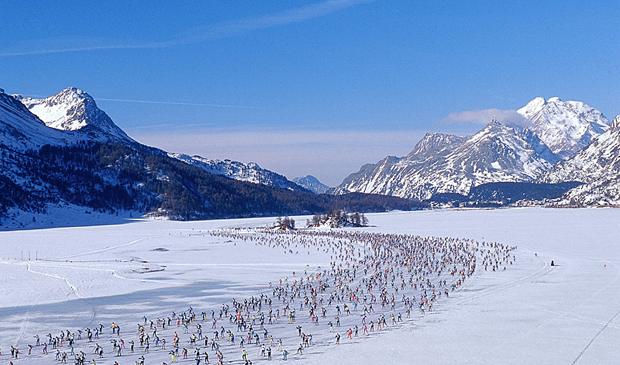 Taking to the country trail passed St Moritz, speed and spirits started to lift. A long steady drag upwards was rewarded, in the loosest sense of the word, with a steep descent. Room enough for only two or three skiers at a time to descend, a bottle neck had formed by the time I arrived there. Hundreds of spectators had gathered too, to watch. My turn came to descend.

Tucked into a crouch, leaning forward, I started to pick up speed rapidly. The deep grooves in which my skis sat were now but compacted ice. Hurtling faster than I ever had, I lost my nerve and tried to use the edge of the skis for some friction and reduce speed. My attempt at the ‘snow plough’ with my skis quickly tripped me, and I wiped out, sent vaulting and tumbling off the course into deeper snow. Gathering my skis, which came away in the crash, panic levels had reduced but embarrassment levels were soaring. I could not bare to look back up the hill at all the spectating faces looking down at me. 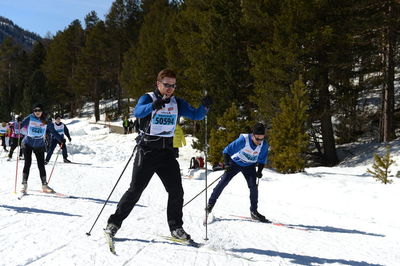 After another slow incline came another tumultuous descent called “mattress valley” – so named because the descent is so steep and through so many trees, that the trees have mattresses strapped around them to soften the inevitable blow. It is the only part of the course where novices are allowed to take their skis off and run down a parallel pathway.

Entering the half way point at Pontresina was wonderful. Not for the first time on the course, hot and cold drinks, chocolate and fruit were handed out. Cow bells rang and encouragement abounded from all quarters.

The second half of the race was equally attractive but fortuitously less eventful: crossing the flat valley bottom, climbing up rolling hillsides and through small villages. I ploughed on with gritted teeth though, so slow was I that, my fellow competitors by this stage were local teenage girls and pensioners, all enjoying a delightful amble. I, on the other hand, was straining every sinew for propulsion.

As the kilometres ticked down, a sense of exhausted euphoria crept in: I was going to do this. Lungs filled with more air, resolve stiffened. Like a drunk trying to walk straight, I was purposeful but clearly not skiing particularly well. As the final swirl of the course entered the finishing area in the village of S-Chanf, warm-hearted unknown supporters cheered me on enthusiastically as I crossed the finishing line four extraordinary hours from the start, and as if I was in first, rather than my actual 9,224th place!

Few prouder people than our little gang received their medals at the finishing line that day. If it was a mistake to accept the challenge of learning to cross country ski and complete the Engadin Skimarathon, then what a marvellous mistake it was.