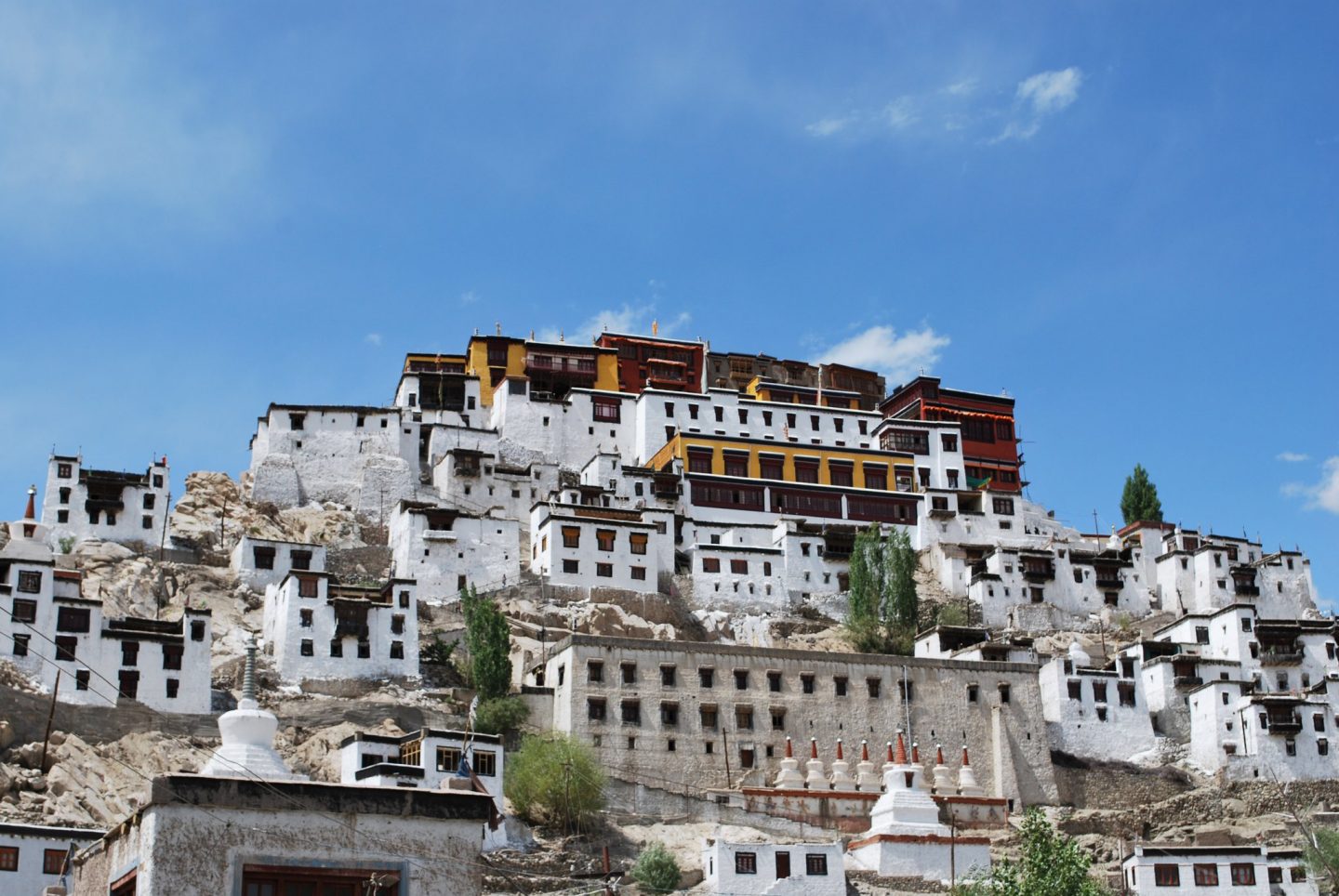 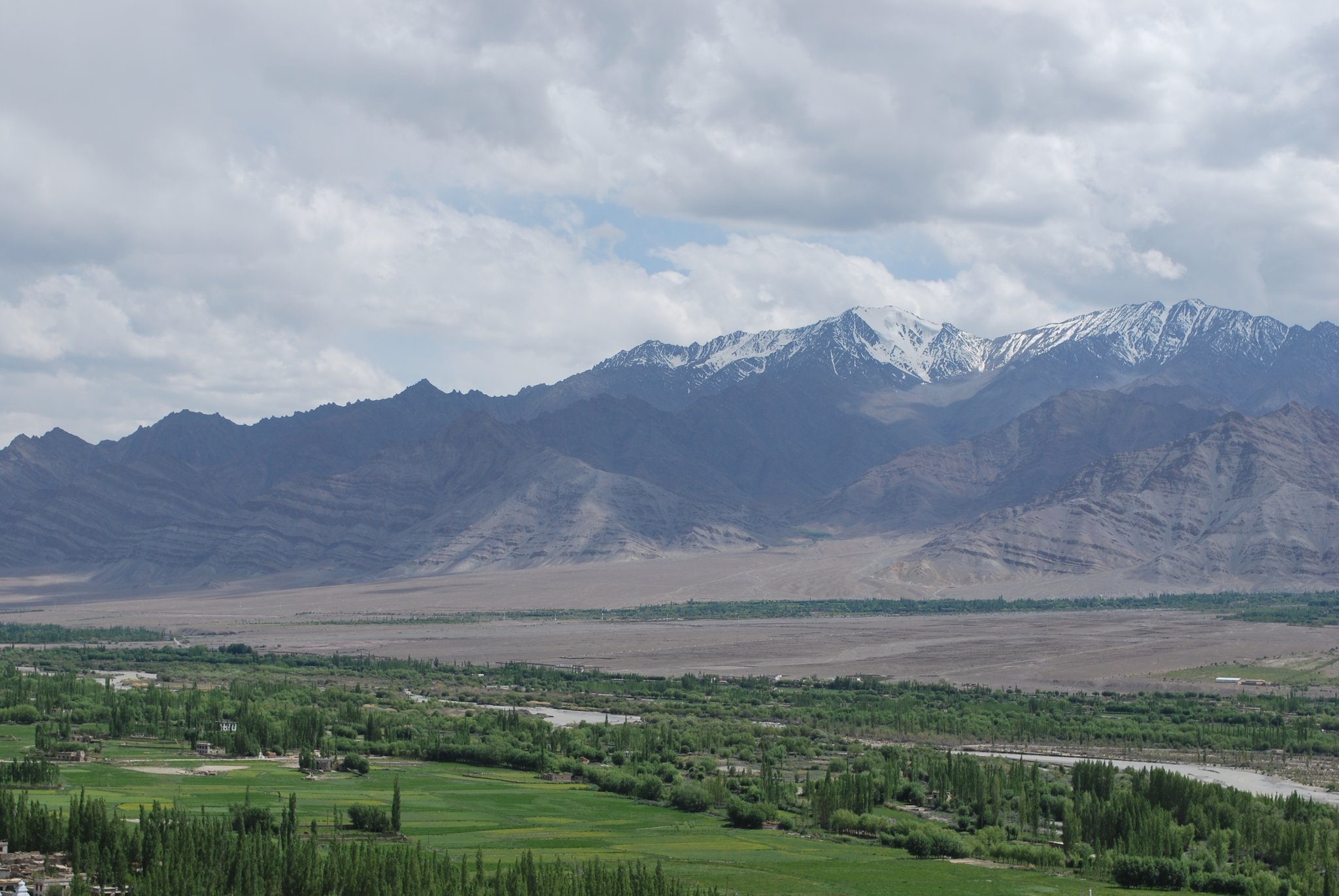 Submerged under feet of frozen snow during the perishing Winter months, India’s northerly Ladakh Valley thaws to reveal a brief Summer flourish of colour. Sitting at a cool 3,500 metres above sea level, the Ladakh Valley has been favoured for centuries by a burgeoning Buddhist community.

Oft called ‘Little Tibet,’ Buddhist monasteries (‘gompas’) dot the valley, perched picturesquely on dramatic bluffs and promontories. Drawing visitors from near and far, the greatest flash of Summer colours are witnessed at the annual gompa festivals.

I joined the steady stream of locals chugging their way out of the regional capital of Leh in a convoy of beaten-up cars and minibuses. Winding along the valley bottom, alongside the gushing river Indus, we passed the impressive monasteries at Thikse and Shey, before arriving the Hemis Gompa. 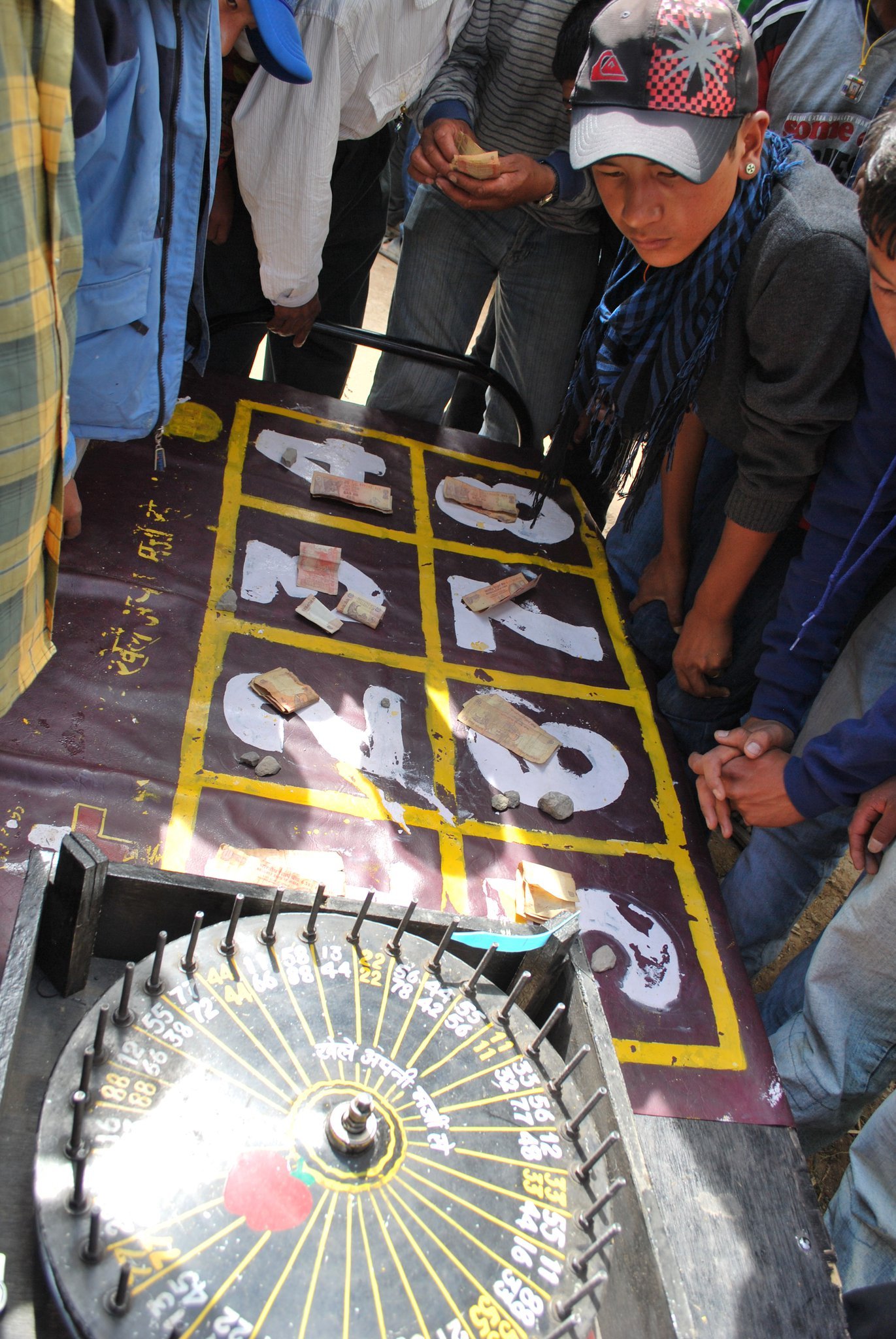 Tucked as high up the fluvial riverbanks as possible, almost into the mountain wall behind, the Hemis Gompa was already abuzz. I walked up the slope and steps, weaving through small stalls selling confectionary and drinks, Tibetan handcrafts and bizarrely, gambling tables busy with punters.

Surprisingly officious mercantile monks (‘lamas’ – as in the Dalai Lama) sold tickets at the gate, resolute to make sure you bought the right tickets (general entrance, museum entrance, camera permission slip, etc.) and strictly pointing out the areas to which you did and did not have access.

Navigating dark, narrow, busy passageways, populated by bustling lamas swathed in traditional maroon, I stumbled out into the large central courtyard. Paved with large flat stones and a flag pole at the centre, the vast majority of the courtyard was roped off and given over to the performers. 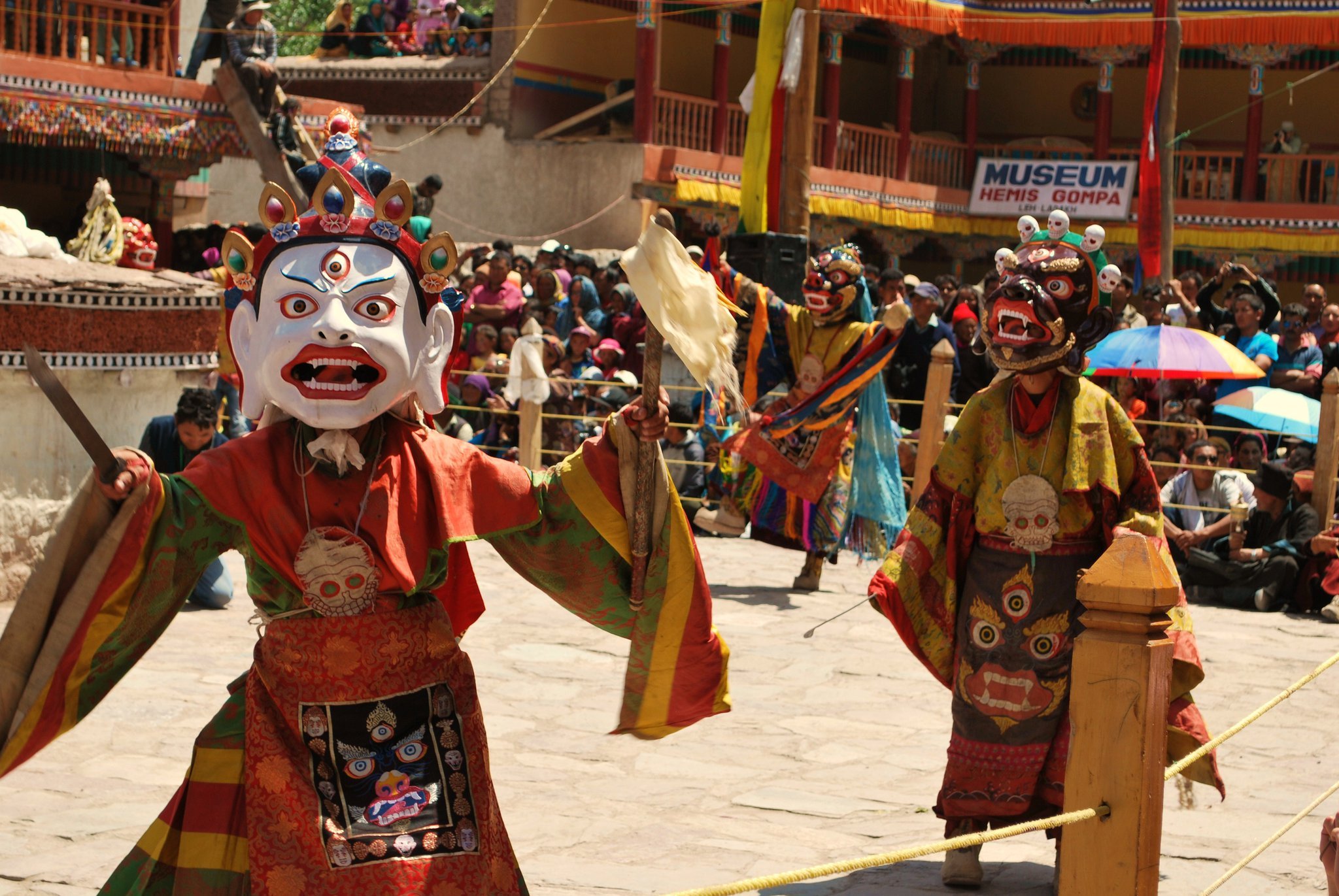 The annual vibrant Buddhist festivals, involving the spectacle of dancers in oversized masks and ornate braded costumes, are held across the region. In plays known as ‘chams’ they enact passages from Buddhist teachings in the courtyard of the revered gompas, primarily telling the story of good triumphing over evil.

Reconstructed in 1672, the Hemis Gompa, is regarded as one of the wealthiest in the region. For two days in the Tibetan ‘Lunar’ month (June or July), the Hemis Gompa hosts a festival to celebrate the birth of Guru Padmasambhava, the founder of Tantric Buddhism in Tibet.

Enclosed on four sides, every vantage point around the courtyard was taken, particularly the pride of place verandas, over head. I found myself a position in the crowds on an outside staircase, where I propped myself against a wall and tried to shade myself from the bright sunlight. 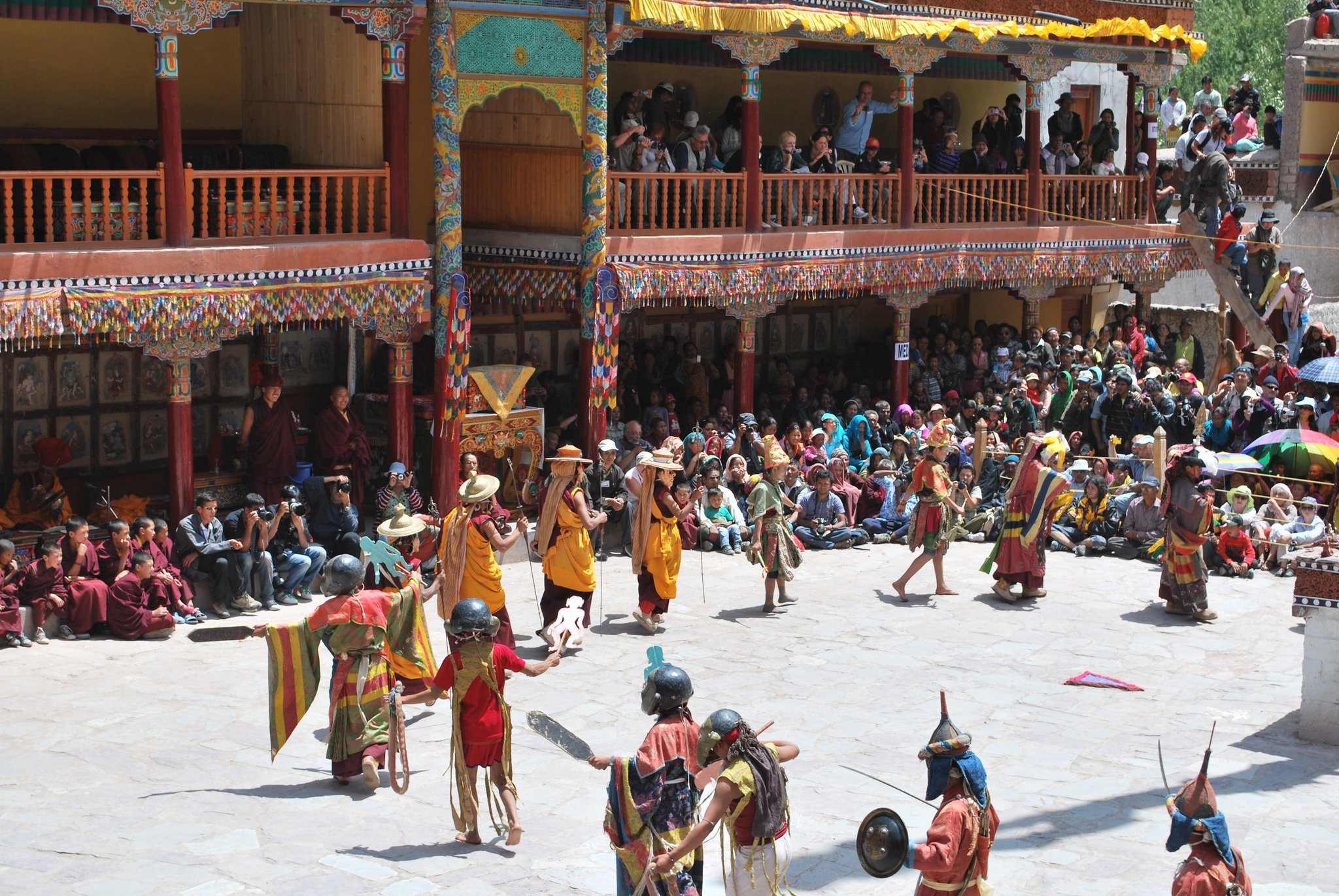 The lamas performed well-choreographed dances, hypnotically spinning, twisting and turning in their bright and braded costumes, and wearing the oversized masks. The evil characters were not hard to spot, with their dark and malevolent expressions lacquered onto the masks and occasionally, adorned with mini-skulls and darker costumes. Conversely, the hapless damsels and earnest good guys had their perma-smiles painted on and costumes attuned to whichever station they held in life.

Priests played accompanying music with traditional long horns, drums and cymbals, as the battle between good and evil was played out over two days. I was transfixed by the swirling performers, in time, in step and en masse. I was almost physically transfixed as well, given the crush of local families spectating around me. 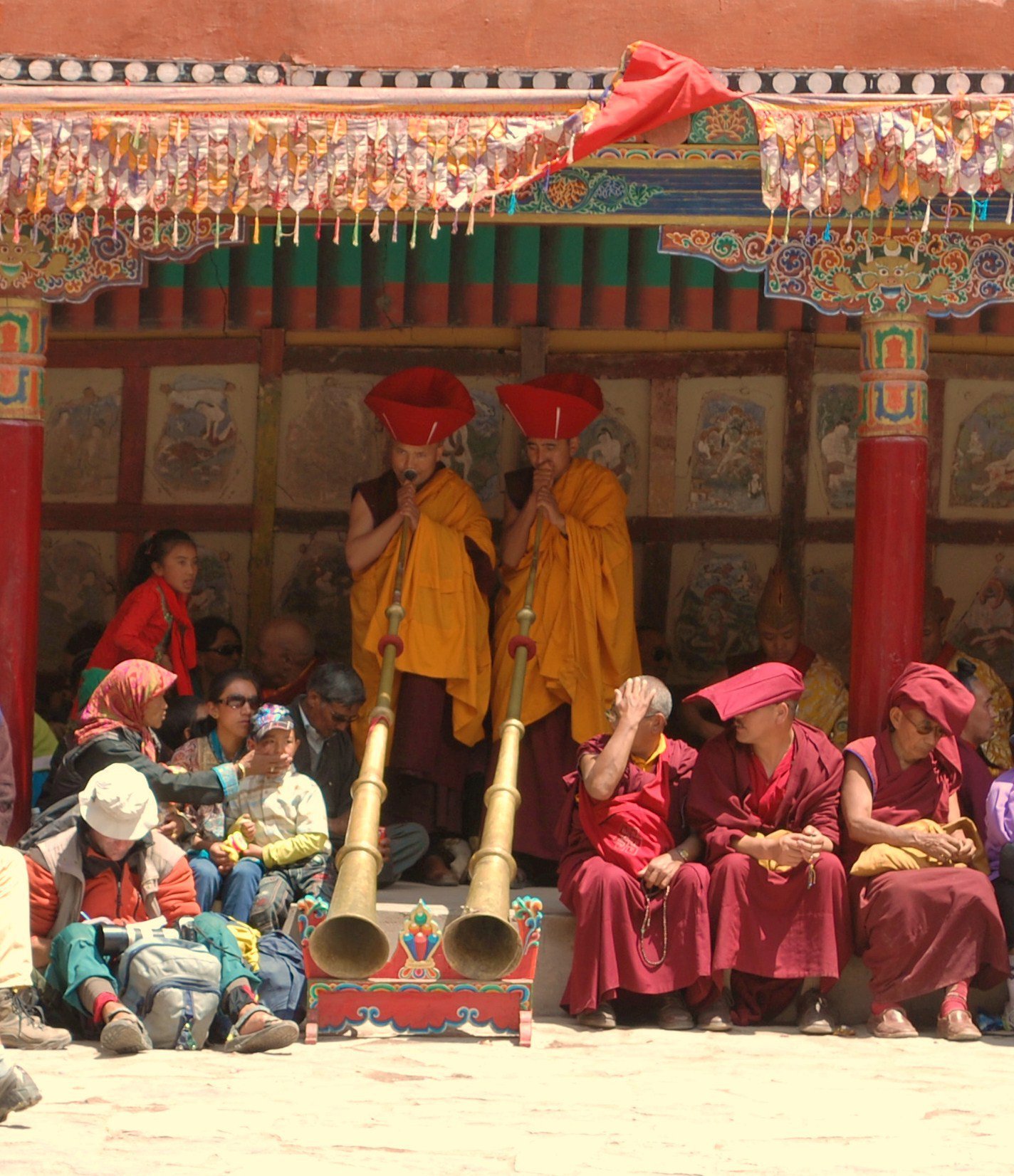 I stayed for hours, captivated but often bewildered by the story lines. The fair maidens were amusingly played by flat-footed male lamas, less than delighted with their part. The malevolent evil-doers presented a genuinely fearsome sight, circling and preying on their victims. As the festival drew to a cymbal crashing climax, I was slightly unnerved when hunks of meat were thrown onto the floor and run through with swords. Hopefully and presumably evil’s last stand, with good winning the day.

With that, I had played my small part in supporting and witnessing the spectacular, brief, colourful Summer flourish of the Ladakh Valley. With the same regularity of good beating evil in the chams performances, the snows would fall again, cutting off this remote region and its ancient culture for another year. 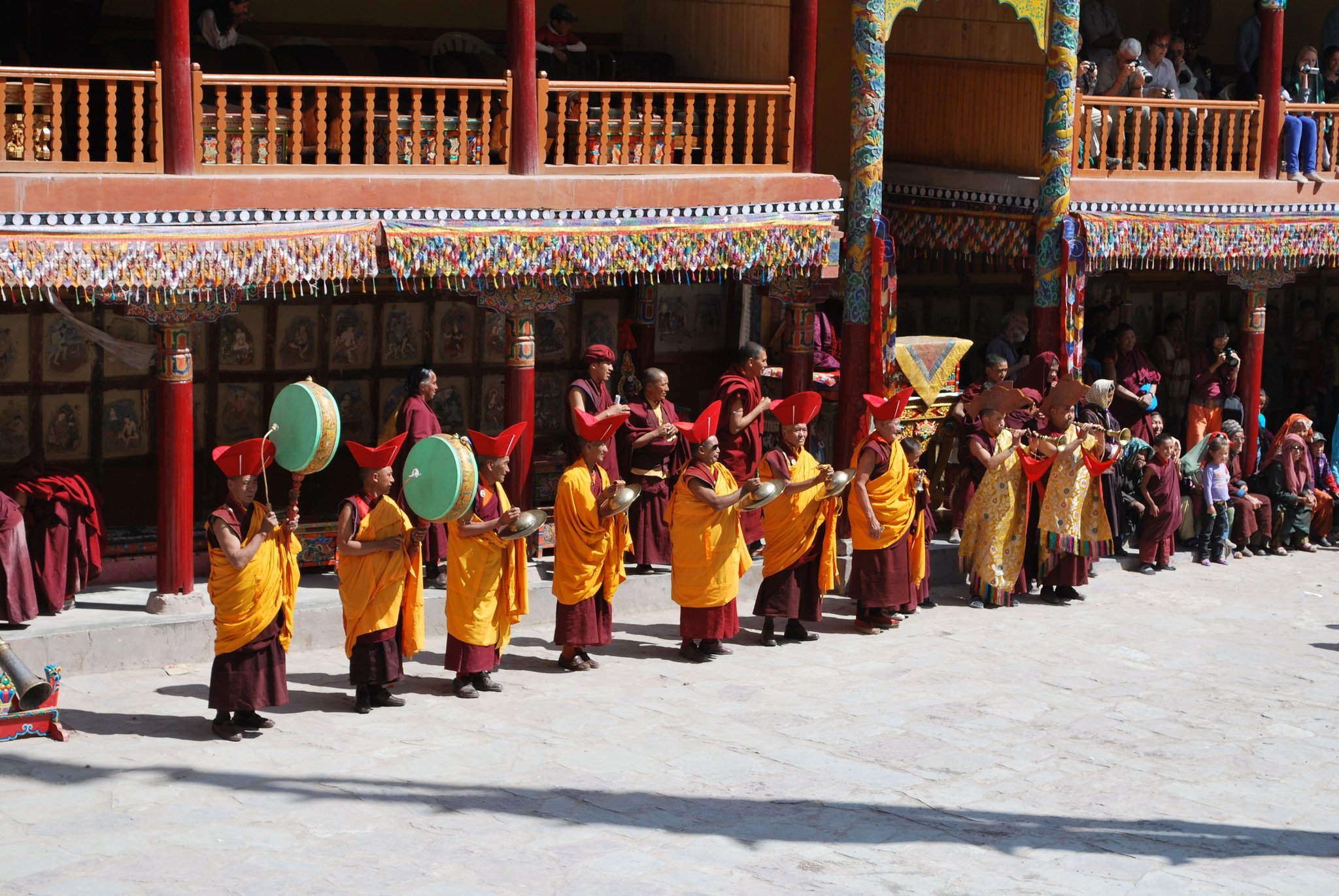