Iranian lovers and honeymooners are renowned for heading to Kish, the tiny sandy island just off the coast of Iran. Whilst I did not have a lover to hand, I wondered if on my brief trip to Kish that it might seduce me with the famed Iranian hospitality and culture. 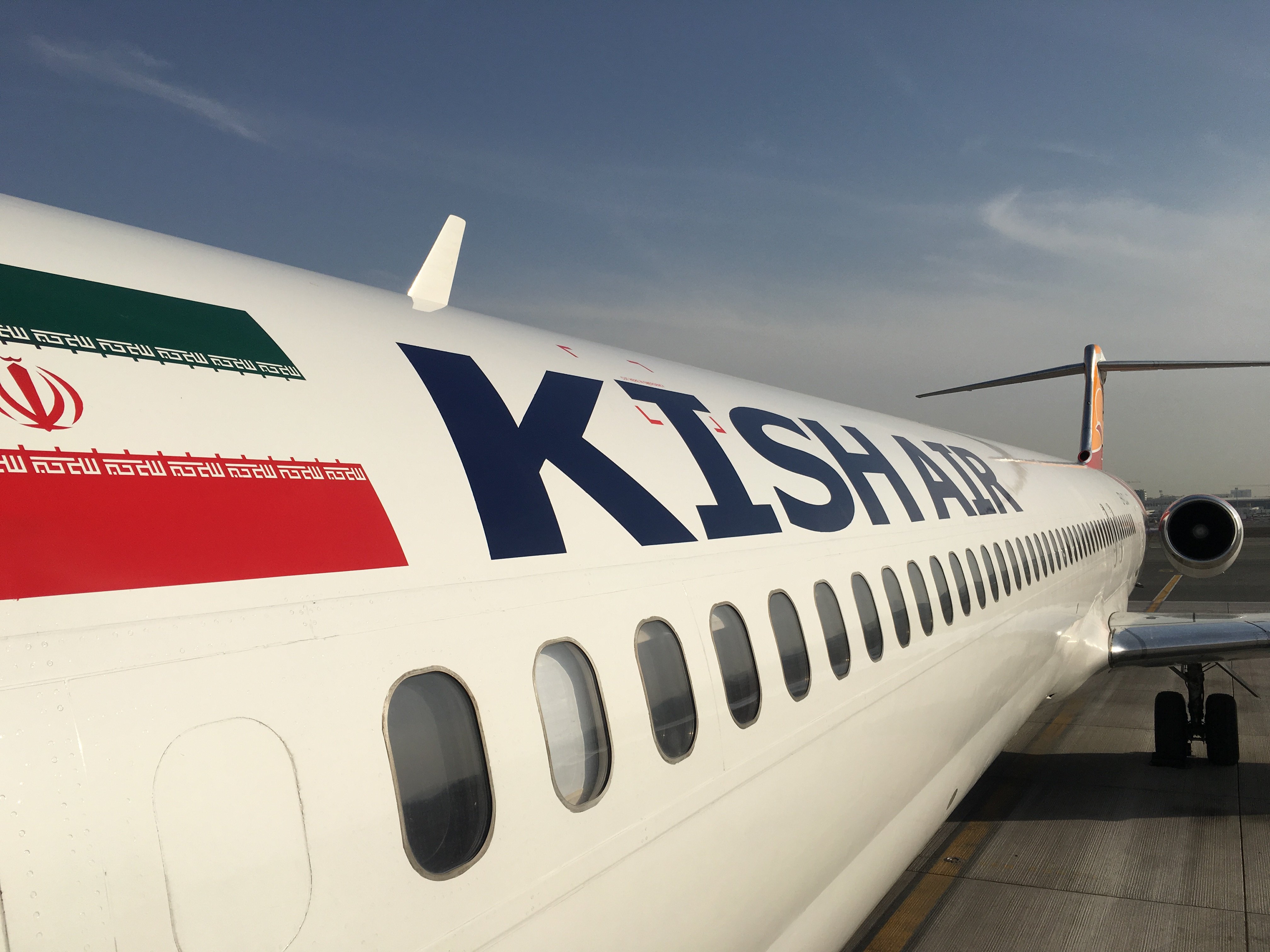 The self-proclaimed ‘Beautiful Island of Kish’ lies less than 45 minutes flight from Dubai on the island’s eponymous airline, Kish Air. Offering a visa on arrival for Western tourists, it is hardly an encumbrance to get there.

It was once going to be the ‘party island’ of Iran; the Las Vegas of the Persian Gulf. That was until the Shah was toppled in 1979. Since then the casino has been left to decay and the Islamic Republic of Iran’s more conservative version of a fun-in-the-sun holiday has been enforced.

Kish is said to be more relaxed than the mainland, though I came unstuck on my first morning. Entering breakfast at my hotel in knee length shorts and a polo shirt, the young lady welcoming guests took one look at me and shook her head. She had no English, which is very common on the island, and I have no Farsi, but the message was clear. I trooped back to my room like a naughty school boy to put long trousers on.

Despite the wonderfully warm and humid air, I kept the trousers on to cycle around the island. A cycle track helpfully circumnavigates the small island, with bike hire shops aplenty in the more populous eastern end of the island.

Not that I had many pre-conceptions about Kish, but I was immediately struck by the astonishingly turquoise waters. The soon uninhabited coastline interchanged between a cliff of a metre or so high dropping to the tempting sea below and narrow stretches of white sandy beach.

The first stop on my ride were the ruins at the rather optimistically named Harireh Ancient City. Once a thriving port conurbation around the 8th century, with artefacts found as far back as the first century, little more than one house remains, with some unexplained reconstructed walls by the shore.

Slightly baffled by the ruins but thankful for the rest stop, I did learn there of the Iranian love of barbequing. Beneath the shade of nearby trees, local boys on an organised trip were huddled round half a dozen substantial concrete barbeques, slowly cooking homemade and very tempting chunky meat skewers over hot coals. 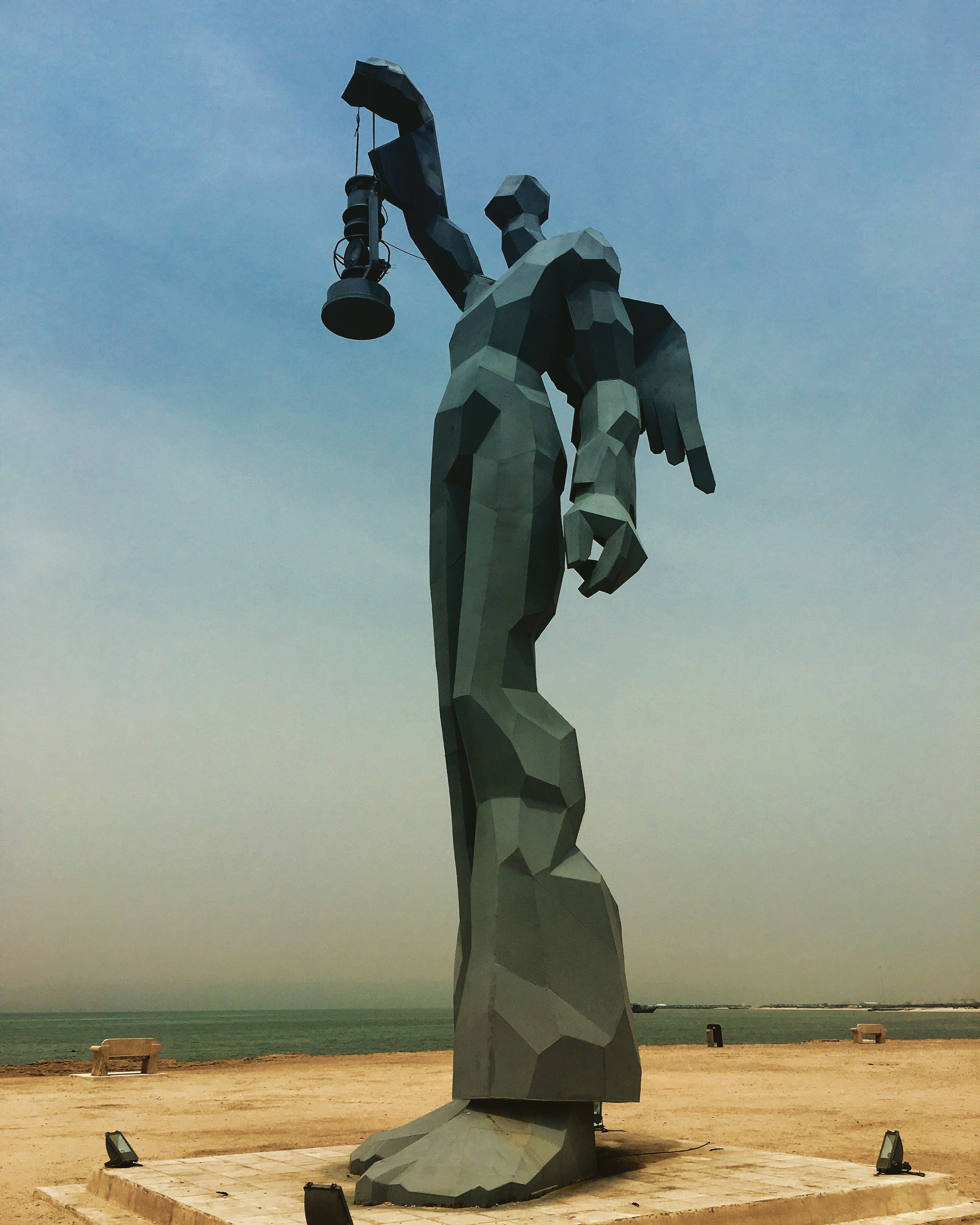 As I cycled on, I barely spotted a soul. Reaching the far West corner of the island was marked by an enormous flag pole proudly flying the Iranian flag and Kolbeh Hoor, a very large, daunting, metallic angel shining a (working) lamp out to sea.

A little further on was one of the proudest and oddest sights on the island: a rusting Greek cargo ship. Accidently run aground in the 1960’s, the eerie ferrous carcass is of no discernible historical significance. Yet, visitors to Kish flock to take a selfie in front of it. Official signs suggest returning at sunset for a romantic view. I was less convinced and pedalled on.

I continued my circumnavigation along the southern shore, with still rarely a soul enjoying the numerous beautiful small beaches and the helpfully installed barbecues at most of them. By the time I reached the more populous eastern end, the odd gaggle of guys could be spotted on the beaches. The pick of the whole island is tucked behind the Dolphin Park and had but four guys there.

It was usually guys on the beach and in the sea, dressed in just shorts. The ladies seemed less inclined to take to the water, perhaps because they were required to remain conservatively dressed, with a headscarf tightly or loosely in place. There is a heavily secluded Ladies Beach however, where presumably ladies can wear whatever they like. 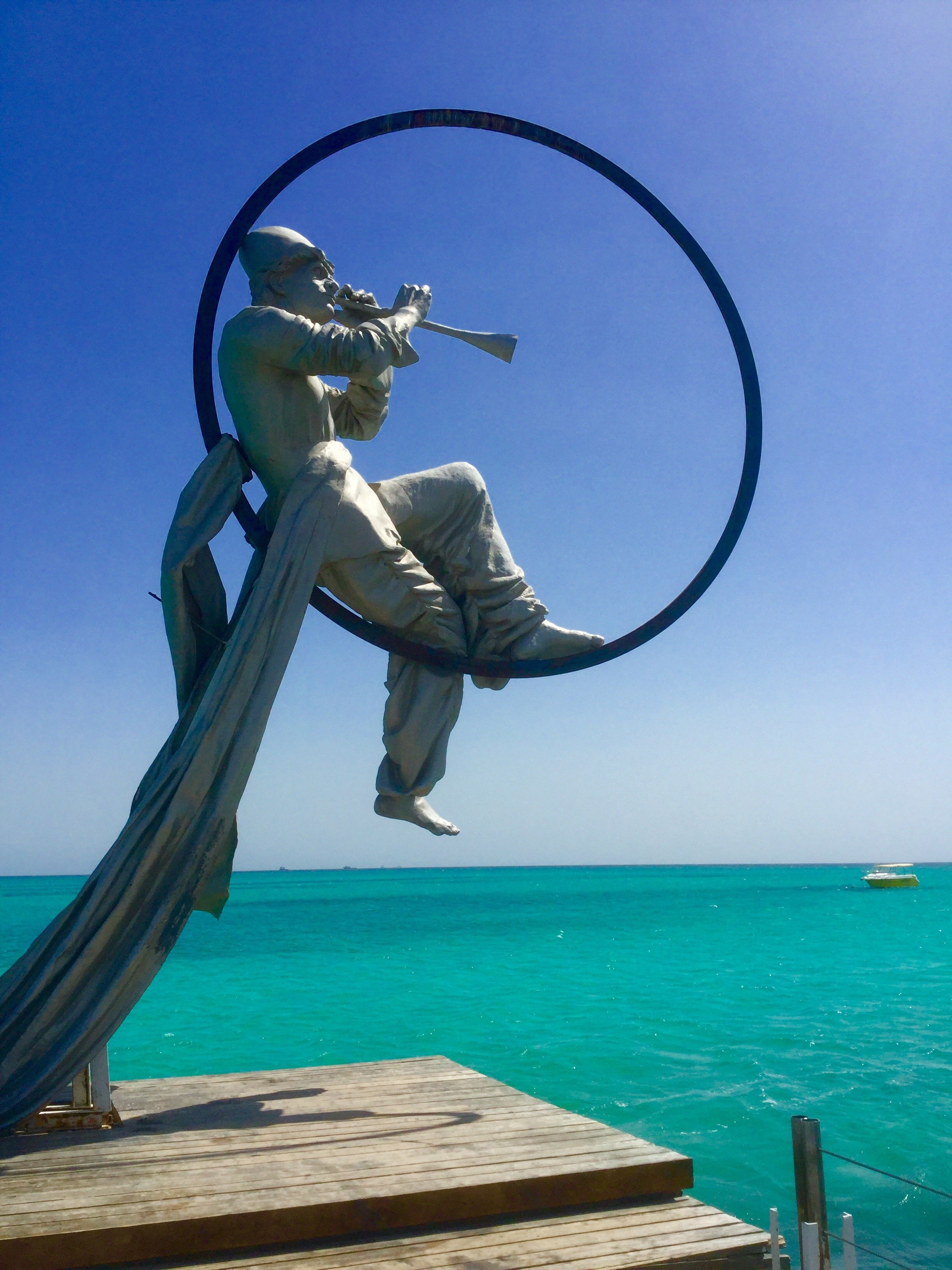 Cycling the final stretch back to my hotel, the Grand Hotel Dariush, I was struck by the number of huge pieces of sculpture perched at the end of short piers or on the beach. Curious and fun, no explanation was given as to by whom they were made or what they might represent.

The investment in the installation art did not extend to all the sea front real estate. Whilst inland there were many cranes and much construction work underway, there had noticeably been buildings on the coast that had been abandoned for decades, forgotten and crumbling dangerously.

Dinner in Kish is a late family affair, at around 10pm. My Western hunger, after a five hour cycling odyssey, required sating by 8pm and I therefore dined in a completely empty restaurant, one of very few even open at that hour. Grilled fish, much rice and the odd vegetable, washed down with a couple of mint and lemon juices hit the spot. Alcohol is, of course, banned on the island. 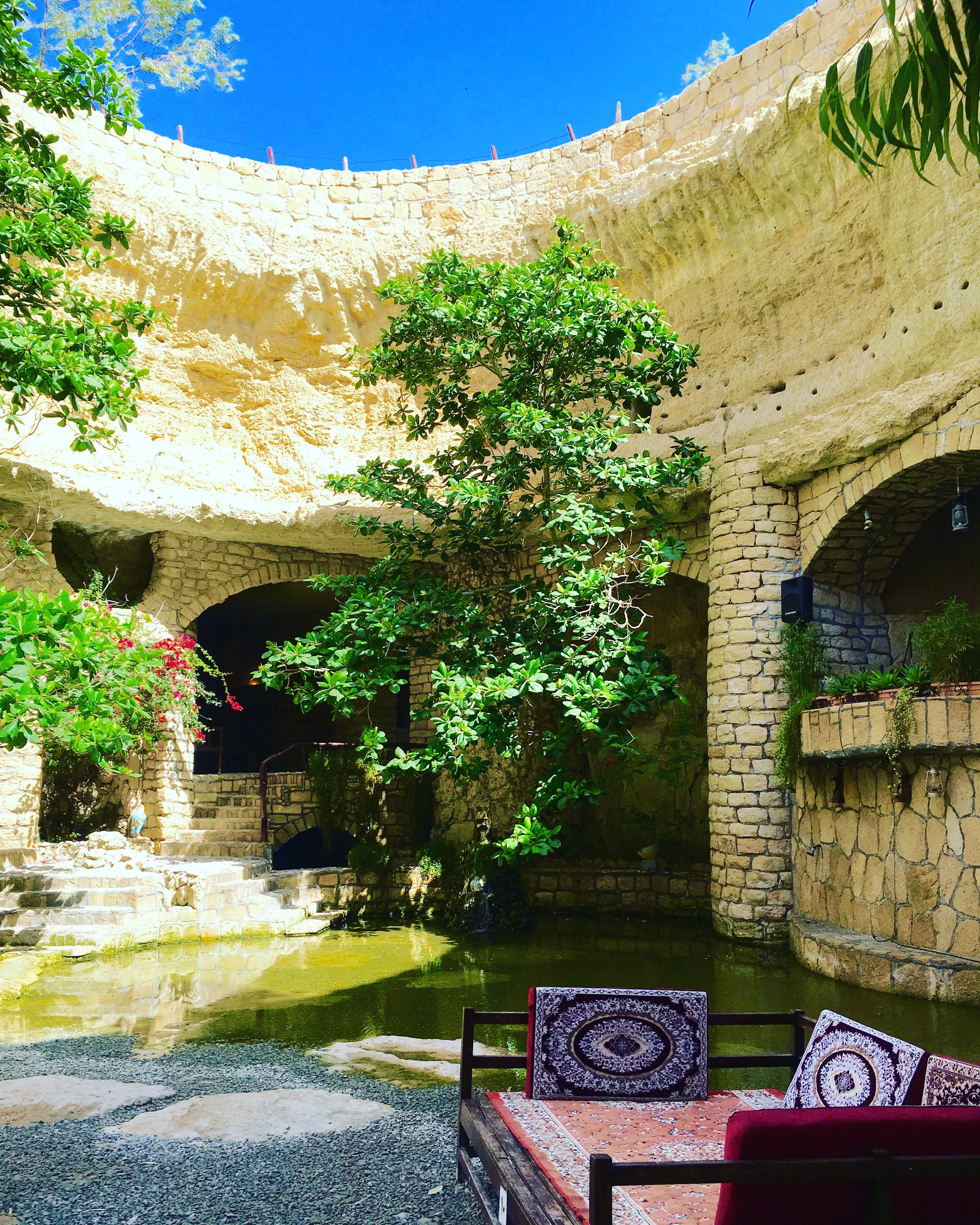 The morning of my second and final day was spent exploring the much vaunted Kariz-e-Kish. A network of natural underground aqueducts, Kariz-e-Kish provided fresh water to island’s inhabitants for thousands of years. It is reported that ships would dock at the island only to take on fresh water for their onward journeys.

Now largely empty, with miles of the system cordoned off, the tunnels have been re-clad and are easy to walk through. Despite the odd water feature with coloured lights, the distinct lack of anything to read, see or do down there does rather beg the question, why bother, I am afraid. The coffee shop just before the exit is pretty, shaded and just about the highlight.

An afternoon meander inland proved that even Kish, when a block or two away from the shore, is a pretty normal, functional town of concrete construction. The proliferation of malls and supermarkets is due to Kish being a free trade zone, devoid of trade taxes. A boon for Iranian visitors, though arguably not much here for Western tastes. 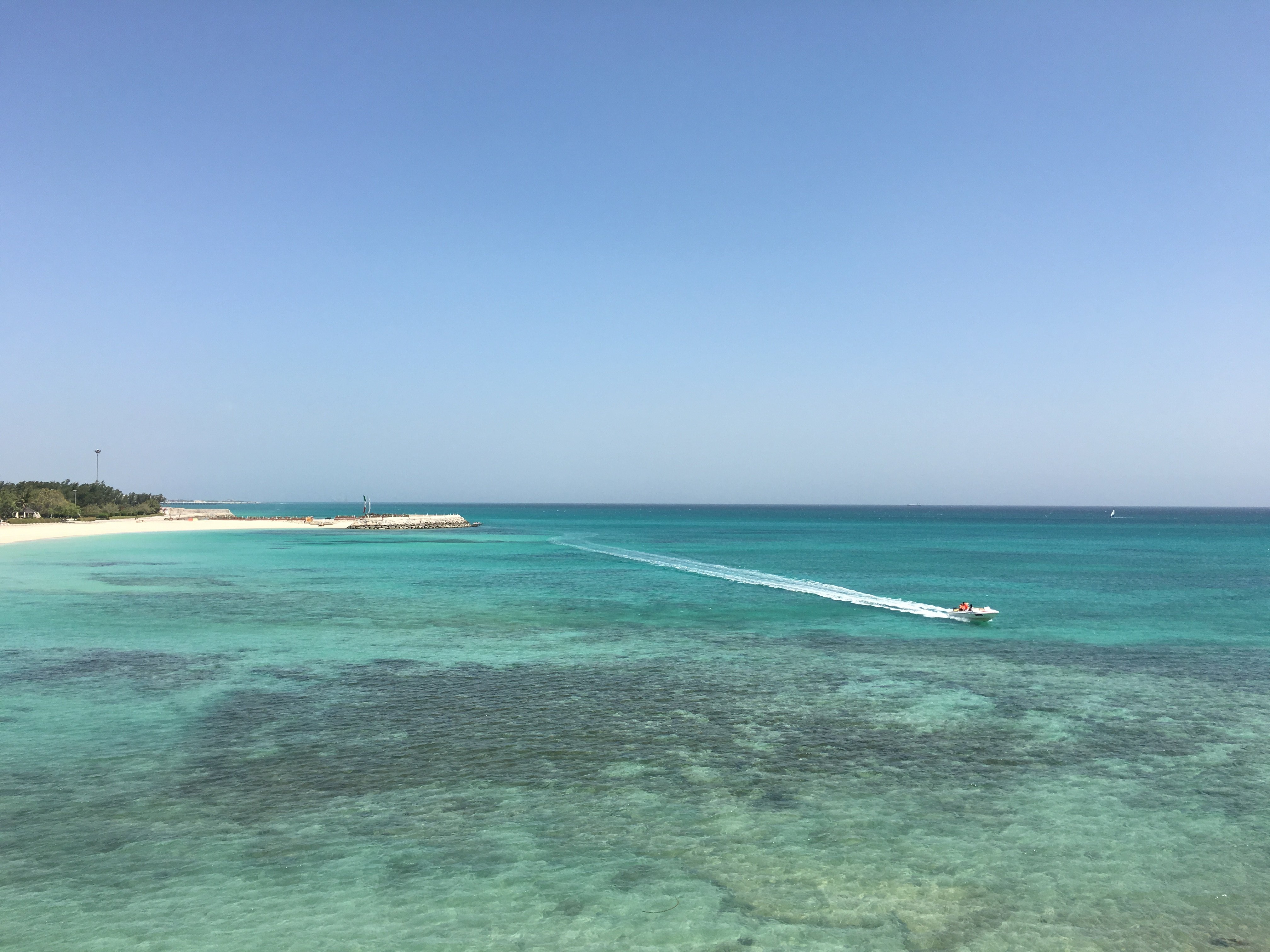 For the late afternoon, I parked myself in a cabana facing the sea. Reading a book in the warm sunshine and taking in the relaxing vista of the turquoise sea, and families milling by on foot or less surefootedly on hired bicycles, it would take a miser not to enjoy it.

As a final hurrah, I dined like a native at 10pm at the locally famous Mirmohanna restaurant. The maître d’ greeted me like an old friend, and showed me to a table as if it was my regular spot. Either to advertise or forewarn other patrons and staff, a small Union Jack flag was placed on my table. I noticed they had a collection of dozens of international flags, ready and waiting for other worldly patrons.

In prime position to enjoy the live band later on, I feasted on locally sourced “walrus steak.” I am quite sure it was not walrus but tasty and huge it was. By 11pm, families with children of all ages filled the tightly packed tables and watched, chatted and chewed as one, two or three musicians played traditional Iranian songs to a sporadically appreciative audience. I took my leave by midnight to a very warm hearted farewell from the maître d’.

As the plane departed the next morning, Kish bade me a flirtatious farewell with the true expanse of her turquoise and coral coast apparent from the air. Both I, and most of the visitors to the island, missed a trick not spending time exploring the reef and its marine life.

The seduction technique of Kish is a subtle one. It is akin to Iran flashing a bit of ankle, teasing visitors with wonderful food and hospitality, a dash of ancient history, a splash of the quirky and some stunning scenery. It comes with a warning stare though, that Iran will not succumb easily: there are rules to be followed.

Duly noted, Iran, but I am afraid I am smitten and I will be back for a second date.