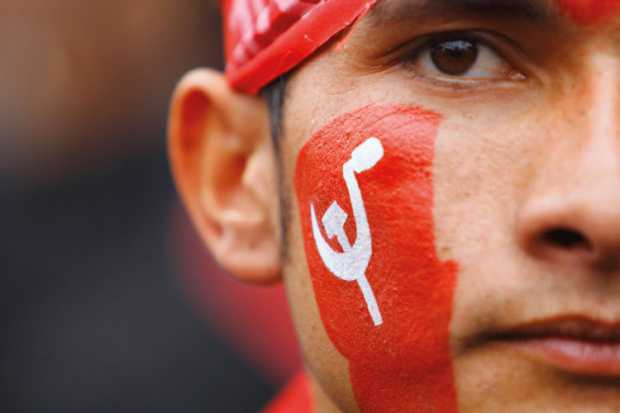 The first signs of trouble were subtle and imperceptible, to us at least. We had had three frustratingly uneventful days on a tiger and rhino spotting trip in Chitwan National Park, southern Nepal. Dawn elephant safaris through the sodden forest of Chitwan had yielded no sightings. Neither had guided walks along the banks of the Narayani river and into Chitwan’s interior. The bucolic environs had at least been a relaxing antidote to the tribulations of daily life. 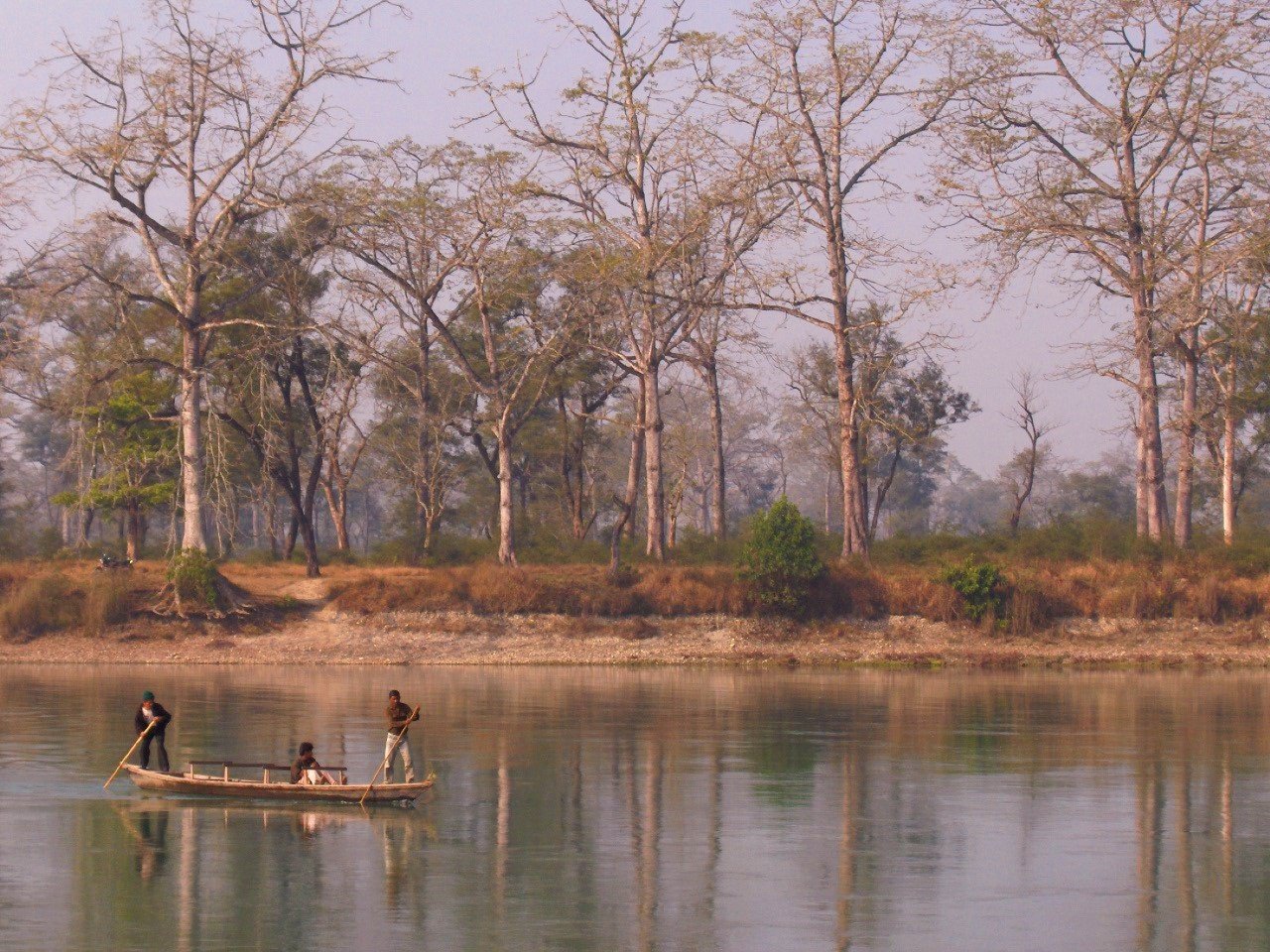 Returning to civilisation, we first boarded dug-out canoes, packed in with our rucksacks, crossing the wide, gently flowing, Narayani river. Then by car, in a couple of old 4x4s, we weaved through the grasslands of the local farmers’ fields and into the local town for our long rides back to Kathmandu.

Watching the road outside a local tourist hotel, the rendezvous point with our driver back to Kathmandu, I was struck by something: no cars. The road was quietly busy with bicycles and pedalled rickshaws, but no buses, lorries or cars. I wandered back into reception in the hotel, where there was a palpable atmosphere. Concerned mutterings in hushed tones. Staff watched the news on television intently. Another was scouring the local newspaper. 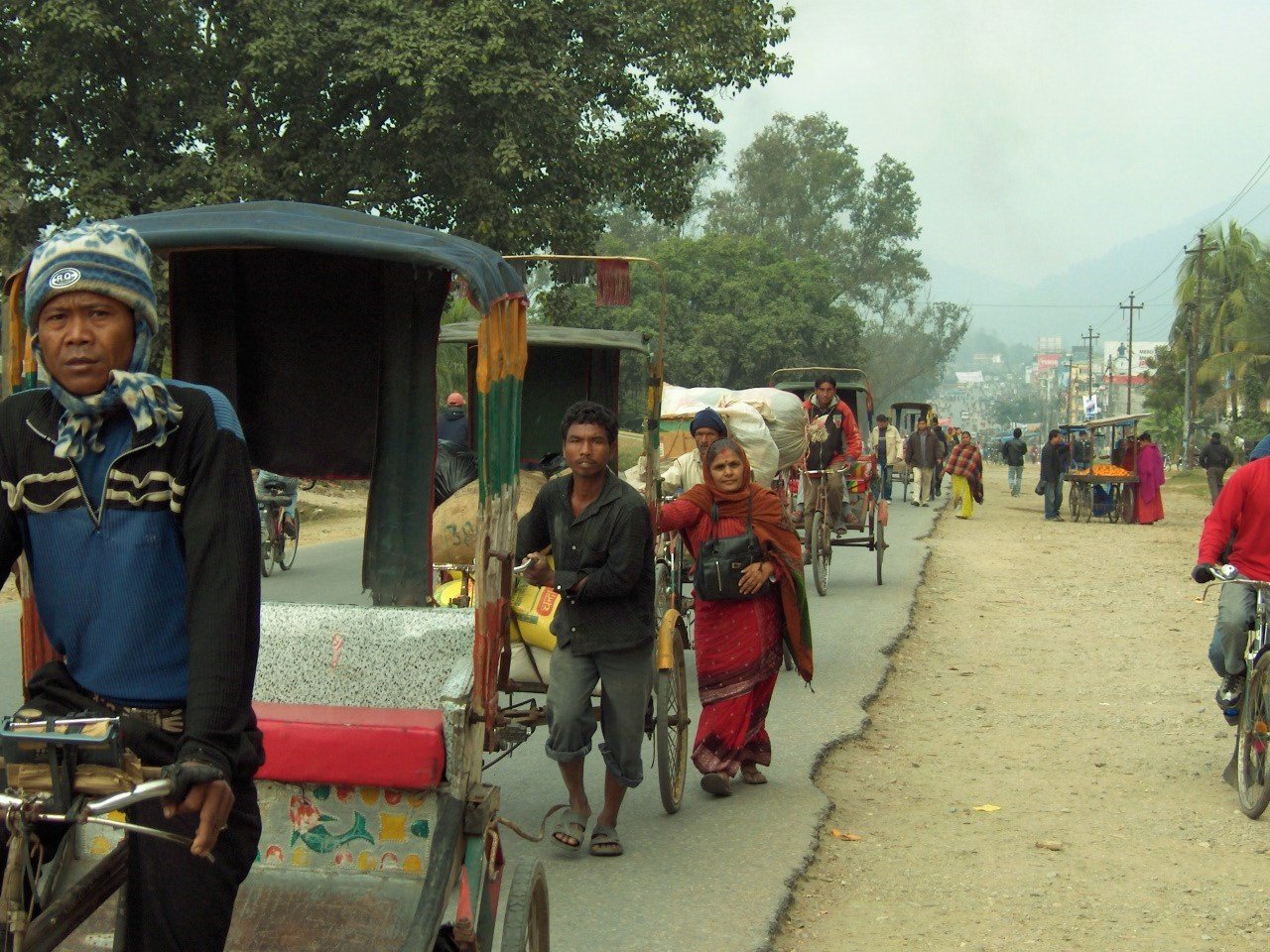 For a decade, Maoists had been fighting a bloody ‘People’s War’ with the Nepalese government through armed conflict, kidnap and blockades paralysing the country. Thousands had been killed, with many still simply missing. Foreign tourists were not targets per se, but had a ransom value, if necessary. Though the ‘Comprehensive Peace Accord’ was signed in November 2006, at the time of my visit in January 2007, fierce demonstrations and Maoist blockades of roads for days, even weeks, still occurred.

Elsewhere in the country, the town of Pokhara in central Nepal had been blockaded for over a week. Not one vehicle was able to enter or exit. A tourist and commercial hub, it was causing increasing difficulties for locals and tourists alike, with basics like food and fuel starting to run out. Tensions were high there and one never knew where it might spread next.

That is when I heard the sombre news. A young local girl in the town we were in had been killed in a hit and run accident with an inter-city bus. The understandable anger was being whipped up, we were told, by the Maoist rebels. The town was rapidly being encircled with a blockade: nothing would move in or out. 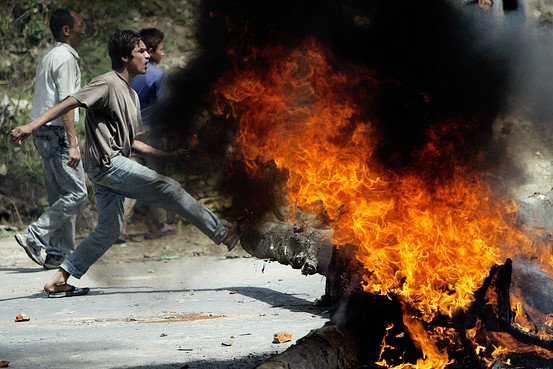 Tension befell our group and our local tour helpers. Not least did we all have flights to catch in the coming days but we also had a certain value for the Maoists, which none of us wished to see cashed in. Time suddenly became of the essence. Five of us Brits were bundled into a small soft top jeep and were driven with determined speed along back country tracks, through the woods.

Emerging onto a more substantial tarmac road, still in a dense wood and dark because of it, traffic was heading in one direction at least. Out of town, we were told. Our driver swung into a long layby, opposite a small military style camp. The roadside checkpoint and guard post there lay empty. Whether abandoned in haste moments ago or dormant for some time, I could not tell.

Our driver asked us to stay put, nervous and aware that the rebels were heading in our direction. Despite those words, he jogged off down the road, out of sight, to collect a vehicle part for a colleague who had broken down enroute to Kathmandu, which he planned to drop off on the way.

We sat motionless, hearts beating fast, hoping to catch a glimpse of our driver returning with said spare part for which he was risking our logistical freedom. Laden trucks and over-flowing buses crawled by in puffs of acrid exhaust fumes. Their passengers stared at us incredulously: this was not a place to stop, even momentarily.

The whine of massed motorbikes grew louder and was a sound we did not want to hear. When they arrived, their riders wore bandanas to obscure their faces. The thud of the rocks they hurled at the front windscreens of the slow moving trucks, was followed immediately by the sound of shattering glass and the shuddering of lorries coming to a halt.

The Maoists were incensed, shouting and pointing at the truck drivers. They lined up rocks, oil drums, tree branches, whatever they could find, across the road a twenty metres or so behind us. Their point was clear: this is the line that you will not cross. The lorries with shattered windscreens were not able to go anywhere, let alone breech the blockade.

When all you can see of a person’s face is but their eyes, those eyes take on a piercing intensity. One rebel came up the road to see inside our jeep, standing a few metres away. He eyeballed us, pointed something at us. It was not a gun; maybe a knife or machete. He shouted fiercely, exuding his propensity for violence: “Get lost! Get lost, now!” was my interpretation.

We looked for the keys of the car. Had they been there, we would have fired up the jeep and been gone. Instead, we sat in anxious silence, prisoners until our driver returned. After an eternity, some ten excruciating minutes, he did so, carrying a lumpy metallic spare part. Under a barrage of shouts from the dozen or so rebels wandering their blockade, maintaining fear and disorder, he clambered in, looking chastened.

He hit the accelerator and we lurched away, leaving the chaos behind us. Once out of sight around a sweeping bend, a small petrol station appeared. No more than 400 metres from the rebels, to our astonishment we pulled in. Our driver started the antiquated petrol pump and slowly filled up the tank to muttered incredulity from we passengers. I sat, heart in mouth, expecting to see the rebel motorbikes fly passed us any second to set up another road block.

The clunk of the petrol pump’s automatic shut-off to denote a full tank could be heard, followed by the driver tapping the pump nozzle to extract every last drop. A signal that we were finally on our way.

The road to Kathmandu was eerily empty. The majority of the sporadic ramshackle homes on the road side flew red flags to demonstrate their affiliation, truthful or otherwise, to the rebels. Seldom, a truck passed us in the opposite direction and they too had red rags flying from window mirrors, presumably to ensure safer passage. I had not noticed this on the journey out and sensed an element of political expediency in flying the red flags. 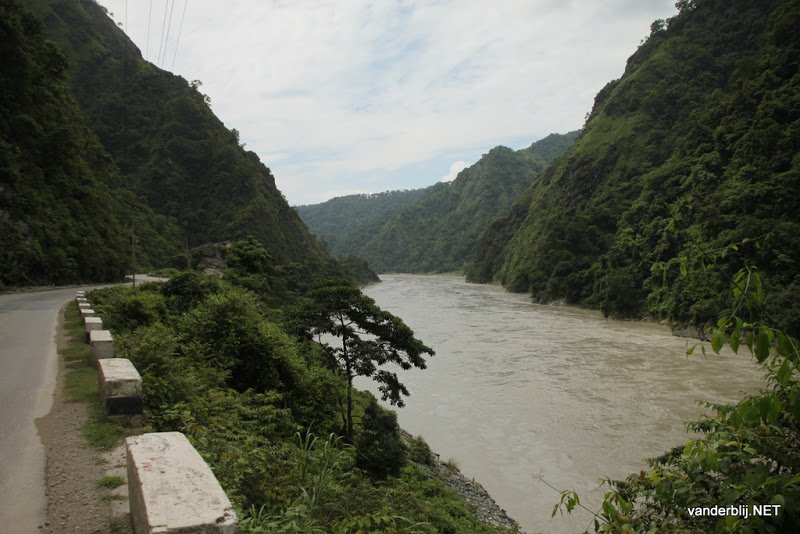 After a few hours we stopped by an identical jeep to ours, parked slightly off the road, by the picturesque Trisuli river. It was a brief exchange of the spare part in the middle of nowhere and I did feel for the other driver stuck there as chaos bubbled around him, and as we carried on.

The journey to Kathmandu took over five hours, with breath held and fingers crossed for the duration. As we spilled out of the cramped jeep at our hostel, it was not long before we all had a celebratory cold beer in hand. Had we been in physical danger? Maybe, maybe not. Had we known that at the time? Certainly not. It was the first time I had seen unadulterated rage in someone’s eyes. The rage and ferocity to effect radical political change at all costs; a rage directed, in part, at us foreigners.

Travel allows the witnessing of the spectacular, the unfamiliar and the memorable. It reframes our view of life from that day forth, providing fresh perspectives. That perspective might one day come from unwanted and uncomfortable quarters but no less an important fresh perspective it still is.