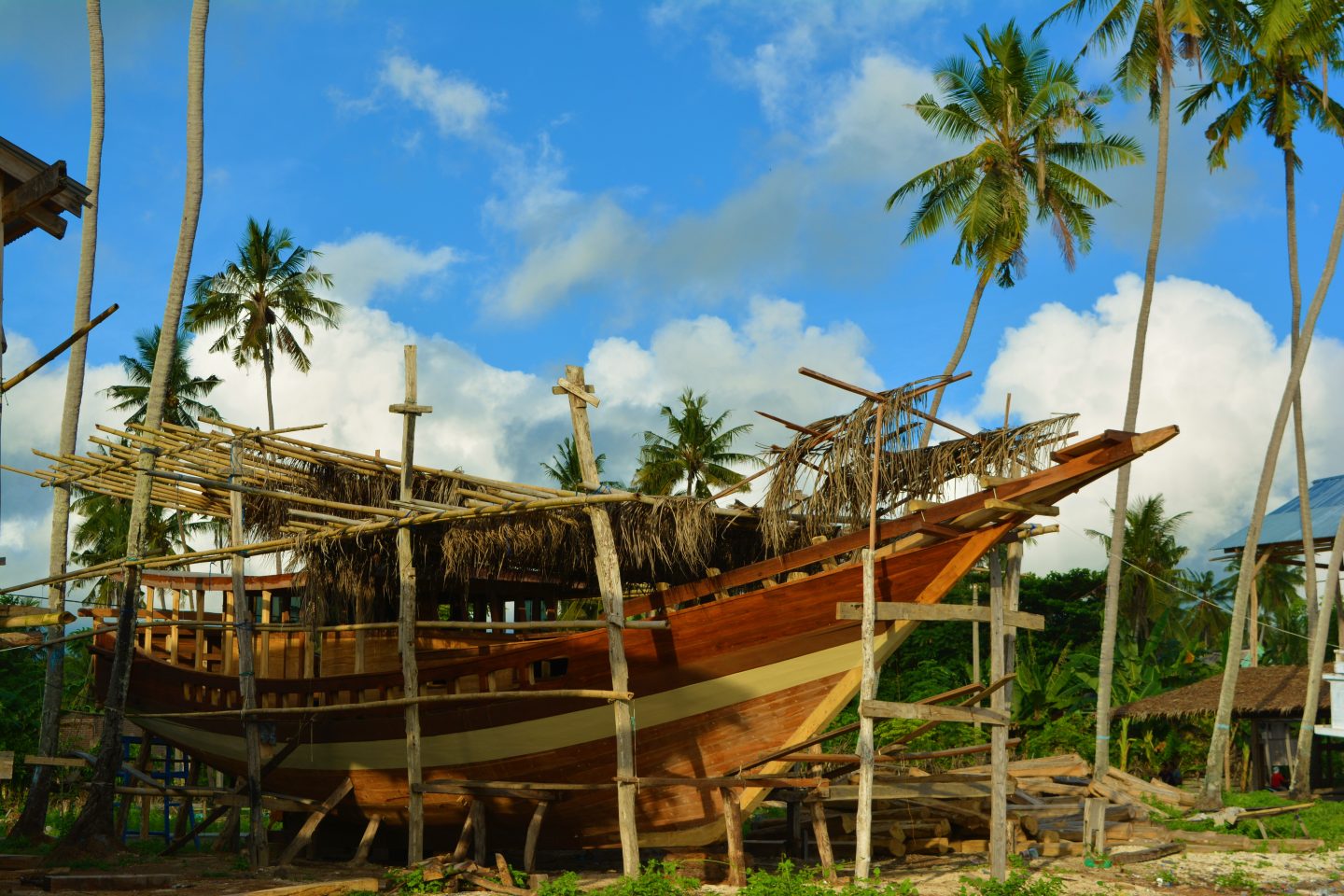 The lineage of Bugis shipbuilders is as long as it is famed. As far back as the 14th century, the inhabitants of southern Sulawesi, the Bugis people, were revered as sailors and boat builders, as well as pirates and even slave traders. Today, they continue to build their beautiful indigenous pinisi (or phinsi) boats by hand, on the beach, with no blue prints or plans.

Four hours south-east of the capital, Makassar, along a slow single lane tarmac road, lies the sleepy Bulukumba regency. Here, the Konjo, a sub-set of the Bugis, live along the coastline, swathed in palm trees and gently buffeted by a humid sea air. Regarded as the foremost boat builders of the wider Bugis group, the Konjo have filled Bulukumba’s long sandy beaches cheek-by-jowl with bustling boat construction.

We wandered between the tall boats in varying stages of construction, hopping between piles of local ironwood and teak used to build the boats. A gaggle of small children watched their elders at work and took much humour from whatever we foreign faces said or did.

Metres from the lapping sea, the palm shaded vessels typically reach 15 to 35 metres in length and can achieve some 350 tons in size. The recent addition of modern chainsaws has sped up the wood cutting process. Otherwise it remains a laborious and skillful process, undertaken completely by hand, based on the look and feel of each piece of wood. Barely a single metal nail or bolt enters the boat; almost entirely natural products are used to fasten and seal a pinisi.

The knowledge required to build such a boat is passed down, unhurried and in osmotic fashion, through generations. Larger pinisi can, unsurprisingly, take over a year to complete.

The beauty of the pinisi boats is not only their aesthetic charm, a cross between the hull of an Arabian dhow and the rigging of a schooner but their minimal draft below the water line. Hence, their ability to safely navigate the shallow coastal waters of Indonesia’s expansive archipelago whilst laden with cargos of timber and spices.

Today, the pinisi are as likely to be built for fellow Indonesian merchants as they are for international clients, desiring luxurious live-aboard dive boats to tour Indonesia’s resplendent islands and coral reefs.

Finding it easier to walk along the turquoise sea’s edge, admiring the innumerable boats under construction, an orchestra of Bugis workmen played a symphony of hammering and of sawing, punctuated with shouts between colleagues, before their instruments struck up once more.

The soporific beat belies the industry with which the men work. When finally constructed, the ceremony and process to launch the vessel unto her maiden voyage awaits the highest of tides and the largest number of hands to propel the vessel into the sea.

The proud product of centuries of Bugis history, the finished pinisi sets sail to make her own.

The author travelled at his own cost, on a trip arranged by www.megapermai.com, whom he is happy to recommend.