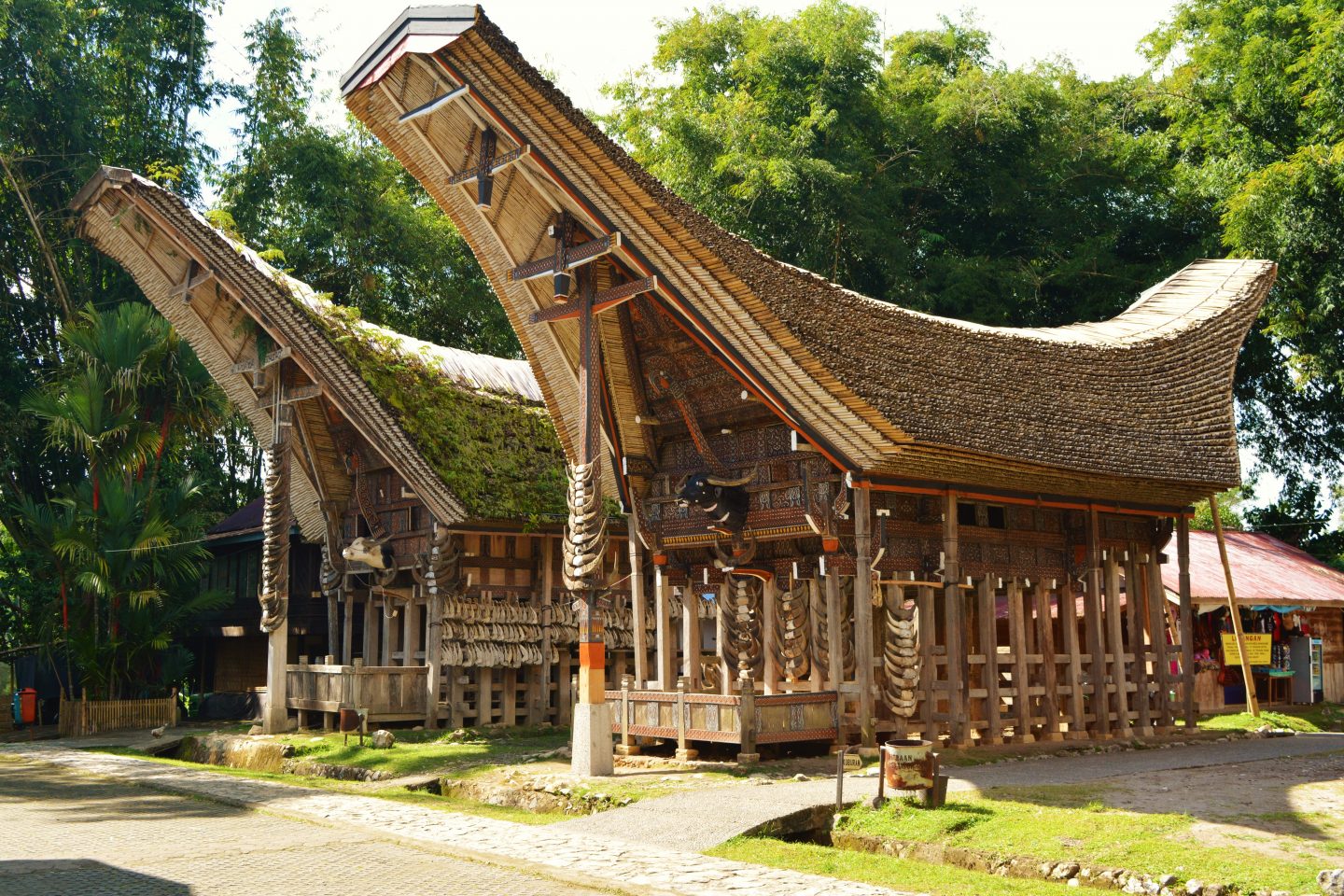 We arrived into the regional capital, Rantepao, after night fall but even in the rainy evening gloom, peering out through the car’s steamed up windows, it was clear that we had entered a region that was holding onto some very special traditions. High in the fertile mountainous interior of Sulawesi, we had entered Tana Toraja, Land of the Torajans, famous for its architecture and, unnervingly, its veneration of the dead. 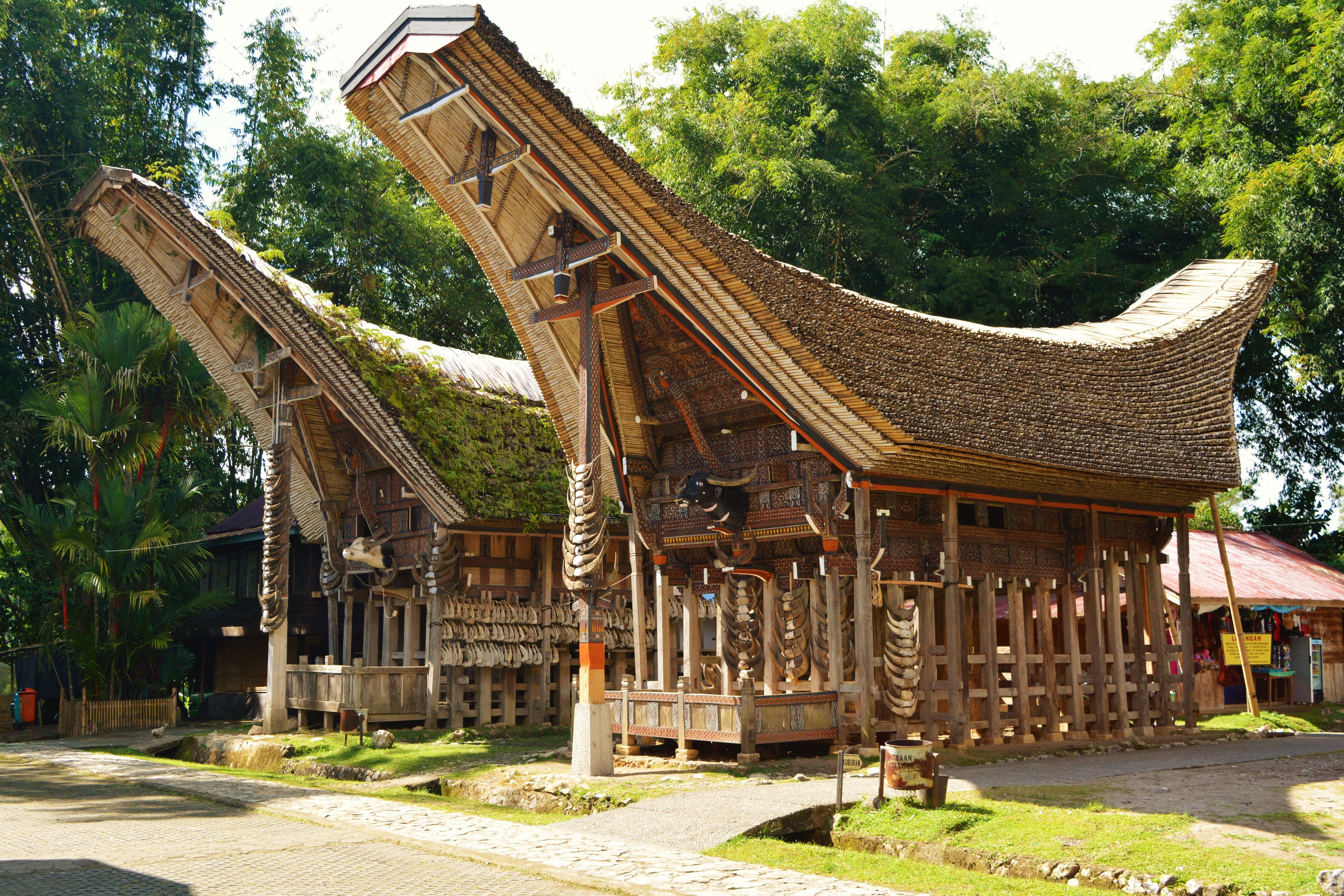 The striking Tongkonan, the traditional houses, pepper the countryside, and even our hotel, the architecturally impressive Toraja Misiliana. Ornately carved and painted, the winged eaves of the Tongkonan are akin to a boat’s raised bow and stern. Sitting on stilts, it is said that this is exactly as their forbears lived when arriving onto the island for the first time: living in the very same boats in which they had sailed to the island. Inside are a couple of large rooms, which alternate between being bedroom, living room and dining room as the hour and the need dictate. 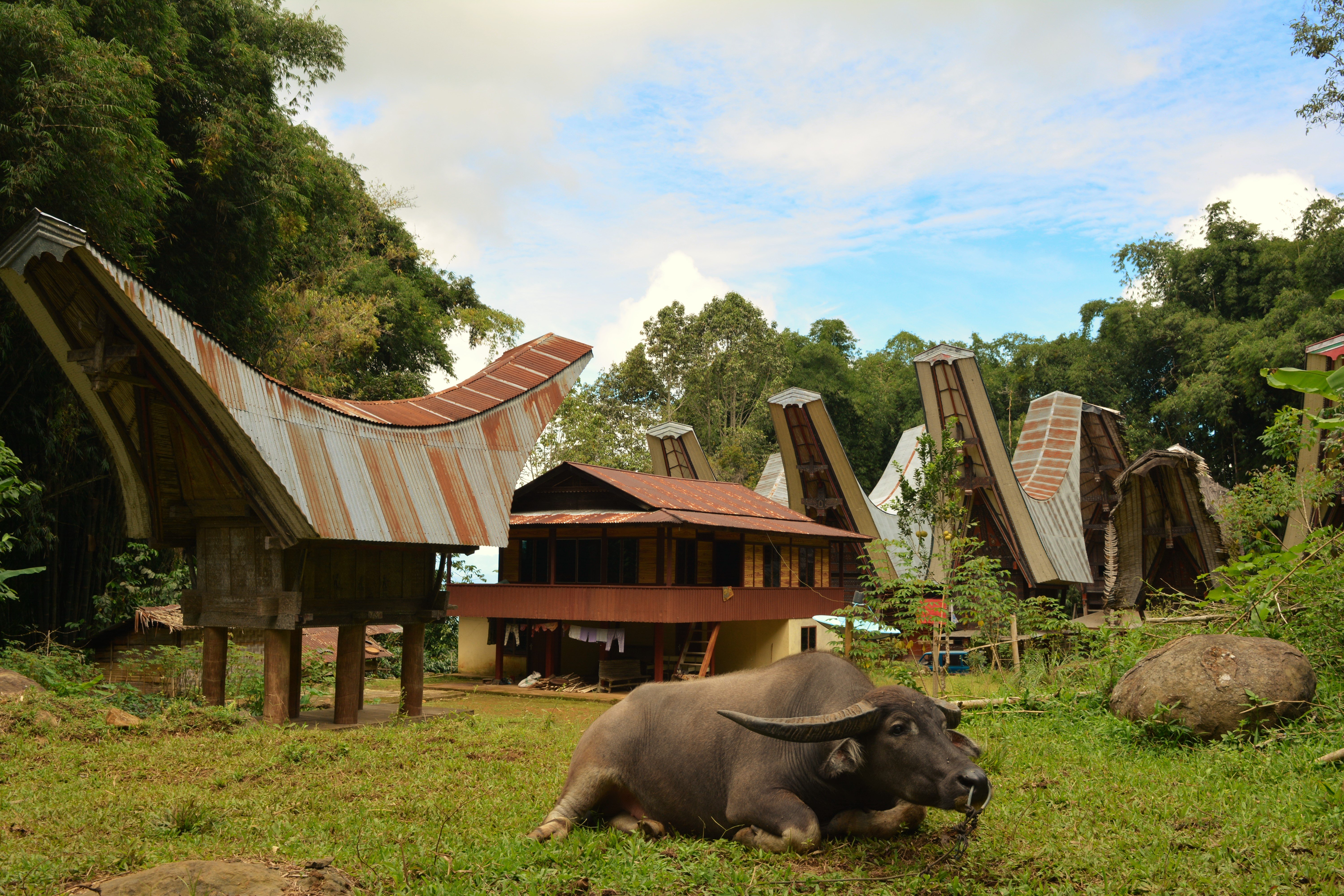 Buffalo are essential farming equipment in the regency and a sign of wealth. Buffalo effigies therefore oft adorn Tongkonan. The stacks of buffalo horns are keep-sakes from family funerals at which the more buffalo that are slaughtered, the higher the status and wealth of a family. If not a Tongkonan, for which builders are in high demand and construction can take a year, most homes will have a square rice barn of similarly enigmatic design.

This is far from the only reason anthropologists and, increasingly tourists, are fascinated by the regency. The main reason is their veneration of the dead; the view that one’s funeral and one’s grave are, and remain, the highest of priorities for the deceased’s family. 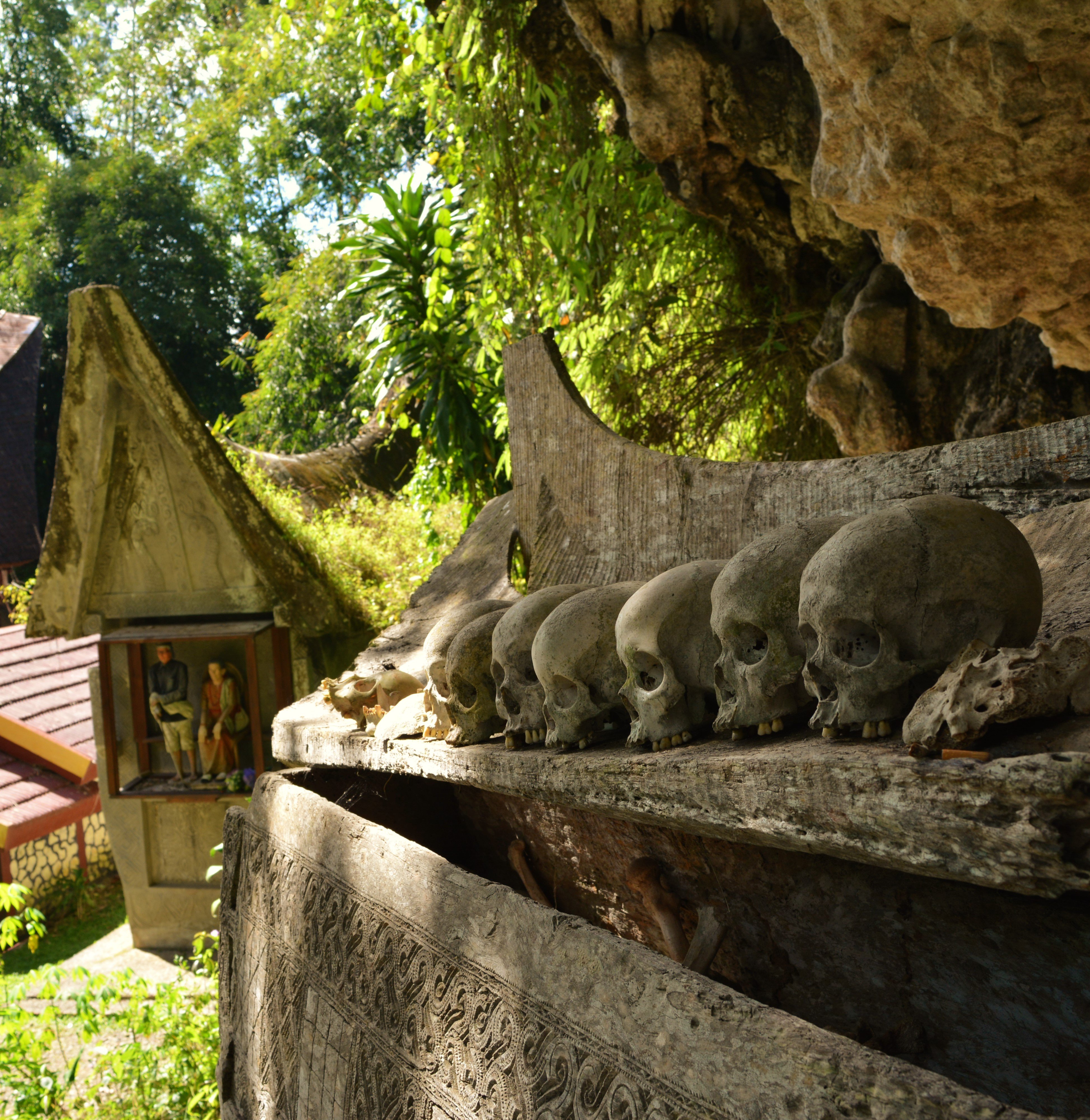 We spent a morbidly fascinating day touring the surrounding villages on foot and by car to see for ourselves the curious and eerie last resting places of the Toraja.

Rather than burying bodies in the ground, most graves are raised high up on or in sheer rock faces.  The graves at Lemo were a prime example. Mid-way up the rock face, the burial chambers were neatly carved and with a discernible door. Rather chilling small statues or tau-tau are carved from wood and, resembling the dead person buried within, stand guard in front. The clothes that the tau-tau wear are washed, pressed and replaced every so often by relatives of the deceased. 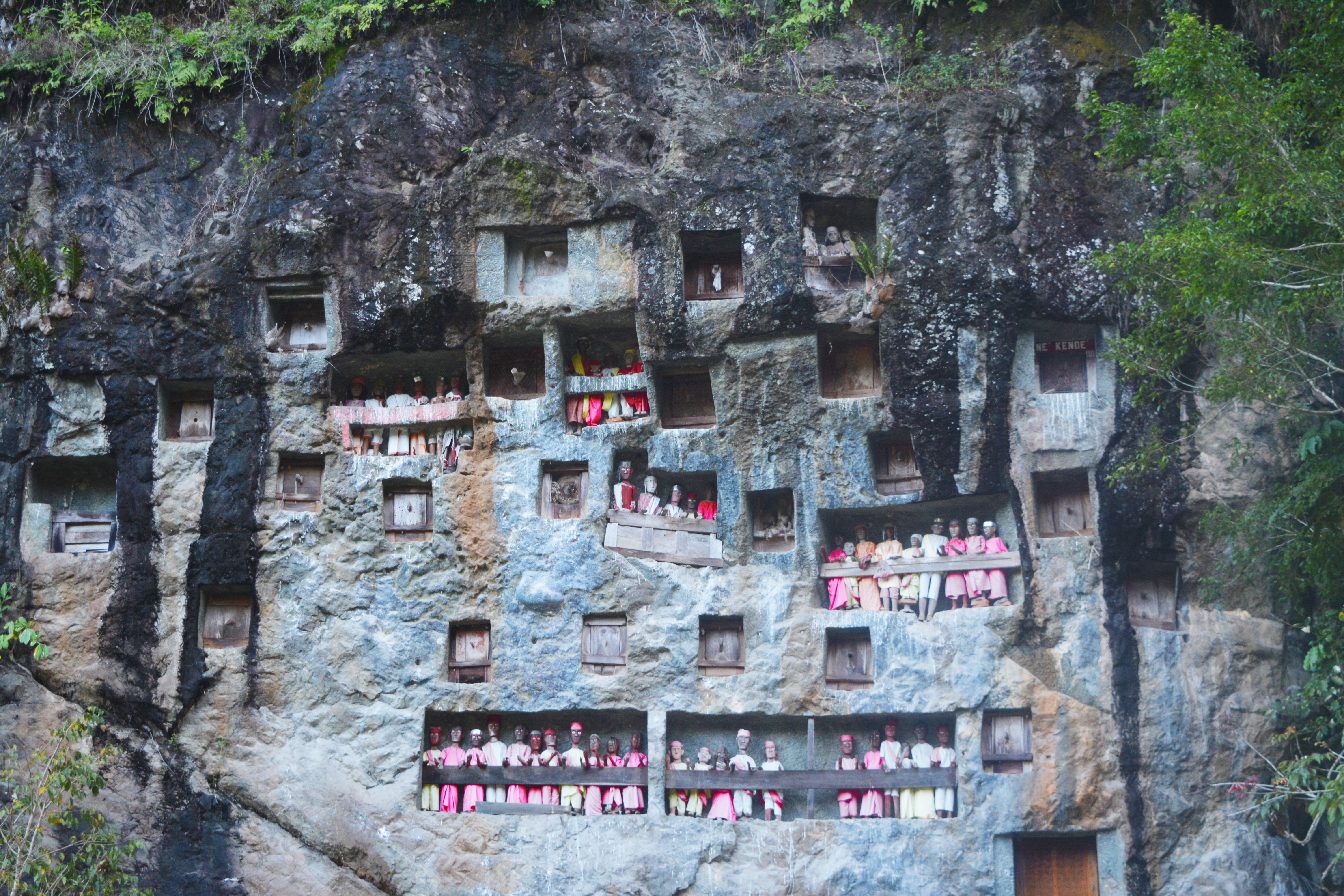 Such secure cliff face graves were not always the norm, for it takes time and expense to carve the burial chamber. 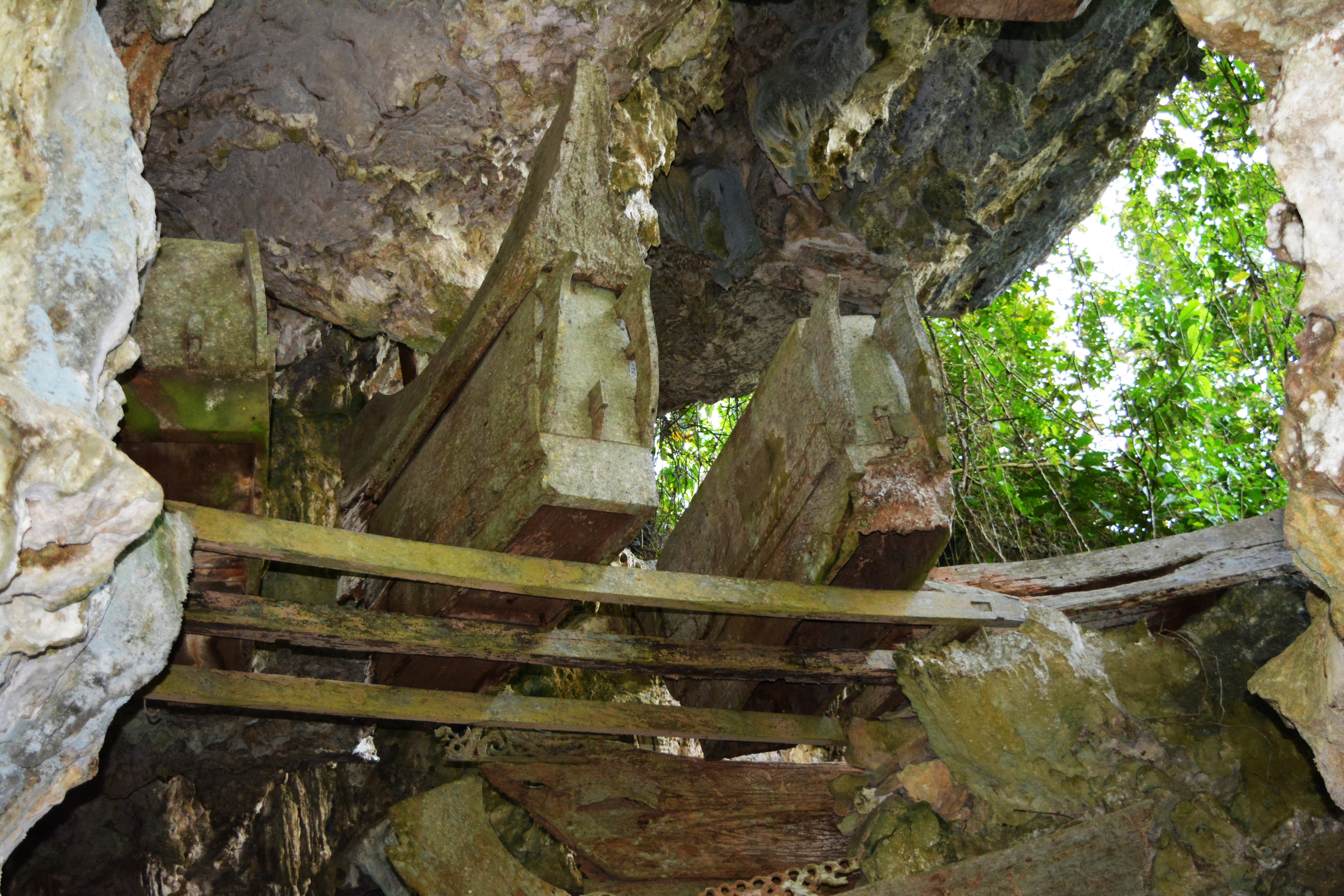 Nearby the villages of Ke’te Kesu and Sagada are the “hanging coffins.” Wooden struts had been inserted into the rock face or perched between ledges, and on which intricately carved rectangular wooden coffins sat. Not all the coffins had fared well in a region of rain, heat and humidity. Rows of skulls and bones, which had fallen from decaying coffins over the centuries and been collected up, are common place. As a gift to the dead, lit cigarettes are often put between the jaws of a skull, for the deceased to enjoy in the afterlife. 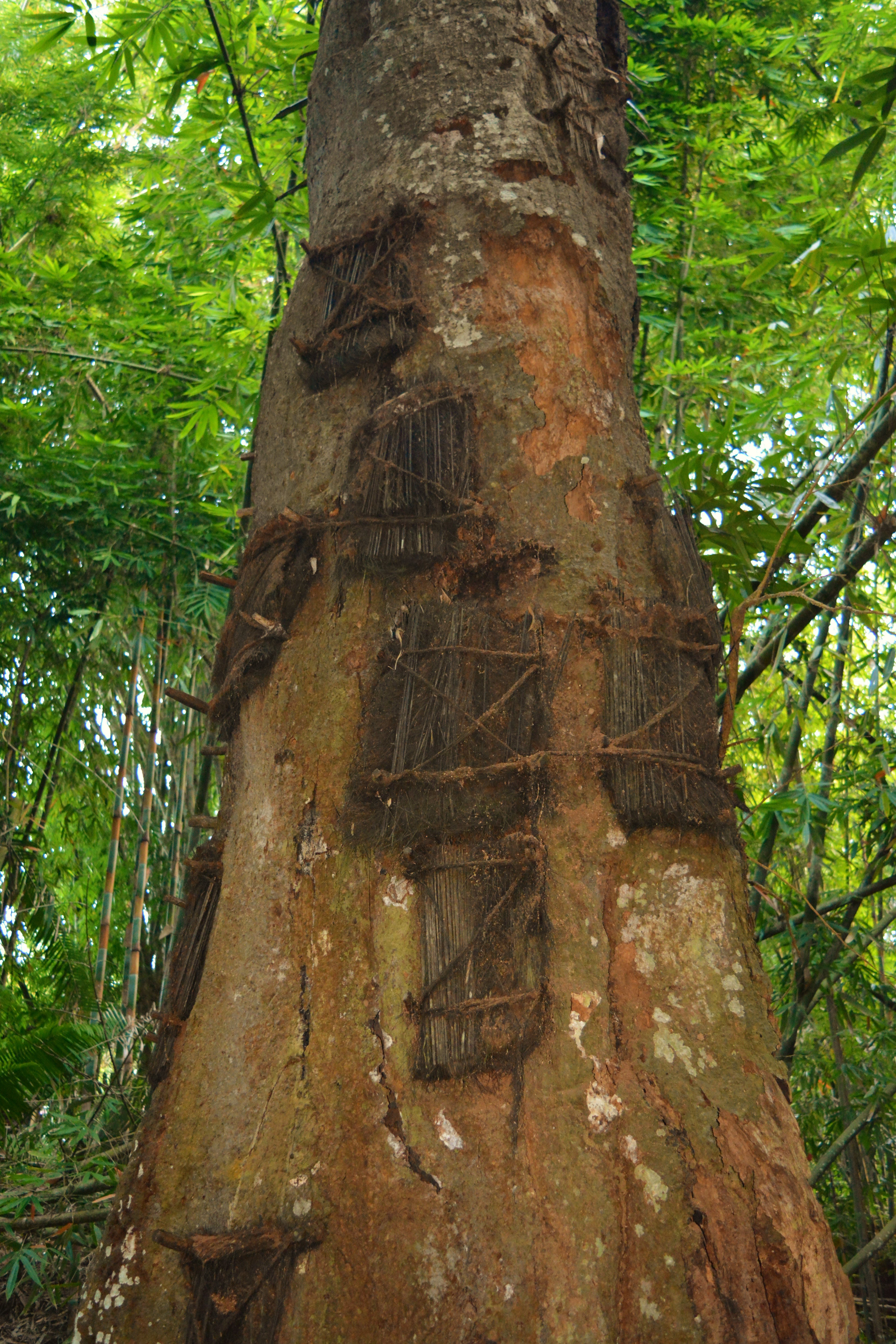 For all the sinister looking skulls, bones, coffins and wooden totems, I was moved most by the last resting place of new born babies, who had not survived. In a peaceful area of thick verdant forest, a hole is carved into one of the largest trees and into which their bodies are interred, so that they can grow with the tree for decades to come. Here, there was an air of respectful solemnity, which I had not felt elsewhere.

If visiting the burial sites is not curio enough, there is a final and compelling reason why Tana Toraja retains a place in extreme cultural immersion: funeral season.

Find out what happened when we went along to local funeral: “Funeral Season – Tana Toraja, Sulawesi.”

The author travelled at his own cost, arranging the trip in conjunction with local agents MegaPermai, whom he can happily recommend.