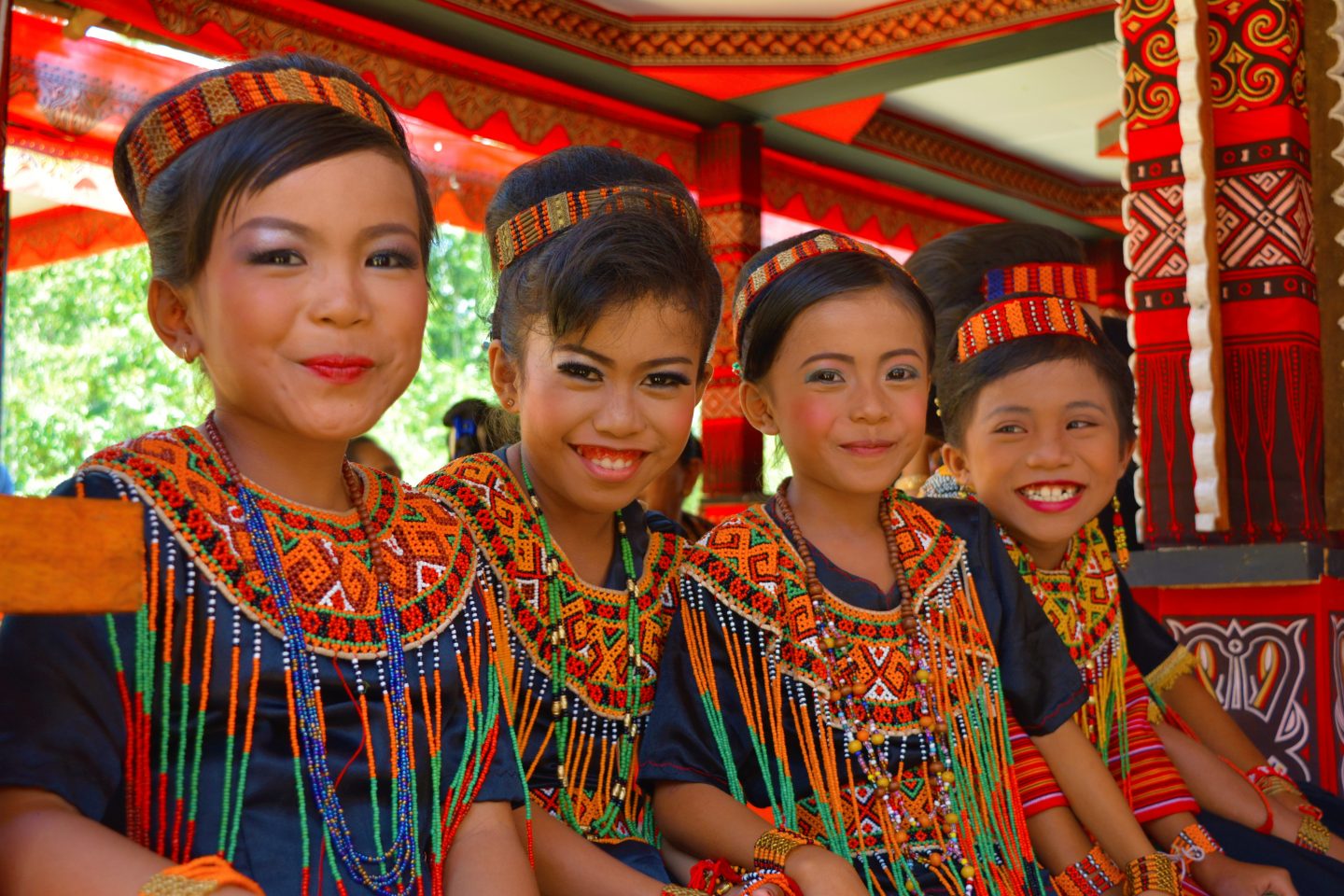 “Death is a very dull, dreary affair, and my advice to you is to have nothing whatsoever to do with it.”

So said Somerset Maugham. Fortunately the Sa’dan Toraja people of the remote mountainous Tana Toraja regency in Sulawesi, Indonesia’s fourth largest island, took no notice of him whatsoever. They firmly believe your funeral is the biggest day of your life and intend to send you on to the afterlife with nothing short of a festival.

As the dry season commences in September in Central Sulawesi, the crops are being harvested, and another season also begins: funeral season. The deceased’s body is preserved until the funeral season arrives and appropriate preparations have been made. Trucks and minibuses of black clad individuals making their way on mass through the narrow village roads are the tell-tale sign that funeral season has commenced.

Similarly dressed in dark clothes, we set out of Rantepao, the main town, with our guide Immanuel, up into the hills for the very same. The dirt track narrowed, too small for our car. As we walked the final stretch, dozens of mopeds, a preferred mode of transport here, were parked up, lining the rocky track. This was clearly a large funeral.

Taking many months of preparation, committees are established to ensure the workload is evenly delegated and no details left unattended. Months alone are required to build the temporary bamboo pavilions for guests to sit and shade themselves from the punishing sun and occasional passing showers. It struck me that this purposeful work, for months, in honour of the deceased may ease some of the pain of the death of a loved one.

We walked down a narrow path to the ceremony; each step was a step back in time to witness a mortuary ritual from a lost age. Though nominally Christian, the funeral practices of the Sa’dan Toraja would be unlikely found in the Old or New Testament.

By the entrance stood a small booth, where guests registered their offering. It is traditional to bring a pig or a buffalo to sacrifice at a funeral, with an albino buffalo costing over a billion rupees and especially prized. Trussed between two bamboo poles, half a dozen fat squealing pigs were being registered and carried on the poles over the shoulders of young men into the grounds of the ceremony.

Curiously, the sacrificial offering is not for free. It is registered as a debt and the deceased’s family then need to reciprocate in cash or with an animal of similar value at their guest’s family funeral. A community based payment plan, of sorts.

The three day event was into its middle day, when the masses arrive. Stepping over numerous more pigs lashed to bamboo poles, we emerged onto a rectangular showground of soft clay mud. With traditional Tongkanon style houses and grain stores on both of the longer flanks, the shorter ends housed guests in temporary bamboo pavilions. Each seating area was carefully denoted with a letter, much like a sporting arena and presumably a formal seating plan was in use.

By the time we arrived, the place was bustling with a few hundred people. In the middle of the show ground was the huge bloodied body of a previously sacrificed buffalo. Scattered around were dozens more pigs, also lashed to bamboo poles, whose fate was soon to be that of the buffalo’s. An announcer with a microphone walked between the pigs, standing above each one in turn. In a business-like manner, he consulted notes and thanked the gift-giver responsible before their initials were spray painted onto the less than comfortable looking pig. This continued for some time, all recorded on a TV camera for posterity.

Those in the main funeral party were processed in, led by a spear and shield wielding man with a maniacal laugh. Stepping over trussed pigs, their line slowly snaked into the main bamboo pavilion. Far from being a somber occasion, most attendees seemed to be in good spirits. It was an occasion for all ages and all genders; the whole family and the whole of the local community paying their collective respects.

In the middle of the show ground was a substantial bamboo stake, driven into the ground. Led into the show ground and tied to the stake was a huge, powerful buffalo. To appreciative noises from the crowd, a bare-footed butcher with a sharp curved knife emerged. After some theatrical posturing, he swiped at the throat of the bull. It took a few hacks with the sharp knife, and an attempt to run by the buffalo, before it fell to its knees. Throat cut, the crowd cheered as the buffalo bled substantially and silently to death.

Less enthused by this than the baying crowd, I retreated to join my travel partner, Jen. She had wisely taken leave of the sacrifice for the kitchen coffee shop, which was abuzz with industrious women at work to feed the hundreds, toiling over wood fires and boiling pans. We were very welcome guests, though followed the etiquette of bringing gifts of sweets, as directed by Immanuel. We were asked, as had been the case for most our trip, to take photos of the locals and with the locals, which we gladly obliged. We snacked on coffee and homemade cake, before venturing back outside.

With the sacrificed buffaloes having been burnt to a crisp on the outside with industrial blow torches on the very spot at which they fell, the ‘entertainment’ for the spectators did not stop. The gentlemen close to the deceased entered the show ground to sing their respects. Though only a few words repeated, it was still moving and hypnotic as they stood in a closed circle, singing, facing inwards and swaying in harmony.

Another procession followed. The women from the village, all uniformly dressed, all carrying edible offerings of a less bloody nature, walked in two by two. The mortuary rituals of the Sa’dan Toraja are nothing less than well planned, well choreographed affairs. This was not done for touristic pleasures, as we saw only two other tourists there. 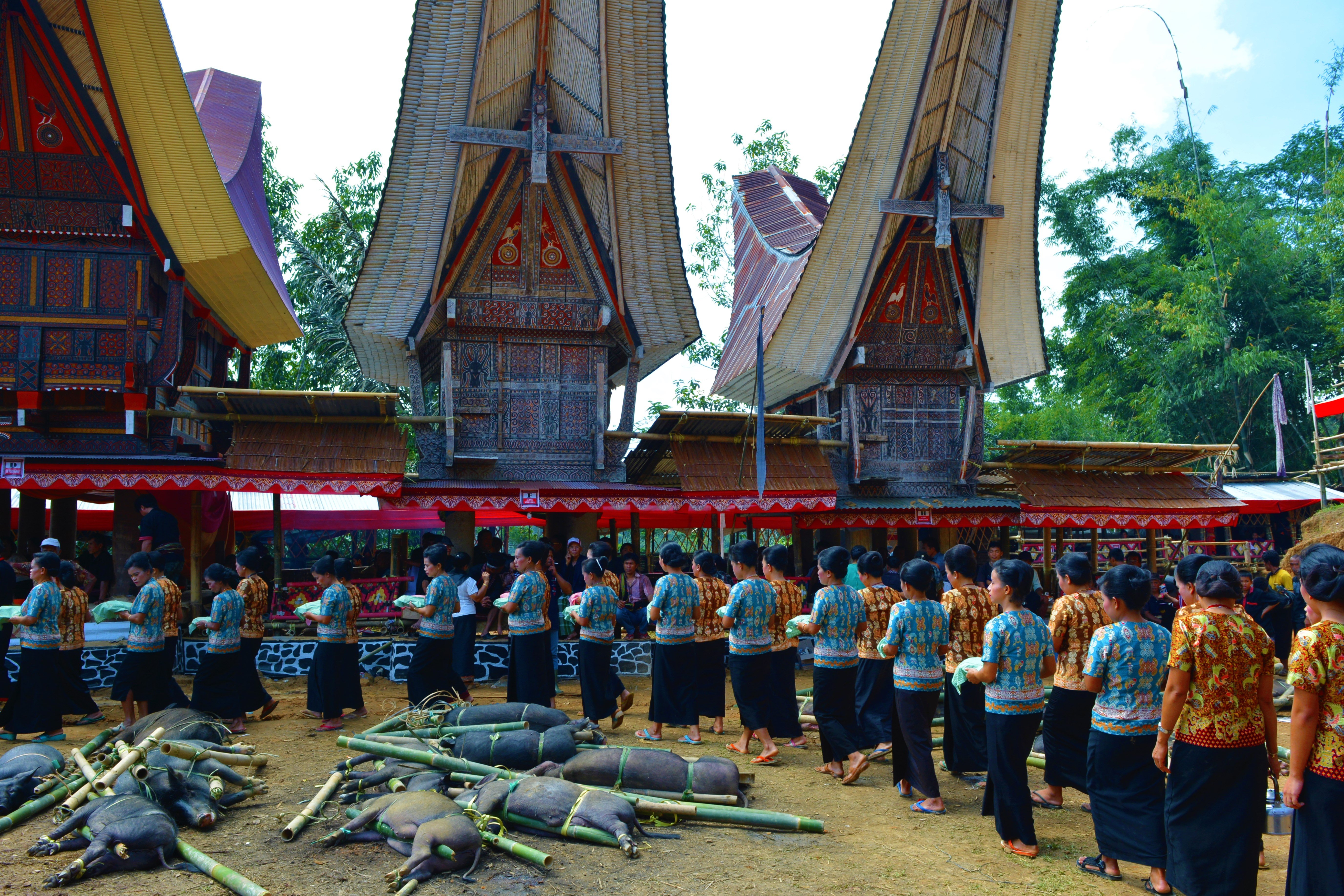 Having spent hours there, entranced by the constant flow of the bizarre and the spectacular, we had to leave for destinations new. Clearly, the ceremony had more to come.  It is hard to think of a much more respectfully vibrant and inclusive ceremony. As death goes, it was far from a dull and dreary affair.