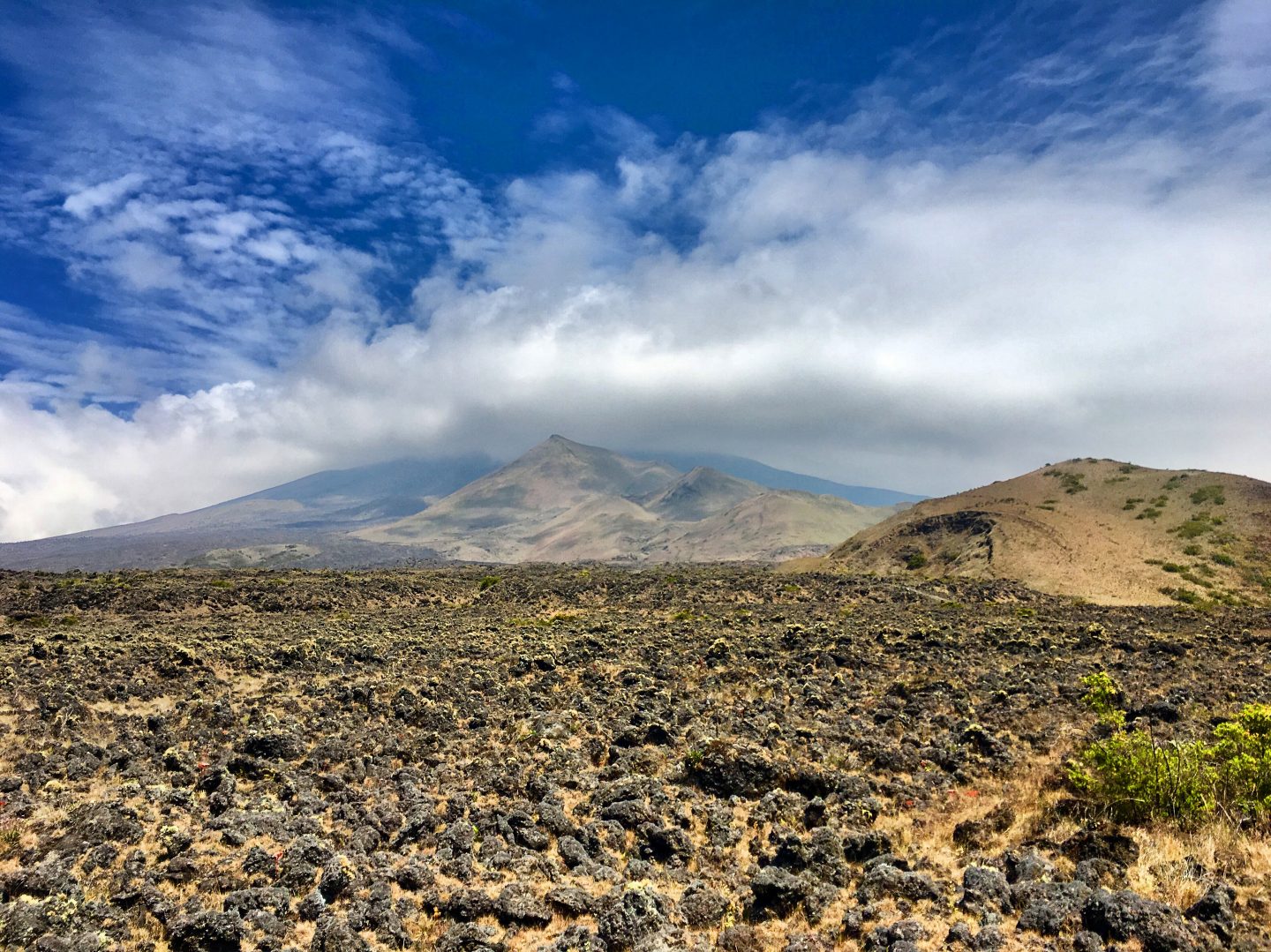 Despite the winds buffeting the tent all night, I slept quite well and roused again shortly before my alarm, set for 5:30am. Dawn was just about thinking of breaking. Noises from the hut suggested the porters and guides were also rising into life. 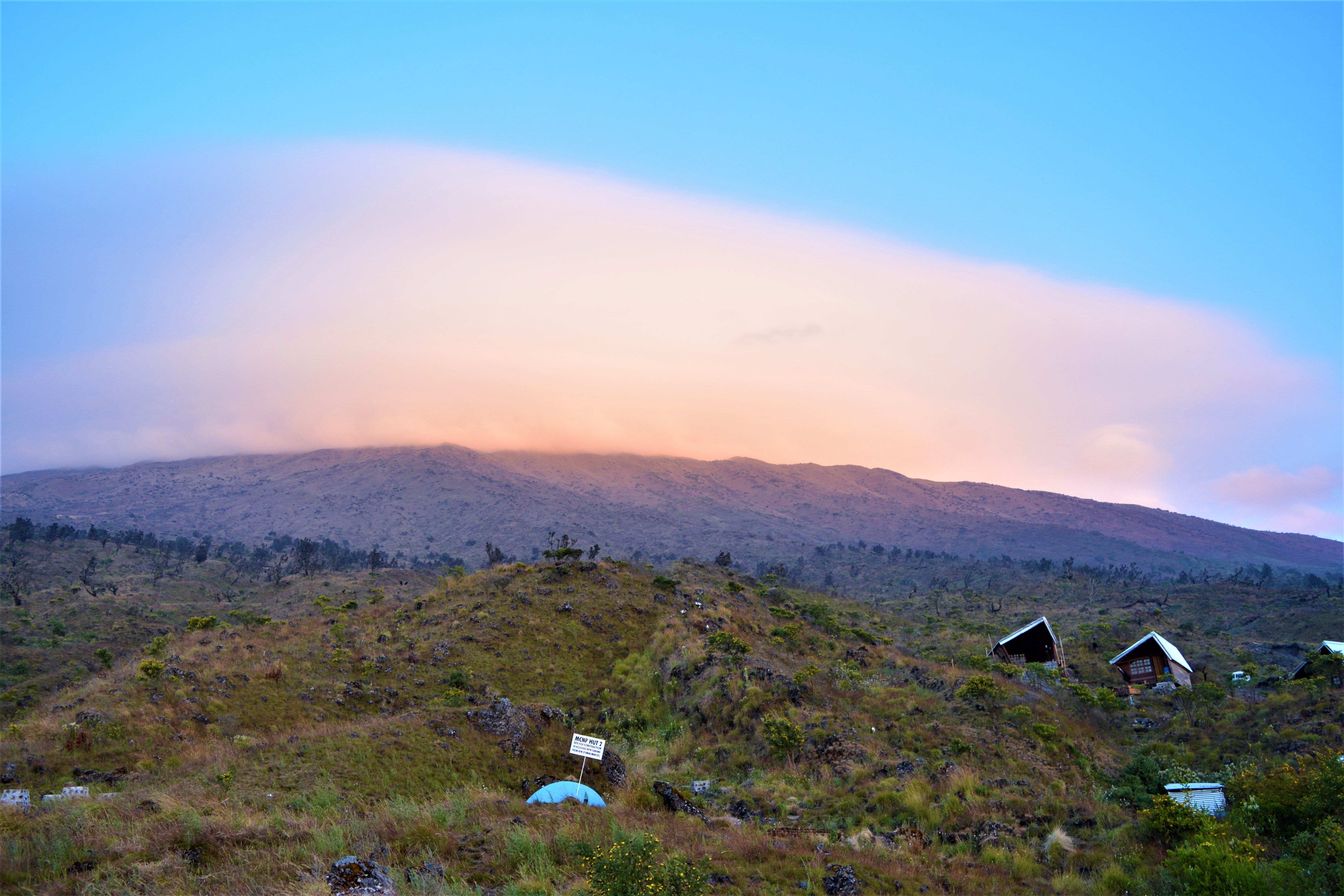 Breakfast was baguettes, boiled eggs, cheese slices, chocolate spread and coffee. Nothing much dehydrated here and I started to wonder about the weight the porters were carrying each day. We left by 6:40am, me leading slowly, as per Hans’ instructions. Despite the altitude and the incessant wind, the sun was upon us and I was warm within minutes.

The gradient was as steep as the preceding day. The path was a rough ridge line, made up of small outcrops of volcanic rock emerging from the grasslands. A daub of white paint every few metres showed the way. There was the odd small tree, hardy enough to withstand the elements up here. Each looked mangled, misshapen by the wind, and covered with wispy pale green lichen.

We rested briefly by the side of a cave opening, presumably a fumarole or vent to the volcano, which was now dank, wet and moss covered. By the time we reached the next false summit, as I had started to regard them, we were well over 3,500m and in dense cold cloud.

To badly paraphrase Victorian adventurer Mary Kingsley in her amusing, “Travels in West Africa,” the light mist that falls upon Mount Cameroon is like a thin veil teasingly covering the face of a beautiful young lady. When the thick cloud rolls in however, such as it had for us, it is more akin to shoving a paper bag over a pretty young lady’s head.

Now in dense cloud, we reached Hut Three (c. 3,700m), a familiarly grubby tin shed, some three hours after setting off that morning. Walking slowly, cold and exhausted, over the volcanic shingle tracks, I caught sight of a familiar outline in the thick mists ahead: the sign at the summit of Fako, the name of the highest peak on Mount Cameroon.

Crouching out of the wind, I shared some chocolate with Hans and took the obligatory celebratory photographs of ourselves. They were the only photographs worth taking for there was no other view but for the tight white cloud enveloping us. Chilled to the bone, Hans rightly insisted we not linger at the summit and that we descend apace. On this occasion he led the way.

Marching forth down the soft volcanic shingle, the clouds thinned to reveal a plateau below. Almost surrounded by peaks, it had a vast cauldron-like feel. When we finally descended the 800m or so to the bottom, it would prove to be a wild combination of savannah grasses and vast lava fields from the 1982 eruption.

We rested briefly in a small gully, with the sun now pleasingly upon us. Not in the mood for resting, I soon persuaded Hans it was time to go. We spent the next hour picking our way through a large lava field, following a path of sorts worn into it. Despite my thick soled shoes, I could just about feel the edges the prickly rocks as I stepped and shimmied up and down the deep undulations. 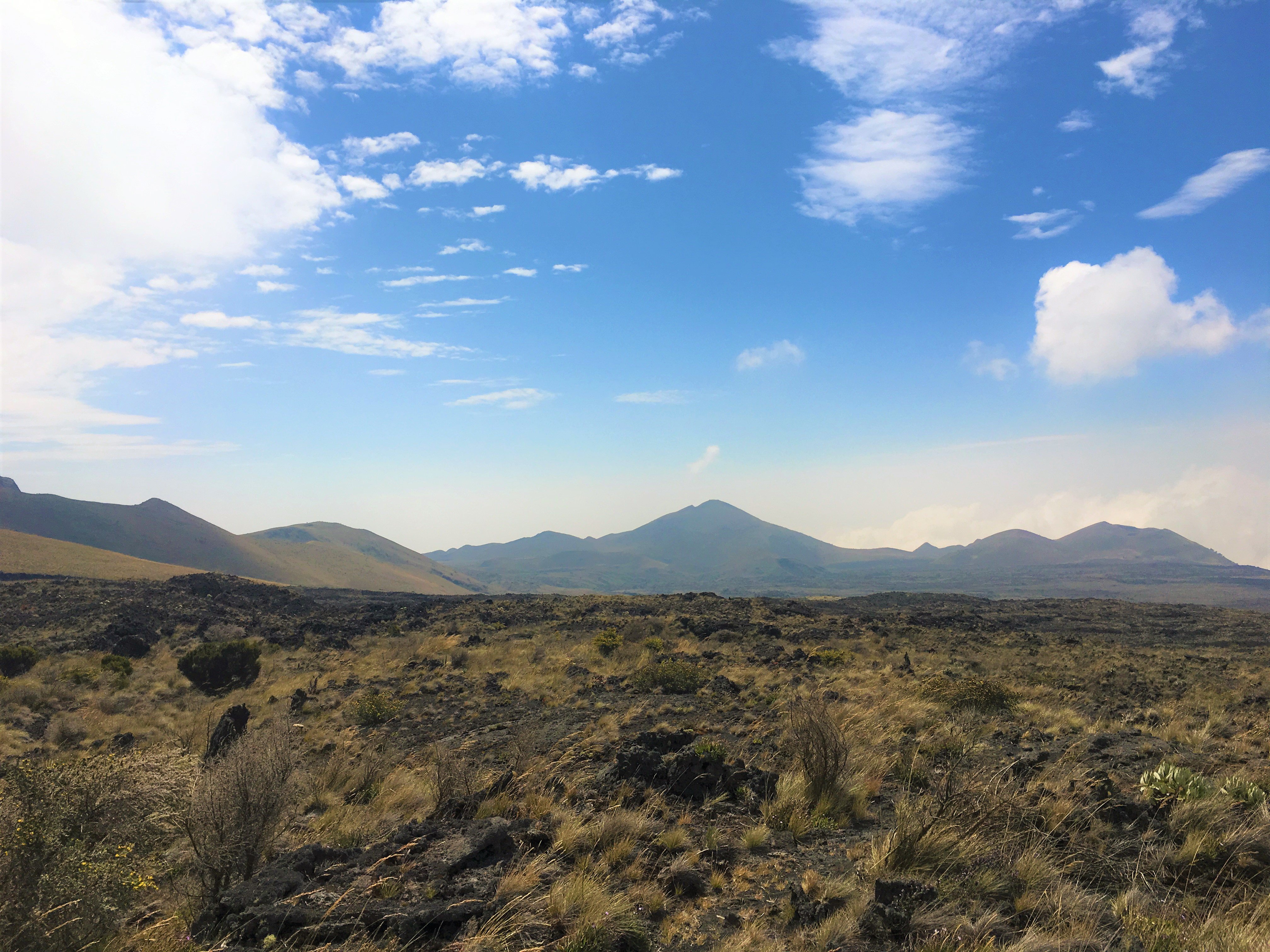 When we finally reached the other side, at the foot of another grass covered rising peak, we stumbled across two of the porters, shading beneath a tall bush. This was Camp One (c. 3,200m) by name, though little apart from some flat ground and the ashes from recent campfires suggested it by nature.

We lolled here for half an hour, still drying out ourselves and some of our gear. The guys chatted in a mélange of English and one or more of the 230 dialects peculiar to Cameroon. Soon enough Hans gave me the nod and we were off again, some five hours walking done and the same again, in time at least, to go. 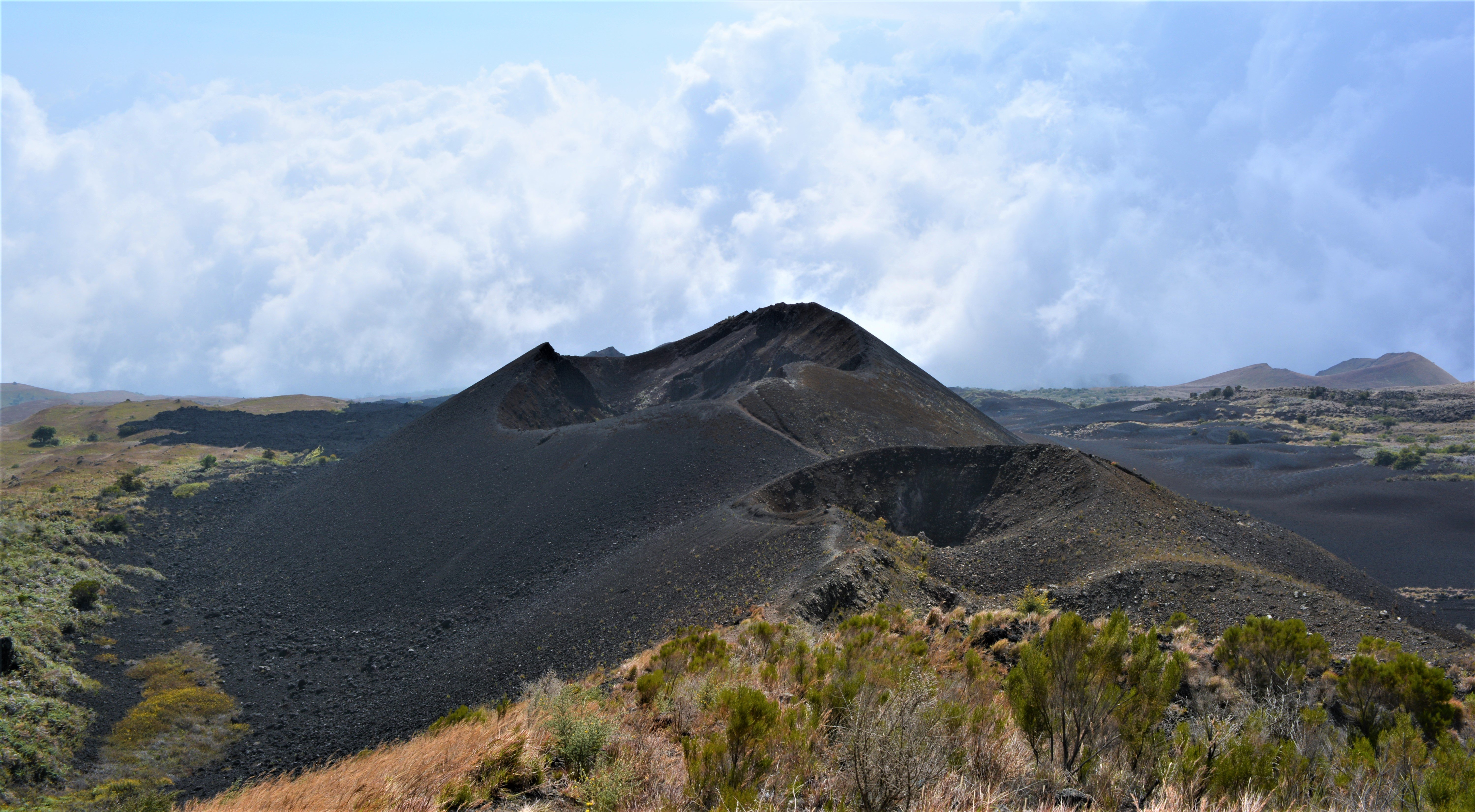 We followed an almost flat trail, through knee high grasses out of the cauldron. Heading downhill, due south, give or take, our next stop were the ‘craters’ (c. 2,600m). The site of the most recent eruptions in 1999 – 2000, they were the blackened conical apexes that one expects of a volcano, albeit some way lower than Mount Cameroon’s summit. We crunched through black volcanic ash like a black sandy beach. Peering inside one of the three craters, reassuringly, it was sealed with rock. Hans had cunningly tucked his trousers inside his socks for this stretch. I only found out at camp that night why, for my legs were covered in thick black volcanic dust, which took a good scrub to remove. 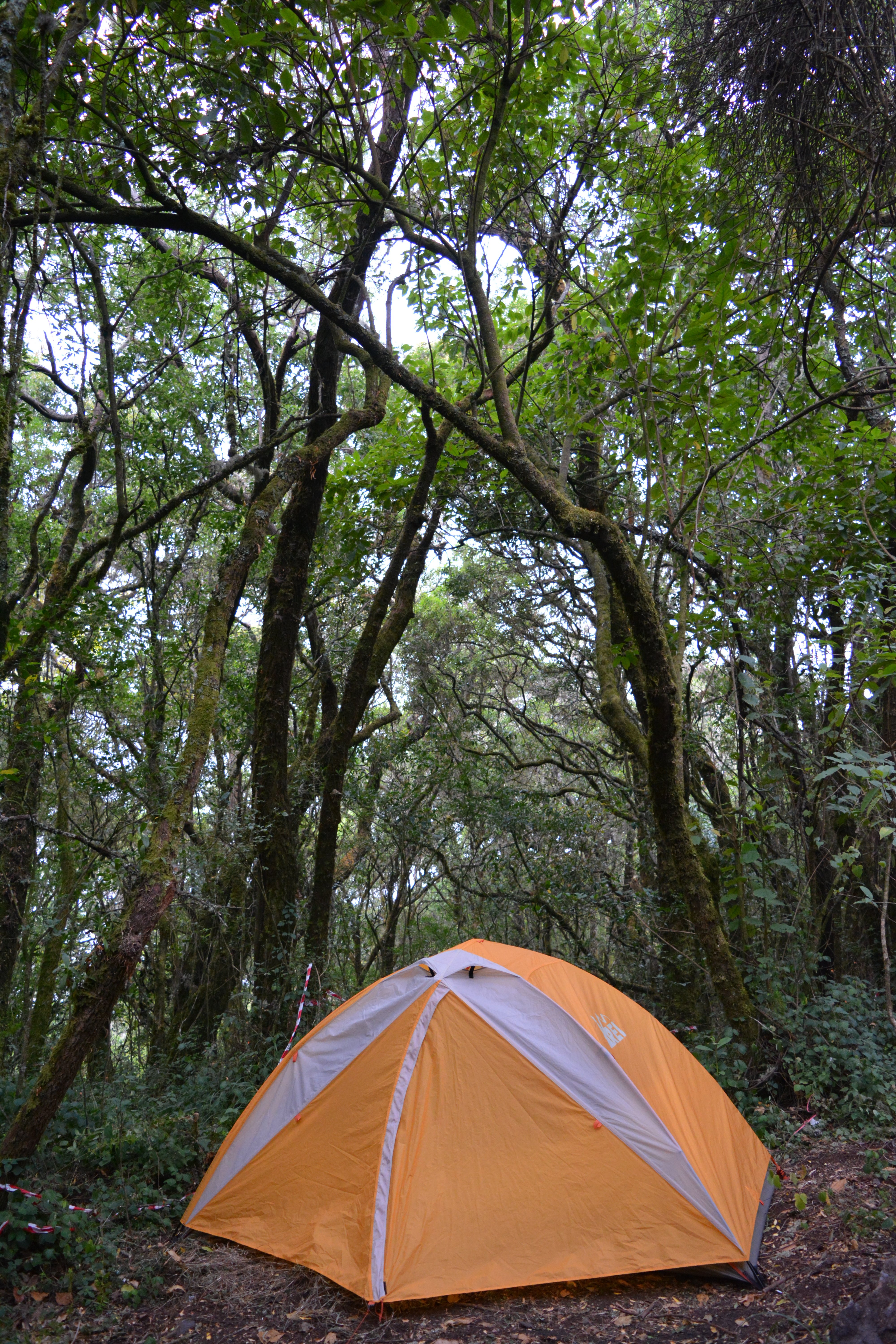 As we steadily descended through more grassland, my feet were starting to ache. The clouds toyed with us, drifting in and out to obscure our view. A little over nine hours after we started, we tumbled into Mann’s Spring Camp (c. 2,400m), our home for the night. Here too, peculiar shaped cabins were under construction. We weaved our way into the woods to find an oft used clearing. Hans immediately set to lighting a fire. I immediately set to loosening my laces and lying down.

It took many more hours for everyone to finish today’s punishing day and I was only too glad to see my tent arrive and smell that dinner was underway. This time, a feast of fried plantain and a smoked fish spaghetti stew. I saw off a couple of generous platefuls before I spotted a rat sniffing around the cooking pot, which dinted my appetite. Some fresh pineapple was enough to sate me and send me to bed at around 8pm again.

Though exhausted, I was immensely satisfied with the day’s achievements and the variety of terrain we had crossed. I had also come to a new, more reverential, understanding of the great Mongo.