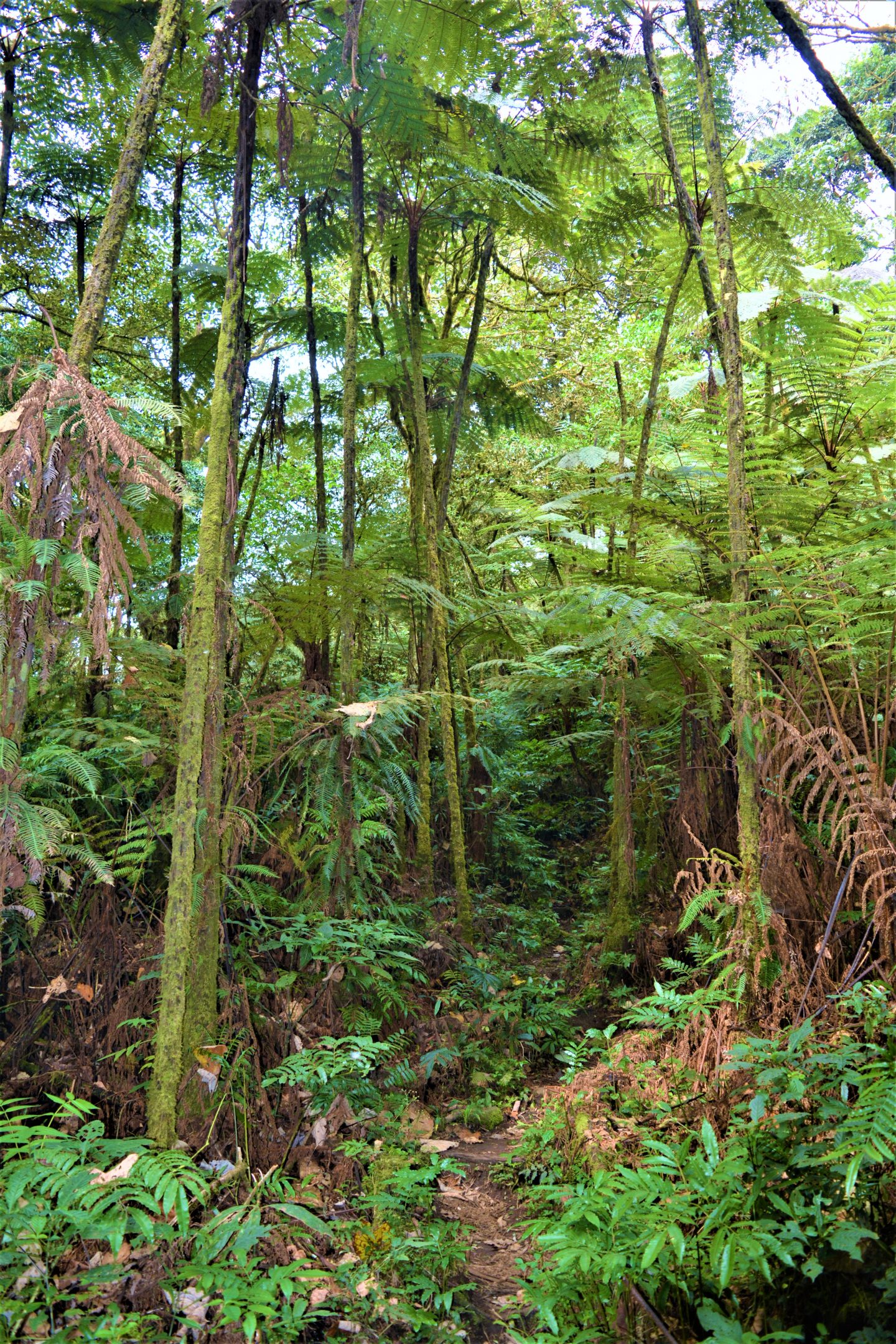 I slept better, wholly due to exhaustion I’m sure, waking only once at 5am as someone briefly chopped wood. Presumably that was to replenish the fire around which most of the guides and porters had opted to sleep. The guys served up another fulsome breakfast, though the baguettes had now seen fresher, fluffier days. It amazed me that the porters had managed to carry fresh eggs this far and not break any (or break so many that I was deprived of my statutory two boiled eggs). 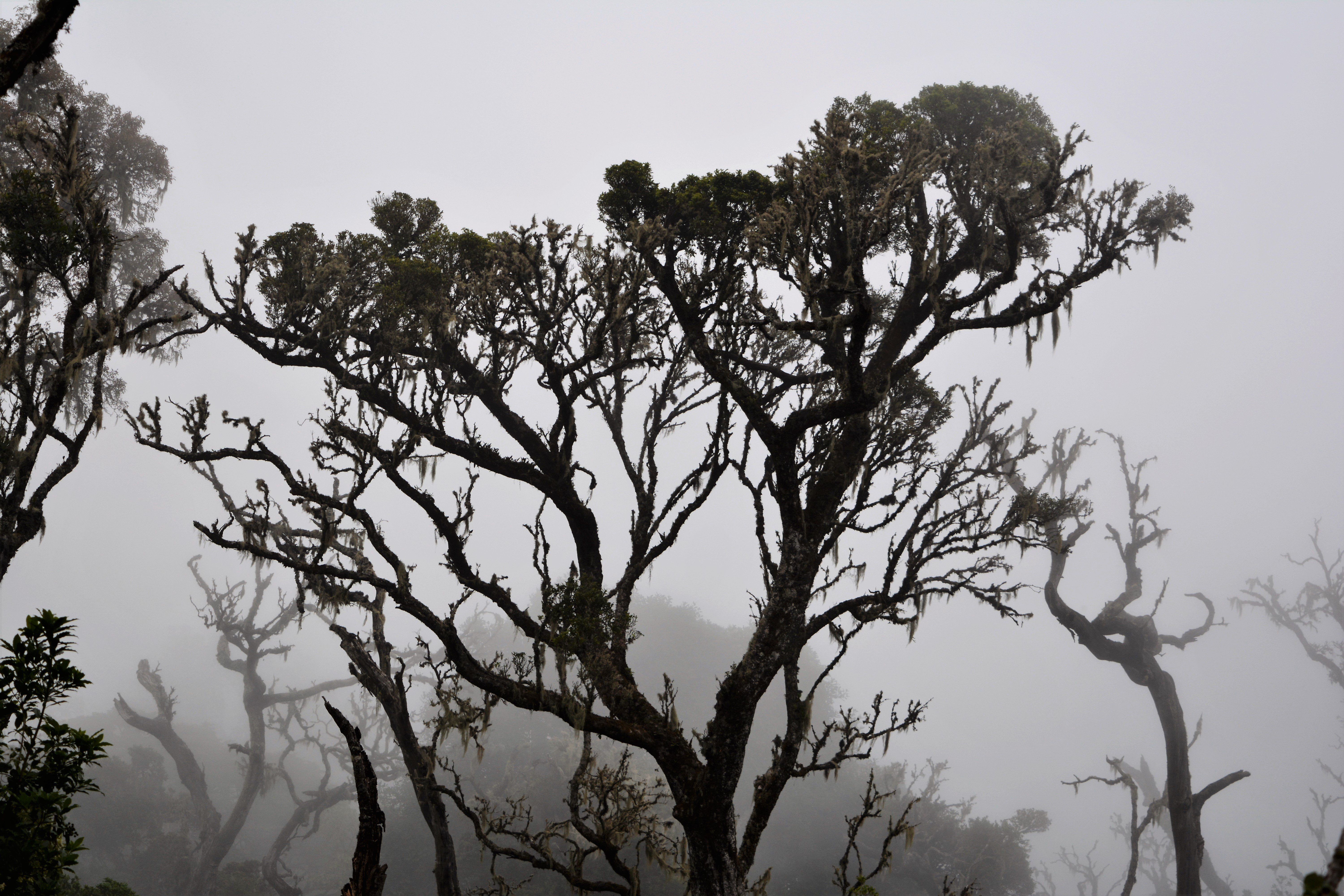 By 6:30am we were on our way for what was certainly going to be a comparatively easy day. We emerged from the Mann’s Spring wood relatively quickly. Parts of the wood were rather eerie silhouettes of either dead or deciduous trees in the misty halflight. Bare of leaves, the skeletal trees were nonetheless home to vines, ferns and lichen slowly smothering them. 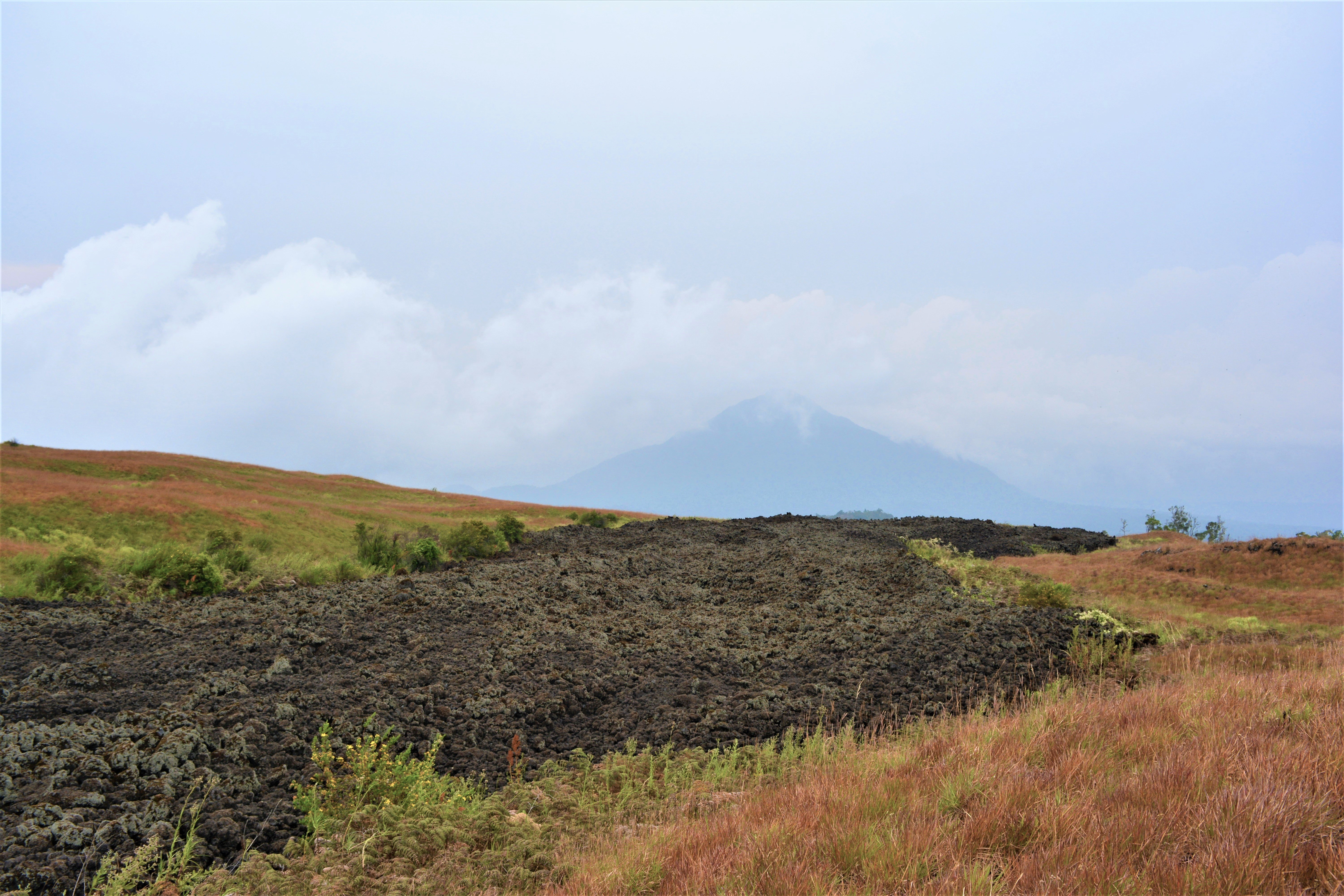 Crossing undulating hillside, it was again long grasses, occasional outcrops of rock and sporadic trees, growing askew, bent double by the incessant winds. In the distance and veiled by the mist, was the perfectly conical ‘Little Mount Cameroon.’ An hour or so out of camp, we came across an incongruous lava flow. A rocky river now frozen for eternity, it ran in uniform width from as far as the eye could up the slope to our left and down the slope to our right.

Duly crossed, we continued towards the jungle’s edge. Hans was slowing the pace, picking wild mint to make fresh mint tea when he got home. This softer side of Hans, the serious mountain man, put a smile on my face. 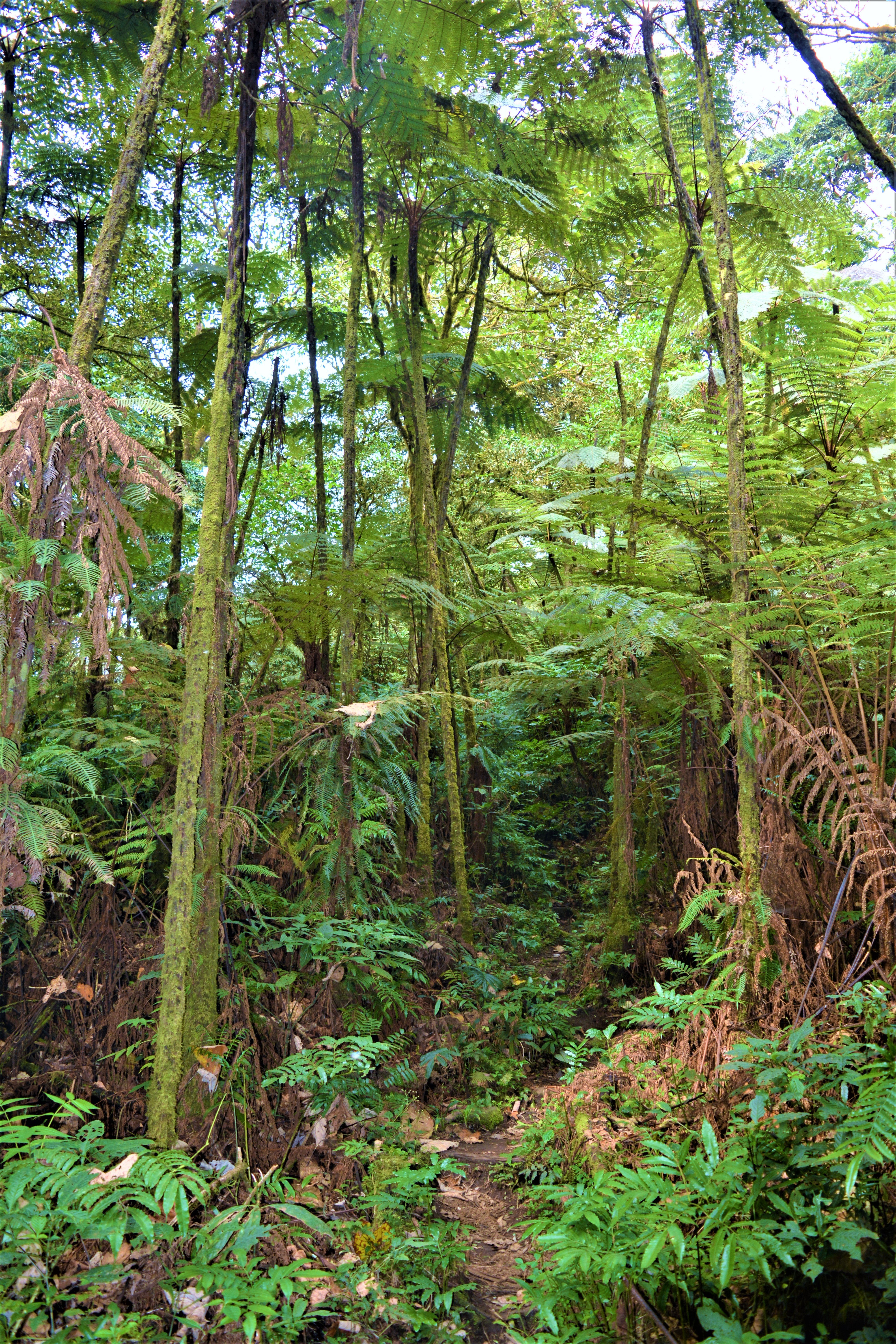 Enveloped once again by the tree canopy and surrounded by the gentle buzz and chirp of insects, the path was a knotted mess of damp tree roots. Picking a foothold for each step made for slow going and honed my acrobatic skills. Pretty soon we were damp from the shoulder high leaves and ferns, gently depositing trickles of rain water onto us.

Three hot and humid hours later, as the density of the jungle started to pull back, we began to spot clearings with small fields of cocoa, plantain and other crops. Eventually, a farmer, then two with an inquisitive dog: civilisation, of sorts. The path firmed under foot and widened, then a house appeared on the horizon.

Giddy with the finish line in sight, I picked up the pace. We walked through the village of Bokwango, emerging from a country track onto the dead-end of a quiet tarmac road, which stopped abruptly where our track began. Fortuitously, there was a small ‘spit and sawdust’ bar right there, already open at 11am on a Tuesday.

Soggy and exhausted, Hans and I sat outside the bar in the comfortable silence that had been the norm over the last three days. Two cold celebratory bottles of local ‘33’ Export beer arrived, with another deposited on the table with every porter that arrived. As the beer flowed, satisfied smiles abounded, all pleased with fruits of our labour.

Later that day, once showered and into welcome clean clothes, I sat in my hotel and stared up at Mount Cameroon. No longer as an adversary, the great Mongo had been a huge challenge but was now an old friend to whom I had to bid a fond farewell. 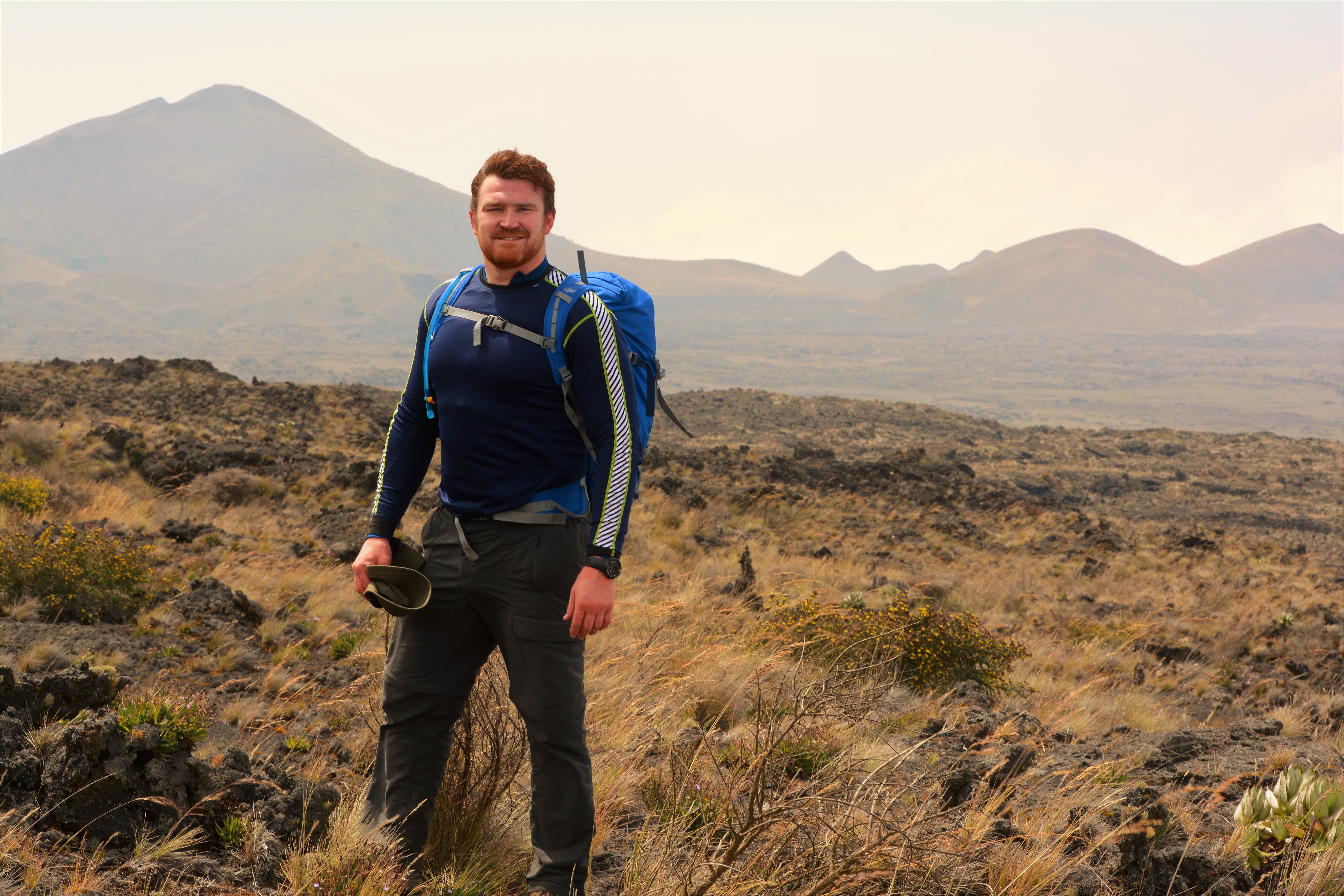