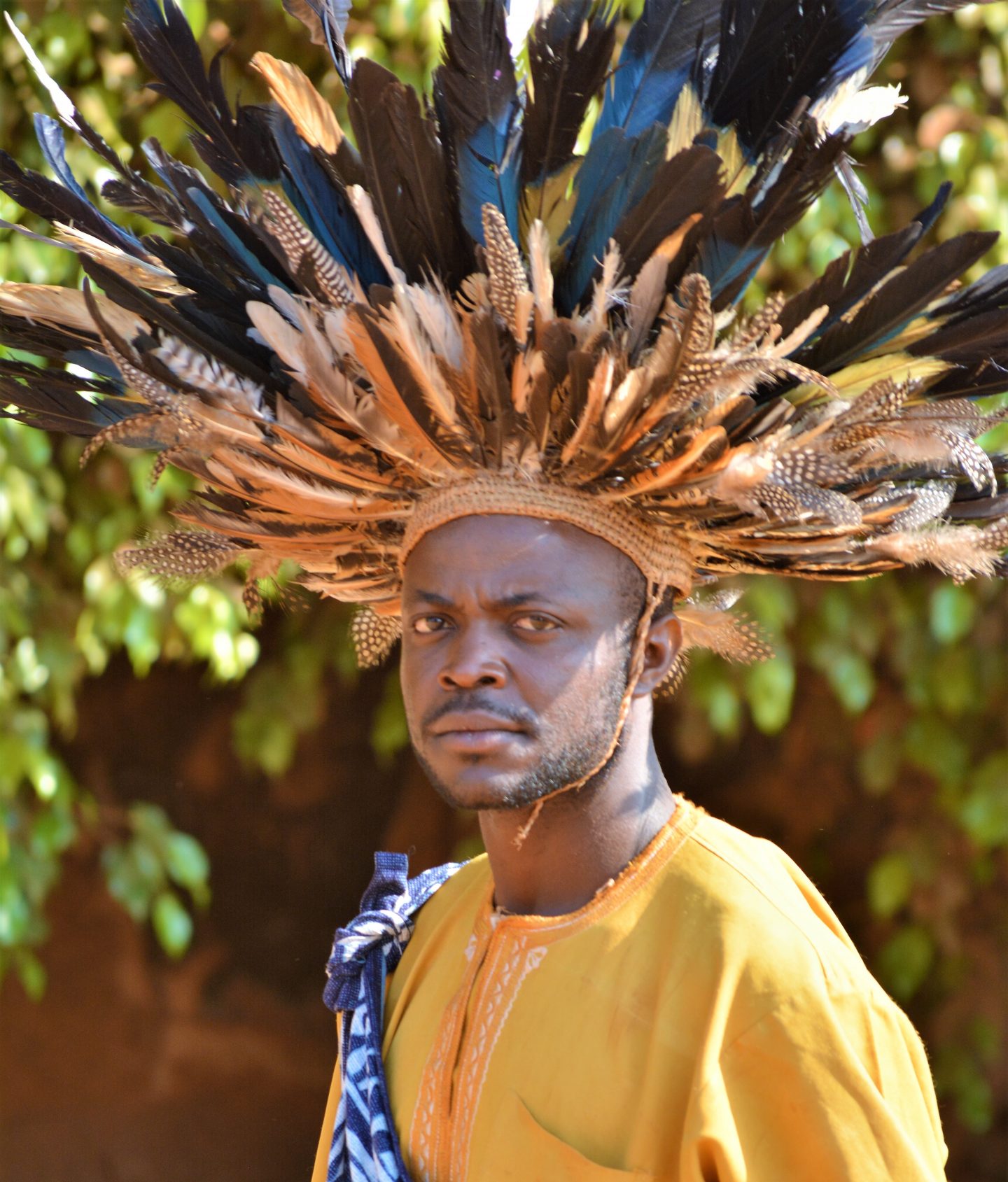 Dawn was greeted with the beating of drums by the Sultan’s ceremonial guard. Rousing the dusty red town of into life, it was the final day of the week long Nguon Festival in Foumban, north west Cameroon. The previous six days had seen various cultural and sporting displays. Amid much pomp and ceremony, the Sultan of the Bamoun Kingdom had been ceremonially deposed the day before and reinstated once again by sunset. Today’s finale was a tribal celebration of a scale and vivacity the like of which I have not witnessed before. 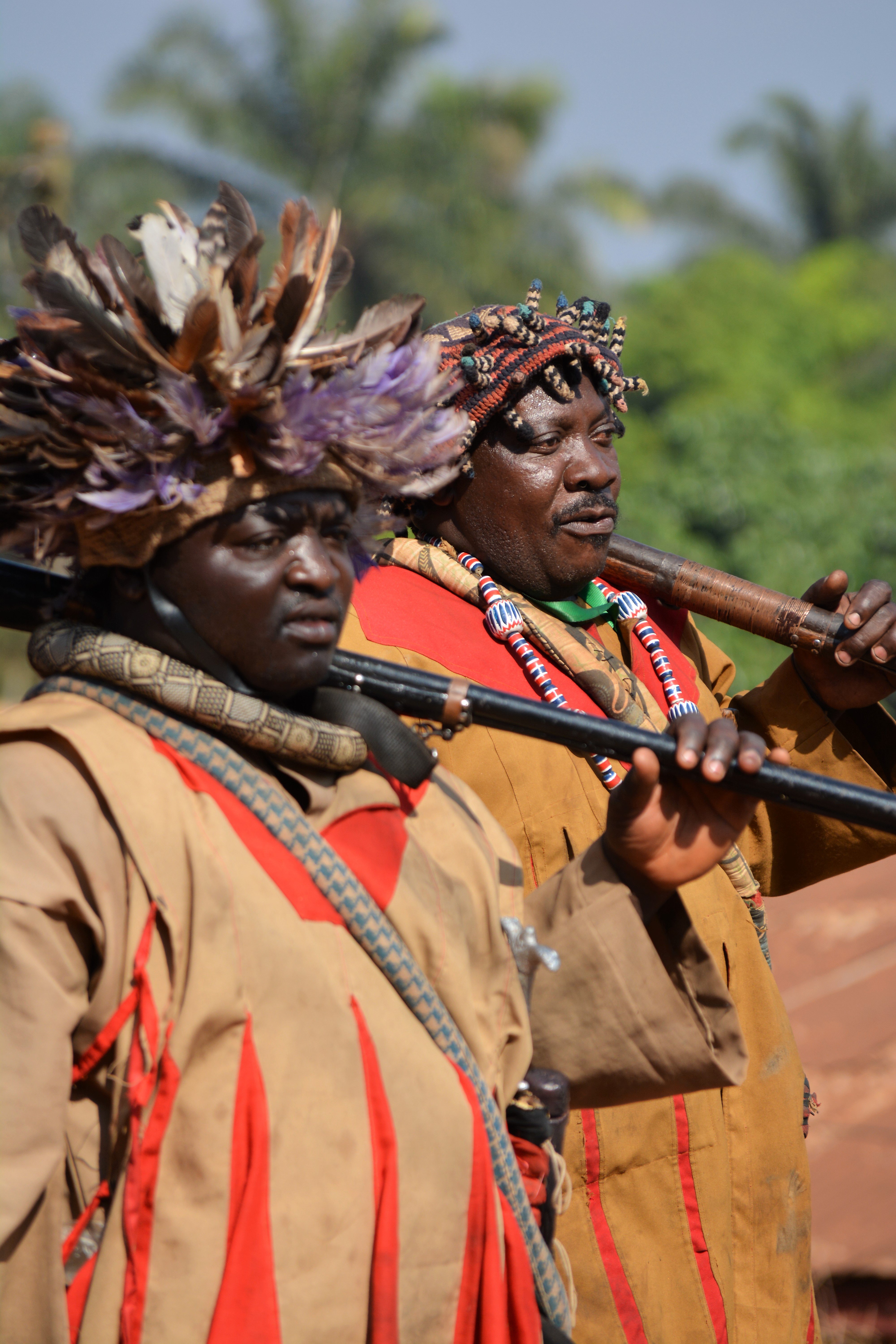 Should the drums not have woken the slumbering, the guards then fired their aging rifles skywards. As the palls of grey smoke slowly dispersed, the guardsmen followed up by brandishing their broad, almost rectangular, rusting swords. Clashing them slowly and purposefully with each fellow guardsman above their heads, it was a ritual salute I would see numerous times that day.

Over the next hour, a vast number of locals congregated in front of the Sultan’s Palais des Rois Bamoun. Many would have traveled great distances for this occasion, for it is a biennial event held in late November (2016, 2018, 2020…). Congregating with either their tribe, village or group of friends, they all slowly processed to the Porte de’Entrée (City Gates).

The wide tarmac road was soon over flowing with thousands of people, steadily moving to the soundtrack of chanting, the beat of drums, the sound of a horn and occasionally the deafening blast from an aging rifle fired skywards.

Far from regimented in dress, every participant had their own costume and part to play. Village and tribal elders walked in a line, with the most senior in the front and lines of four or more of the retinue behind. Though the elders were in formal dress, those tightly packed behind were often in costumes depicting tribal roles and stories. Adornments of small animal skulls were common place. Equally so were large animal horns, worn upon their heads. In front of some village elder groups were a couple of strong men, to ensure smooth passage for their delegation.

Filling in the gaps around the waves of village elders were numerous stories of tribal lore being acted out, particularly by groups of boys and young men in make-shift costumes. The amorphous mass of people was one huge immersive theatre of numerous cultural plays woven together as they all ambled along.

The roaming sub plots acted out such skits as wounded or impoverished travellers carrying old fashioned suitcases, military personnel, couples on their wedding day requiring at least one young man to cross dress, and would-be film crews with improvised video cameras and microphones to name but a few. Those not in costume wore traditional feathered headdresses of exotic plumage. Painted on numerous arms and faces, was a simple circle with overlapping ends, representing the double headed snake; the emblem of the Bamoun Kingdom.

For an event of such fantastic size, colour and authenticity, there were few obvious tourists watching from the sides of the street. Quite how this event has escaped the attention of tour companies and guide books is astonishing. I was free to mingle and wander in amongst the masses. Whilst photographing the spectacle’s participants was greeted warmly, and often requested, slowing or blocking the processional path, even momentarily to take a photograph, was received very badly indeed. 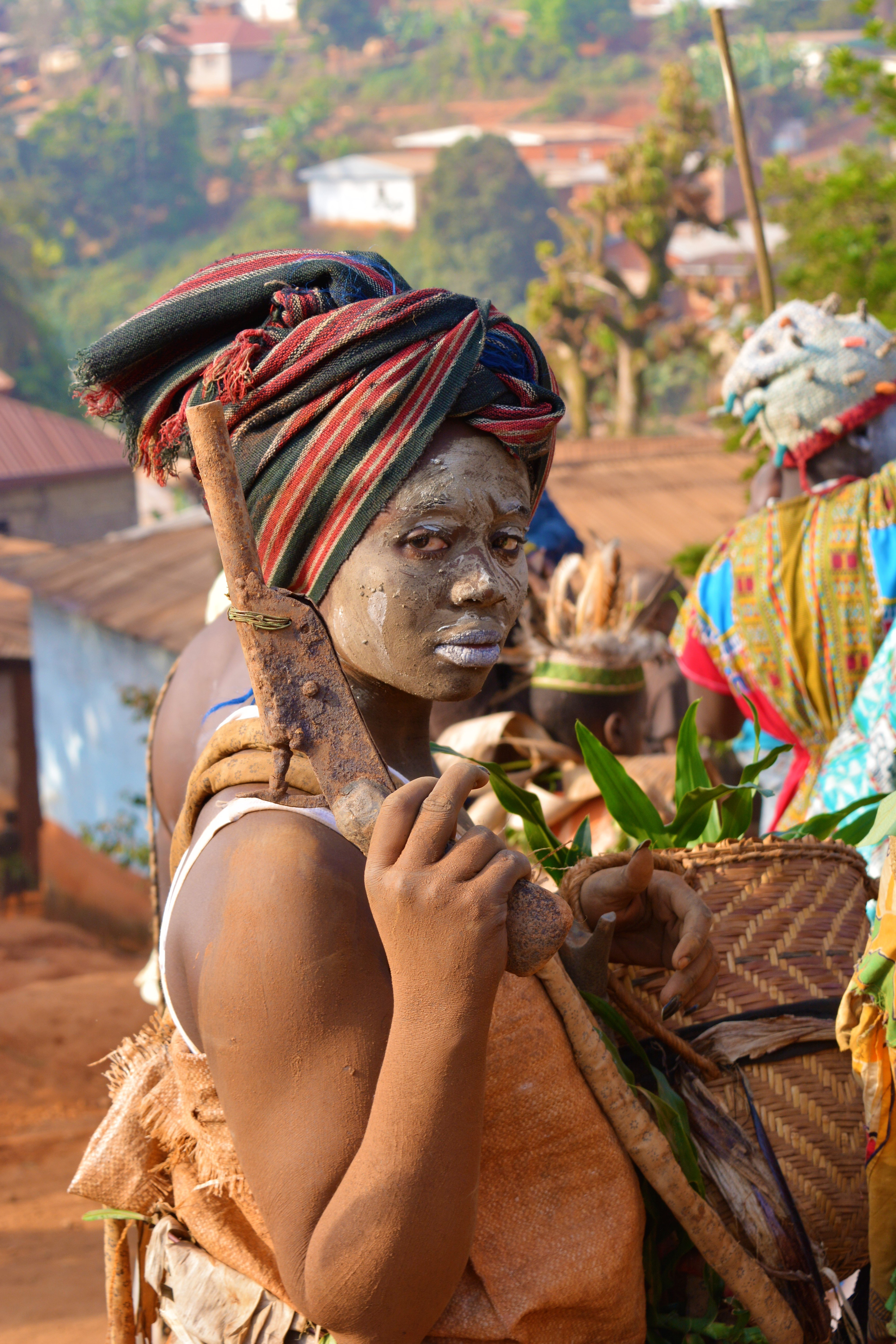 The masses reconvened again outside the Palais to witness the Nguon Festival’s final act: a horseback re-enactment of a historic battle scene. Amid the crush of thousands, all trying to better their vantage point, I took my leave.

As the sound of the crowd faded and the rifle fire more distant, it became apparent to me that the Nguon Festival is something special. Not just because of the extraordinary array of costumes and theatrics but because of who the audience is for this performance. Many cultural festivals and exposés are outward looking money-making enterprises, designed to draw in the lucrative tourist trade. The Nguon Festival however, slips purposefully under the radar.

The Festival, and its reaffirmation of the Bamoun cultural heritage, is inward looking and for the benefit of the Bamoun people themselves. It is that which makes the Nguon Festival quite so raw, unadulterated and such a joyous spectacle to behold.

The author visited Cameroon at his own cost. This section of the trip was arranged by Peter Buma of Ecotours Cameroon, whom the author is sadly unable to recommend to fellow travellers.