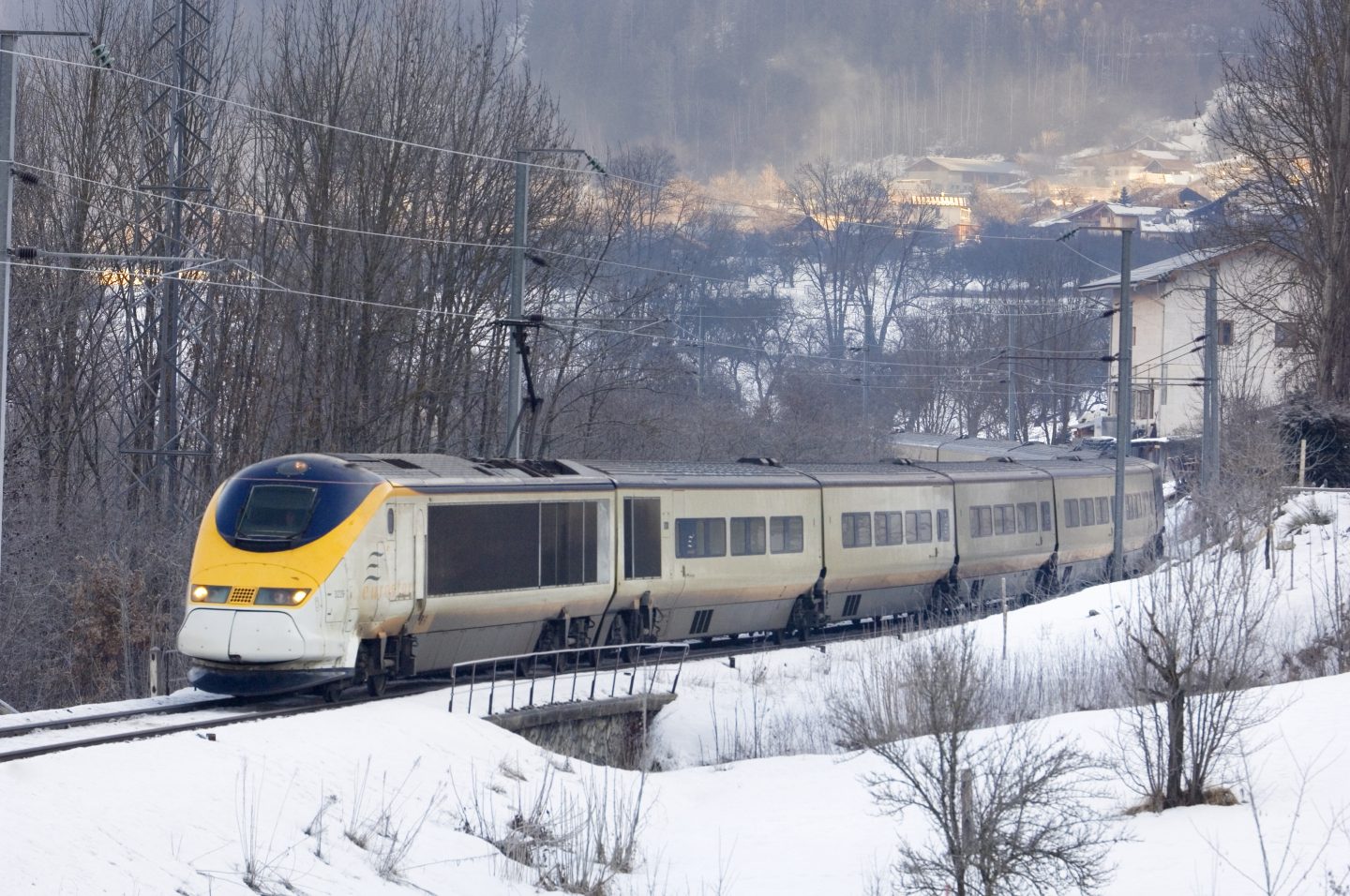 Choosing how to get to the Alps for a ski holiday is a lot like choosing which ski run to take: the green and blue pistes might be easy and predictable, but the more adventurous red and black routes may just get you there faster, potentially with a few more bumps along the way.

Eurostar runs a weekly Friday night ski train service departing London St Pancras International at 19:45 and arriving into Moûtiers at 05:32 and Bourg-St-Maurice at 06:16, in the heart of the French Alps, the next morning. By travelling overnight, the rail route has some distinct advantages. First and foremost, of expanding your holiday to 8 days straight skiing: two full Saturday ‘change-over days’ when it is quieter on the slopes, as everyone else is in the air and on the roads. There are also no airline style bag limits: you can take two large bags onboard, as well as a pair of skis or snowboard. The overnight service is not the smoothest of pistes, however, as I found out. 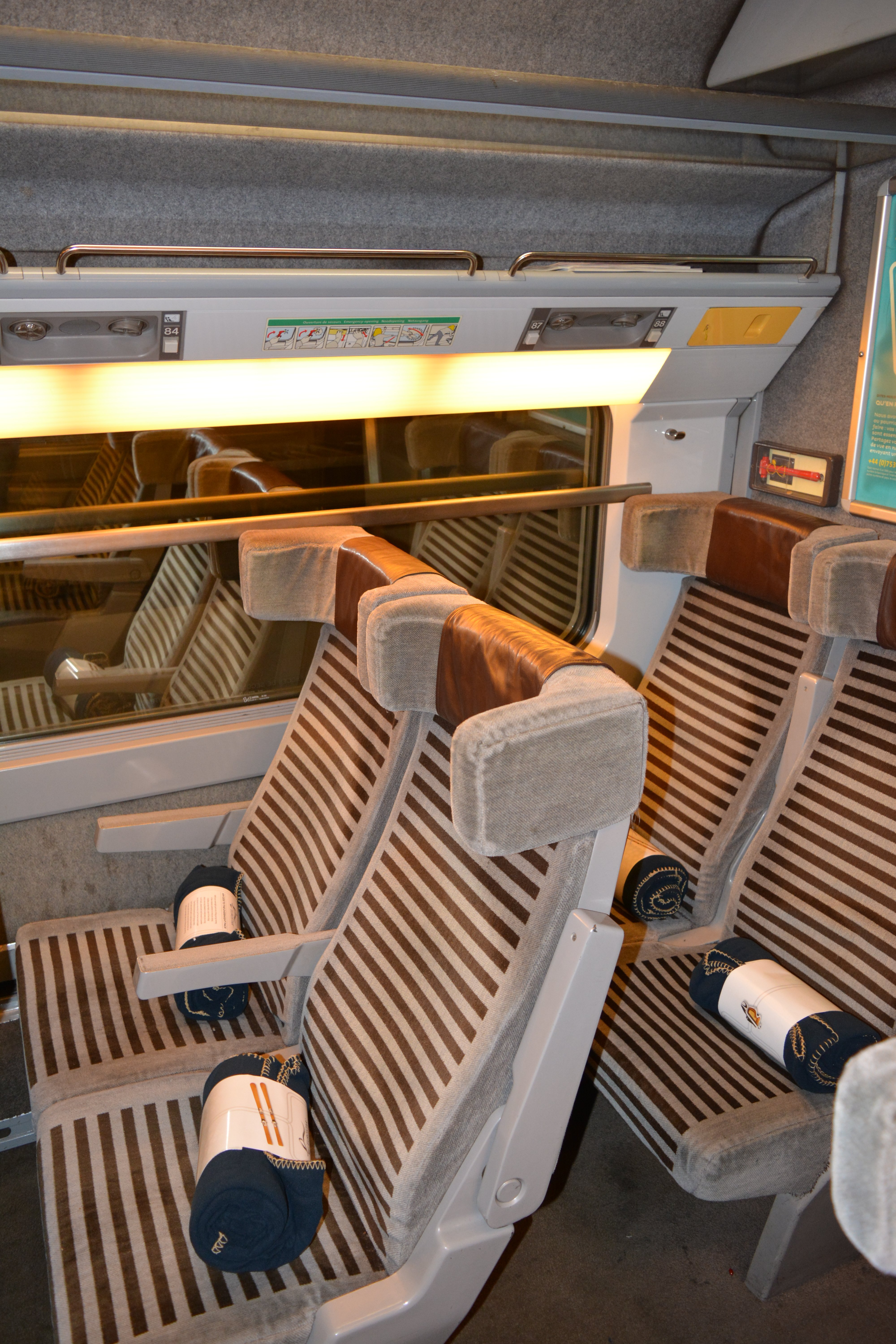 As we pulled out of St Pancras, our ‘Standard’ carriage was rammed with groups of excited skiers and snowboarders. The luggage vestibules and overhead racks were stuffed to over flowing with big winter coats and elongated kit bags. Helpfully, two sets of seats per carriage were covered and reserved for vertically stacking the extra long bags of skis and snowboards. Excited chatter of escapades on ski slopes past and future filled any remaining space.

The mere mention of the “ski train” still evokes third hand anecdotes of drinking and reveling in the ‘party carriage’ through the night, enroute to the slopes. The party train was a place where amorous relationships of a short, and occasionally longer, term nature were often spurred into life as the train rocked, helpfully throwing unsuspecting passengers together.

Since the recent reintroduction of the ski train, bringing alcohol on board the night service is now firmly prohibited. The standard pre-boarding security searches pluck bottles and cans of alcohol out of passengers’ luggage with ease.

Where there is a will, there is a way, however. In the rather stark “Café Métropole” carriage, offering up food ‘til midnight, a couple of rather motley groups of passengers convened. With decreasing levels of subtilty, they topped up plastic cups of Coke cola from opaque water bottles containing anything but water. As their inebriation levels rose merrily, Eurostar staff kept a close but ultimately non-interventionist watch. 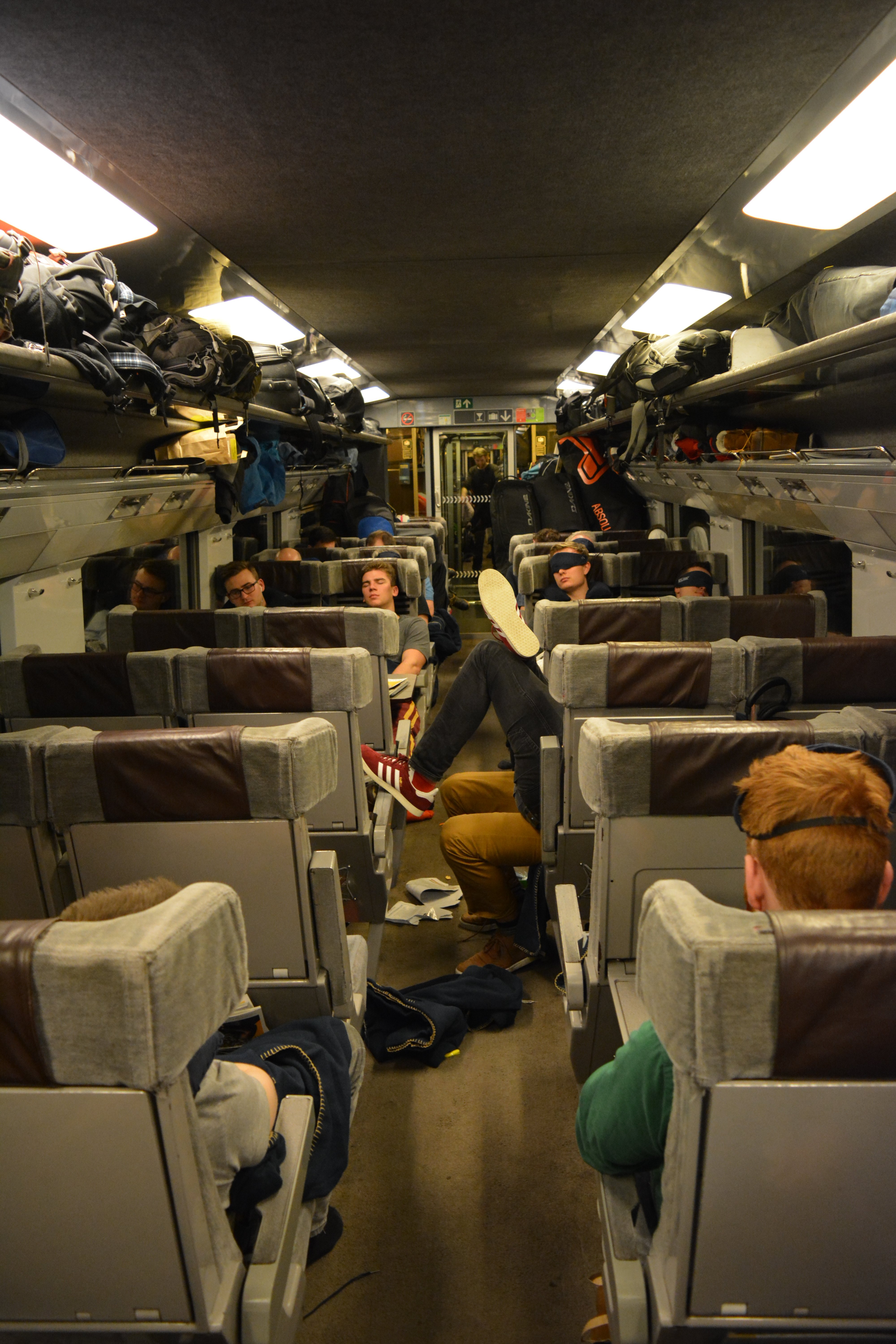 The midnight hour passed and back in the constantly well-lit seated carriages, feet and limbs were projecting at all angles, as passengers endeavoured to find some way to sleep in the distinctly rigid upright chairs. Though the complimentary blanket, eye mask and inflatable headrest from Eurostar were a nice touch, there is no hiding from the fact that the train is designed for the city sprints of a few hours between London and Paris, etc. and not ‘long haul’ overnight journeys.

By 2am I had given up on my seat and copied others, lying flat out on the carriage floor, across the aisle and beneath the seats of my group of friends. Fitful sleep ensued, as it did for most of the carriage.

Alighting in Moûtiers shortly before dawn, a blast of chilled mountain air welcomed us and helped banish any sleep deprived grumbles. By 9am that Saturday morning, we were on the slopes; hours or even a day ahead of those flying and driving to the Alps. The overnight ski train had taken us from our desks in London to the slopes of the French Alps in but a few blinks of a sleepy eye.

After a full day of skiing and snowboarding on the following Saturday, Moûtiers station mounted a relaxed international departure process for the overnight train home. The long single file queue of exhausted skiers snaked through the deserted station, to have their passport checked, bags scanned and wait on the platform. Armed guards in military fatigues, large floppy berets and body armour kept conspicuous watch over the sunburnt masses, shuffling their way through.

I had decided to upgrade to “Standard Premier” for the return journey, in the expectation of some hot food and a better chance of sleeping. Pulling in a little after its scheduled 22:54 departure time, the mood for our carriage was immediately improved by the irrepressible and irreverently humorous Thierry, the carriage manager.

“Ooh, now that is a good seat, Mr Jarvis!” He said with a twinkle in his eye, as he checked my ticket. “On your left, half way down the carriage.” As I climbed the steps to the train, I could hear Thierry behind me, at it again, “Haven’t you done well? That’s a lovely pair of seats you’ve got there…”

The carriage was slightly more spacious, with a few less seats. Each had a table and a USB and plug sockets (unlike in Standard on the way out, which had none). Given the extra space, I suspected there would be less jauntily angled limbs and protruding feet in search of restful slumber. This was also because any such contortions were beyond the flexibility of the carriage’s mostly middle aged and elderly occupants. 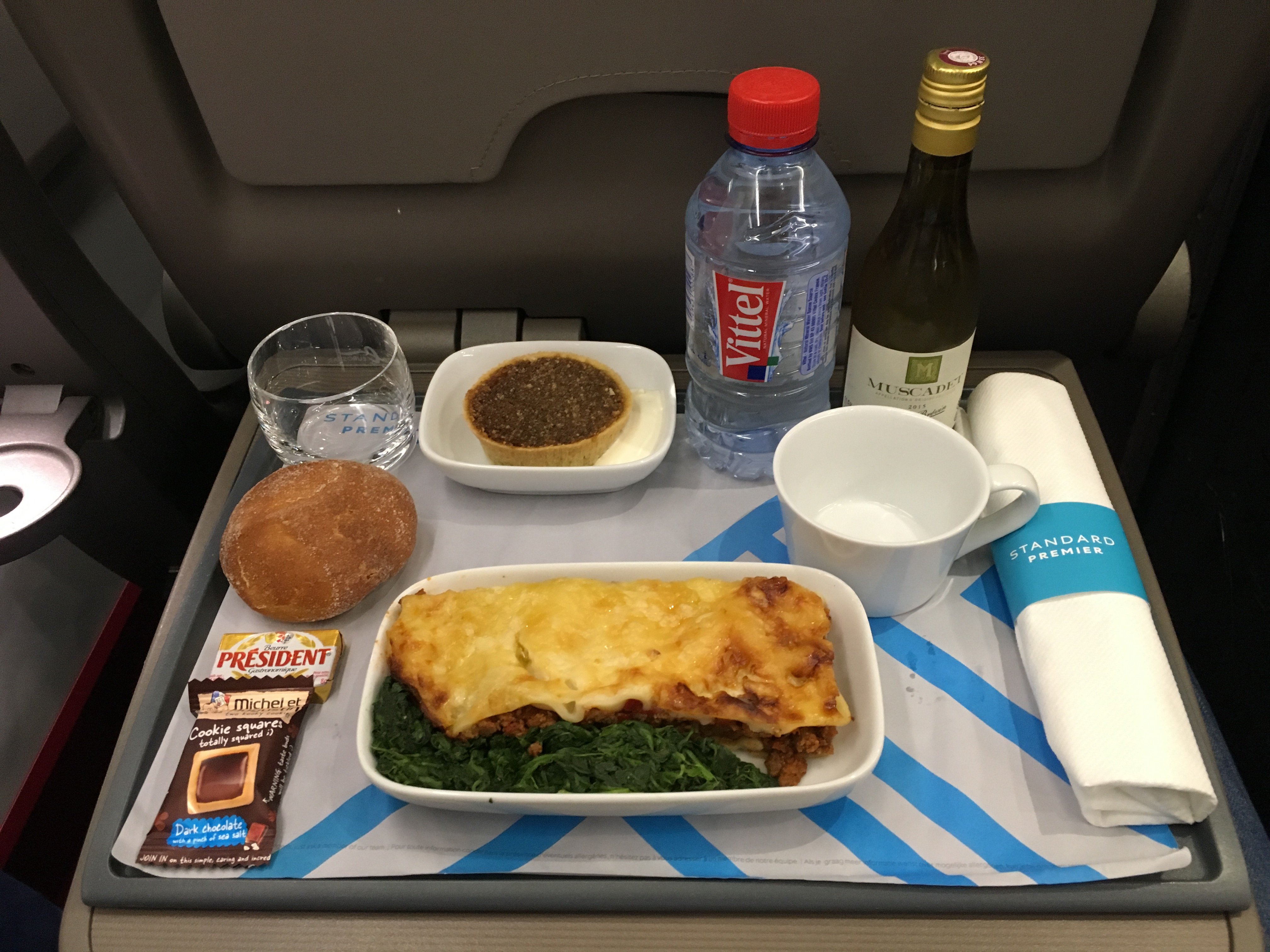 Around half an hour after pulling out of Moûtiers, Thierry was back, and on witty form, serving a hot meal. The choice was of two decent looking dishes of mushroom risotto or a beef lasagne, with a glass of wine or a beer. Thierry’s favoured line was explaining earnestly, “please be warned, the beef lasagna does contain beef.” Clearly it is all in the delivery, as it got a smile or a chuckle out of most, myself included.

Once the dishes were cleared away, the carriage lights were vaguely dimmed and much needed sleep was due. Unlike the near silent carriage of youngsters in ‘Standard’ on the way out, my fellow travelers on the return journey created a veritable orchestral movement of blocked sinuses and obstructed airways. Ear plugs in, I began a fitful slumber, never truly comfortable. 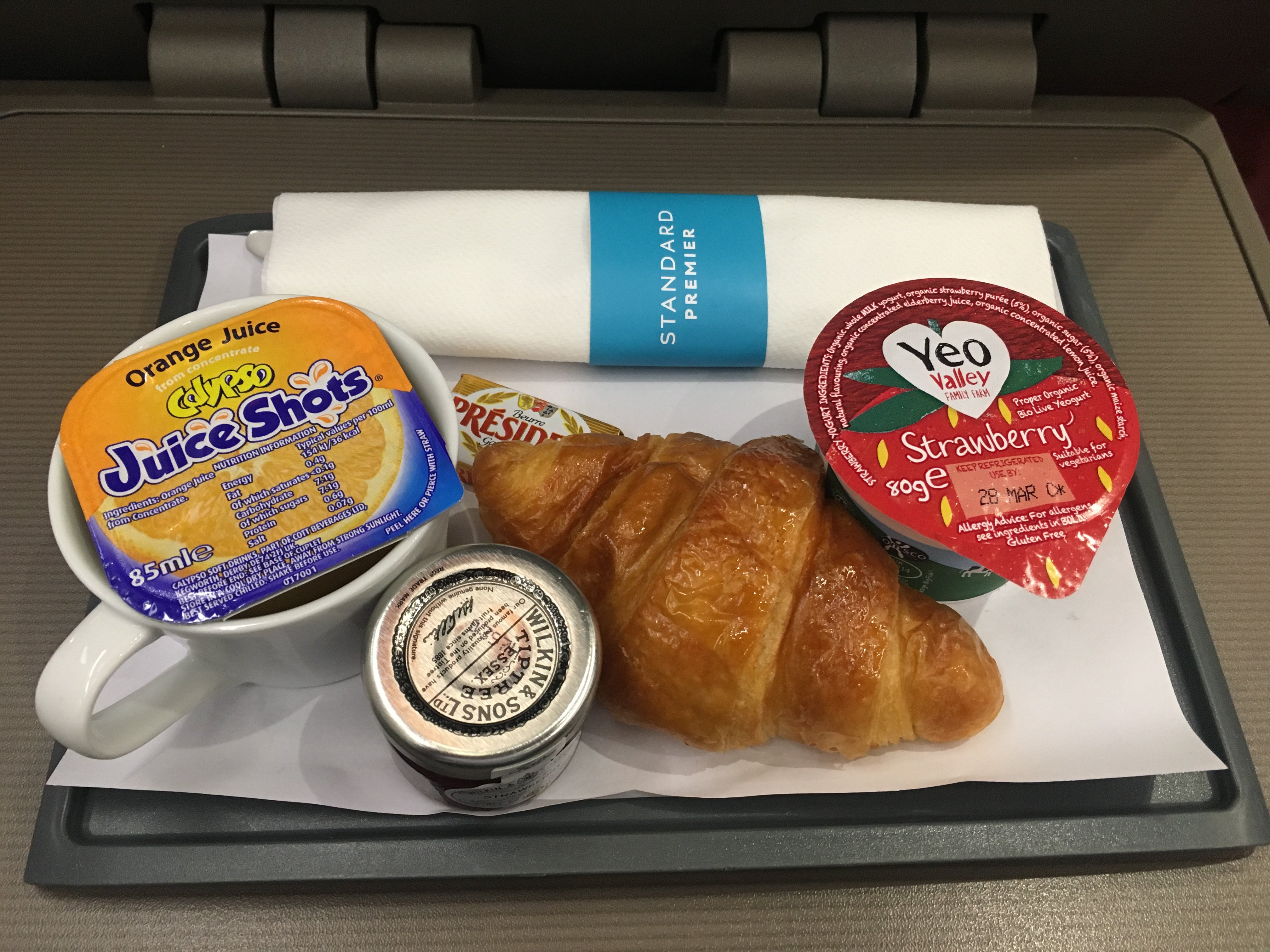 People’s favourite, Thierry, was back in action hours later, just as we entered the Channel Tunnel, serving a light breakfast with a sprinkling of humour. By the time we pulled into St Pancras just after 7am on a grey Sunday morning, sleep fatigue was beginning to bite. Memories of a great eight days skiing and an efficient, if not the most comfortable, journey however smoothed the pain.

The overnight Eurostar ski train was, for me, an adventurous off-piste route: it is fast, convenient and you can make it fun with a group of friends but it will make you work for your extra two days on the slopes. Given the adventurous mentality of most skiers and snowboarders out there, I rather suspect, “just because it’s there,” will be reason enough to give it a go.