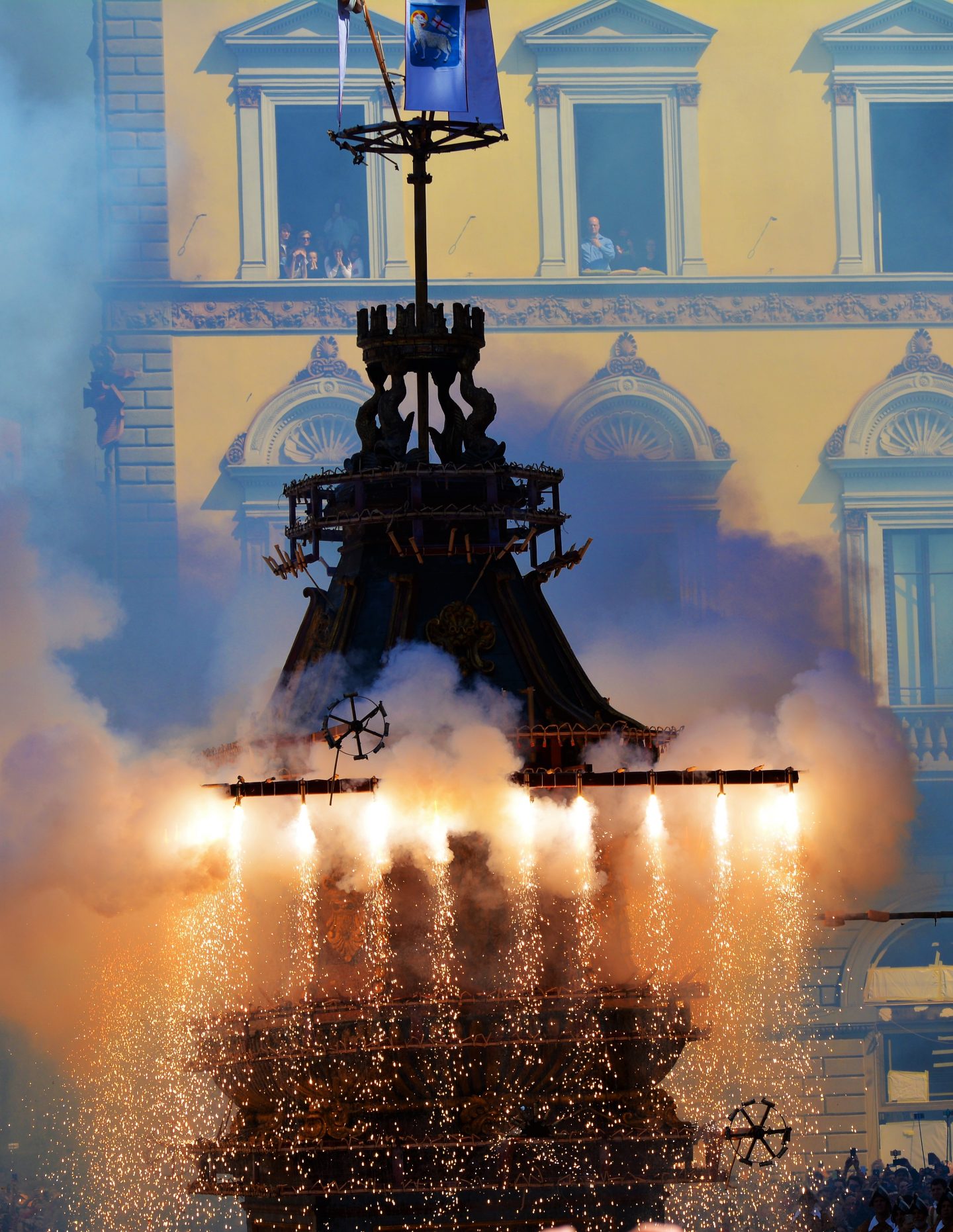 I will admit it, I was late to the party and the four white oxen had done the hard work. They had pulled a 10 metre high 15th century ‘cart’ through the city of Florence: from the Porta al Prato into the piazza in front of the city’s pride, the wonderfully ornate 13th century Duomo Santa Maria del Fiore.

The cart, known as the Brindellone, was accompanied on its journey by over 150 early rising locals dressed in 15th century costume.

The streets were full in every direction with thousands of on-lookers, already having been entertained by the arrival of the cart and the procession, including the Bandierai degli Uffizi’s famed flag throwing display. 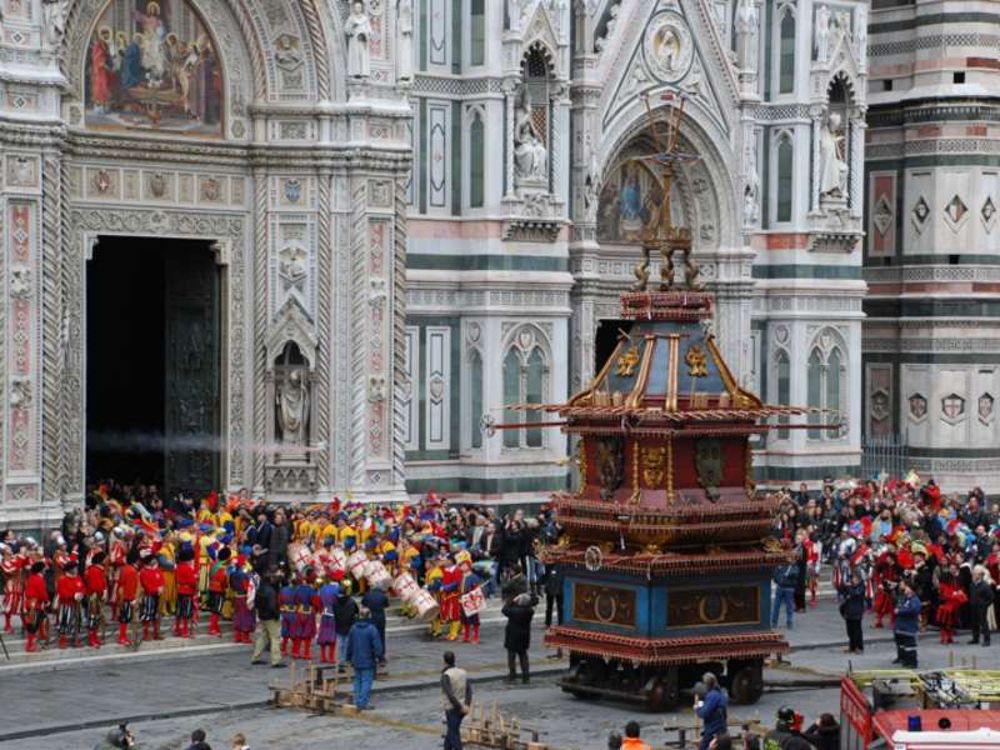 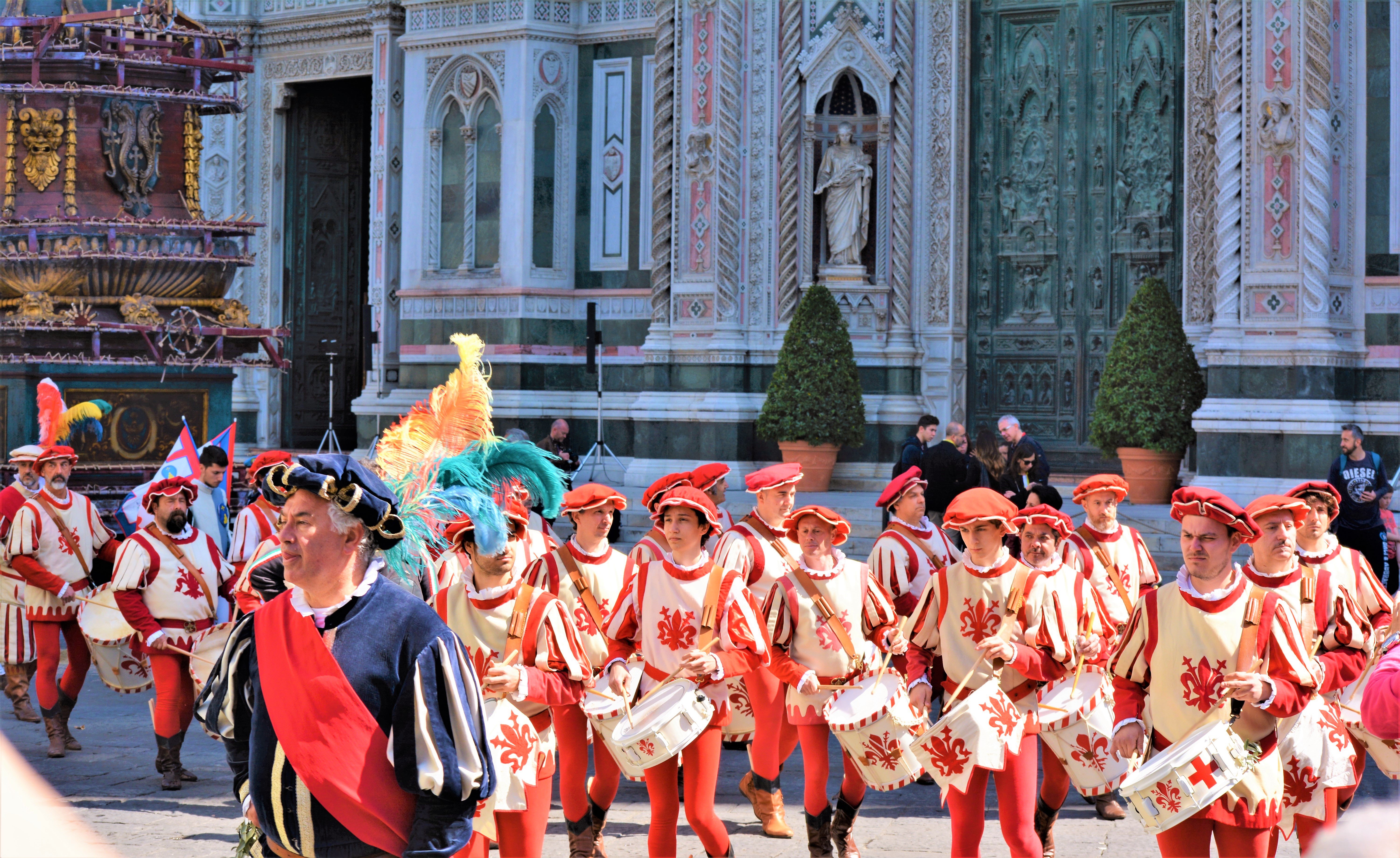 As I less than deftly weaved my way towards the front, for some semblance of a view, I rued the overly generous Italian hospitality I had enjoyed the night before. My head felt like the Duomo’s belfry had briefly been relocated inside my cranium.

I had, though, resurrected myself on a beautifully sunny Easter Sunday morning for a particular reason. We were all gathered to watch the incendiary tradition of Scoppio del Carro or, the Explosion of the Cart.

The origin and meaning of this explosive tradition date back to the time of the First Crusade. A Florentine man, Pazzino de’ Pazzi, is said to have been the first to scale the walls of Jerusalem. To mark his act of bravery, he was given three flints from the Church of the Holy Sepulchre, which he carried back to Tuscany.

Not that Signore de Pazzi was the first thought on the crowd’s minds, despite his family crest being emblazoned across the Brindellone cart, as we jostled en masse for a better view. As the bells struck 11am and as the congregation inside the Duomo belted out a spirited rendition of Gloria in excelsis Deo, the curious got more curious.

Initially, for centuries, the flints from the Church of the Holy Sepulchre were used to light a ‘holy fire’ from which flaming torches were lit and paraded around the city at Easter. Eventually, a large carriage was used to transport one big flame to the city centre. Then, at some point, it all started to get a little bit wild.

In today’s version, still dating back a good 500 years, a dove – the Colombina – leaves the alter of the Duomo with a fuse lit from the holy flints in its beak. It then flies down the aisle, out of the Duomo and into the cart. Behold, for the cart now explodes with fireworks for twenty minutes. So the folklore goes, the dove successfully striking the cart signifies a good year’s harvest ahead.

Of course, training a Kamikaze dove is a fool’s errand and the curious just gets more curious still. Instead, a metal dove is affixed to a wire all the way from the alter to the cart. To much cheering from the expectant crowd, the mechanical dove duly collided with the carriage before being promptly hauled back into the church on the same wire.

To the modern day salute of iPhones raised aloft to record said spectacular, the carriage fizzed, spluttered and spewed fireworks from all sides. At times beautiful and at times completely obscured by a thick pall of grey blue smoke of its own making, the display was probably something special a few hundred years ago. Today, a little less so, though the history, the tradition, the anticipation, the backdrop and the colourful parade all made it a memorable event not to be missed.

The luminescent crescendo was a genuinely captivating waterfall of golden sparks falling from the cart. Once over, the locals in their resplendent historic costumes, slowly processed away along the cordoned off streets with theatrical purpose. The watching crowds slowly realised the show was over for another year and were absorbed back into Florence’s antiquity.

As I wandered away, partially to find out whether the peal of bells I could still hear was inside or outside of my head, I wondered how the tradition of Scoppio del Carro had lasted so long.

Perhaps, much like the enduring warmth of the Italian hospitality that had been my undoing the night before, it is the simplest of traditions that last the longest.