Let us not kid anyone, when you are the national airline of Kazakhstan, it is always going to be a hard sell internationally. Whether you blame a certain comedian called Borat for making this vast nation the subject of international mirth over the last decade or not, I defy anyone to say they are rushing aboard an Air Astana flight.

I put it to you, however, that the passengers of Air Astana, awarded “Best Airline in Central Asia and India” by SKYTRAX for a sixth consecutive year, may have the last laugh. Boasting a fleet of 31 planes, the airline serves a relatively small range of carefully selected routes with London Heathrow among those in Europe. Pushing further East, the airline flies to key destinations such as Bangkok, Beijing, Hong Kong, Kuala Lumpur and Seoul. Might this be Europe’s most economical air bridge to the Orient?

The daily KC 942 flight from London Heathrow Terminal 4 departs at 18:05, with 6 hours 25 minutes in the air before landing at a sprightly 05:30 local time in Astana. One step aboard the Boeing 757-200 and it is clear that penurious Air Astana are not throwing away scarce capital on the interior design. The 20 year old planes have a new and functional fit-out, allowing airfares to be kept low.

The Economy seats have a standard 32 inch pitch and 18.1 inch width. Air Astana has used every possible row, including windowless rows; an anathema to most passengers and airlines. For reference, that was my row, row 14. 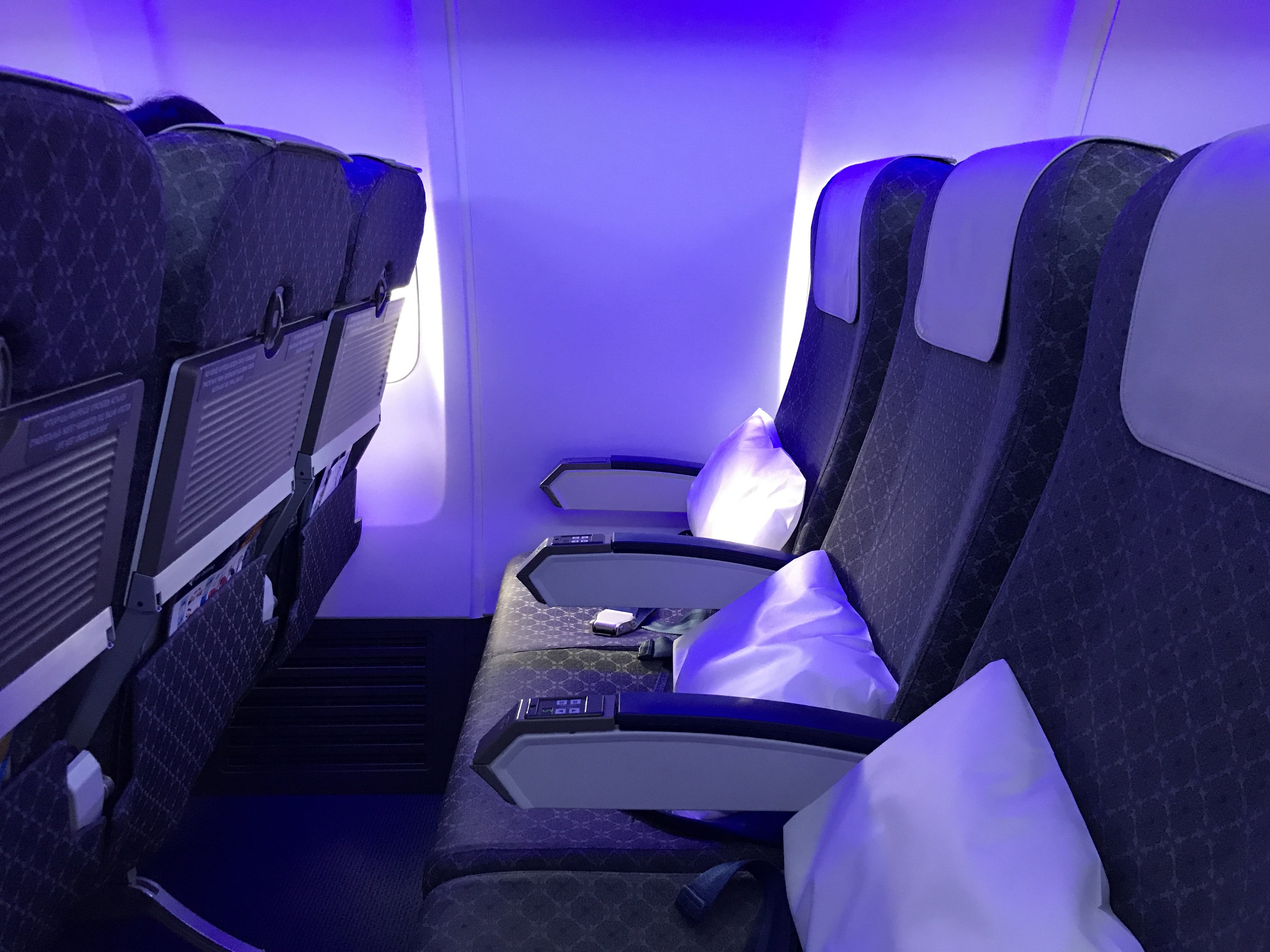 With cost control leading to cheaper tickets, a necessity in the vipers nest of snaring long haul passengers, Air Astana has no seat back TVs and no power points. There are overhead TVs every few rows but do not be fooled. Air Astana has, in fact, taken a bold leap into their version of the future.

On the premise that most travellers have their own wifi-enabled and media capable phone or tablet, the inflight AVOD is all wireless. One catch, you need to download their KCTV app pre-flight (annoyingly, you cannot download it once onboard) or else you can only access the inflight map and the odd programme on your device. It is also a closed wireless network: you are unable to access the internet, just the airline’s own app.

A nice touch in Economy is a little in-flight amenity kit, usually reserved for longer haul flights or those seated towards the front of the aircraft. The in-flight meal was indistinguishable from any other airline, with the option of chicken or beef. I struggle to even raise an opinion other than to factually confirm it existed. Perhaps, that is a compliment in some ways. When I asked for a beer however, I was notably served a large 400ml can, the size and brand of which is usually reserved for those with ruddy complexions on park benches and not on an in-flight drinks trolley.

Those in the small 16 seat business class cabin clearly enjoy a rather different inflight experience. Getting to sit there however, might not cost you as much as you might think. In the age of airline revenue maximisation, Air Astana has a neat touch that really appeals to me: bid for an upgrade.

On the Air Astana website, on the ‘MyUpgrade’ page, you can bid against your fellow passengers for an upgrade. With a starting bid of c. £200 per leg of the London – Astana flight, I went for £300 for the return journey, which I won. In fact, the cabin only had 4 passengers, which leads me to assume that no one else bid. They were all price conscious travellers perhaps, but Business Class travel is a treat costing hundreds if not a thousand more pounds on any other airline.

The VIP lounge at Astana airport, like the airport as a whole, is modern, new, even sleek perhaps. The pantry serves the usual array of pre-flight bites and drinks. Maybe it is not haute cuisine or the finest of wines but you can comfortably fill your well heeled boots in here. Do not get too carried away, as boarding is left up to you to watch the departure screens.

On-board, the 757-200’s fit-out of two by two seats favours extra space between rows, rather than over spending on the seats themselves. The 21 inch wide seats and recline to almost flat beds but feel like old school ‘lazy boy’ seats. Nothing too fancy here. The in-flight amenity kit is a little snazzier, including slippers, lip balm, hand cream, posher eye mask, etc., as well as a tablet set up for the inflight AVOD with some chunky headphones.

I was a given a warm and personal welcome by the cabin crew and enough hot hand towels were circulated for a veritable hospital bed bath. The meal served on the return flight was a five course, white linen table cloth affair with four choices of main course. I was beat by the time dessert came around but further choices, including a cheese board, were on offer.

The flight did not quite merit it in my eyes but the attendants offered to make up the seats into a full bed with a mattress and duvet. For those fast asleep before take-off, I noted they were able to eat when they awoke some hours later.

Before landing, a light chicken salad with warm rolls and more drinks was served. Upon landing at Heathrow, fed to bursting, we waddled through UK Immigration and bypassed the queues clutching our Air Astana fast track pass.

To book or not to book?

Dismiss the presumptive clichés about Kazakhstan’s national flag carrier. It may be small but it is perfectly formed. It will deliver the price conscious, and vaguely tech savvy, passenger comfortably into Asia. In doing so, it rightly elbows its way to the table with the bigger airlines.

The author flew at his own cost on the airline to Ürümqi, China, in July 2017. Upon arrival, he was the only passenger not to be reunited with his bag which took three further days before it arrived.