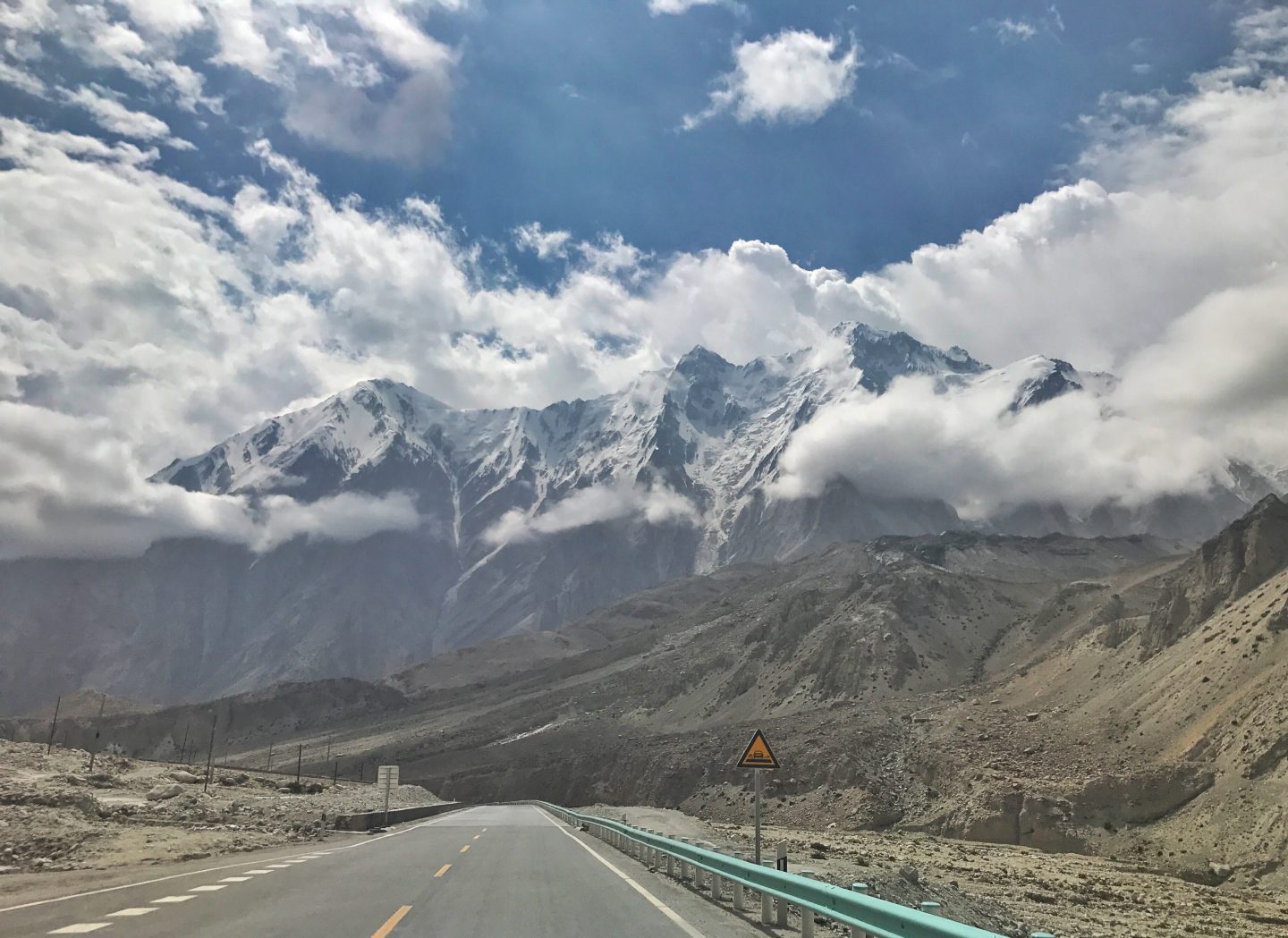 The idea of a ‘fly-drive’ holiday on one of the world’s highest paved roads might sound crazy. Following its climb through the epic snow-capped peaks of the Karakoram mountain range, flanking borders with Tajikistan, Afghanistan and Pakistan, crazier still. Treading in the footsteps of intrepid Silk Road caravans of millennia ago, and witnessing the same spectacular vistas, has never been easier, however.

I landed at Kashgar International Airport, having flown in only from nearby Ürümqi, also in the vast Xinjiang Uyghur Autonomous Region, in the far west of China. At this point, I was so far West that Tehran was closer than Beijing. My butch driver awaited me with an incongruously pretty hand drawn sign of my name, made by his daughters.

It was still early as we edged across town and out of the city, onto what is officially called the, “China – Pakistan Friendship Highway.” The tongue-twister market town of Wupa’erxiang, an hour or so outside of Kashgar, provided the last stop for fresh food. I stocked up on fruit, bottled water, local naan bread and other snacks as early rising farmers lay dozing atop trailers of crops from their fields parked along the road side. My driver opted for cans of counterfeit Red Bull, each packed with mind altering orange colouring, sugars, caffeine and taurine, and cigarettes.

Passing through various police checkpoints, some involving me alighting to show my passport and others just a nonchalant wave through, is a necessary pre-cursor to the Highway proper. A special permit is required for the journey, which should be easily arranged locally by your driver. 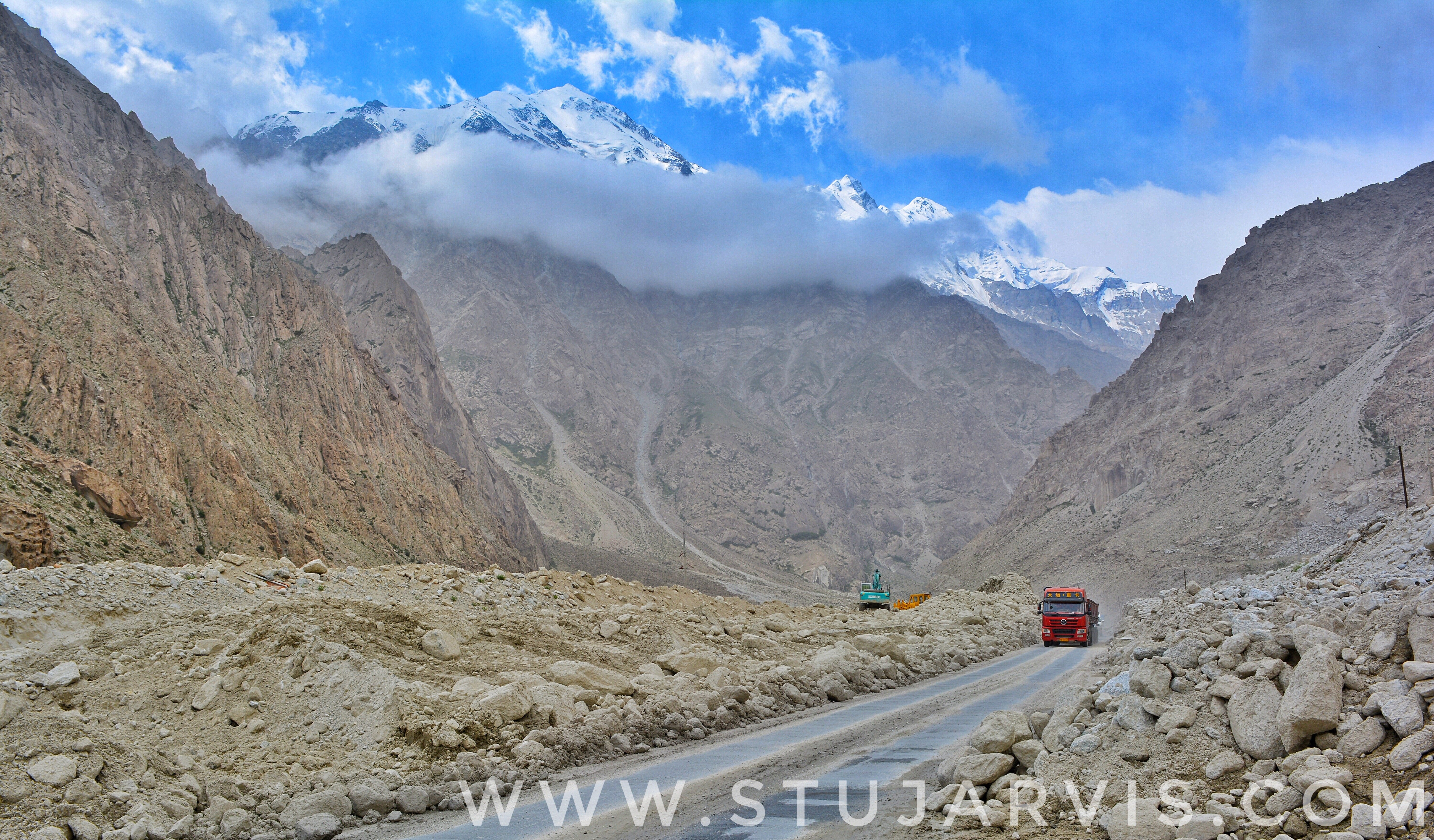 We met the Gaizi river, flanking its wide and rocky river bed, the last of the snow melt was rushing down its course. Recent heavy rains had caused one substantial landslide, which was in the process of being cleared. For the time being, drivers graciously allowed each other to take turns along the single track stretch.

Otherwise, being July, the road was in excellent condition and the day warm. The highway bustled with traffic but was never over-wrought with suicidal transcontinental lorries or private cars over-taking each other at pace. Instead, we sporadic vehicles ploughed our own independent course. 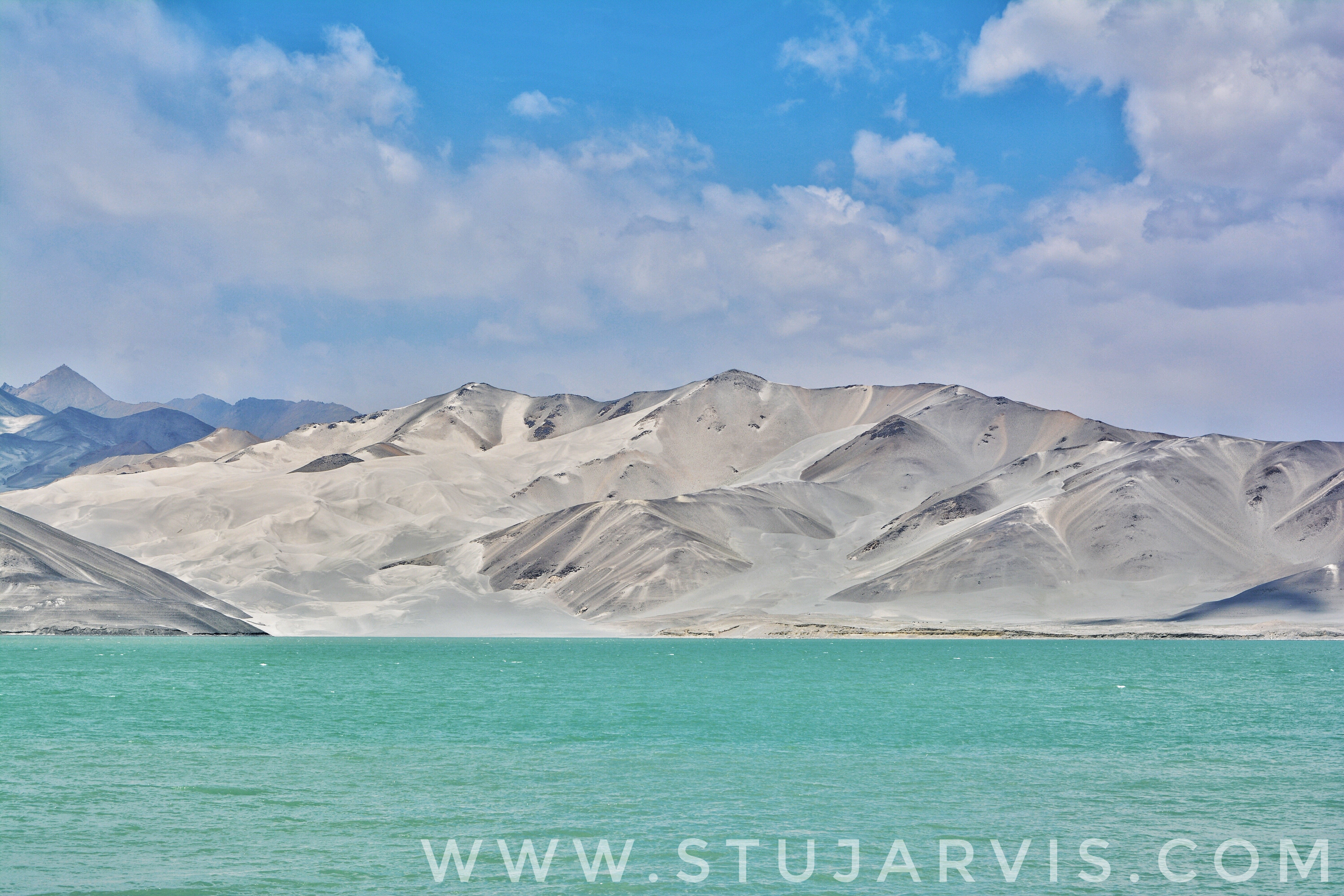 Our first stop was the stunning turquoise Lake Bulungkol, where mountainous sand dunes rolled down to its shores. A handful of yurts had been erected on the road side where you can buy bottles of water and tourist trinkets from the locals. An amorphous tourist group was oscillating at around twenty in number as cars and minibuses came and went. Beautiful though it was, it was not quite the moment of contemplative solitude that one might have wanted.

Not far after is Lake Karakol; the highlight for those on a day trip. Set a hundred metres off the highway, the banks of the lake are navigable and one can wander to find an area of reflective isolation. Standing over the lake is the great Muztagh Ata or, “Ice Mountain Father,” with its icy peak reaching a vertiginous 7,509 metres (24,636ft). 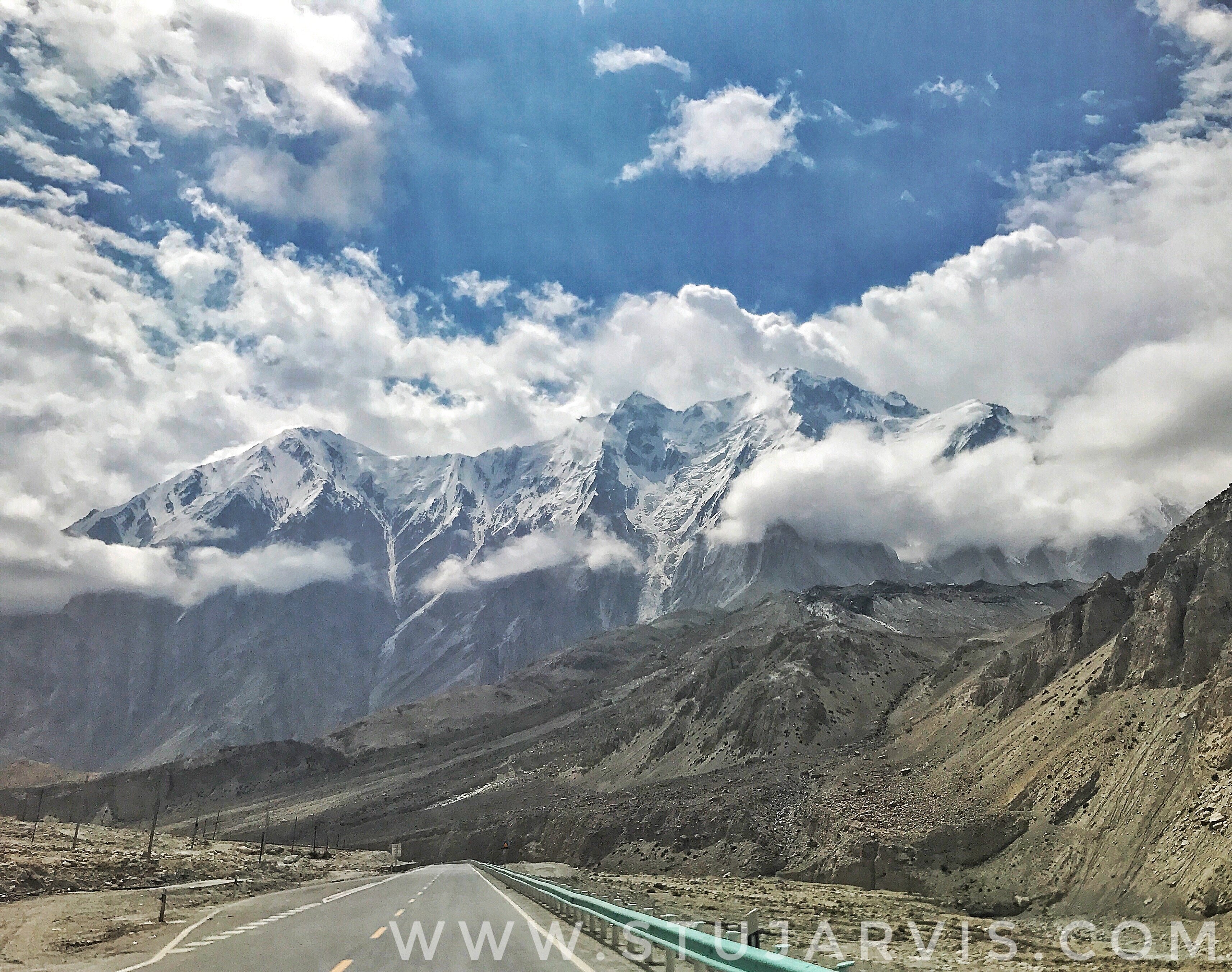 With a few steeper climbs, the Karakoram Highway was now reaching an altitude of 3,000 metres. Flanked by jagged peaks, the road raced across the grasslands of the valley plain. By early evening, a long four-lane boulevard decked out with Chinese flags ushered us into Tashkorgan, the last semblance of civilisation before the Khunjerab Pass border crossing with Pakistan.

The town was as soporific as any last post before border formalities commence. Given its strategic location, Tashkorgan has been a trading and military post, however remote it may be in the high plateaus, for over two thousand years. 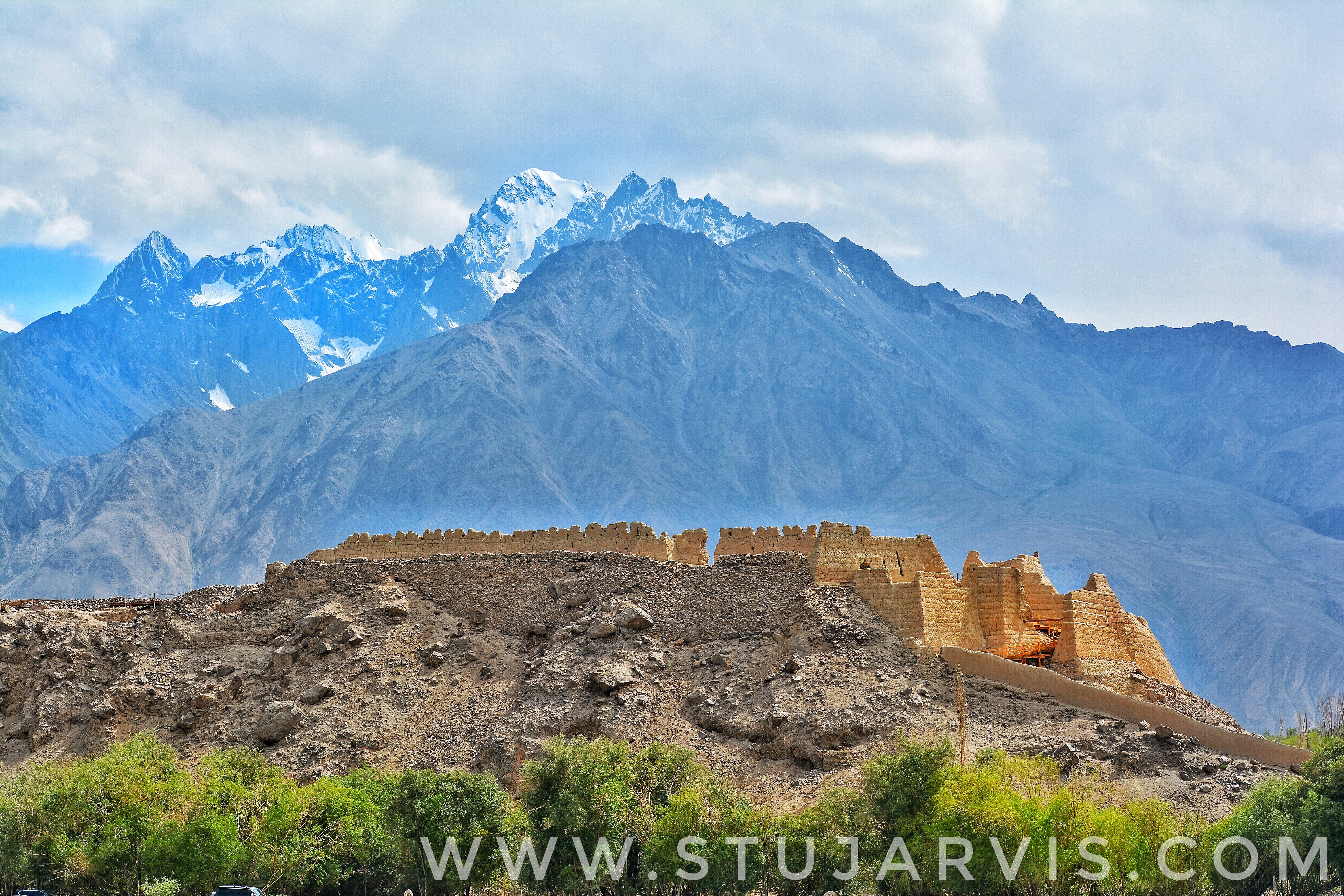 The highest promontory was reserved for the ruined Stone Fortress , which gives the town its name (Tash Korgan means Stone Tower). Now a quadrangle of beige hunks of earth and stone, it is discernible as the town’s defensive and administrative stronghold in antiquity.

Below, the valley plain was green with grasses mown by flocks of roaming sheep, goats and idle camels and pocked with white yurts stark against the green grasses and dark brown mountains beyond. A wooden walkway afforded some exploration of the sodden grassland. I attempted to venture further but quickly realised my folly, given how vast the pasture land turned out to be and quite how marshy the ground was.

Though the town offers limited accommodation, I slept in a commendably clean and serviceable room at the Crown Inn. I did feel drawn to continue onwards from here, to cross the Khunjerab Pass and embrace the Friendship Highway all the way into Pakistan. Not on this occasion, however, for I had a long journey East ahead of me. 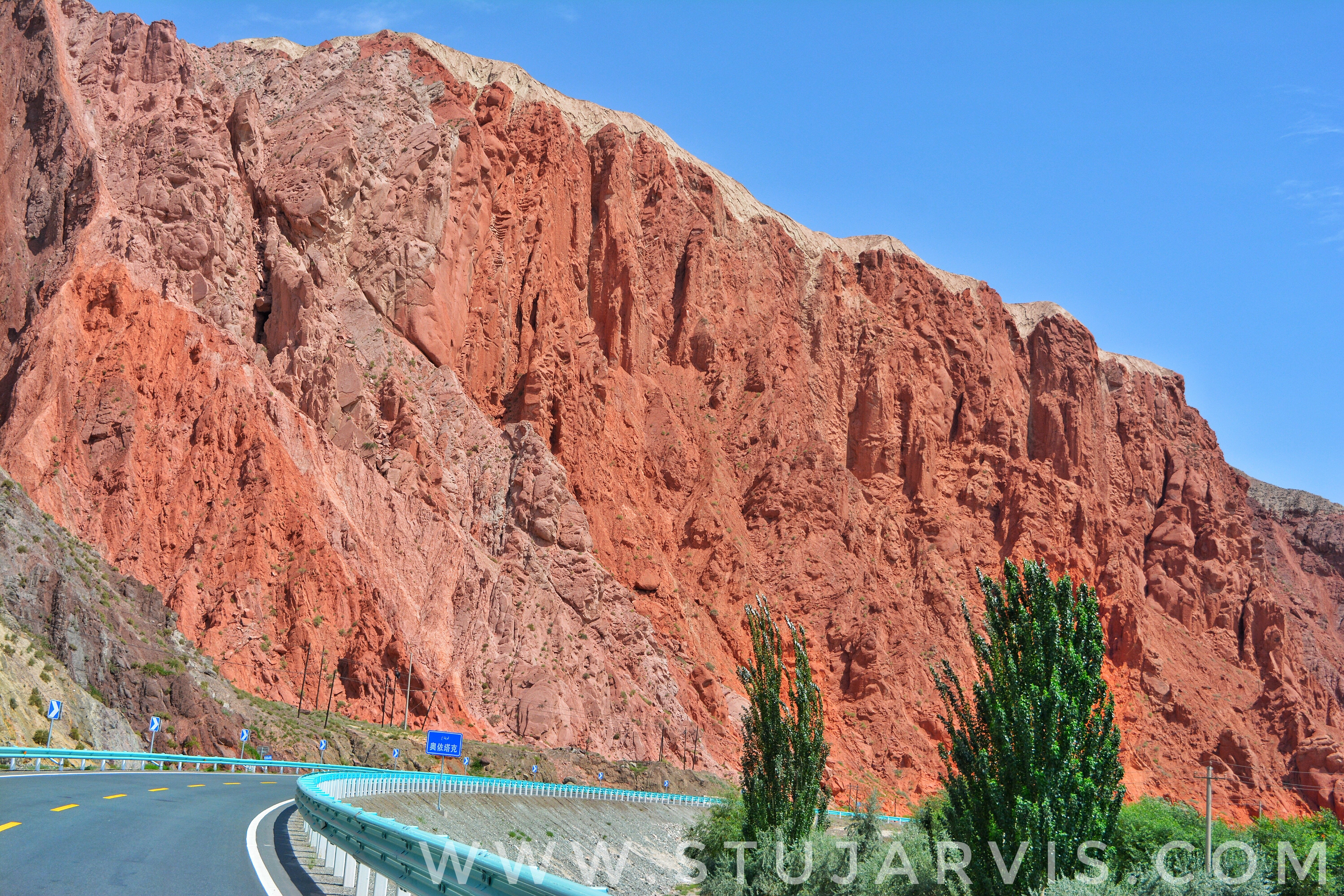 We retraced our 300km journey the following day, back into Kashgar. The day long vista of snowy peaks, jagged mountains and contracting high grassy plateaus were every bit as enthralling, as if I had never set eyes on them before, let alone the day before.

Humbled by the vastness of Karakoram, traveling the Highway is an experience that now sits deep within me. The Friendship Highway might be a twee diplomatic name but there is a common bond that binds those who have traversed it, reaching across not only cultures but epochs in the Silk Road’s long history.