“You did not pack a spade?” joked my guide, Shahid. “A travel trowel, perhaps?” he continued, clearly enjoying his own mirth. I had just learned that other affectionate names for Lahore are the ‘Garden City’ or the ‘Mughal Garden.’ I had clearly missed the green fingered memo but I was not about to miss Lahore’s ornate Mughal water gardens.

The most impressive of the numerous gardens dotted around Lahore are the Shalimar Gardens, now completely encompassed by the ever growing city. A product of the Mughal era, fusing Persian and medieval Islamic garden traditions, the gardens extend over three terraces descending north to south. Crenelated red sand stone walls enclose each garden of square lawns, bisected by waterways lined with fountains. Cypress trees and pavilions offer shade under which the gardens could be admired. 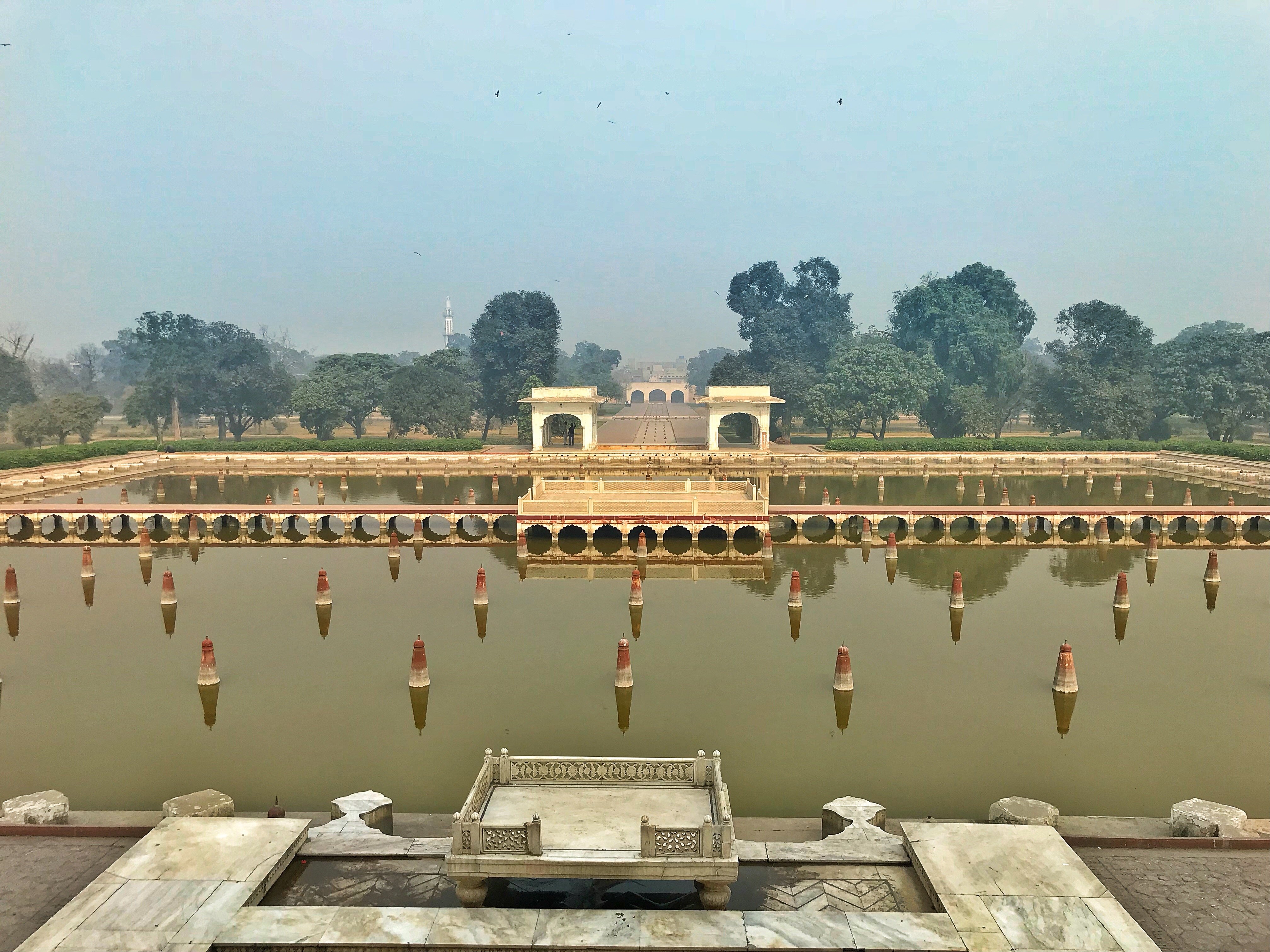 Alas, an outbreak of Dengue fever a few years ago required the majority of the garden’s waterways to be drained and the fountains shut off. The caretakers do their best to maintain and, to a lesser extent, restore the gardens, walls and buildings but funding is short in supply.

The draw for Lahoris is self-evident, with couples discreetly courting, taking a moment in each other’s company chatting beneath a shading tree. Young families walk the gardens, taking in the space to run around not often afforded in the tightly built-up city. Elder visitors take a slower stroll, admiring the gardens and the other guests, to remind themselves of more youthful visits.

Set on the banks of the Ravi river, the Tomb of Jahangir dates back to 1627 and is another surviving example of grand Mughal gardens. Divided into four squares by two bisecting channels of water, the gardens sit within a huge quadrangle, with each side almost 500 metres in length. The tomb itself is housed in a vaulted mausoleum, decorated with fine inlays of flowers and the ninety-nine names for the Prophet Muhammed upon the tomb, with frescoes brightening the ceiling and walls. 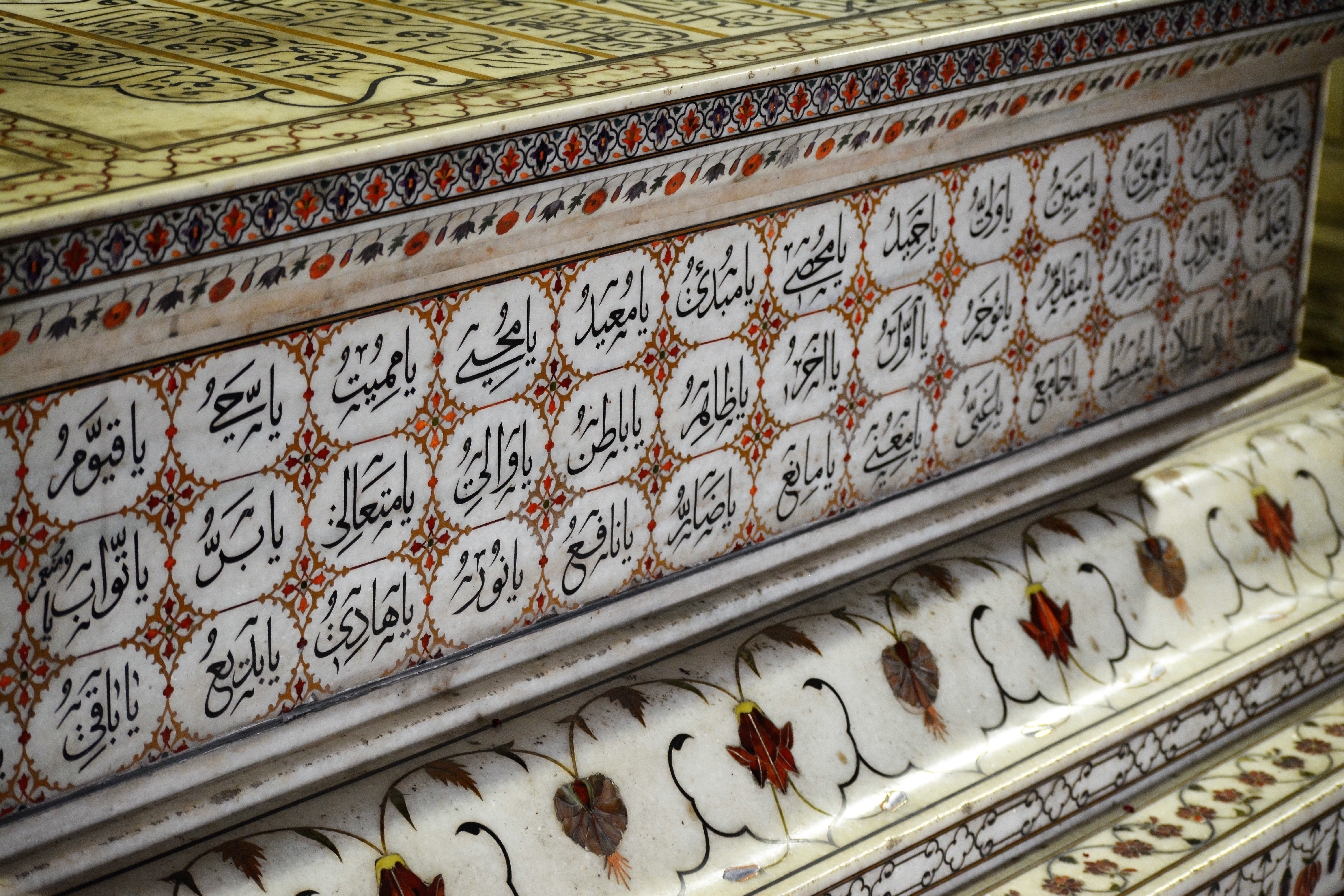 By the time of of our visit, few other people were there but for the caretakers raking up stray leaves and a handful of large birds of prey swooping in the warm air. Piecemeal restoration work was evident here too, though with far more modern equipment.

The name translates to ‘Deer Minaret’ whereas Sheikhupura is better known as a favoured hunting ground of the Mughal Emporer Jahangir. The story behind Hiran Minar, if true, shows Jahangir as a softer, sentimental man than history normally portrays him.

The Sheikhupra hunting grounds were but bushland in their day. A large rectangle man-made lake with high vertical edges was built with four narrower slopes, one on each side, which allowed animals to descend to drink the lake water. In the middle of the lake, however, sits an octagonal pavilion which shaded and hid the lazy hunters. From here, they would launch their volley of arrows upon the wild animals drinking at the lake’s edge. 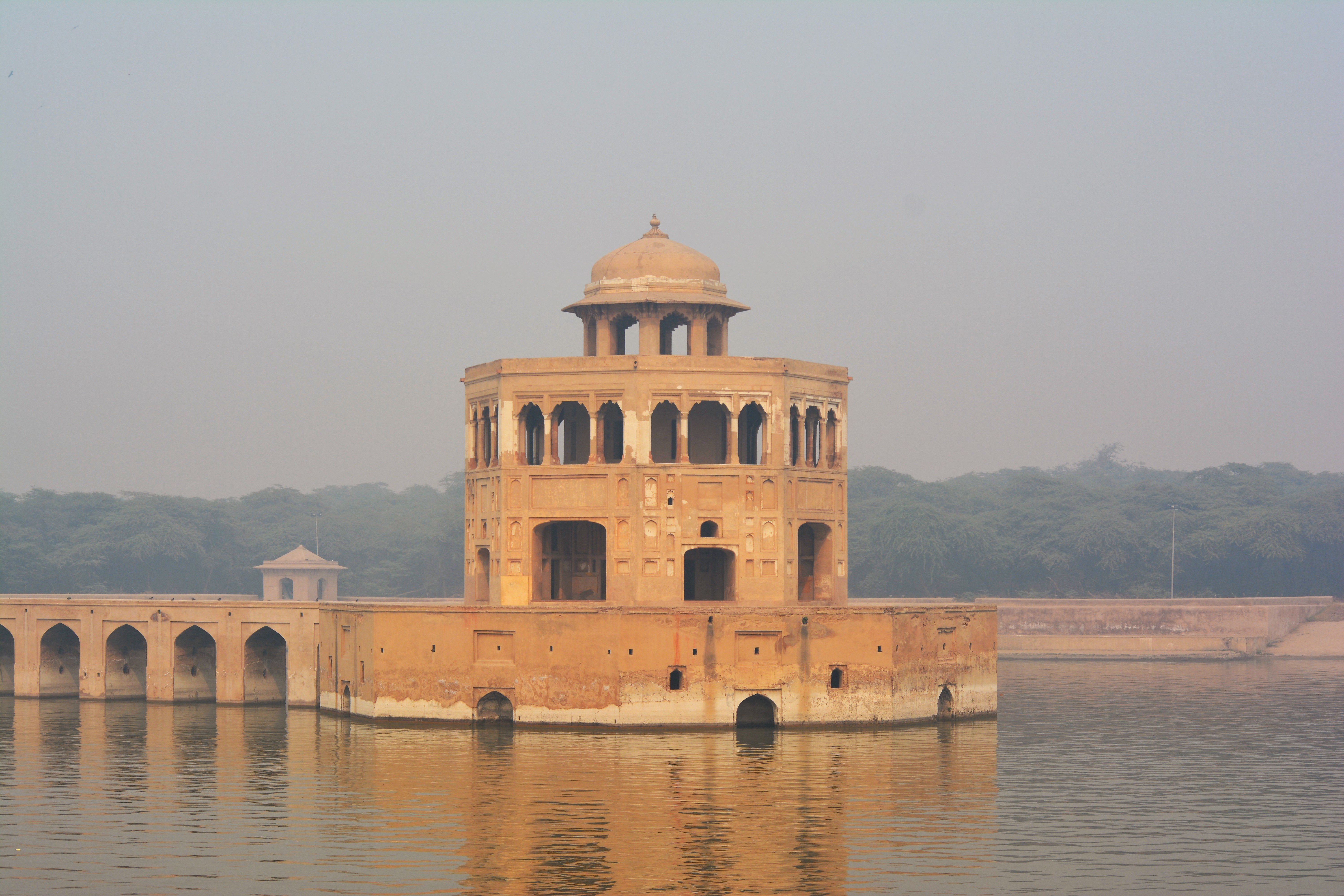 Legend has it that Jahangir had a favourite antelope whom he called Minraj, looked out for on every visit and never targeted. One day, it was accidentally struck by a stray arrow. In honour of Minraj, he built a 30 metre high minaret by the side of the lake and inscribed it with a poem dedicated to the animal. Minraj was buried at the minaret’s base.

Upon my visit, I was treated to tea with the manager of the complex in the very new and air conditioned offices adjacent to the park. He was rightly proud of the park, though with a particularly dusty day underway, I was in little mood to linger outside. As I left, and as I had come to expect, a number of young school parties were descending on the park with picnics in hand and clearly possessed a far stronger constitution against dust storms than I.

Returning to the city, I wanted to see daily Lahori life at its most colourful and there is no better pace than the fruit and vegetable market. Brightly and delicately painted lorries travel from all across Pakistan to trade their fresh produce here.

I watched the auction of crates of apples. A tight circle of men peered in to see a sample crate crow-barred open, and plucked from the straw in which they were packed, a couple of apples were passed around for inspection. The auctioneer, from his prime spot, surveyed the crowd and chided them into life, extracting a sale in short order, only for the process to be instantly repeated.

Elsewhere, stalls of fresh bright vegetables were neatly on display by relaxed stall holders sitting cross legged. Some supplies did not even make it off the back of the lorries, such was the demand for their produce. Men carried large bunches of bananas on their heads, as others struggled carrying wooden crates on their backs. 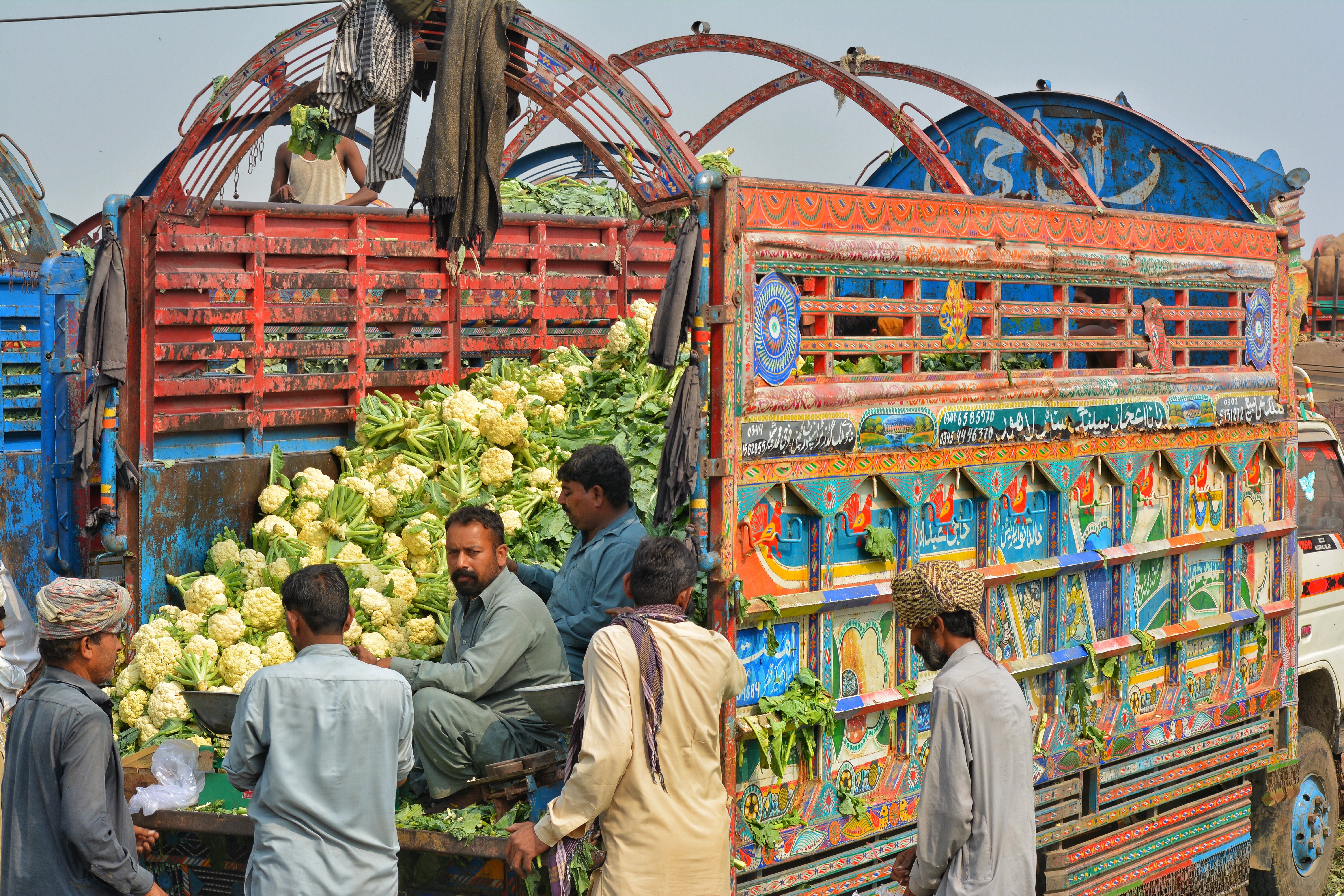 The bright intricately painted lorries queued up nose to tail, ready to unload their produce. The area of market stalls seemed to go on forever, with commercial wholesalers slowly morphing around the next corner into smaller domestic sellers of lesser quantities. In the lively and welcoming atmosphere, the market was, unexpectedly, a colourful highlight to my trip.

Whilst packing a travel trowel might rightly be the last thing on your mind when travelling to Lahore, do expect and do seek out some of the finest Mughal gardens and fresh, fascinating fruit and vegetable markets that the fertile lands of Pakistan has to offer.

The author travelled at his own cost, on a trip arranged by Shahid Yousaf (www.pakistantours.pk, travelpakistan66@gmail.com), whom he can highly recommend.