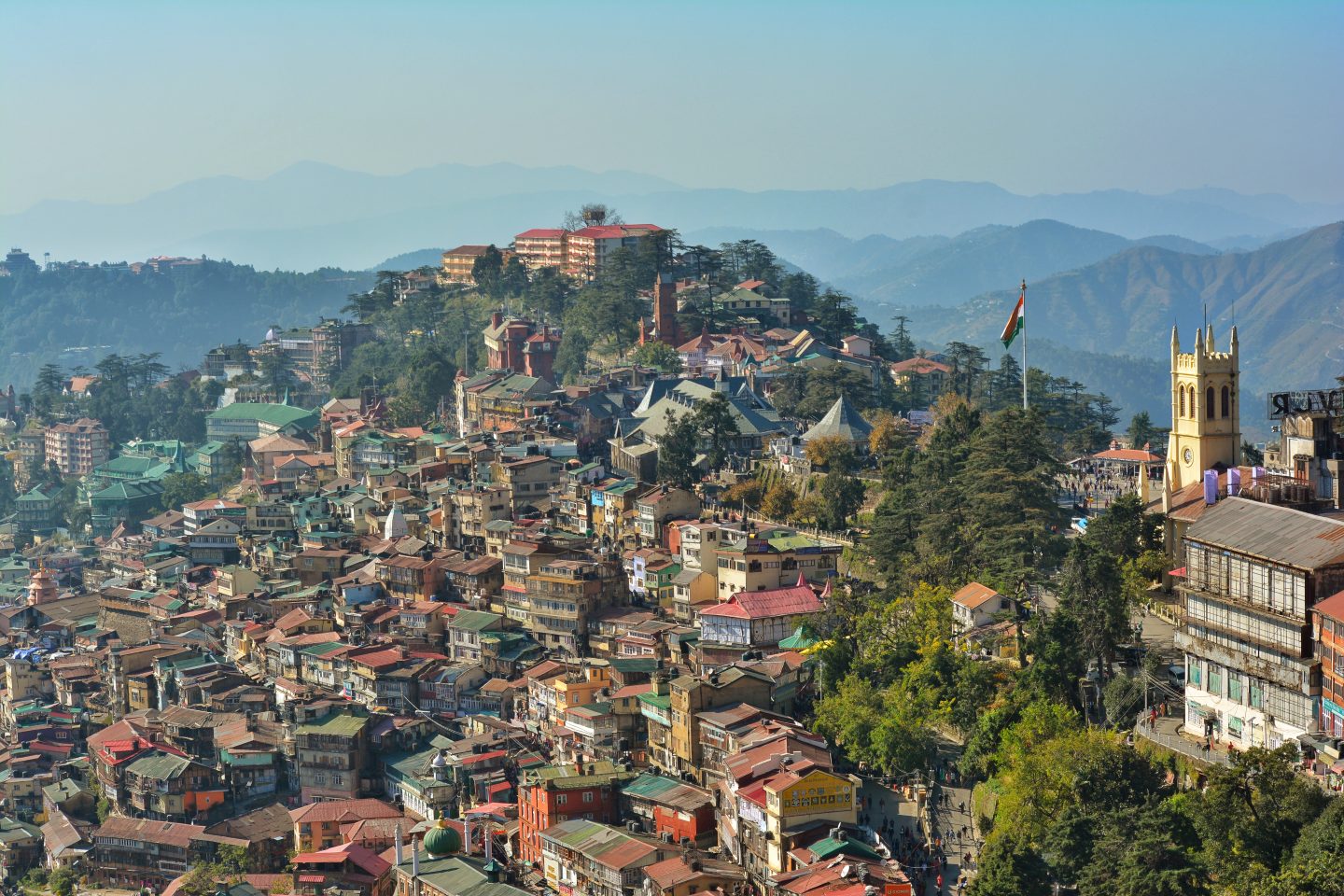 The flames crackled and danced rejuvenated, as another log was placed onto the fire. From India’s hot and dusty plains, we had climbed over 7,000 feet up to the soothing chilled air of Shimla and were in need of evening warmth.

Our surrounds were magnificent, in the Cavalry Bar at the Oberoi’s exquisite Wildflower Hall. Teak panelling, heavy rugs and regal furniture gave a formal appearance, yet the easy calm of the attentive service and panoramic hilltop views from this five star retreat provided mellow environs in which to unwind. 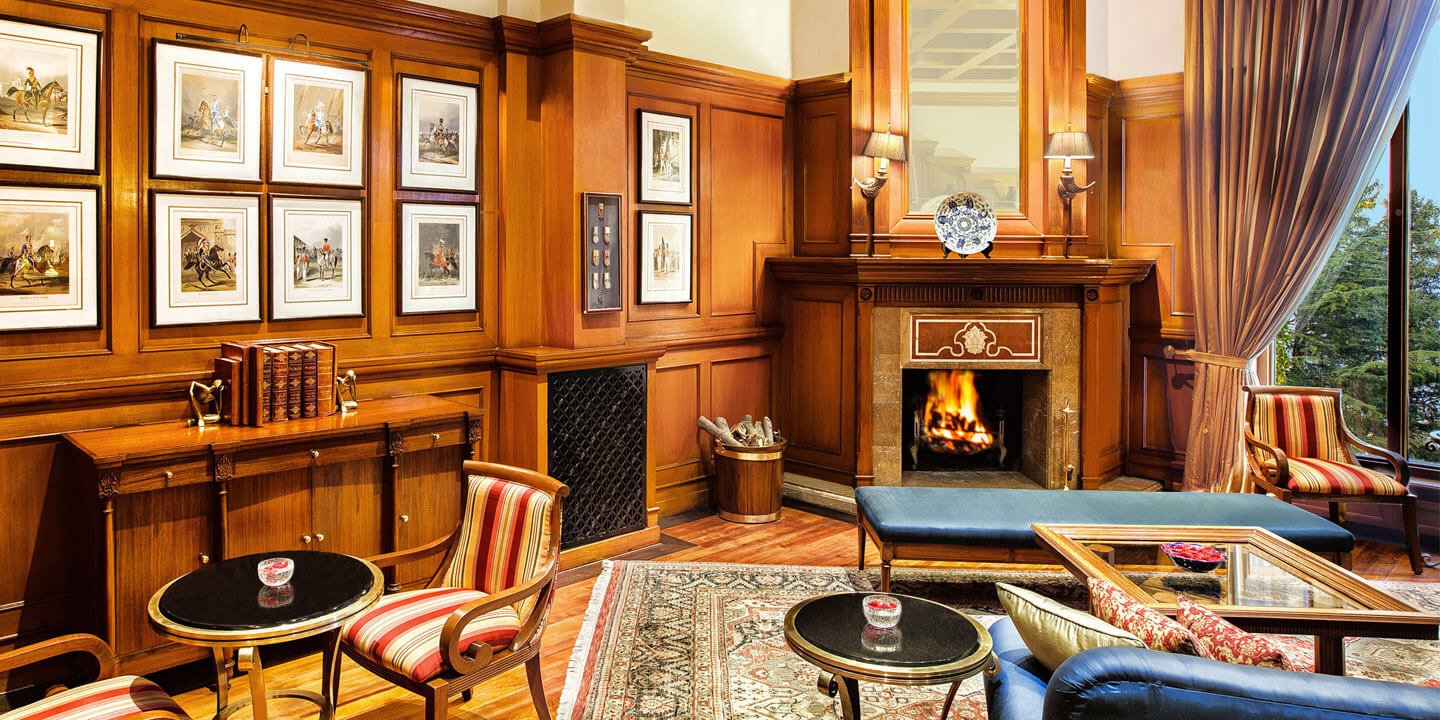 Wildflower Hall is situated just outside Shimla, Summer home to the British Raj since the early 1800’s. The amenable Summer temperatures and clean air were first spotted by adventurous British officers in search of an escape from Dehli’s heat. By the middle and latter parts of the century, the British ruling classes were de-camping en masse from Delhi every Summer. This came to include the Governor General of India himself who relocated his entire office here for the Summer months. 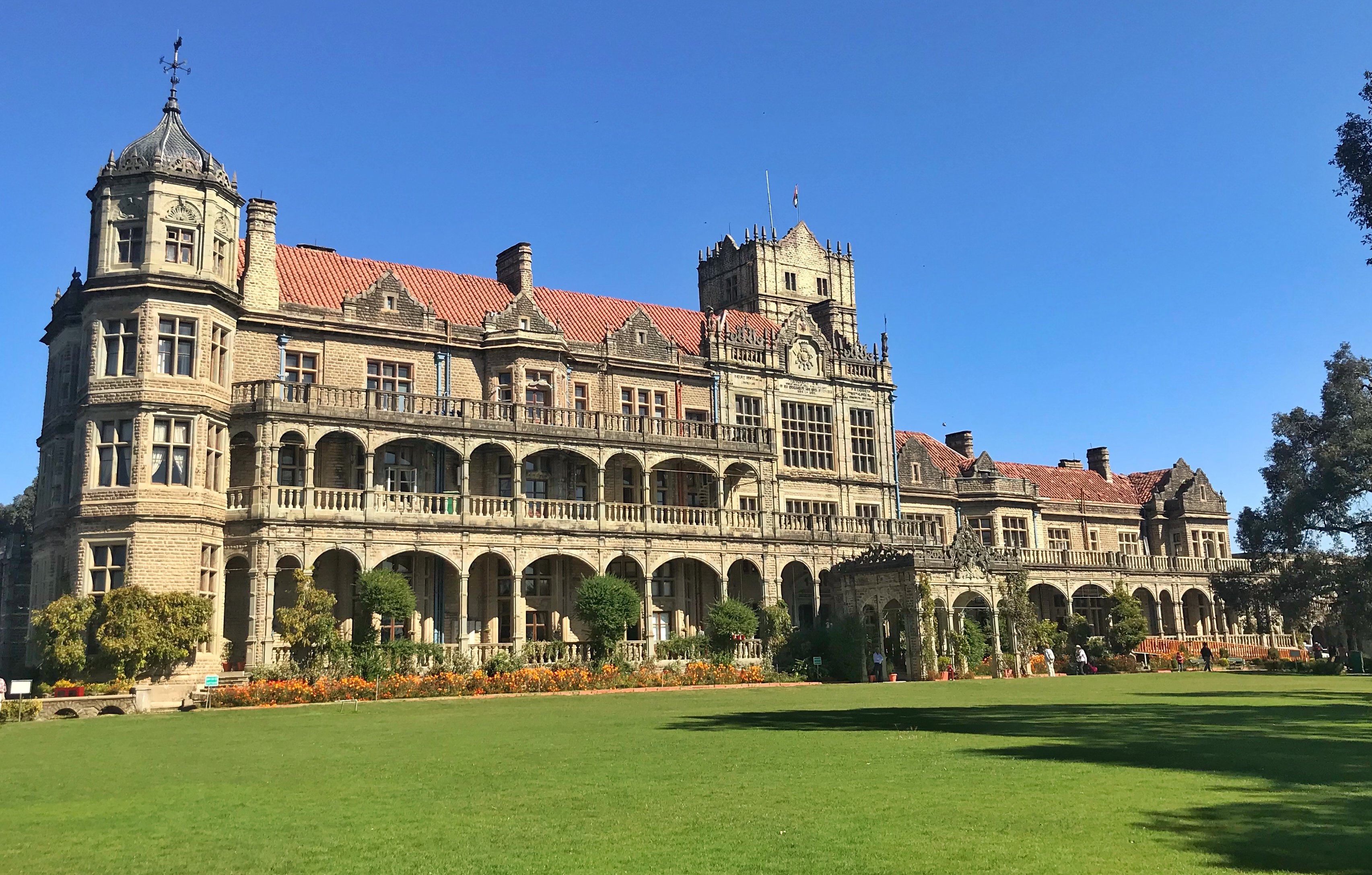 The impressive ‘Jacobethan’ style Viceregal Lodge was built in the 1880s and sits still intact today at Observatory Hill. Reminiscent of an imposing Scottish Laird’s manor, surrounded by well-tended lawns and gardens, successive Indian Viceroys governed all of India from here each Summer until 1946. Today, it can be visited on a fascinating, if brief, tour. Only a few rooms are restored and open to the public, as the property is now fully occupied by the Indian Institute of Advanced Studies.

Shimla grew from a village to a bustling town atop a narrow ridge-way. Along the apex runs a wide pedestrian-only street, the Mall Road. Along here, all the necessities of life were catered for, from shops to chemists, the post office to banks, and a grand town hall.

The town hall itself contained further essentials for colonial life: a theatre, a library, a ball room, a hall for public meetings, two reading rooms, two retiring rooms, a drawing room, a bar and a card room. In its hey day, Shimla hosted a dense concentration of the upper echelons of the British Raj indulging in parties, balls and amorous frivolity. It is said that Wildflower Hall was built out of town to avoid the rampant escapades and gossiping of Shimla life.

The Mall Road remains to this day, with many of the original buildings still in use. The hilltop stretch affords the best views and provides the main promenade for visitors to cast their imaginations back to the days of the Raj. Alas, for some of the colonial buildings, more imagination is required than for others. Some are now but mere shells inhabited by itinerant monkies.

Visitors keen to catch a glimpse of the vestiges of the British hill station come thick and fast, often travelling up from Kalka on the narrow gauge ‘toy train’ as it is affectionately known. Though UNESCO World Heritage listed, this is an Indian Railways maintained service which can be pretty grubby on the inside and suffer from dirty windows which can obscure the views outside. We arrived at Kalka station in the dead of night for the early morning service to Shimla, which we found was already delayed by three hours and elected to drive up instead.

By the time we arrived into Shimla, dawn was breaking and the tarmac highway had become the tightly packed two lane Cart Road. Another vintage of the British Raj, the road offered wonderful views over the ever-green forested hills and valleys of the Outer Himalayas. By the time the sun was high in the sky, the narrow road was sadly back to its usual rolling traffic jam replete with honking car horns. Fortunately, the majority of sights are on, or just off, a promenade along the Mall Road. 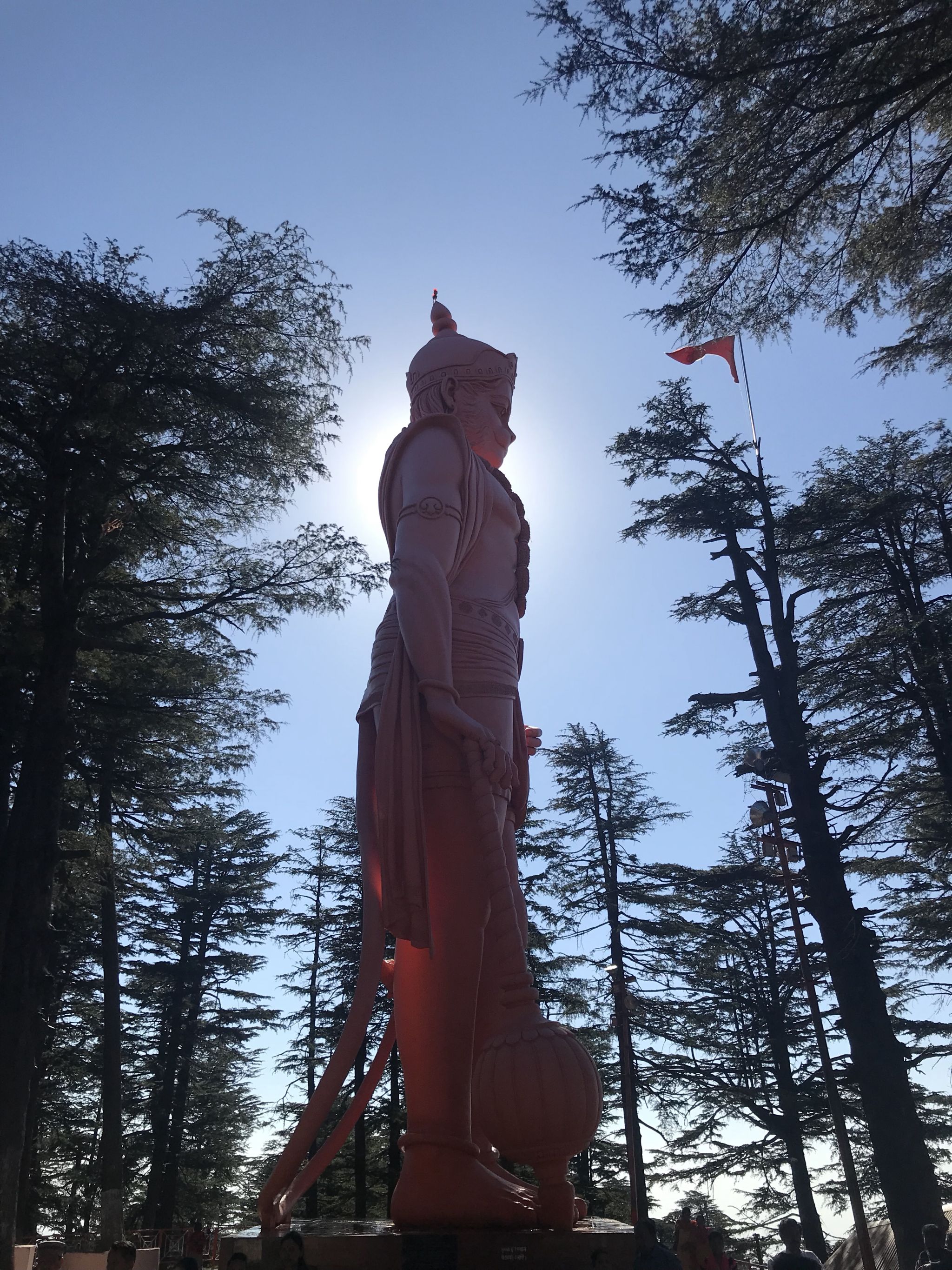 Overlooking the Mall Road from Shimla’s highest peak, is the 100 feet tall statue of Hindu god, Lord Hanuman. The Jakhu Temple situated on the peak had existed long before the British came to town and remains a lung challenging walk up for the finest view down over the Mall Road and the tumbling hillsides of Shimla below.

Beware the mischievous monkeys at the top, who will sniff out food and any loose items, which might be an attractive play thing for them. We elected to take a driver up to the top, along with our guide, and enjoyed the views from the new cable car on the way down.

A prominent landmark at the eastern end of the Mall Road, not far from where we alighted from the cable car, is the pleasant Christ Church. Its neo-gothic style and stained-glass windows looks every bit the transplant from an English provincial town and imbues Shimla with yet more of a British colonial feel.

Back by the fireside at the sumptuous Wildflower Hall, we finished our post prandial drinks. The dancing flames had died down, though the fire was no less enchanting. For Shimla too, its most vibrant days may have long since passed but often it is in the embers that one finds the warmest glow.

The author travelled at his own cost, on a trip arranged through Magic Tours of India, whom he can happily recommend.