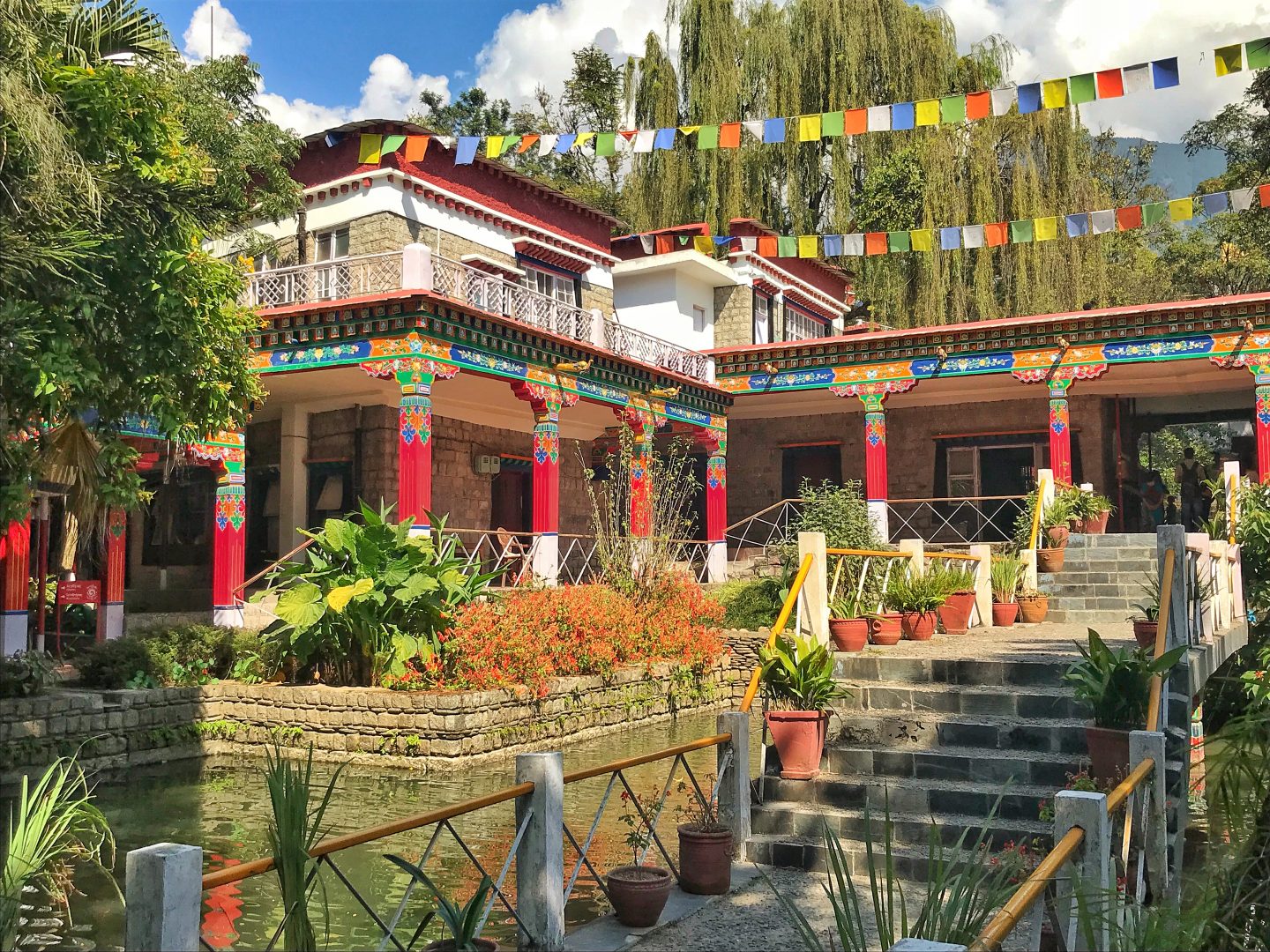 My grandfather wrote of Dharamsala in 1943, “From the point of view of climate and situation, Dharamsala seems too good to be true. The cantonment is about six thousand feet above sea level, in the foot hills of the Himalayas. We look down and away across the plains in one direction, while in the other, behind us, lie the mighty snow-capped peaks of the Dhauladhar mountains.” 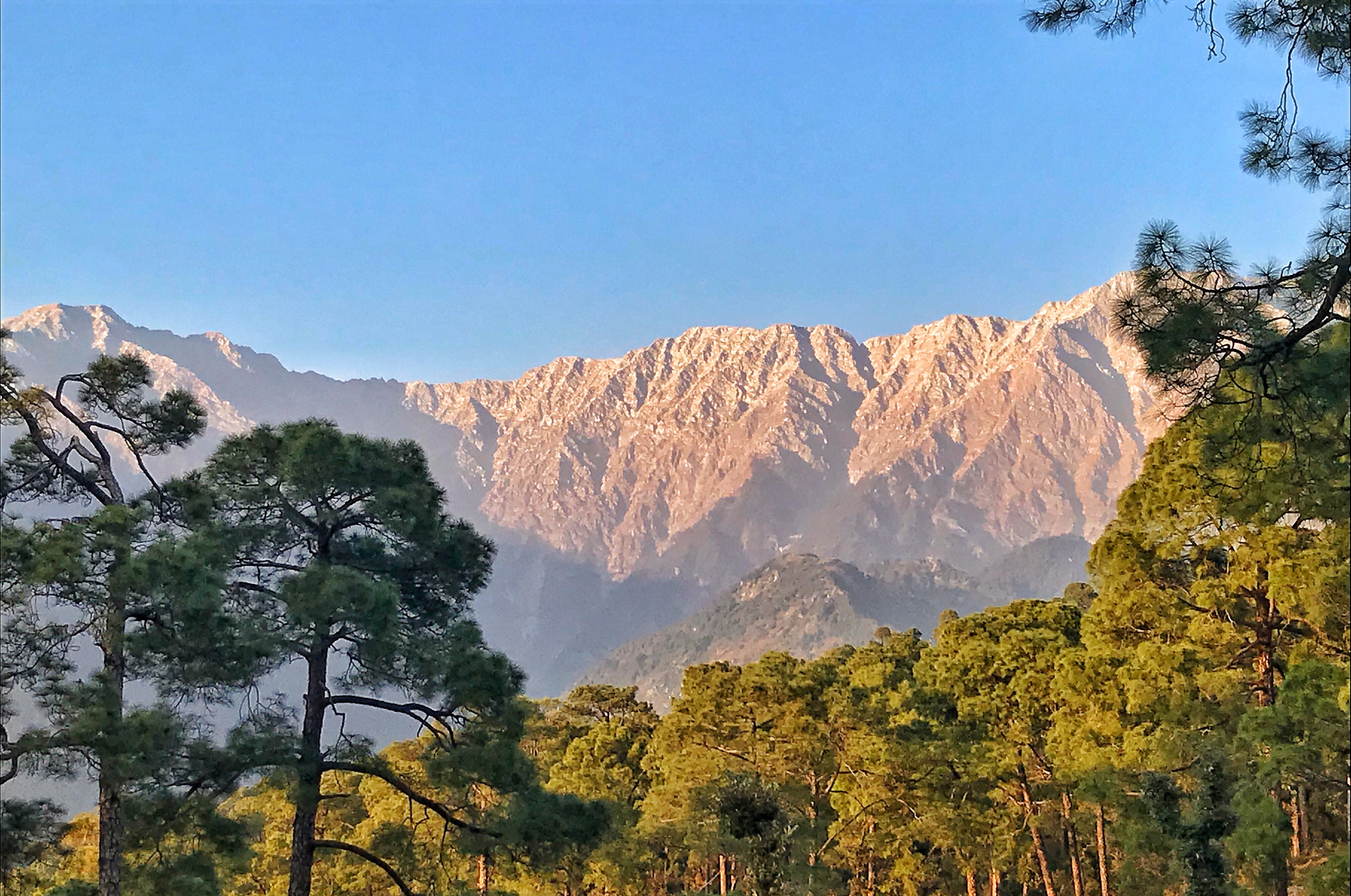 His surviving letters to a great aunt in Kilmarnock, Scotland, were clue and motivation enough for me to persuade my mother to come with me, to try to find where her father’s military camp, the then 1st Battalion, the King George V’s Own Gurkha Rifles, had been.

Having experienced the embers of Raj life in Shimla, it was a two day drive to reach Dharamsala. Our overnight stay in Mandi was of little note. The town has limited accommodation options and is best known for being the staging post for adventures further north, east and west. Nonetheless, from the tiny backstreets to the noisy main streets, the town was abuzz with all the colour, sparkle and sound of fire-crackers signalling impending Diwali celebrations.

Our journey progressed, climbing higher with every switch-back hair-pin bend, as the air became cooler and thinner. By the time dusk had set in, we were driving by small villages tucked off the road, in the evergreen pine forests and latterly through a garrison enclave. Dharamsala has long been a strategic military base and likely ever more so since Partition. The crossed khukri daggers, the emblem of the much respected Gurkhas, was plain to see and pepped up our spirits after a long two day’s drive.

By night fall, we had reached our hotel, the pleasant Fortune Park Moksha, for deserved rest. Sunrise brought breakfast overlooking a staircase of steeply descending small fields, etched into the hillside. Ladies in bright saris picked their way down for a day’s labour. 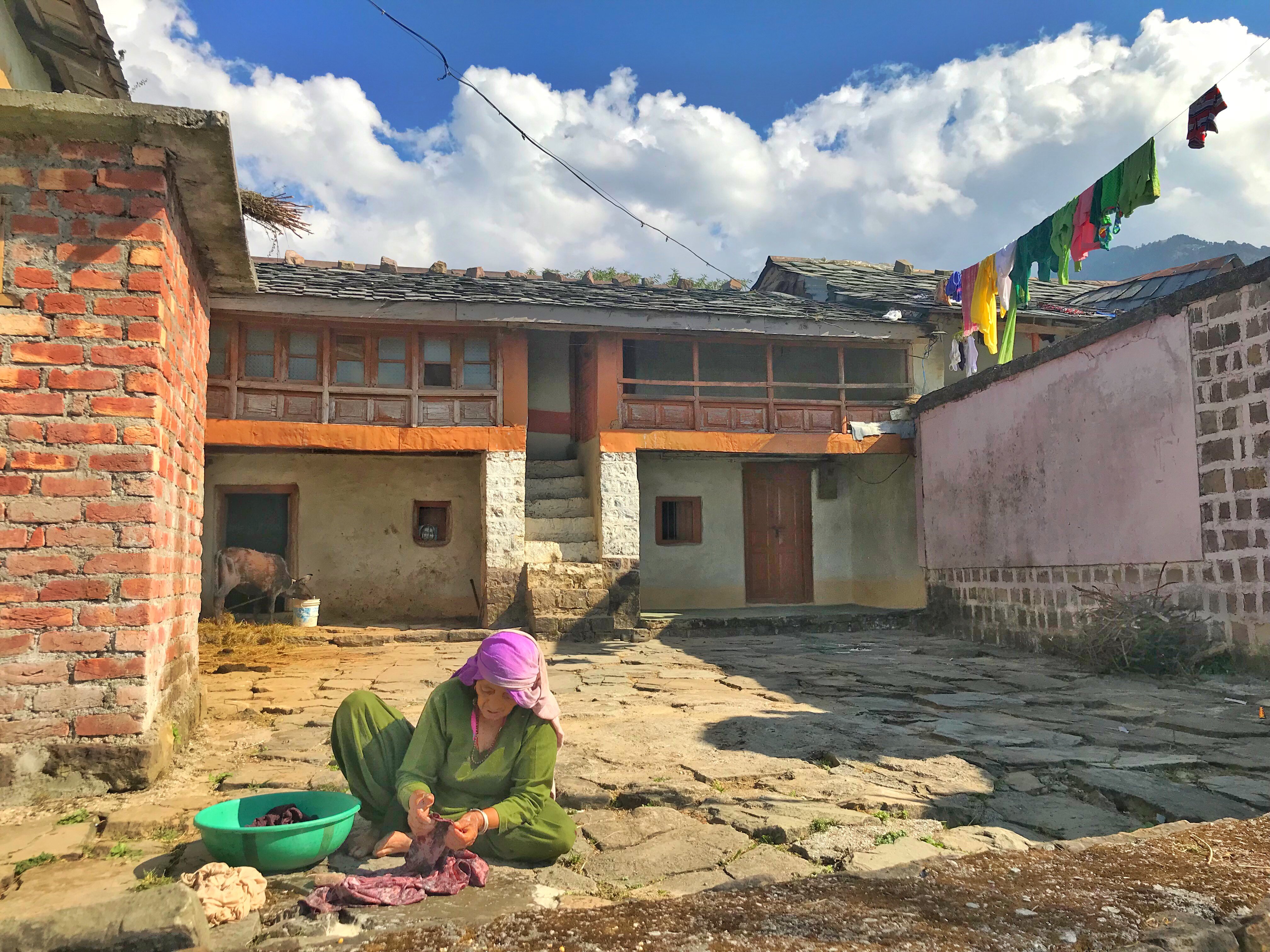 Our first visit of the day was a walk through a small village nearby, recommended by our guide, a few twists and turns further up the never ending hillside. Here, our guide explained, were some of the surviving examples of local rural architecture. Low, two floor homes, with a few animals housed in ground floor accommodation and their heat helping to warm the family quarters above.

The first floor tended to have a rickety balcony running the length of the house, perhaps to shelter when the inevitable rains came. It was September though and the sky was clear, with a warming sun. Out front, a courtyard paved with large flat stones and provided space for the animals and domestic chores by day. No sign of the men folk but ladies of all generations pottered, chatted and worked to a near silent backdrop. 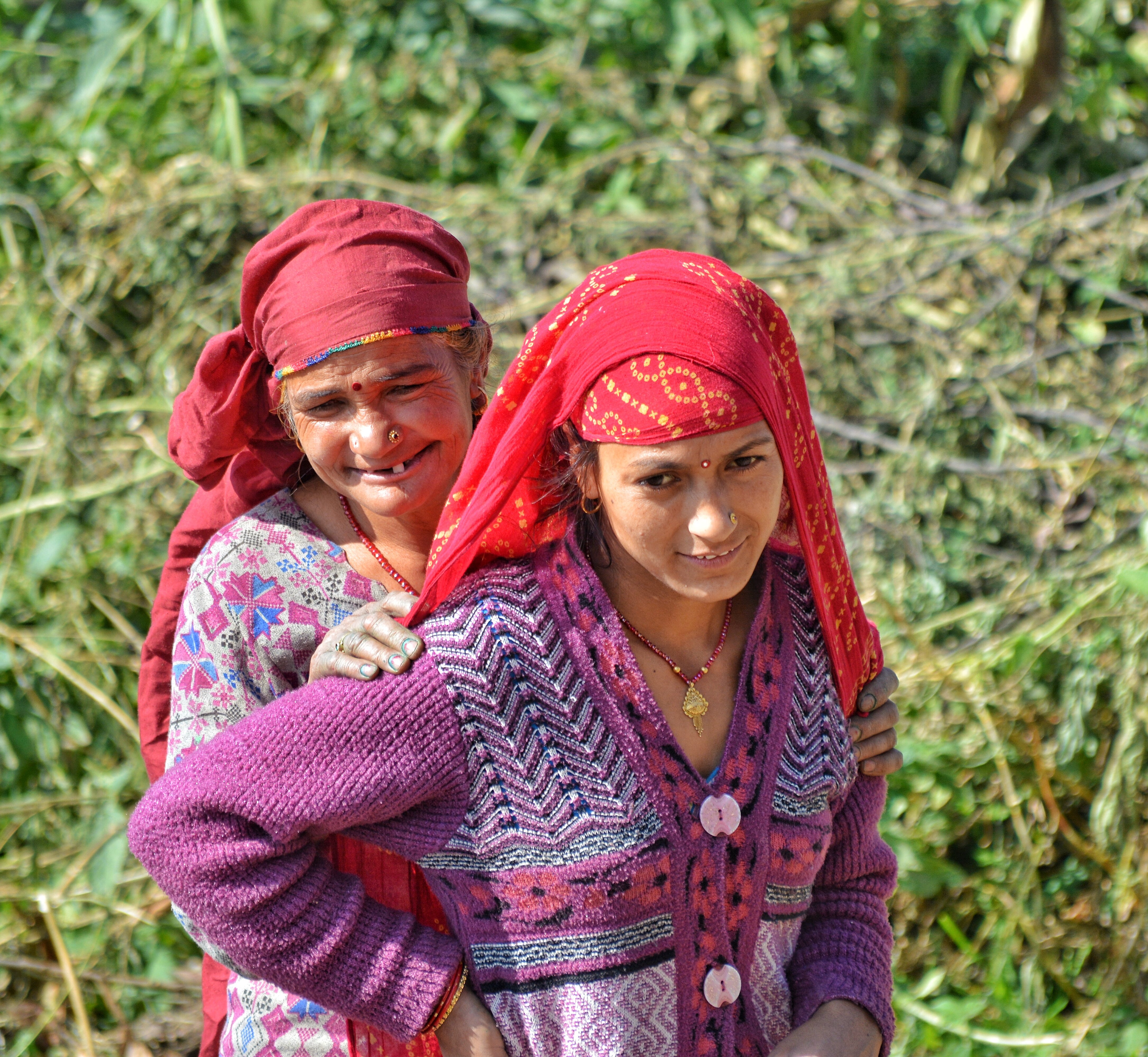 A short drive away was the fascinating Norbulingka Institute dedicated to the preservation of Tibetan craft. Entering through large red gates, visitors are overtaken by the tranquility and artistry of the surrounds. A small water course ran through, plants short and tall show off their foliage and stone paved paths create a warren of navigable options between. Prayer flags fluttered above as prayer wheels turned, with a light metallic clack, at the touch of a hand. 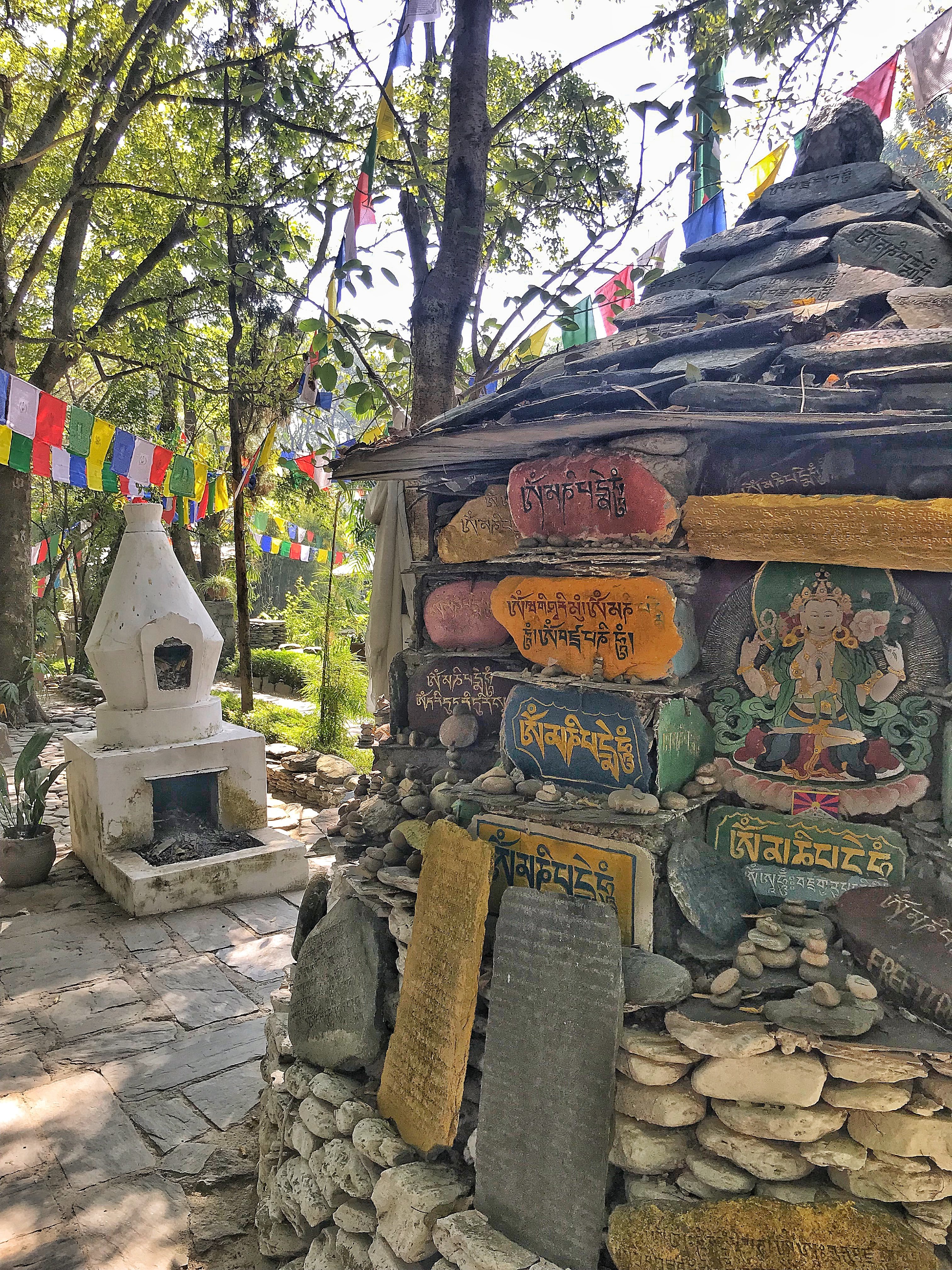 In the various buildings dotted around, all sympathetically designed, traditional crafts are expertly practised. In one, the meticulous art of painting thangkas, the incredibly detailed painting of Buddhas and allied stories. In another, needle work of similar painstaking nature. In a noisier work shop, wood carving was underway and, noisier still, a metallic statue of Buddha was being hammered into shape in the building next door. The craftsmanship and the artistry created are seen as a form of worship in their own right, though visitors can arrange participatory lessons too.

The reason for most people’s visits to Dharamsala is exactly this; the Tibetan culture. In 1959 the 14th Dalai Lama sought exile in Dharamsala after the occupation of Tibet. Given that Dharamsala is a series of steeply rising and falling ridges leading up the Himalaya’s, to be a pedant, the Dalai Lama’s home, and that of the Tibetan government in exile, is actually in the cantonment of “McLeod Ganj.” The name harks back to the 1848 Lieutenant Governor of the Punjab, David McLeod. The McLeod name is regularly omitted for touristic marketing purposes in favour of  the more enigmatic sounding Dharamsala or ‘Little Tibet.’

McLeod Ganj is a small, bustling former hill station which is also now home to the Namgyal Monastery, the harrowing Tibet Museum and the Tsuglagkhang Temple. The narrow streets were busy with maroon robed monks, Tibetan refugees and tourists. Shops and stalls selling traditional Tibetan crafts spilled out onto and lined the streets.

Restaurants, bars, hotels and businesses all jostle for position in buildings that are packed cheek by jowl and slowly building upwards to gain or maintain a view of the glorious Dhauladhar mountain range above and the hazy plains below. The few ridge top roads that bisect McLeod Ganj are nose to tail with beeping cars, and the occasional pack of languid stray dogs, whose movements through the narrow one-way system is orchestrated by a handful of traffic lights and harangued traffic policemen.

The McLeod Ganj tourist crowd is varied in age from Gap Year explorers on their first independent foray to silver haired travellers, wondering if this might be their last. Our guide cautions that young Indian men have recently ‘discovered’ holidaying in McLeod Ganj, given the settlement’s compact nature and high probability of being able to approach Western girls in the markets, bars and restaurants.

Returning to the peaceful sanctity of our hotel, on its particular ridgeline of wider Dharamsala, we gazed across at the next ridgeline, which sat between us and McLeod Ganj. To this day, there sits a Gurkha army base. As we read further into my grandfather’s letters, my mother and I were increasingly convinced that was his home. His letters talked of exploring the Dhauladhar mountain range with homemade snow shoes fashioned out of bamboo and wide-eyed appreciation of the local cultures about which he was slowly learning.

Though factions will fight, as will revolutions rise and governments fall, let us hope that the beauty and the authenticity of Dharamsala’s indigenous and refugee cultures, sitting against the majestic backdrop of the Outer Himalayas, will live on for many more generations to enjoy.

The author travelled at his own cost, on a trip arranged with Magic Tours of India, whom he can highly recommend.