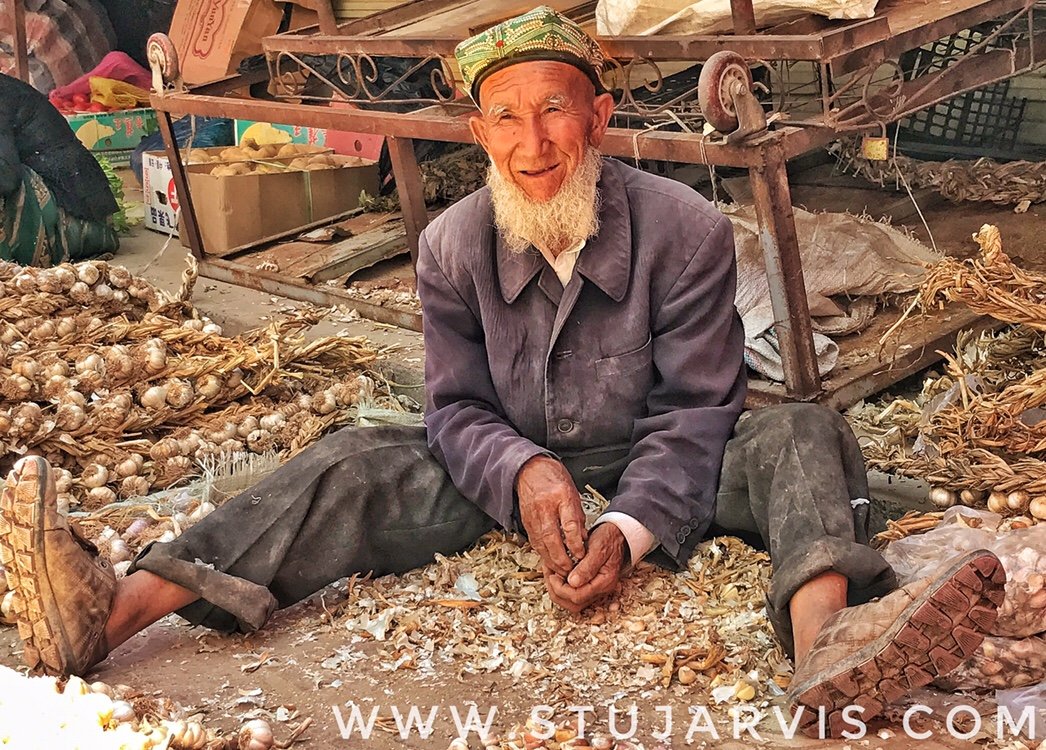 “Even before there was money, there was a Sunday bazaar in Kashgar,” the friendly Uyghur stall holder explained to me. I was not going to challenge his historical veracity but there has been a market in Kashgar for hundreds of years.

Situated on the Silk Road and the most Westerly city in China, traders from neighbouring Tajikistan, Kyrgyzstan, Afghanistan and Pakistan have long travelled the high mountain passes of the Karakoram and Pamir mountains to trade at the famed and remote markets of Kashgar.

The exotic blend of foods, fabrics and livestock exists to this day in one of Asia’s largest markets. The bazaars provide an unrivalled people watching opportunity; a glimpse into dozens of lives, at every stage of life. There are few better ways to start to understand a foreign culture, than to visit a bustling market.

The rapid development of the city has seen the famed Sunday livestock market moved north-west, out to the town’s peripheral ring road. A male preserve, the livestock market was busy with predominantly Uyghur men, smartly dressed in albeit dusty jacket and trousers and topped off with a traditional green and black doppa; a square skull cap popular with Uyghurs, Tajiks, Uzbeks and Kazan Tatars.

On the edges of the livestock market were food stalls, offering a seat and a table beneath a shade, along with a steaming bowl of mutton and broth, or perhaps a skewer of freshly grilled offal. Whilst the aroma was alluring, I decided to forgo the local delicacies.

Within the size of a football field was an orderly morass of tethered livestock. Parallel rows of a thick, long metal rail, provided a tethering point for large bulls and cows. Around them, huddles of men conferred, inspected and bartered. They slapped the flanks, thighs and rears, as they inspected every quarter of the animal in question. After the cows, were sheep in neat rows, with their rumps exposed for critical assessment. Whether a lean or fatty ass was preferable, I was not able to discern.

Sporadically, a deal would be struck. The finale to raised voices within a huddle of men, as a fistful of money was stuffed into one man’s face, only for it to be rejected, once, twice, then suddenly agreement and fervent handshakes to confirm.

Further on, herds of goats jostled in loosely arranged pens. A few old men, whose tanned faces displayed deeply ingrained wrinkles from too many days toiling in the sun, sat dejected. They clutched the reigns to a few treasured sheep, whose impending sale meant parting with a couple of old friends.

I slowly headed back towards the entrance, weaving my way through shuffling animals and gaggles of wizened old Uyghur men. I was utterly submerged and absorbed by the hubbub of social conversations, the piqued excitement of negotiations underway and the steady bray of nervous animals.

Back in the centre of Kashgar, on the historic site of the Kashgar Sunday Bazaar, remains a vast market place. No longer just a Sunday market but a daily trading behemoth. Under high corrugated roofing and ordered into never-ending square lots, here everything is traded: silks, carpets, food stuffs to suit local and foreign tastes, domestic kitchenware of both a generic plastic and delicately handcrafted ceramic variety, and Western and local fashion apparel. The entrances are many but all required airport style metal detector searches, such is the security presence across Xinjiang province.

The bazaar may be a tourist sight but it is predominantly an everyday shopping destination for the local populace, as well as traders from further afield. Expect some attention and offers of hospitality, as Western tourists are not all that regular visitors. However, neither expect nor fear being hassled and harangued, as happens in markets elsewhere in the world. 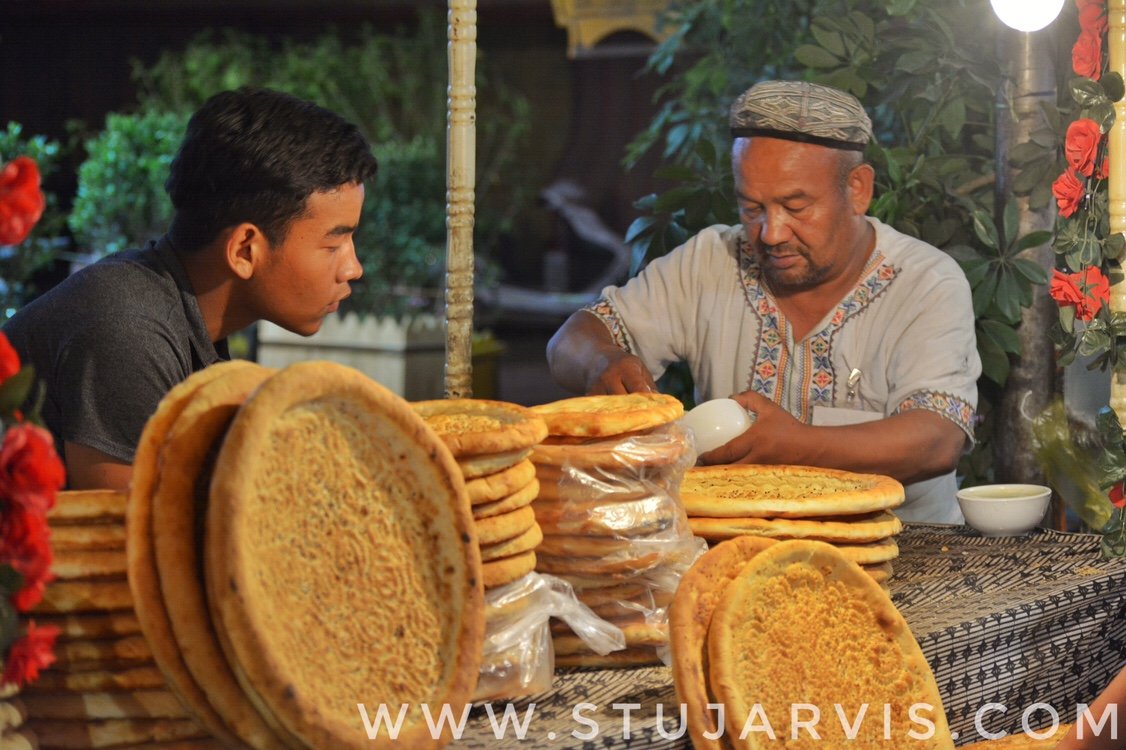 As I wandered the charming old town later that evening, not far from the Id Khan mosque, I chanced upon a delicious night food market. Lonely white lightbulbs hung above each stall, illuminating the rising steam from the pans and grills. Dexterous stall holders simultaneously chopped, seasoned and cooked the food, took orders and payment from hungry customers and served up hot portions for take-away. Any step, curb or spare seat became an eating place.

This was clearly not a secret spot, as the narrow street and small square were busy with locals and tourists. From traditional nan breads, to sheep’s head stew, to sizzling grills of mixed meats, from steamed buns to samosas to wok fried noodles, all the local food you could imagine was hot, fresh and cheaply available here.

I plated up skewers of what tasted like chicken, and found a spare ledge from which to messily eat and sloshed down a cold local beer. Enchanted by the rhythm and competing aromas of the night food stalls, I lingered there for some time.

Though the city of Kashgar has expanded dramatically and long lost its isolated caravanserai feel, seek out the original traders’ bazaars and allow yourself to drift with the ebb and flow of market life. Few better places exist to appreciate the local customs and truly immerse yourself.

Whether Kashgar’s market really did exist, “before money,” I am not so sure. A visit to the remote markets and bazaars of Kashgar, with all their exotic influences, enriches each  visitor to a value that cannot be expressed in any mundane monetary terms.