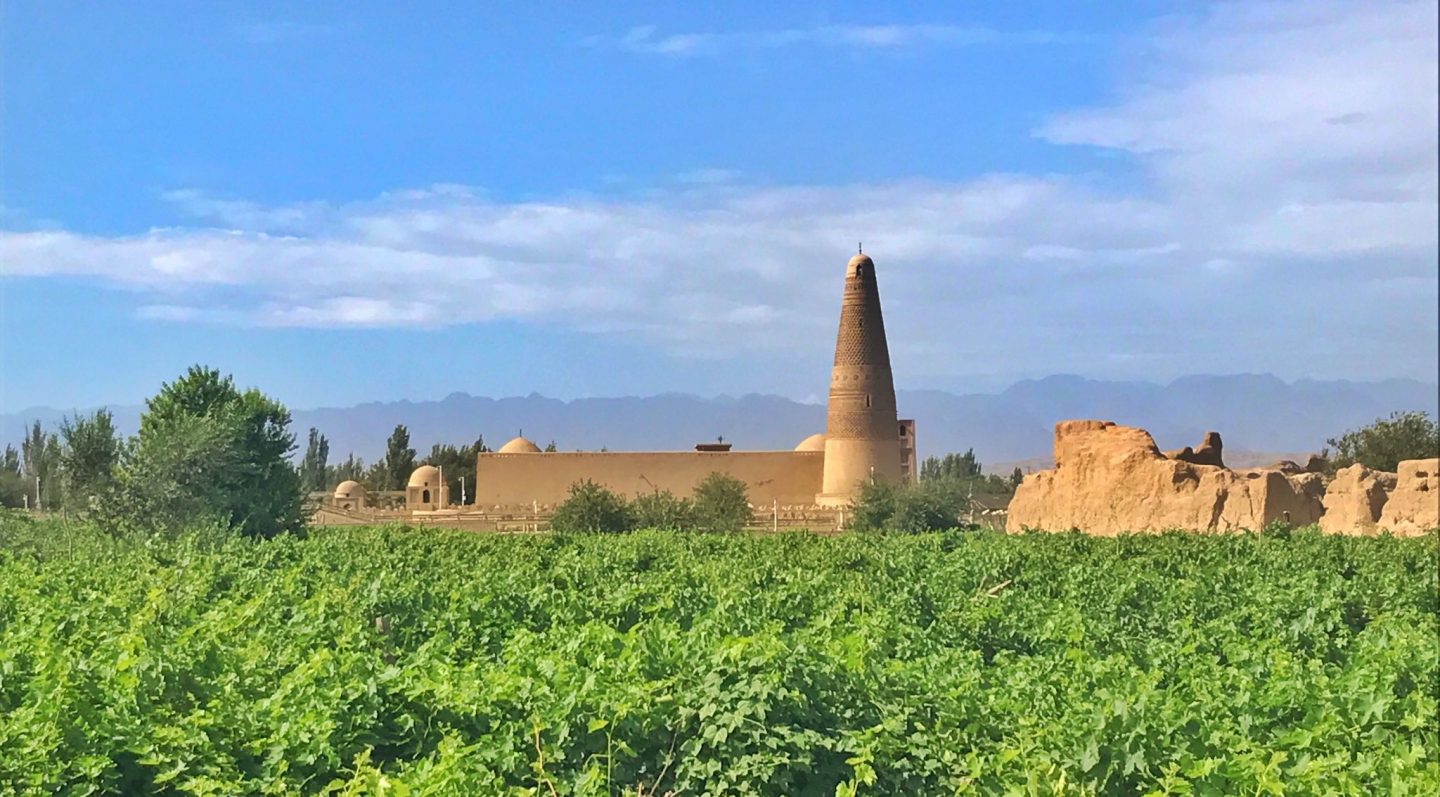 Stark and arid, there are few water courses to sustain life. Following the Silk Road east from Ürümqi, I was still skirting the northern reaches of the inhospitable Taklamakan Desert, at the foot of the Tian Shan mountains. Where the occasional stream did emerge, people settled and worked the small flashes of green fertile land.

The town of Turpan (or Turfan) sits within a geological depression, descending to 150 metres below see level. The town, and the surrounding reaches of the depression, are a confluence for all the snow melt and rainwater’s that run off the Tian Shan and other adjacent mountain ranges. For thousands of years, it has been a vital oasis on the Silk Road.

Oddly, perhaps, today it has become the grape growing epicentre of China. The combination of the soils, sunlight and irrigation have proved a vine winning combination. Sadly, the viticulture industry has not followed suit and most grapes are dried and sold as food stuffs, rather than producing any wines of note. The region also boasts a rich harvest of melons, water melons, apples, peaches, apricots, nuts, grains, and even cotton and silk.

Aside from the edible delights, Turpan is home to significant monuments, testament to the mix of cultures and religions that travelled and inhabited the Silk Road.

Standing, without fanfare, at 44 metres tall, the Emin Minaret is the tallest minaret in China. The richly textured earthen bricks are carved into intricate, repetitive, geometric and floral mosaic patterns. The style is unique to China, combining pan- Islamic features and local Uyghur traditions.

Situated a short walk from my pleasantly rural accommodation at, “Turpan Silk Road Lodges – The Vines,” the mosque and minaret are quietly nestled among the vineyards. Despite being after visiting hours, the caretaker spotted me skulking around outside and let me in in return for a tip.

Alone with history, I wandered the courtyard and exterior, including the graveyard to the rear. Though tensions exist across Xianjiang between between the Muslim Uyghur and the Han Chinese, the mosque had been well restored and was being well looked after. I could say that this was an oasis of calm but actually Turpan is low rise place where the slow and steady industry of grape growing keeps the pace of life reassuring slow.

Walking the town that evening, I was privy to the daily vibrations of local life. Most homes on the edge of the town had large, often ornate gates. Behind these lay a courtyard, within which daily life was conducted. Most often, in the courtyard was a raised platform and on which sat a wooden double bed frame. Either it was naked but for the slats or had a mattress dressed with well worn sheets, rugs and pillows. Given the heat and lack of air conditioning, many families would sleep under the stars, in their courtyard, on the bed. In more rural parts, families would even carry the bed out into their adjacent fields and sleep there.

For all the rustic charm of the dusty back roads, high-tech security cameras incongruously watched over them at every corner, testament to the on-going political tensions.

Situated on a small islet, Jiaohe is a natural fortresses, with steep cliffs falling to the rivers of the Yarnaz Valley below.

Inhabited since 1800 BC, it was not until the Mongols sacked the city in 13th century that it was finally abandoned. Today, the once fortified city is approached on a tourist toy train and via the gift shop.

Paved walkways (and plentiful CCTV cameras to ensure you do not stray off them) allow the visitor to meander many of the alleyways and allow your imagination to cast you back in antiquity, to a time of bustling residential streets, traders stalls and offices of the governing bureaucracy.

Admittedly, quite a lot of imagination is required, as the ruins are particularly ruinous. The remnants are almost exclusively large, beige pock marked walls, withered and weathered by the elements. To the north of the islet sit the remaining vestiges of the Buddhist temples. Ensure you venture this far, as they hold a little more to see and require a little less imagination, than the majority of the other indiscernible structures.

The whole site is large, extending to over 1.5km in length, although no more than a few hundred metres at its widest point. Capable of absorbing many hundreds of visitors at a time, on my visit a fierce sand storm had blown in; a reminder of the inhospitable nature of life along the Silk Road.

Though painfully set up for mass tour groups, it is a worthy and necessary visit to grasp the scale and changing fortunes of civilisations along this part of the Silk Road.

Arriving here, not knowing of their significance in popular culture, would be a bit like meeting Father Christmas for the first time and not knowing who this cheery red suited soul was. Such was my naivety, I had to ask a couple of teenagers what all the fuss was about.

Situated to the east of Turpan, the Huoyan mountain range of red and orange sandstone has been worn away by surface water from rain and snow melt. The resultant narrow gullies criss-cross the mountain side which, in the right sun light, can give the effect of a wall of flames leaping from the earth. It took a little imagination under the hazy midday sun but I could be swayed to agree.

The teenagers I spoke to were incredulous that I had not heard of the Flaming Mountains. “It’s where the monk came with the Monkey King… in ‘Journey to the West,'” they explained, mouths still open, waiting for the penny to drop. “Nope, never heard of it, sorry,” I replied. They sloped off, unimpressed and no doubt lamenting the British education system.

The Flaming Mountains receive their popular acclaim from a much loved novel by Wu Cheng’en in the 16th century. In the fantastical account of a Buddhist monk on his pilgrimage to India, the monk runs into a ‘wall of flames’ which are said to be these mountains.

The sight is not far off the highway and worth a passing glance. Clearly, the sight will mean more to some than others. Unless you are actively looking to idle away some time, you need not pay and enter the park there, as one can get a good enough view and a feel for the Flaming Mountains from the road side. 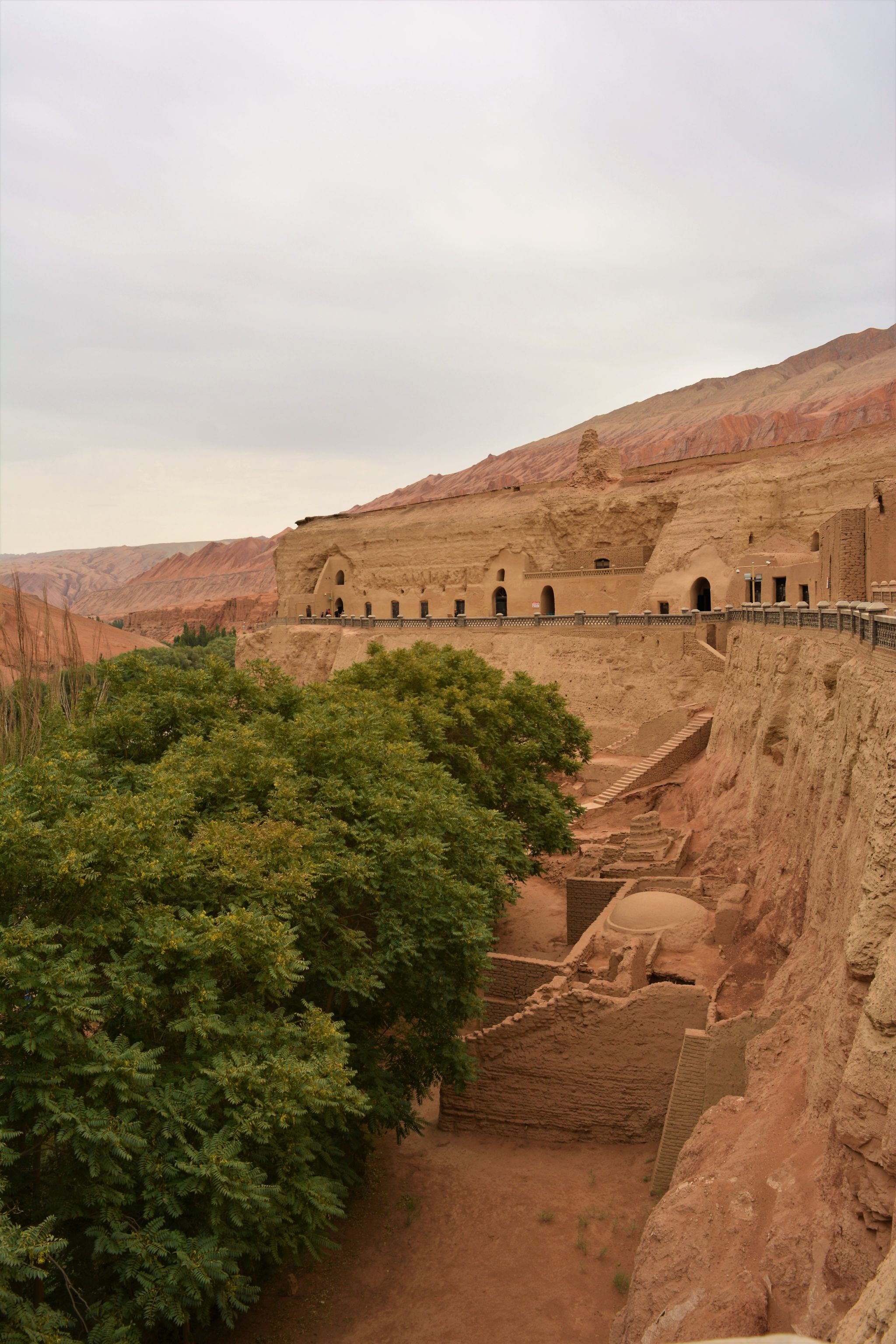 Hidden away, between Turpan and Loulan, further along the ‘Flaming Mountains’ range, in a narrow fertile gorge are the remarkable Bezeklik Caves. They date back variously to between the 5th and 14th Century.

A total of 77 caves have been cut into the mountain face with the walls and arched ceilings of each intricately decorated with murals of stories and images of, in total, a thousand Buddhas.

Redolent of the Silk Road’s multicultural traders, some murals depict Indians, Turks and Europeans, as well as Buddha. In others, large carved and painted statues of Buddha have been carved into the rock, sitting and laying. It is fair to say that whilst some of the artwork is a little basic, others are genuinely breathtaking in their fine detail.

Given the thousands of years of tumultuous history that the caves have witnessed, they have not escaped unscathed.

The hidden away location in a narrow gorge was not enough to escape the attentions of less sympathetic visitors from other religions. A number of the caves were smeared with mud hundreds, in order to hide them from certain destruction. Nonetheless, some of the depictions of Buddha and humans have had their eyes and faces gouged out of the murals.

European and Japanese explorers also found their way there and cut out neat squares of the murals to remove and place in museums around the world. Despite the precision in cutting, the square hole left behind in the exquisite mural looks like nothing more than cultural vandalism.

Today, the caves are protected by large brown metal doors, with only a dozen or so open to visitors.  Those caves that are open provide a genuinely extraordinary glimpse into the devotion and artistry of those Buddhists who created the caves many centuries ago, as well as the waves of explorers and religions that have swept across the region.

On my visit, the Bezeklik ‘Thousand Buddha’ Caves were a cool retreat on a humid, overcast Summer’s day. The experience was similarly refreshing for it was not swarmed with other tourists. The site is essential and enjoyable viewing.