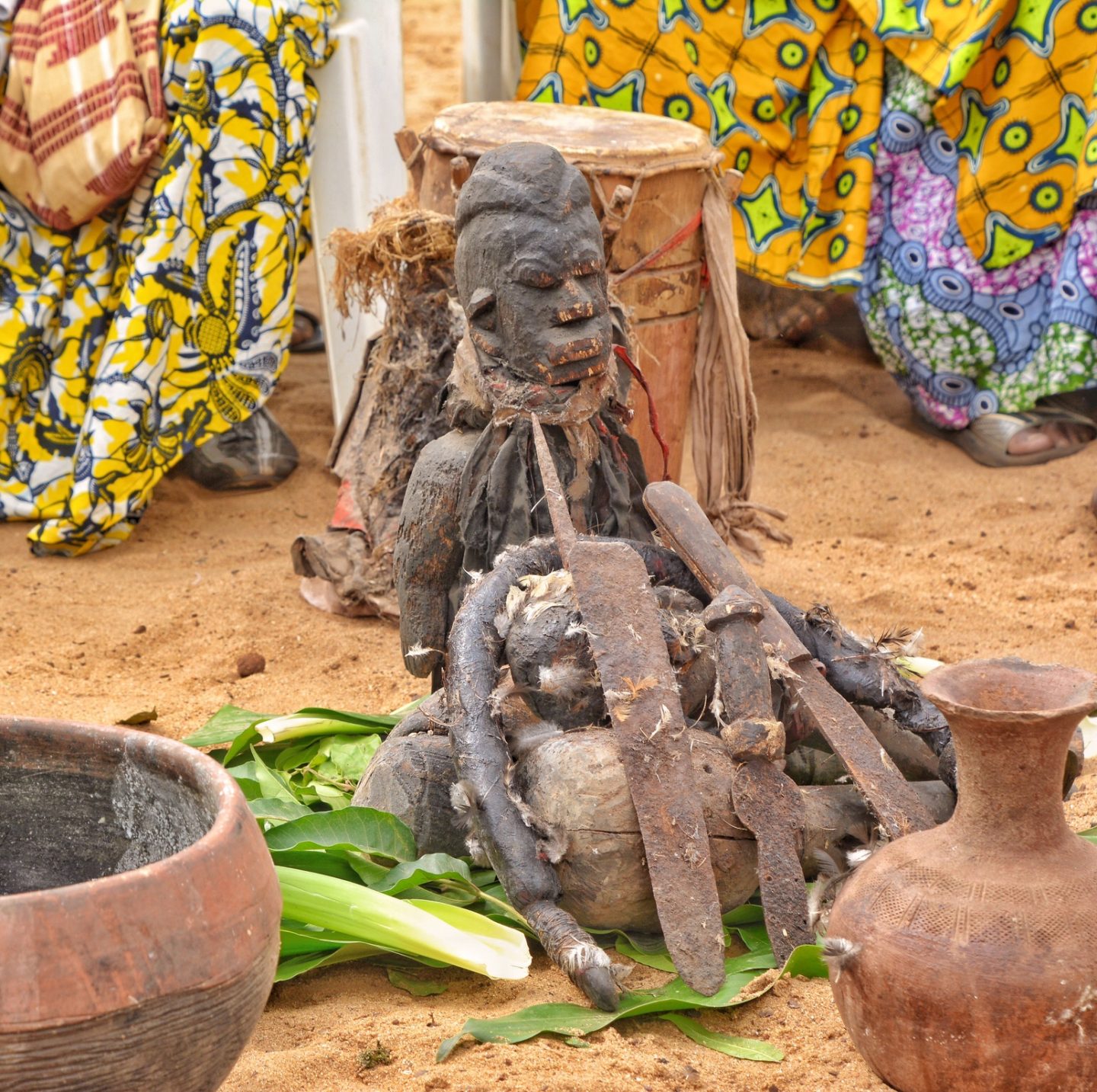 The ladies danced, bent at the knee and waist, hunched over and swathed in bright printed cloth. Their shoulders and elbows were thrust back and forth, in time with the incessant beat of hand and stick against drum. A thin veil of dust was kicked up, as their feet were repeatedly planted back into Ouidah’s hot sandy beach on Benin’s stunning West African coast line.

As the beads of sweat emerged on their foreheads, the ladies retired to the shade as others took up the beat with equal fervour. This scene was repeated numerous times around a temporary arena, in front of the imposing ‘Gate of No Return’ monument, for this was Benin’s Fête du Vodoun; a public holiday dedicated to Voodoo. 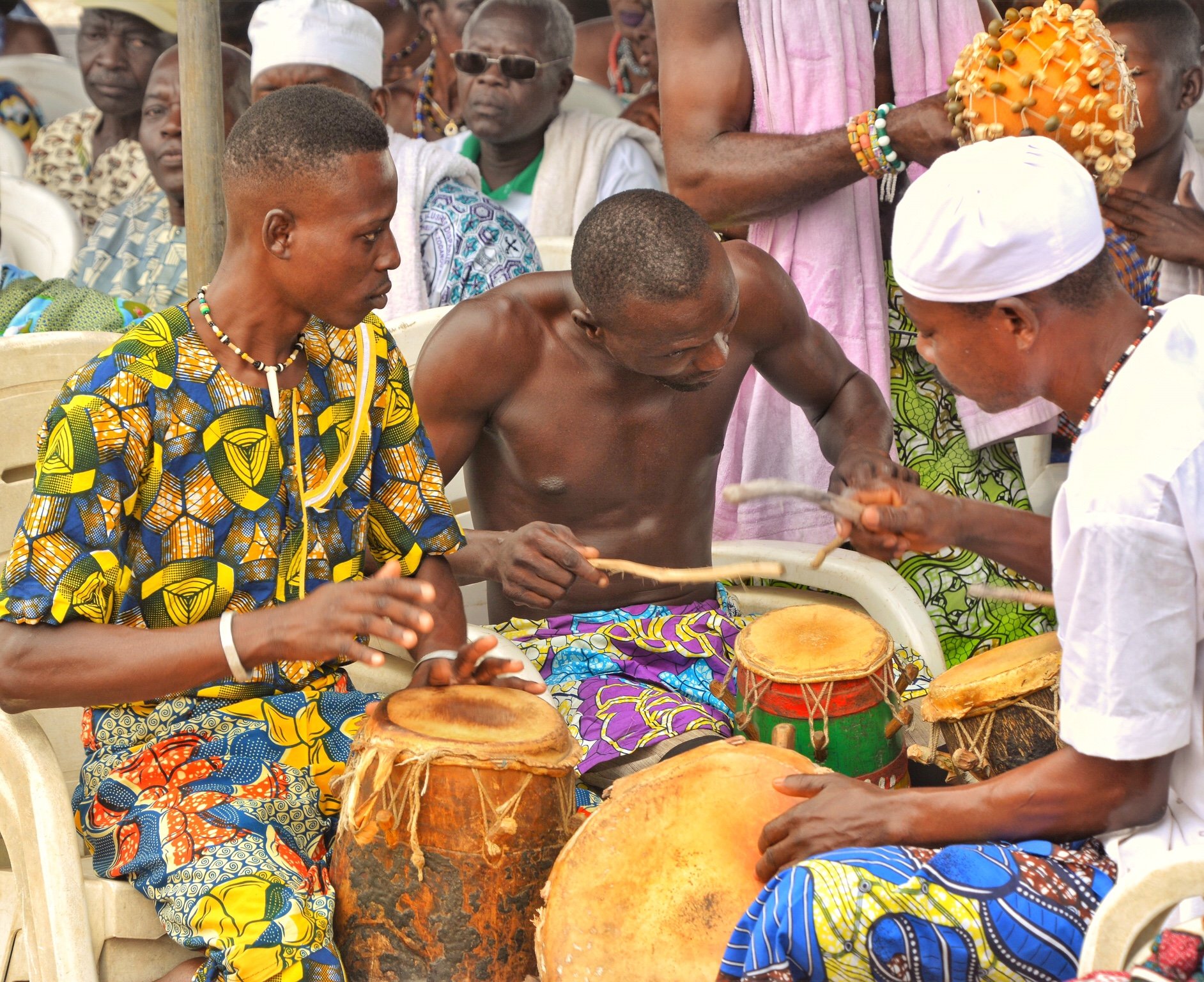 A number of small shrines of Voodoo fetishes had been set up by local villagers in the sand and carefully protected by them. Full of symbolic items, most included a small statue, occasionally with a lit cigarette stuck in its mouth as an offering to a god. Whatever indiscernible objects made up the shrine, they were all covered in a sticky black brown paste.

As the morning rambled on, there was no apparent programme or order to proceedings. There was a stage, of which few locals were paying any attention, where speeches and traditional dances were directed towards a VIP area that included the Supreme Chief of Voodoo, Daagbo Hounon, unmistakable in his robes and sequined top hat. Seated alongside him were the altogether more conventionally attired French and American Ambassadors to Benin.

The real attraction was wandering the arena, taking in the costumes, roles and rituals being played out. There were no explanatory notes to the impromptu proceedings and I rued not arranging a guide to explain what on earth was going on.

With the local police helping provide a cordon, a ceremony was performed which required sight of a sacred drum placed some twenty metres away. As gin was poured over an egg placed at the centre of chalk circles, a young goat was brought forth and sacrificed over the same spot. To which Voodoo deity this was addressed and for what reason, I cannot tell you. The concern and reverence adopted by the participants clearly meant it was an important affair. 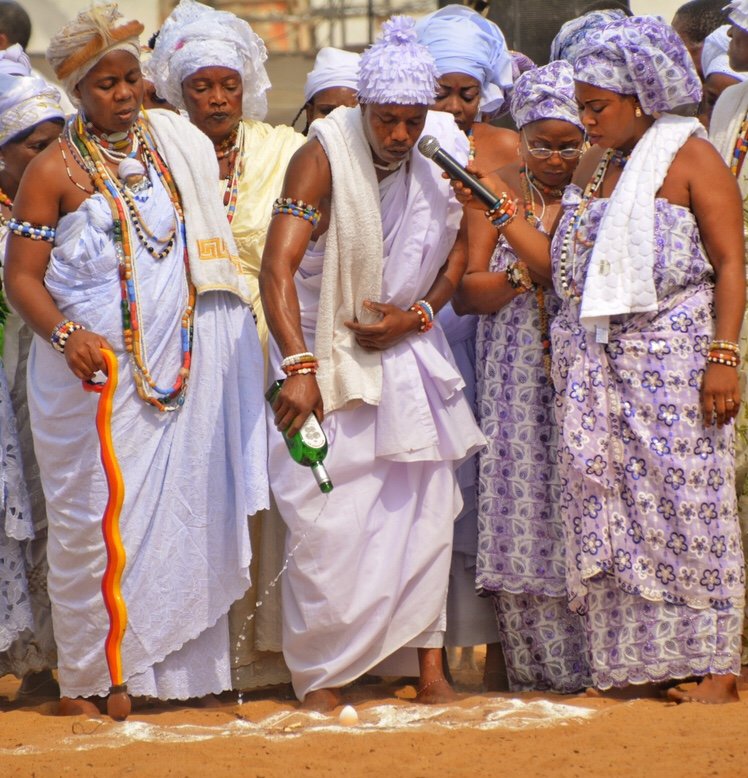 Once the VIP performances were over and the ambassadorial delegations departed, the goat sacrifices increased in frequency. As brutal as this practice may sound, keep in mind that in Benin few people are rich enough to not concern themselves with the modes and methods of food production. Animal husbandry and animal slaughter are a required means to fresh food for the majority, in as practical and every day a manner as you and I walk the supermarket aisles. 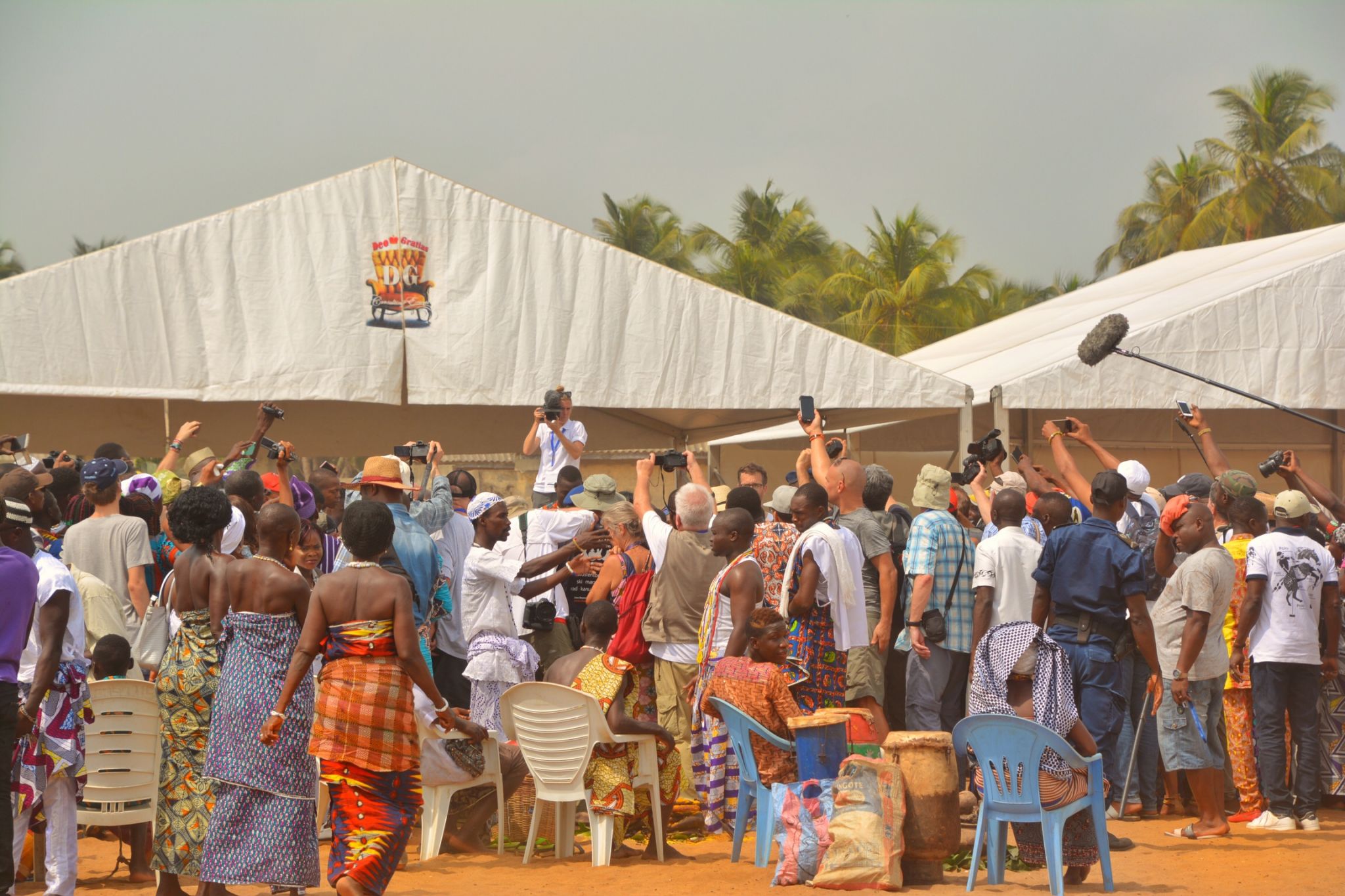 I found the packed scrum of locals and tourists, desperate to photograph and film the ritual sacrifices more unnerving than the sacrifices themselves. In one such ritual I witnessed, Voodoo adherents drank gin and sprayed it over the fetishes in equal measure. A young goat was brought forth, killed cleanly, and drained of its blood through a singular neat puncture to its neck.

The drained blood was poured over the fetish: the sticky black brown paste I had seen earlier was dried blood. The slightly inebriated adherent then practiced swinging the dead goat by its legs before doing so with gusto and releasing it. As the goat hit the sand a few metres away, a god (or gods) were speaking. Should the goat face you on landing, you must repeat the ritual. Should it face away, it is a thumbs up and you may continue with your day. 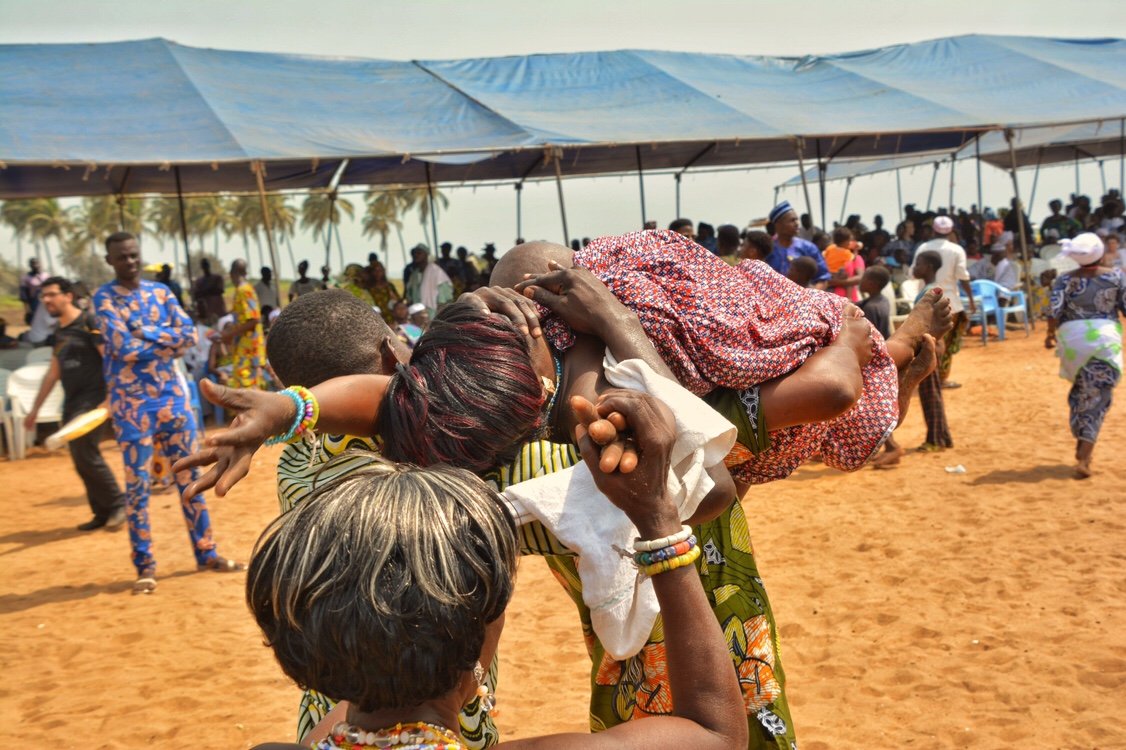 Though I saw not what caused this, many adherents were carried away from this same scene, prostrate above friends’ shoulders, apparently overcome.

More bizarre were half a dozen Voodoo followers attempting to enter a trance and allow spirits of the deceased to possess them. The process seemed clear: drink lashings of gin, spin on the spot and do forward-rolls aplenty. Add a fast drum beat or hand clapping, and the inevitable effects of too much alcohol, dizziness, disorientation and dehydration eventually took their course. 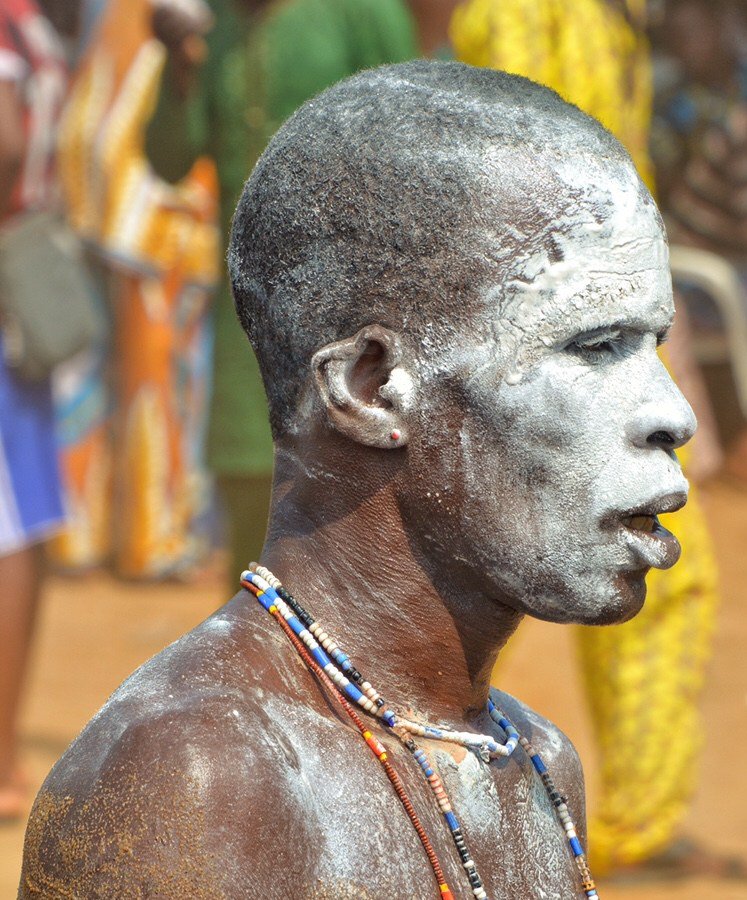 I was none too taken by this gin fuelled mid-afternoon tomfoolery, though the crowds ran in fear when one of the ‘trancers’ spun or stumbled out of control in their direction. Once believed to be in a trance, the trancer had white talc sprayed across their face to identify them. Occasionally, a couple of the trancers would lock arms, as if to wrestle.

All this, whilst both male and female trancers were topless and dressed only in a grass skirt. It all seemed a bit like a drunken rugby club social. It was clear though, that those in a trance were taken very seriously. The etiquette was to bow or lower to a knee should the trancer, being possessed by a spirit, deign to approach and speak to you.

This all unfolded in a very public space, brightly illuminated under the high afternoon sun on an idyllic touristic beach in front of a national monument. Many academics, therefore, refer to the Fête du Vodoun as being a lively performance, a re-enactment and the re-imagining of traditions, rather than it being true and actual.

Had I witnessed the same rituals, sacrifices and behaviours in a small, unlit, back-country village after nightfall, I imagine such happenings would be a little more convincing and perturbing for all concerned. 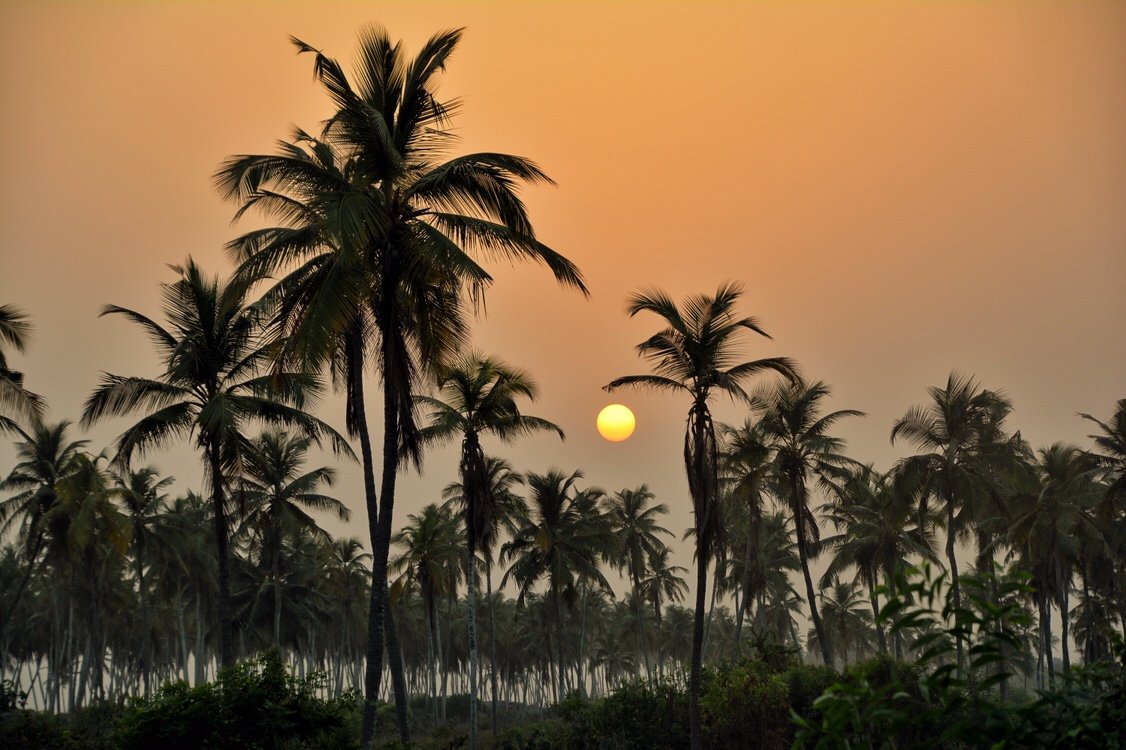 By the time the sun had set along Benin’s palm tree fringed coastline and the moon had risen high into a star filled night sky, Laura and I were safely enjoying the fine hospitality of the beachfront La Casa Del Papa hotel.

To the backdrop of the Atlantic surf crashing ashore and the distant beat of a fisher village’s drums, finally the effects of a long day and a few sips of the local gin took hold. Feet patting the warm sand, we swayed gently to the beat. Whilst we may not have been topless, covered in talc or possessed by any itinerant spirits, we were slowly falling under the spell of Benin’s extraordinary colours, sights and sounds.