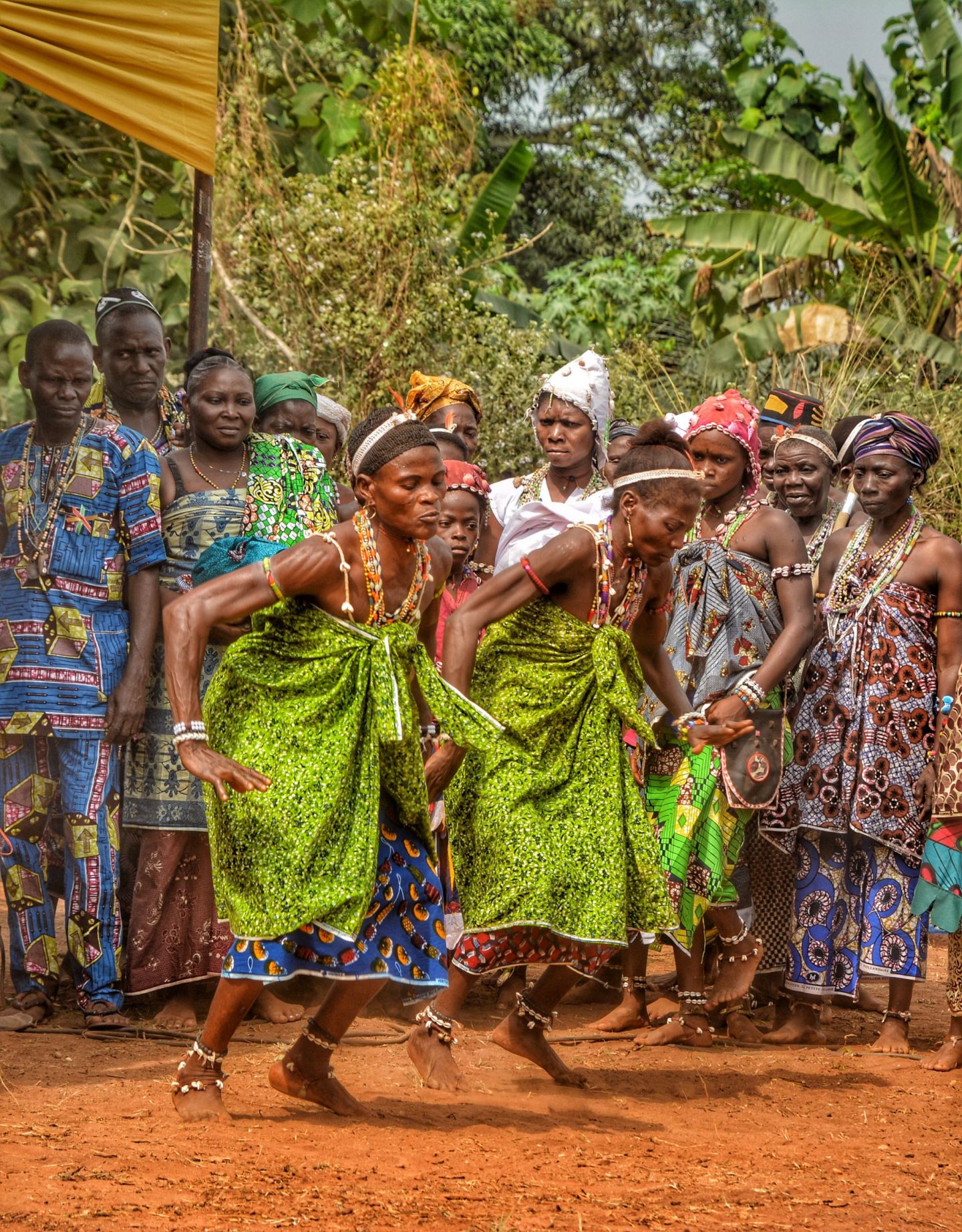 Attending a Voodoo Festival, one may fear dark practises and malevolent forces afoot. Little could be further from the truth at the Voodoo Festival in Allada, Benin, where social cohesion and welcoming in foreign guests are high on the agenda.

We travelled the dusty back roads from our hidden retreat, the wonderful Royal Palace Hotel, tucked away among the rolling fields of mango, pineapple and teak trees. With the help of the hotel’s manageress, we cadged a ride on the local version of a taxi, a zemijohn (motorbike with a driver). Bumping along and occasionally slipping sideways as the orange dirt road softened into deep sand, we absorbed as much of our environs as we could.

Where the green fields of fruit trees ended, huts with mud walls and thatched roofs emerged, congregated into small villages. Between the huts, children played and animals scuttled. In the shade, women worked, often topless, grinding sorghum and tending to large pans over hot wood fires.

By the time we reached the outskirts of the small town of Allada, it was already bustling with locals in bright print outfits and tourists weighed under with expensive cameras. It was 9th January and the town was hosting the opening Voodoo Festival to the national Voodoo holiday, the following day.

Set in motion by the ceremonial King of Allada, His Highness Kpodegbe Toyi Djgla, the small event drew a crowd of a hundred or more, seated around a small square patch of baked earth. Plastic garden chairs were set out beneath three large marquee awnings, providing welcome shaded relief from the dry season sun.

Drummers struck up a quick and unrelenting beat. Pairs of ladies took turns to dance, bent at the waist and at the knee, shoulders and arms were thrown forwards and back, with feet pounding the earth. The King arrived in statesmanlike fashion with his retinue, a large embroidered maroon umbrella was held aloft above him and two gents wafted him with fans throughout.

As he and the queen took their seat on large sofas in the front row, a number of speeches began from a nearby lectern. My French is not great and there was certainly no programme to consult but our orators were a mix of a shiny suited politician, the Grand Priest of Voodoo in Benin ‘King’ Daagbo Hounon Houna II in his distinctive sequined top hat and an American lady who practises Voodoo in the Deep South. Eventually, King Kpodegbe himself rose to speak.

Each speech, in varying degrees, concentrated on the cohesive and unifying role that Voodoo does, or should, play in Beninois society. Striking a modest and progressive tone, the King was keen to mention that animal sacrifice and hypnotic trances are not the be-all of Voodoo. Each speaker was appealing to a certain demographic; each looking for followers of their position for their own ends. 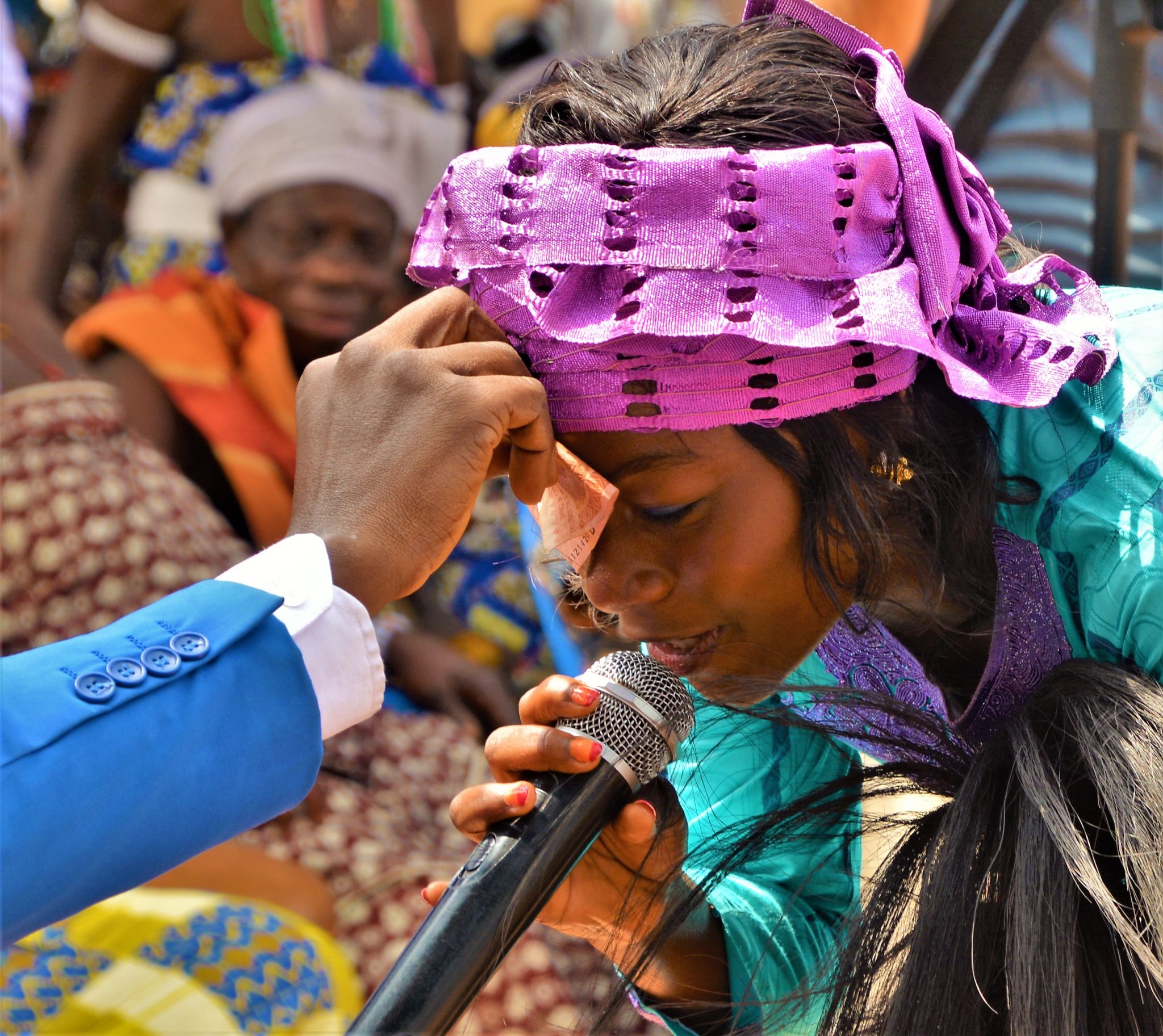 To lighten the mood, two singers emerged. The first was a young lady with her career ahead of her and, afterwards, a silver fox of a gentleman whose old hits were the crowd’s favourites. He tempted no less than the Queen of Allada herself to stand up and have an enthusiastic dance with him.

As the singers walked around the seated crowd, members of the audience ushered them over to press money against the singer’s forehead before handing them the welcome tip. The overseas tourist contingent, of which there were plenty, were here to see far stranger customs to film, photograph and gain online ‘followers’. Those with sharp elbows would not be disappointed.

The most malevolent spirit on show that morning was far from anything Voodoo. A good number of the camera toting attendees thoughtlessly wandered unrestrained through the middle of proceedings, occasionally encircling so tightly as to obscure completely what was going on.

A lady dressed in Voodoo colours of pristine white, aided by cupfuls of gin, some lit candles and shaking a shekere (rattle made from beads loosely covering a dried calabash), managed to enter a trance amid the tight scrum of keen onlookers. She emerged, perspiring and after some wailing, to tell the King and the Grand Dagboo of her visions. The expression on the King’s face told us that he was a sceptical about her brief passage to another world as we were.

Then enter the crowd’s favourite, the Zangbetos. Looking much like a spinning haystack, the Zangbetos are supposed to roam the village streets at night, scaring off criminals and evil spirits. Whirling and darting around, they were easily the most eagerly awaited and enigmatic appearance that morning. If I was not mistaken, however, one whirling Zangbetos had an advert on its back with contact details, just in case you wanted to hire a troupe of mysterious nocturnal spirits.

Thereafter, masked stilt dancers took centre stage, supposed to be large wild birds out of control, kicking up dirt with their feet. Out of control they certainly seemed, careering around the small arena. The cheap shiny masks they wore, sadly, degraded their look somewhat. 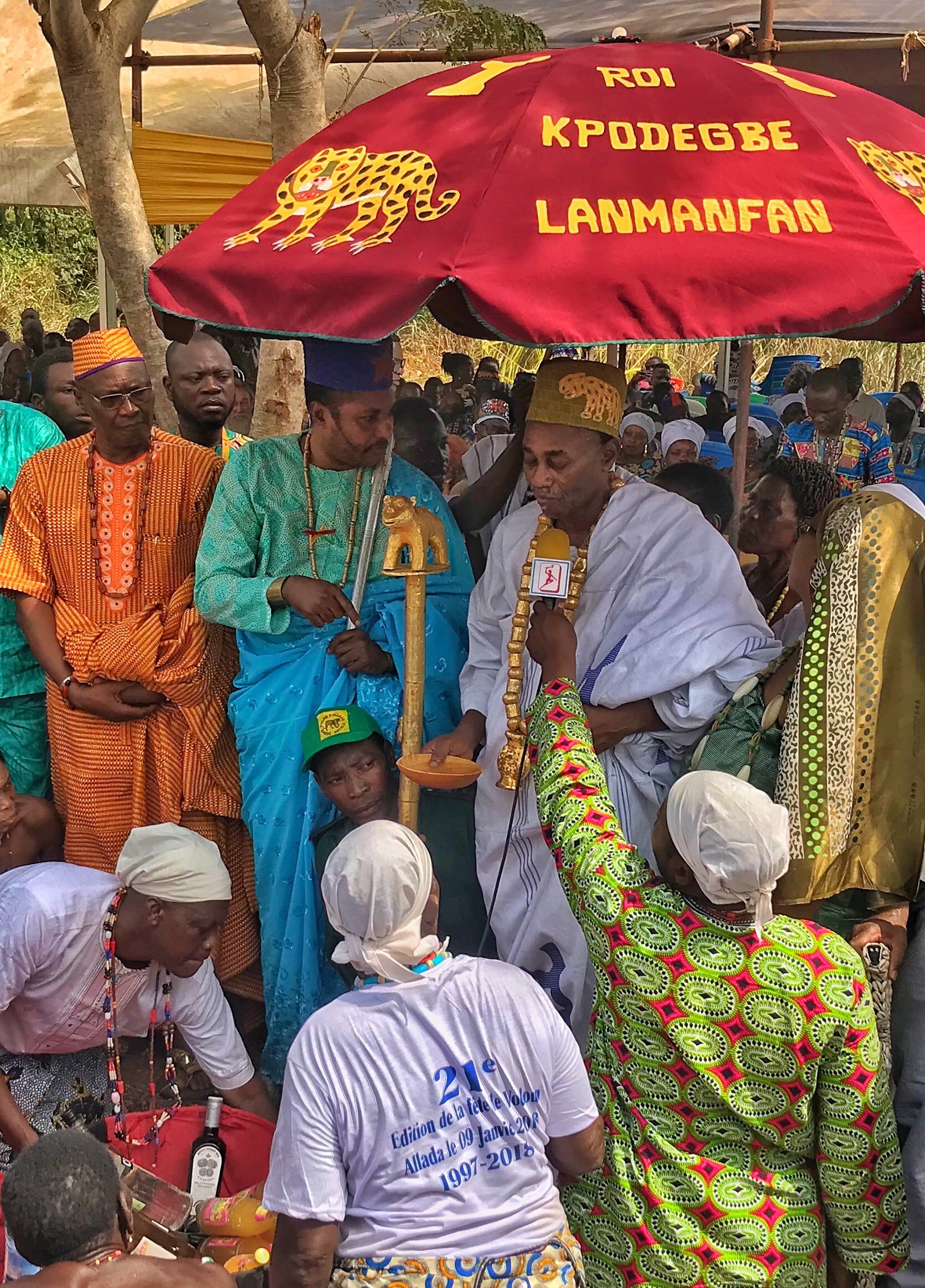 To conclude proceedings, His Highness King Kpodegbe, under his embroidered maroon umbrella and surrounded by his retinue, paid a number of thanks by filling a small dried calabash cup with gin and spilling it onto the floor with each thank you.

By the time the noon hour had been breached, the audience, performers and orators were slowly dispersing. Compared to the Voodoo fictionalised and stigmatised in Western media, this was a remarkably staid affair.

It was a colourful orchestrated opportunity to draw in and please a diverse audience from near and far. For those with aspirations to do so, the Allada Festival did, I hope, provide the exposure and, in time, the followers that they had so clearly come here to find.

The author travelled Benin at his own cost, arranging all transport and accommodation through the Royal Paradise Hotel, whom he can highly recommend.