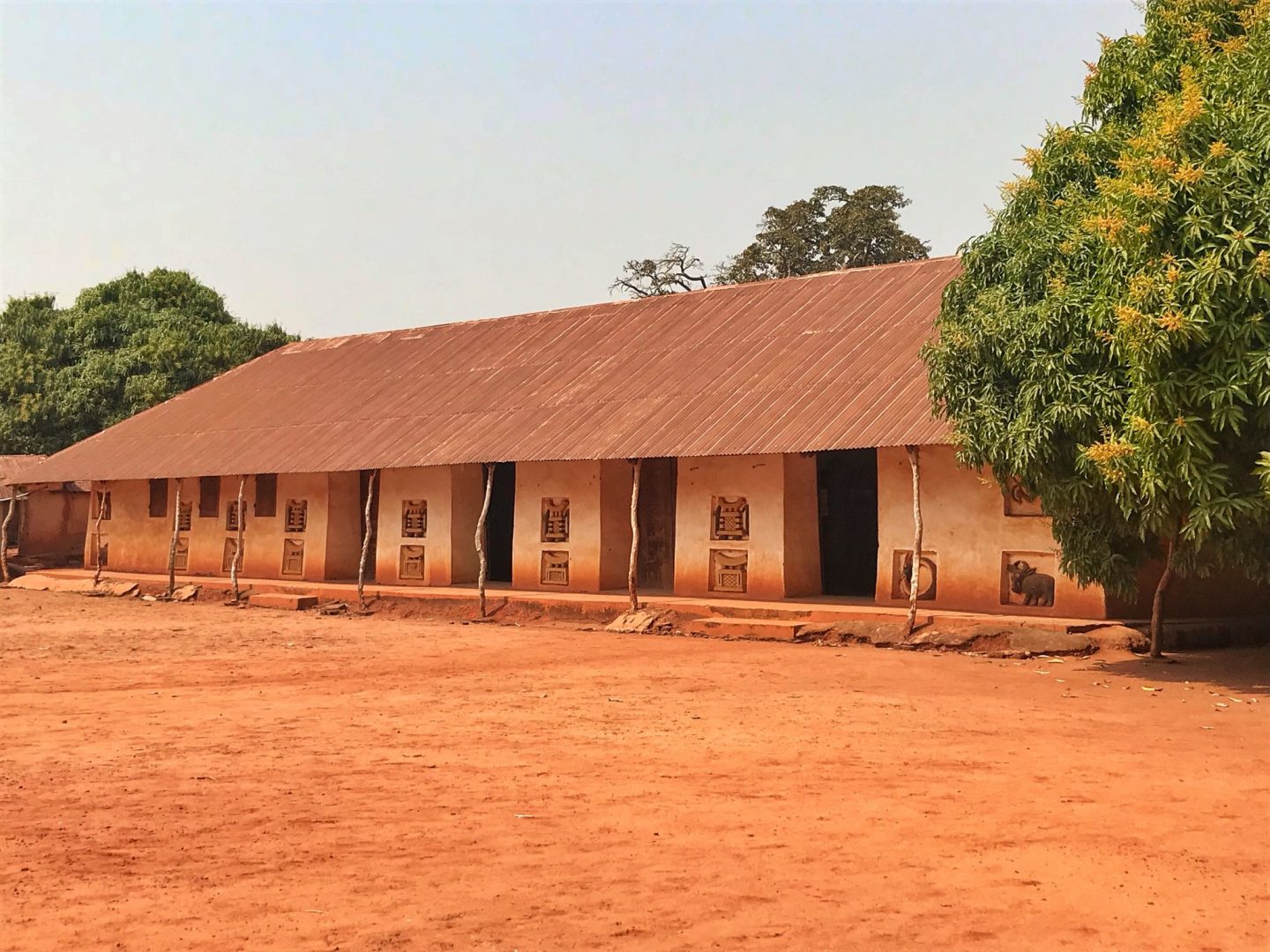 A fearsome regiment of female, “Amazons,” would have awaited us but a hundred years ago. Had we wished an audience with the King, we would have joined the queue of suppliant souls proffering gifts. Had we caused the King displeasure, we may well have found ourselves sacrificed in his honour.

Today, our welcome to Royal Dahomey Palace in Abomey, Benin, was a lot warmer. Through the large wooden doors, we bought a ticket at the ticket office and our guide appeared on que.

As we entered the first expansive red-pink sandy court yard, ringed with single storey white washed walls and buildings, the guide’s instruction was clear: no photos. Never helpful for a travel blog but reverence for the Kingdom still lives long after its demise.

In an age of waring African kingdoms, primes inter pares was the blood thirsty Kingdom of Dahomey. Drawn from the local Fon people, it ruled from c. 1695 to c. 1900 across what it is today, southern Benin. Only two palaces of the original dozen remain accessible and both have had significant recent restoration after high winds and bush fires caused damage.

The royal palace complex was once home to royal apartments, temples, sacrificial altars, villages for court members, military barracks, markets and open squares. Today, the various buildings and rooms are less discernible. The thick walls and pitched corrugated roofs provide cool environs inside the long narrow buildings. Shaded cloisters, decorated with bas-reliefs and a rattan ceiling, provide welcome relief from the sun and the chance for a sneaky photograph.

As our guide slowly toured us through, we passed countless glass cases and displays of relics: clothing, jewelry, weapons, furniture, the king’s umbrella. Pointedly gruesome, was King Ghézo’s thrown, consisting of a highly carved wooden stool but sitting on four skulls of his enemies.

When not making war, King Ghézo had other things on his mind. His large harem had private quarters next to his. Their well-tended lives may have been better than that in the surrounding villages but it was also a time of dark mystical belief. We were shown to a circular hut with a pitched roof, which was unremarkable in many ways.

There was a convenient underground passage from it to the King’s chambers. Except, it was only built when King Ghézo died and members of the harem volunteered to join him in the afterlife, poisoned and buried – hopefully not still alive – in the hut. 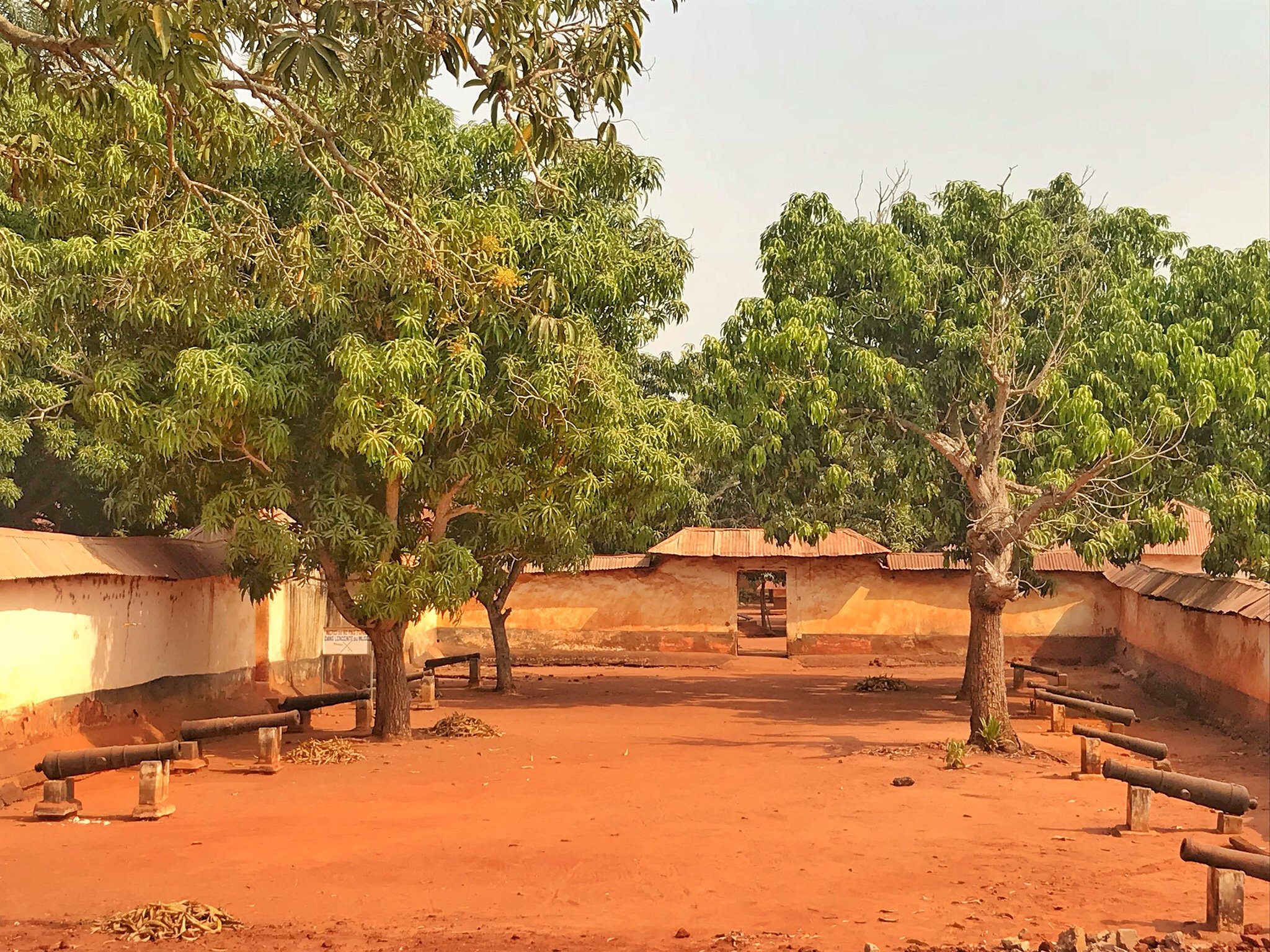 Around the palace grounds sit innumerable cannons. They represent not only lives lost in battle but lives lost to slavery. The Dahomey Kingdom are widely reported as having been active in the slave trade, raiding and rounding up those outside their kingdom to sell to the European slavers. They were paid handsomely in cannons: each armament was worth 21 female slaves or 15 male slaves.

The end of the slave trade seems to have diminished the power of the Dahomey Kingdom who were ultimately vanquished in the second Franco-Dahomean war at the end of the 19th century.

Today, the quiet palace grounds are calm and peaceful, speckled with the odd tree and punctuated by bird song. The meandering quadrangles, lightly dusted in the pink-red sand, is a very calm and pleasant way to learn more about a fearsome kingdom that was anything but calm and pleasant in its day.

For a chance of seeing what rural life is like today, we took a drive into the bush. Walking through a dusty conurbation of huts, we were welcomed with warm smiles. An offer of a local fiery brew, cloudy and rich in zesty ginger, came our way and was cautiously accepted.

We were entranced by one family at work. More specifically, the ladies of one family at work for, uniformly, the men of the village were away at work. A large hot cauldron bubbled a froth from which the curds were scooped off and into a gauze to drain. When able, the gauze was tied and left to sit, like a large steaming wheel of cheese, in the sun.

Leaving the curds to dry, we wandered the randomly assorted huts. The only two storey brick building had been home to a venerable old man who lived to the ripe old age of 175 years old. We smiled on hearing this but the locals were adamant and had erected a large sign, including his age, to honour his passing. Unless we were talking different calendar years, this underlined to us the lack of education, or record keeping if nothing else, in the villages.

Returning to the ladies at work, their produce was ready to carve. Known as ‘soldier bread,’ it was a large and tasty tofu loaf to our eye. She would sell it for a small profit in the village and at the market, which would help buy more food for the family.

The Amazons of the Dahomey Kingdom may be long gone but their spirit of independence, capability and resourcefulness certainly lives on.

You may also enjoy: