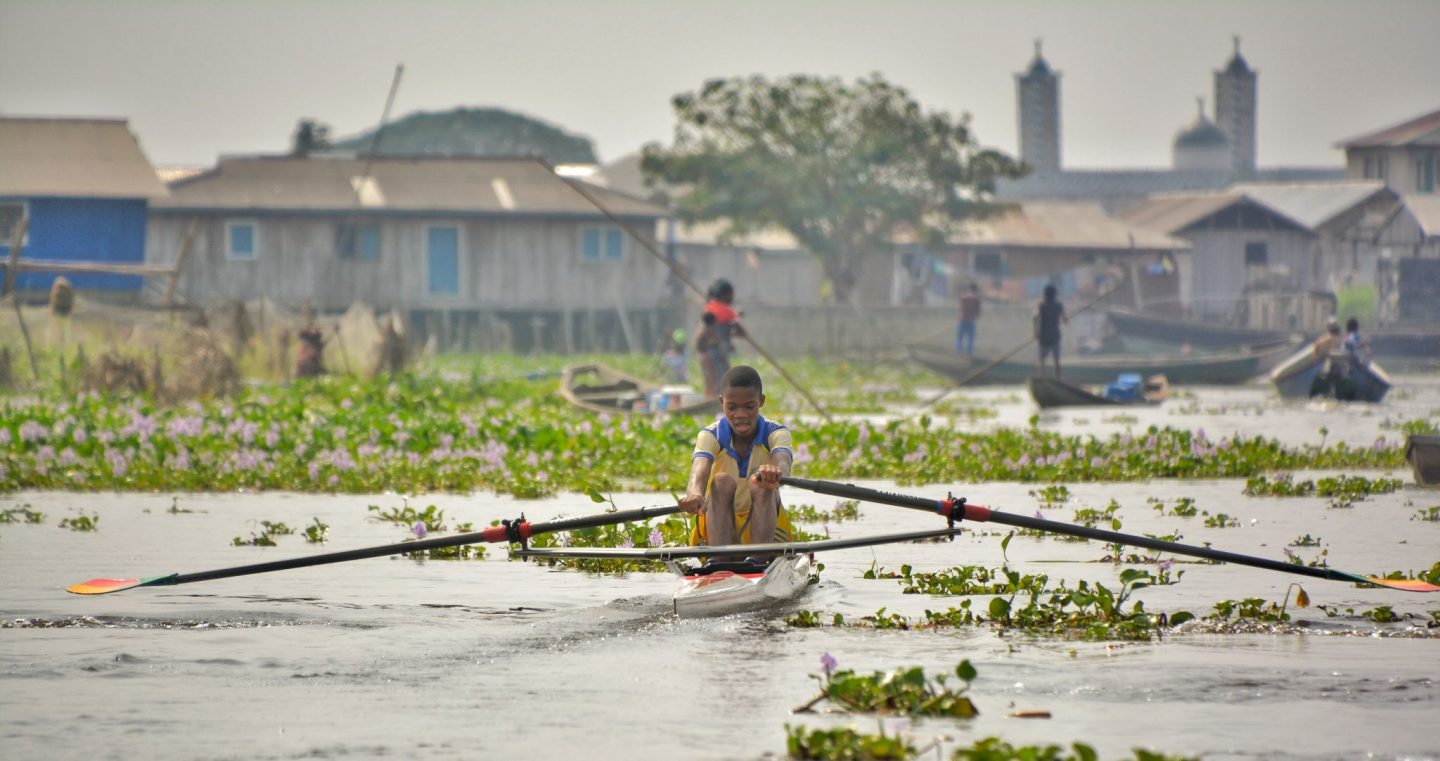 Ports are rarely without hastle and hubbub, worthy of escaping at the soonest opportunity. Large ladies swathed in bright print dresses strutted with trays balanced upon their heads, heaving with fruit, fish and sundries for sale. Long, thin wooden pirogues bobbed and jostled cheek by jowl in the shallow port.

This was the first or last taste of dry land for those going to and fro the stilt village of Ganvie, situated far out into and precariously above lake Nokoué. The village was first built in 16th century by the Tofinu people, trying to escaping marauding Fon warriors, who kidnapped men and women to feed the slave trade. 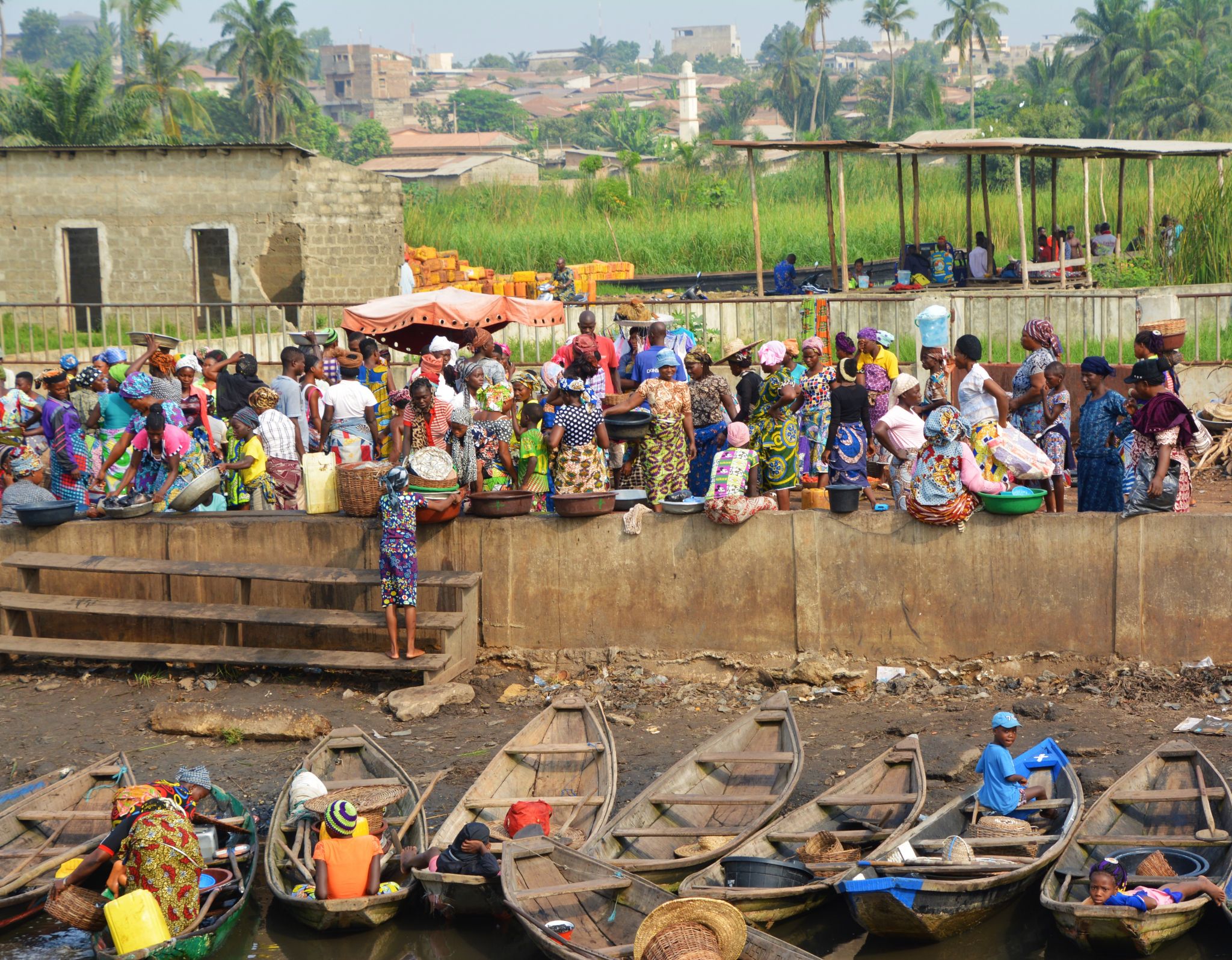 Today, it is home to a staggering 20,000 people trying to escape the marauding pace of everyday life. Ganvie now boasts a school, a hospital, floating shops and even a hotel for the more adventurous. Unsurprisingly, the wooden homes set on stilts above the shimmering lake is a popular tourist sight and easy day trip from the capital, Cotonou.

Arriving at the small port, we were shown into a dusty office to purchase our tickets, pay for our obligatory guide and pick up the cumbersome but equally obligatory orange life vests. I forget the cost but remember thinking, as ever, it seemed expensive locally but yet mere peanuts, if we were back in Europe.

Leaving the bustle of the small port behind us, we slowly motored across the tranquil lake. Every so often, pirogues of varying lengths and widths would pass in the opposite direction. Mostly, they sat low in the water, laden with people sitting in single file and any luggage squeezed in the gaps between. Courteous waves were exchanged though there were very few smiles and, as we learned, they were less than excited about having their photo taken. 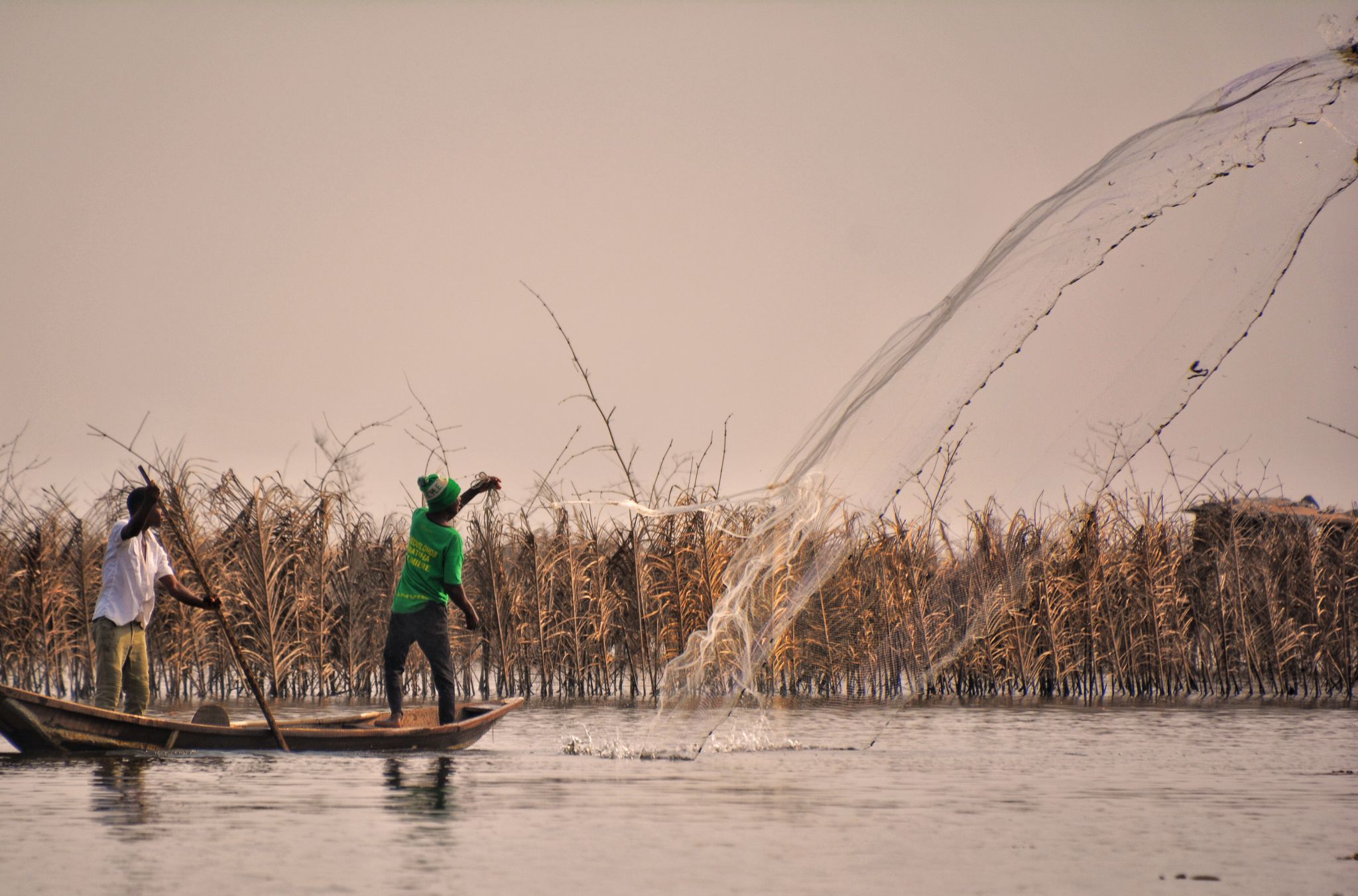 Standing up in their narrow boats with great balance, fishermen cast their nets into the waters. Fences of a sort had been created with dried reeds submerged into the shallow lake bed, perhaps to discourage any bigger fish from swimming too much further.

As we entered into the village, all manner of stilted houses were to be found: long and neat, small and rickety, some overflowing with children, others a place of industrious work. A few had noticeably subsided and looked close to collapse, emphasising the potentially fatal perils of poor construction. Whilst most roofs were corrugated metal, the walls were flanks neatly aligned wooden poles, mostly unpainted and left a silvery grey.

Most buildings had a veranda over the water, most noticeable where young infants played without barriers between their enthusiastic high jinx, the edge of the veranda and the lake waters a metre or so below.

We were first deposited at a tourist souvenir emporium. Fun to explore briefly, walking the planks with the water clearly visible below but it served us little purpose. We asked to continue on shortly after. Outside, a floating market of assorted pirogues bobbed together. Ladies in wide brimmed hats sat in their respective boats chatting, angling their hats to ward off the sun and, accidentally on purpose, any potential photographers. In front of them sat a pile of clothes or bags of fruit for sale, which they occasionally rearranged out of pride, habit or boredom.

The waterways were a steady stream of activity, with pirogues piloted by young and old, occasionally bumping and grinding passed each other. Thick patches of purple flowering green lilies covered the less navigable waters under and between the houses.

A gentile tour of half an hour or so was enough for us, absorbing the aquatic architecture and riparian way of life. Our guide was not the most garrulous of fellows and information was hard to extract, exhausting our enquiries and hastening our return. 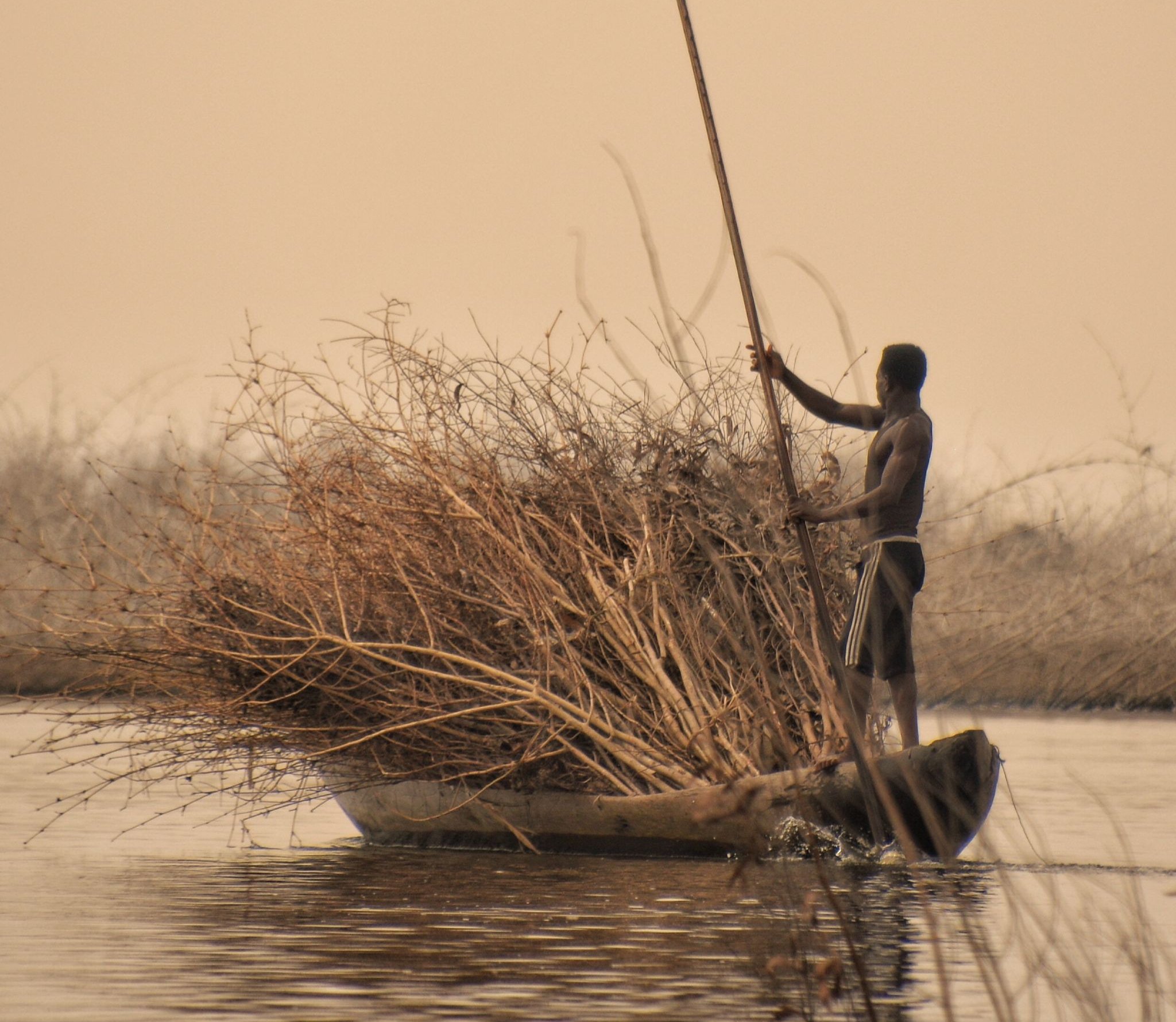 On the return journey across the humid and hazy waters, we watched with admiration as fishermen cast and re-cast again their nets, yielding painfully little each time. A shirtless man harvested the widespread reads, with his pirogue piled high with his more fruitful efforts. Elsewhere, another man entered the water to tend to a reed fence we had spotted on the outward journey.

It was a fascinating glimpse into this rare way of life, removed from the infrastructure and bureaucracy of the land. The attraction of escaping ‘civilisation’ on land is clearly as strong today as it was when the village was first constructed. The same momentary escape to the water for us tourists clearly marks Ganvie out as a popular and regular sight-seeing destination.

Though nothing too overt was said or done, there were no beaming smiles or a welcoming ‘bonjour’ directed our way, as we had enjoyed without fail across Benin. Rather, the villagers turned their heads away from the gaze of us and our cameras. I left with the overriding impression that the villagers’ desire to escape firmly includes from us tourists too. 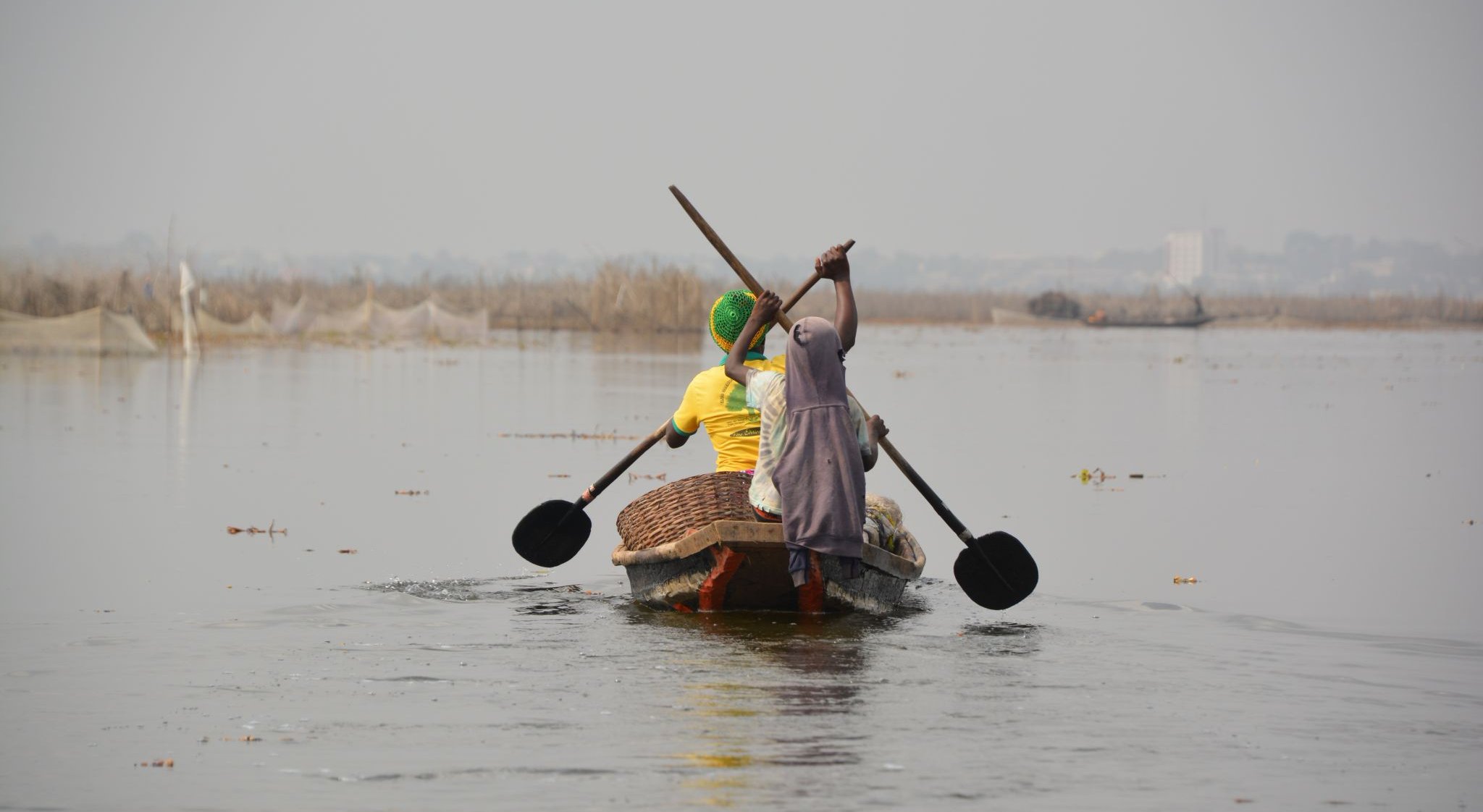