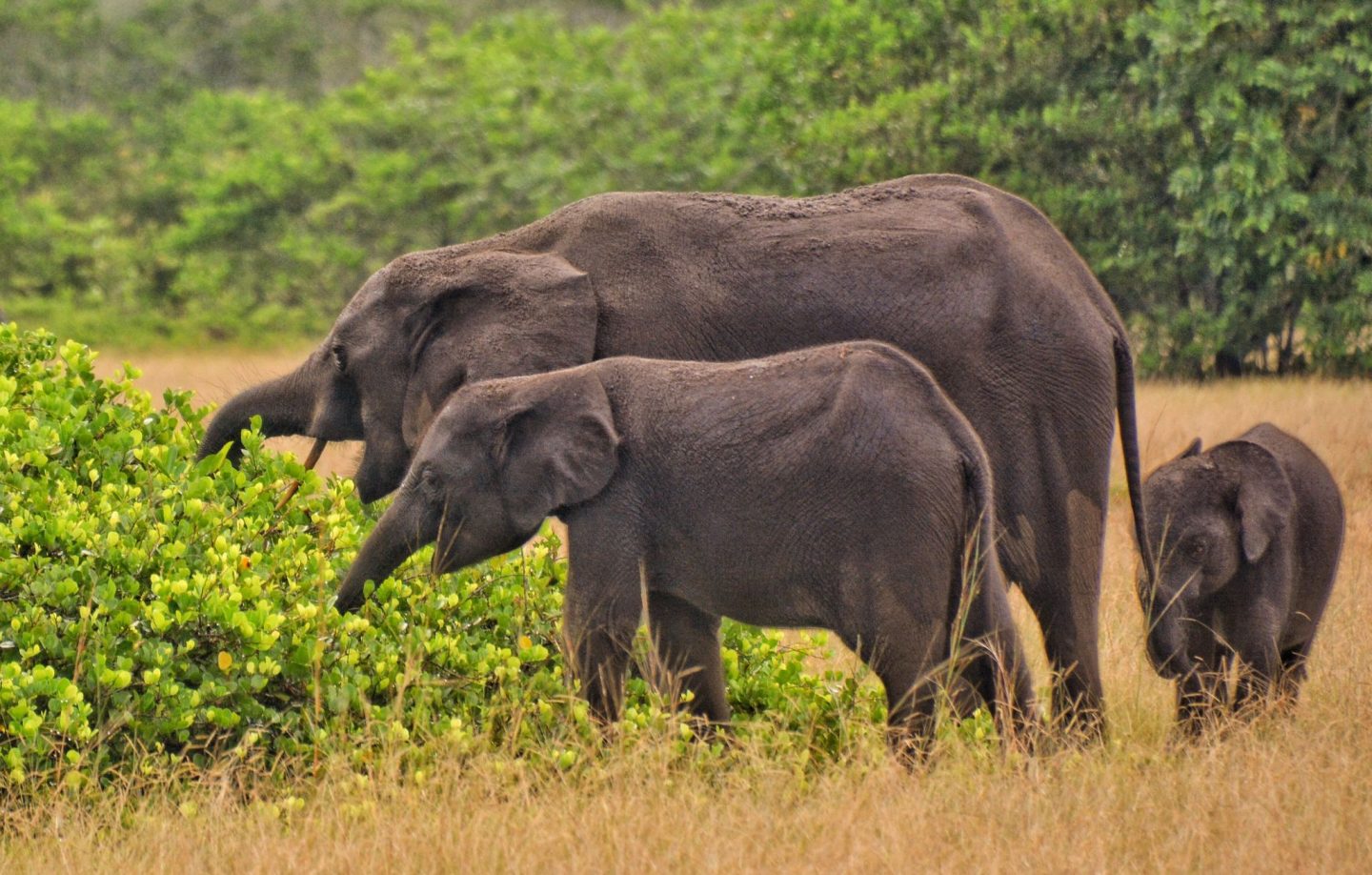 “Luxury is a dangerous word, when it comes to safari,” mused Janni, director of the remote Loango Lodge. Perched on the banks of the vast dark waters of the Iguela Lagoon, the lodge’s dozen or so substantial wooden cabins are tucked deep inside the expansive 1,550 sq km equatorial forests of the Loango National Park.

Loango Lodge was once the preserve of well-heeled clients flying around Gabon on luxury safaris in private planes. A dispute with Gabon’s aviation authority grounded flights to the Loango National Park, leaving it a punishing 4 hour drive from Port Gentil along pitted tracks, often deep in rain water. Visitors to arguably the premier of Gabon’s 13 national parks, have therefore, reduced to a trickle. What better reason to pay a visit.

The Lodge remains one of only a couple of ways to experience Loango’s stunning equatorial ecosystem and certainly the best appointed. The National Park’s wide savannah grasslands allow for excellent game viewing, as ‘pygmy’ forest elephants and skittish red river hogs emerged from the dense jungle forests to feed. Herds of buffalo and flocks of birds grazed happily in the open. 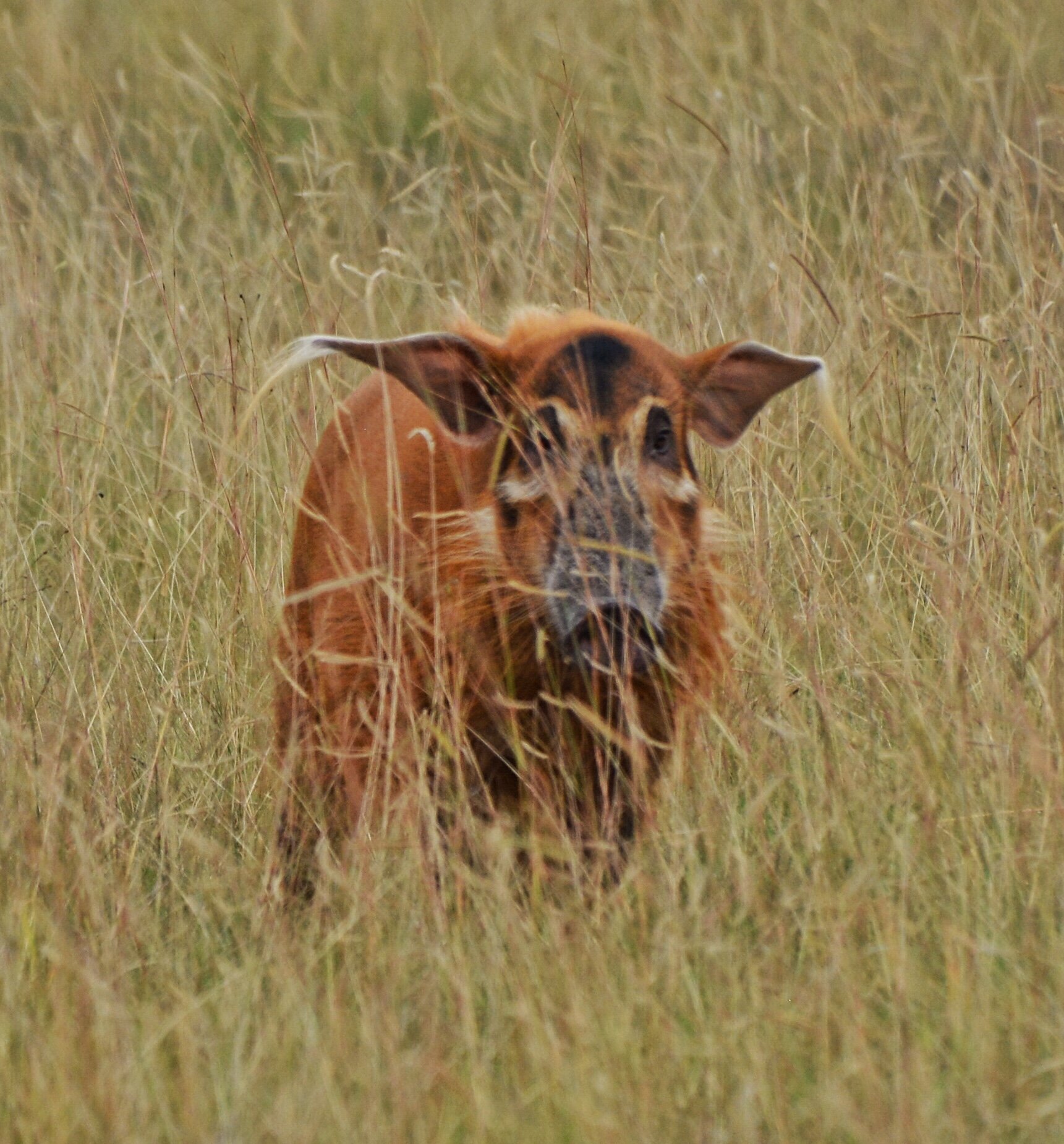 Tidal lagoons and mangrove forests provide ample fodder, feeding places and refuge for all manner of aquatic life. The most iconic scenery is along the white sandy beach where the forest elephants roam to feed on the forest fringe, crocodiles slip cautiously from the lagoon onto the beach and hippos are said to emerge for a dip in the crashing surf. The fishing is reportedly excellent and whale sightings common place in Winter months.

The journey to Loango is a story unto itself but suffice to say after four hours on dirt roads, crunching through the gears to climb eroded forest tracks, and slip sliding our way through deep mud, we did eventually pull into Loango Lodge.

A welcome cocktail was an unexpectedly high-end touch, as I entered the impressively high domed bar and restaurant. Walking through to the veranda, the view was unadulterated natural beauty: the rich dark waters of the lagoon and the far shore visible. The only sounds were the light chirp of birdsong and the lapping waters of the lagoon. Not another building or soul was in sight. 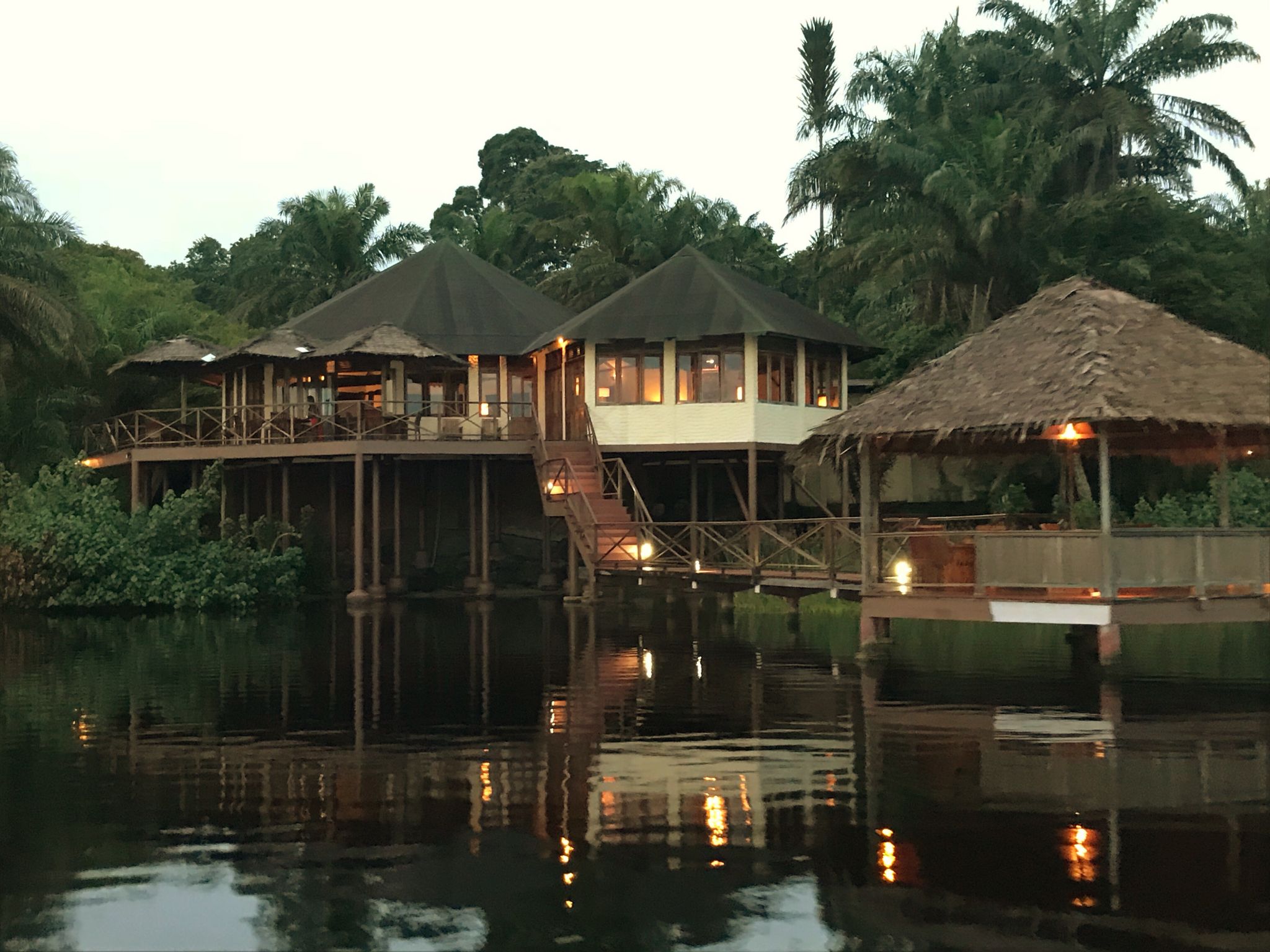 Nestled among trees and at the end of a paved pathway, my air conditioned wooden chalet was complete with a reception room, bedroom, bathroom and veranda overlooking the lagoon. There was a hint of aging gracefully and one suspects the well-heeled guests would expect the cabins to have a modernising face-lift, if they were to return. I was not so hard to please and reveled in the working air-condition, clean sheets and the only sounds being that of Mother Nature rustling outside.

To get me out exploring the park, I was soon racing across the lagoon in one of the Lodge’s two speed boats. On the far side of the lagoon are two open-sided safari vehicles. Clambering aboard, we took a slow tour of the savannah, soon chancing upon a large herd of forest elephants. To my eye, they are appreciably smaller and browner than their East African cousins. We approached on foot at first, though all locals and guides are palpably aware of just how dangerous the elephants are and never wish to approach too close.

The elephants seemed pretty nonchalant, feasting on the foliage, though always keeping their youngest hidden among their group. With strong sense of smell, their trunks would often be held aloft like a snorkel, to sniff the air, providing a kind of long range radar. 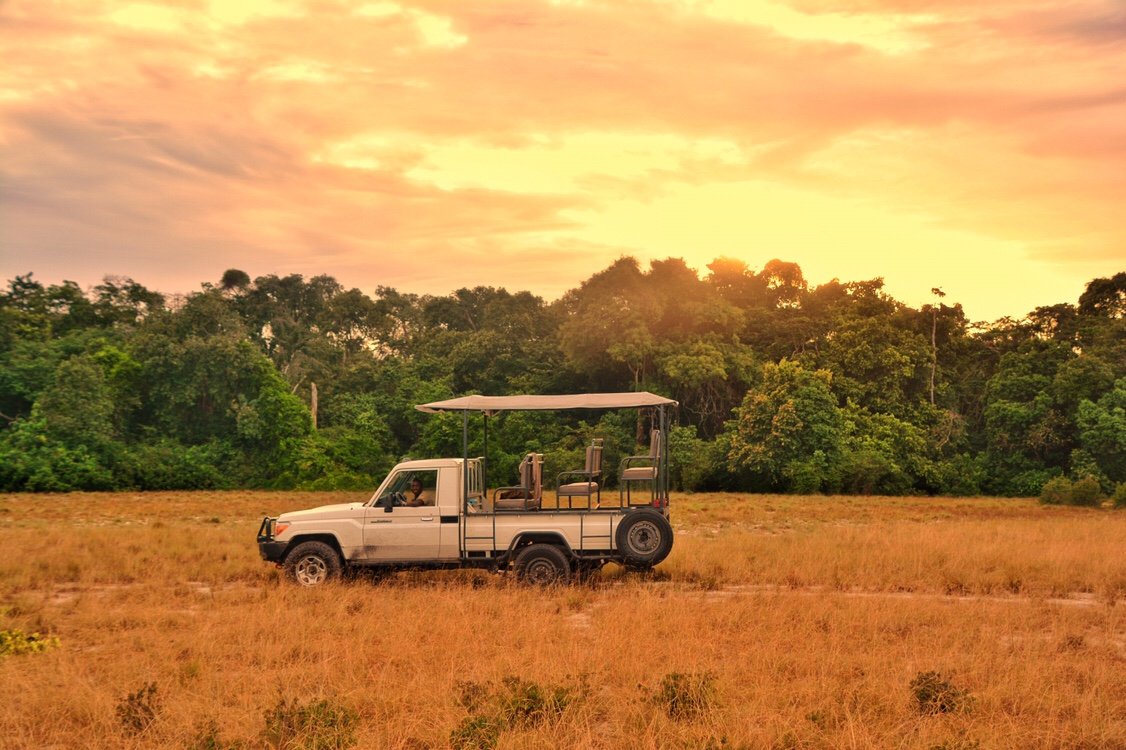 By the time the sun was setting, within half a day, I felt I had already been rewarded amply for the long journey. Dinner was alone, for I was the only guest in the entire hotel.  For all I knew, I was the only guest for miles and miles around. Facing the blackness of the lagoon, occasional large splashes could be heard as fish and crocodiles played in the waters. Given the remote location, a surprisingly tasty and well presented meal was served, alongside cold beers, wines and spirits, as desired.

The next morning, I departed early for a morning walk. Having crossed the lagoon, the walk yielded few sightings apart from getting closer to the adorable, but reluctant to be photographed, red river hogs. Just walking through the sodden forests, beneath the giant trees, and across the savannahs at dawn was an experience in itself.

If I am honest, I was indifferent about disturbing any crocodiles sitting peacefully in the small ponds and streams underneath the forest canopy. The humidity, despite the proximity to the coast and the early hour, was not to be sniffed at. Though we walked at a leisurely pace, I returned in dire need of a shower and change of clothes.

Explorations by boat, canoe, foot and 4×4, in all directions across the park, over three days was enough to see everything yet feel like I had barely scratched the surface. My night spent in the Lodge’s remoter still Tassi Camp merits its own write-up (coming soon), as does tracking the recently habituated group of lowland gorillas (read here soon).

We spotted hippos, young and old, though only their eyes and ears. Irascible monkeys swung from the trees. Small colorful birds fluttered in and out of spherical nests, clustered in small communities hanging from trees. Larger birds stood alone, surveying the lagoon and tributaries, before deciding we were close enough and taking flight.

The coastal game drives were very special and are the national park’s crowning glory. As the foliage of the dense jungle forests of the Congo basin peters out, the white sandy Atlantic seashore takes over. Where the two meet, forest elephants wander and graze. It was a delectable image to see the powerful surf crash ashore the white sandy beach and, with a slight shift of gaze, see the powerful forest elephants standing on the same white sand, tugging at and stripping the foliage of the smaller trees and bushes. 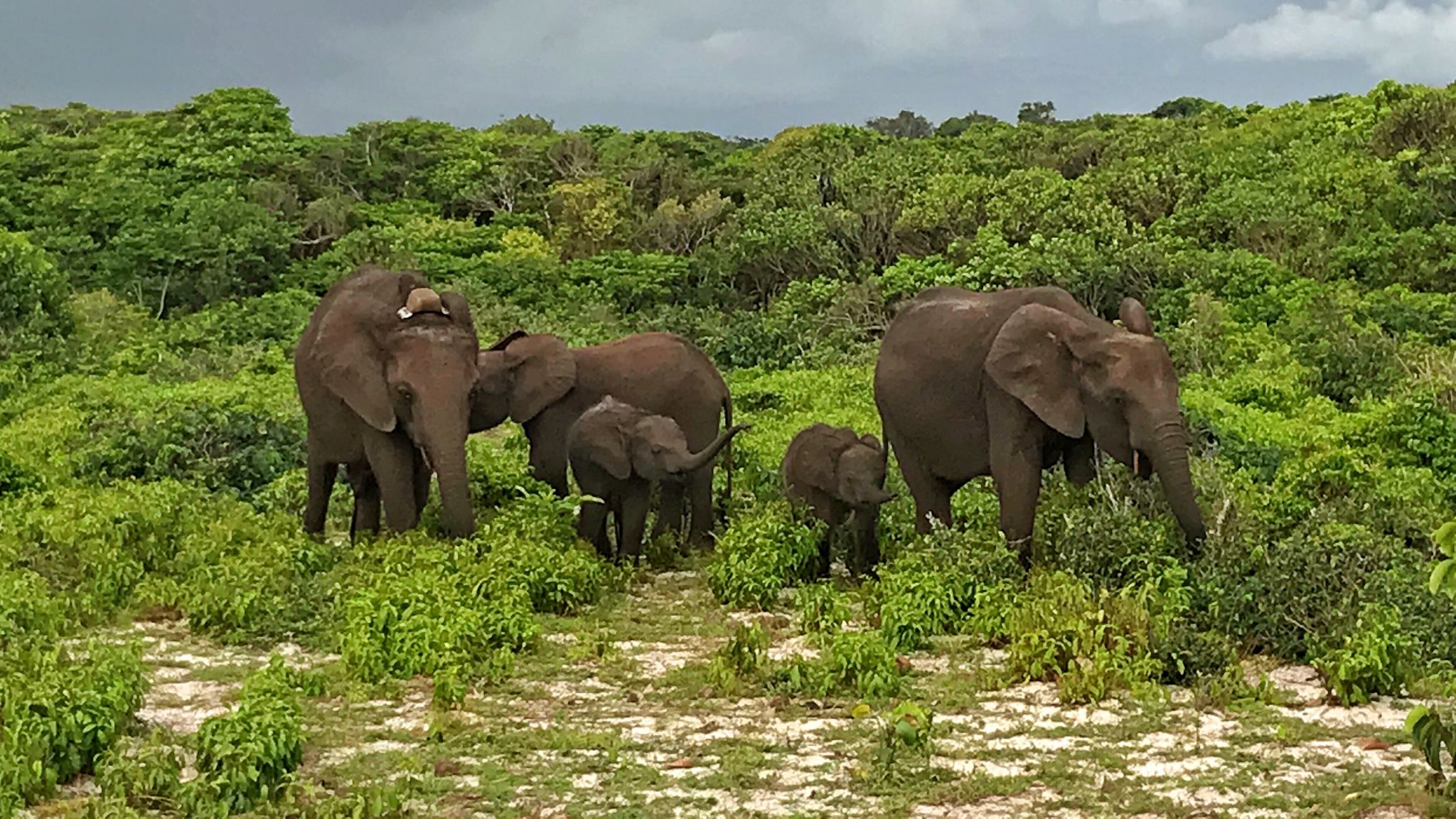 It would be remiss of me not to warn that the beach is badly strewn with washed-up plastic that has been discarded into rivers that wash out into the sea. Given prevailing tides, all manner of plastic rubbish large and small is sadly scattered across the otherwise idyllic beach.

The coastal pollution aside, Loango National Park is raw and unadulterated natural beauty. Moreover, it is unadulterated because you will likely share it with no one else but the animals themselves. The effort required to get there, and get around, meant that I did not see one other visitor and not one other vehicle during my stay.

I heed Janni’s warnings but my experiences in Loango National Park were the very definition of what luxury travel means to me.

The author visited Loango National Park at his own cost.  For lots more photos of the trip, take a rummage through my Instagram album.