Home » Loango National Park – Getting There 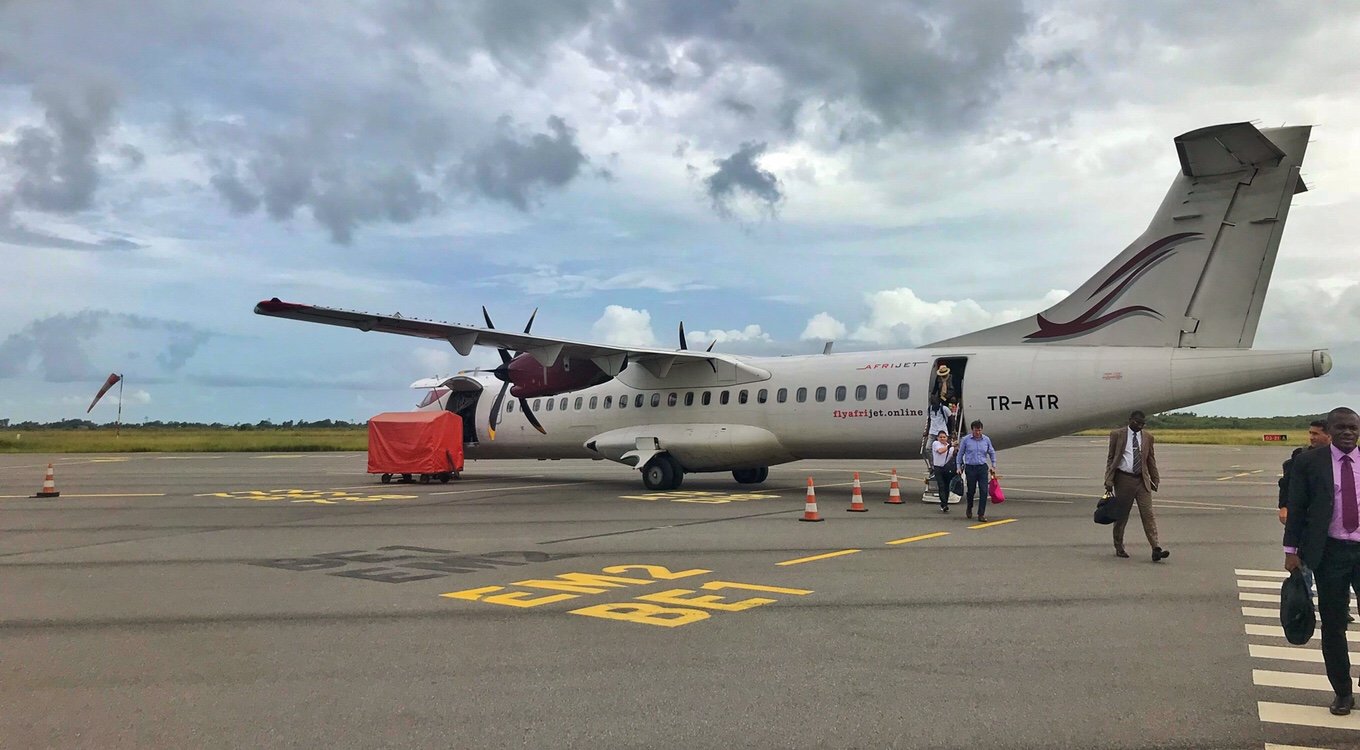 At the time of writing, getting to Loango National Park and, in my case Loango Lodge, is quite an undertaking. Whether you are heading there, thereabouts, or just enjoy reading adventures of the road, here is how I did it…

There are no direct or paved roads from Libreville to Loango National Park. There are not even any roads to the nearest major conurbation, the commercial oil town of Port Gentil. Sitting out on a limb, at the tip of a peninsula surrounded by jungle forests, wide rivers and the Atlantic ocean, getting to Port Gentil is, in fact, the easiest part of the journey.

Afrijet fly multiple daily flights from Libreville to Port Gentil. The airline predominantly serves the business community, especially oil company employees and, to a lesser extent, their families. As such, the cost of flying with Afrijet is high; as is everything ‘Western’ in Gabon.

The airline’s tiny but efficient dedicated terminal is separate but adjacent to the main Libreville international and domestic airport terminals. Their little waiting lounge has free Wi-fi and complimentary tea and coffee, in keeping with their business clientele. You can leave it perilously close to departure to check-in, though such logistical flippancy is beyond my mental health capabilities.

After barely 30 minutes in the air in one of the airline’s c. 60 seater propeller aircraft, the air hostesses had flung out a cup of juice and a pain au chocolat, and you are on the tarmac again. Port Gentil is a small airport and Afrijet have their own even smaller room on the side room of it. Keep your luggage receipt handy, as it will be scrupulously checked before being allowed to exit with your bag.

Cars, their maintenance, their fuel and their taxes are all expensive in Gabon, especially if you are bashing the unforgiving ‘piste’ roads regularly. Hence, I was transferred by an efficient relay of vehicles. First up, the Loango Lodge had arranged for an old local fellow and his standard estate car to pick me up at the airport.

After a brief stop at an impressively well stocked supermarket and an ATM, at my request, the first changeover was at the rather pleasant Hotel de Bougainvillier. Given that I had taken the 7am flight, breakfast at the hotel, rather than from the supermarket, would have set me up nicely for the day ahead and I later rued not having done so. 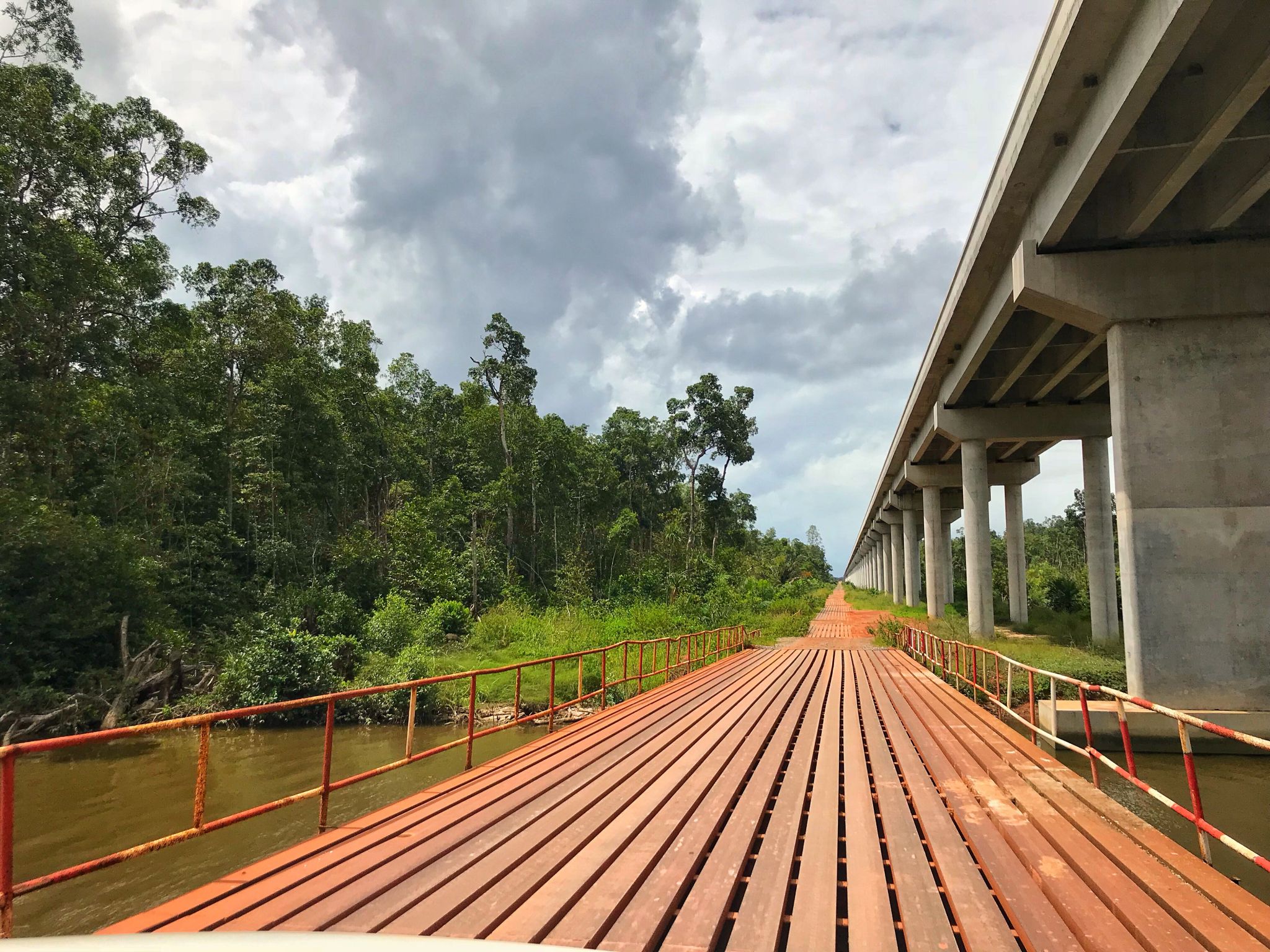 Vehicle number two was with Philippe, the super friendly and knowledgeable owner of Hotel de Bougainvillier, in his own 4×4 truck. In the open rear of the truck was my rucksack, swathed in waterproof tarpaulin, much food and general supplies.

The road to Iguela is not open to the public: all drivers and vehicles require a permit. The reason being that a Chinese construction company is in the latter stages of creating a controversial grand highway from Port Gentil to the hamlet of Iguela.

Therefore, any permitted traffic must take the parallel track and its bridges all constructed to carry the heavy construction vehicles used to build the impressive bridges, flyovers and tarmac highway. Assuming the new highway does not sink into the swamps and rivers it passes over, it will be a game changer, allowing fast and direct access (almost) to the heart of Loango NP.

At present, work has been halted due to a payment disagreement between the Gabonais Government and the Chinese company. The vast construction bases look eerily deserted, with much of the now defunct equipment already being enveloped by vines and grasses. Parts of the new road are usable but it is still a 4 hour drive to the hamlet of Iguela, flanked by captivating dense equatorial jungle scenery on both sides. 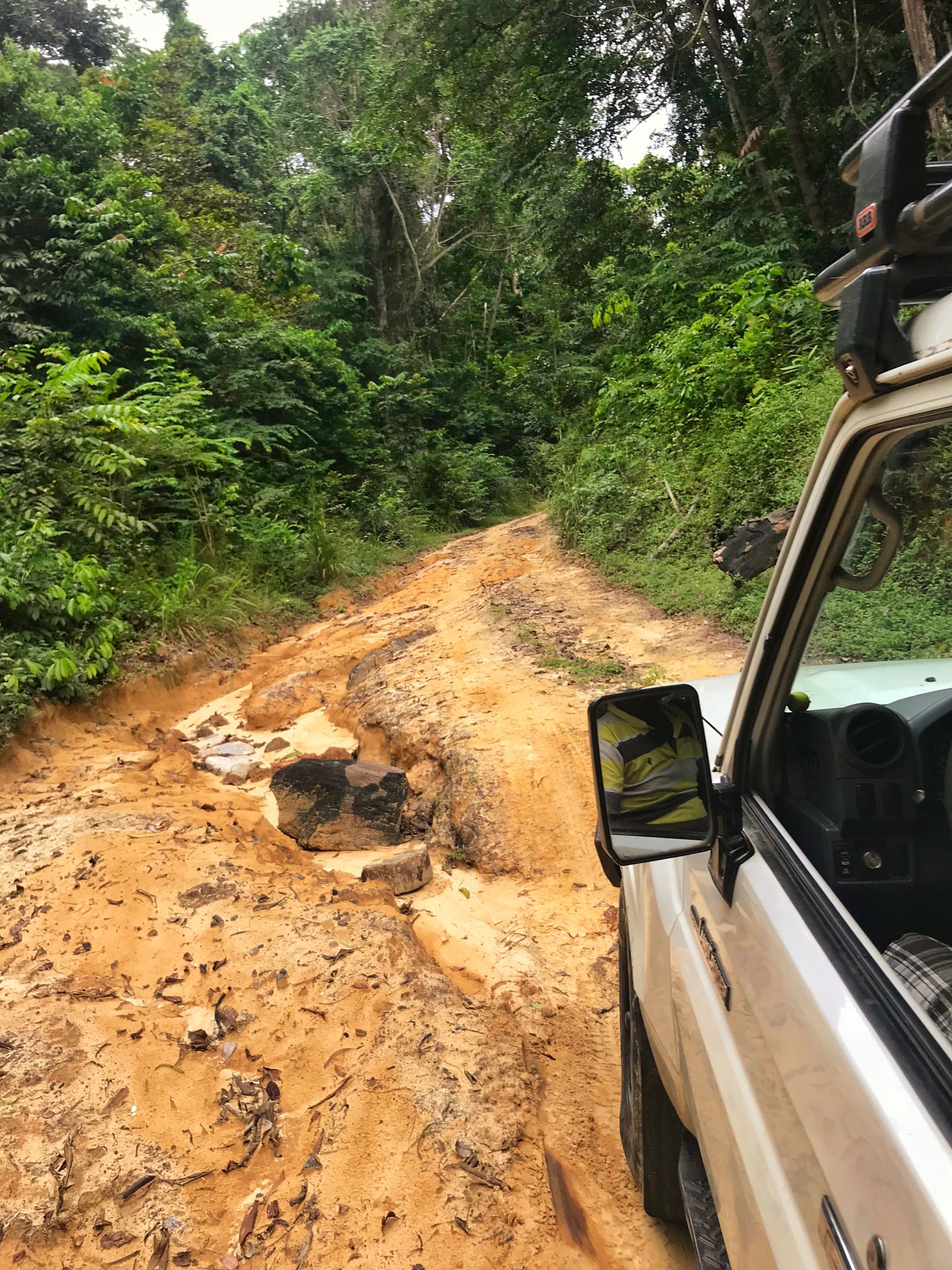 At the small Liambassi Camp, overlooking a pristine white beach and owned by Phillipe of the Hotel de Bougainvillier, I changed into my third vehicle: a safari truck from the Loango Lodge. Along with all the supplies, we were packed in for a bone rattling hour traversing, “la piste.”

Deep puddles and crevasses punctuated our track, as well as thick mud in places, requiring the young driver’s full mastery of the 4×4’s capabilities.

The jungle and savannah scenery slowly passed by, mesmerising, with no two views the same. However, I will concede I was glad to pull into Loango Lodge at near 3pm. A long journey but one which would prove utterly worthwhile.

Read about my time in Loango National Park here.

Philippe’s Hotel de Bougainvillier can be found on Avenue des Douanes in Port Gentil and booked through Booking.com, etc.