One of Kerala’s most popular delights is to navigate its charming, narrow back water channels. Bisecting paddy fields and lined with palm tress, the canals get narrower as the journey advances into the remoter reaches. Land transport to such places is all but impossible. The sparse local populace live in small houses on the slithers of riverbank that demarcate sunken field from riverine thoroughfare.

As with any good trip, it is often not the destination but how you get there. The myriad of kettuvallam houseboats that ply these waterways provide ample choice, as this blog discusses in depth. The adorable and unmistakable thatched kettuvallams are an unwaveringly relaxed way to cruise the backwaters. 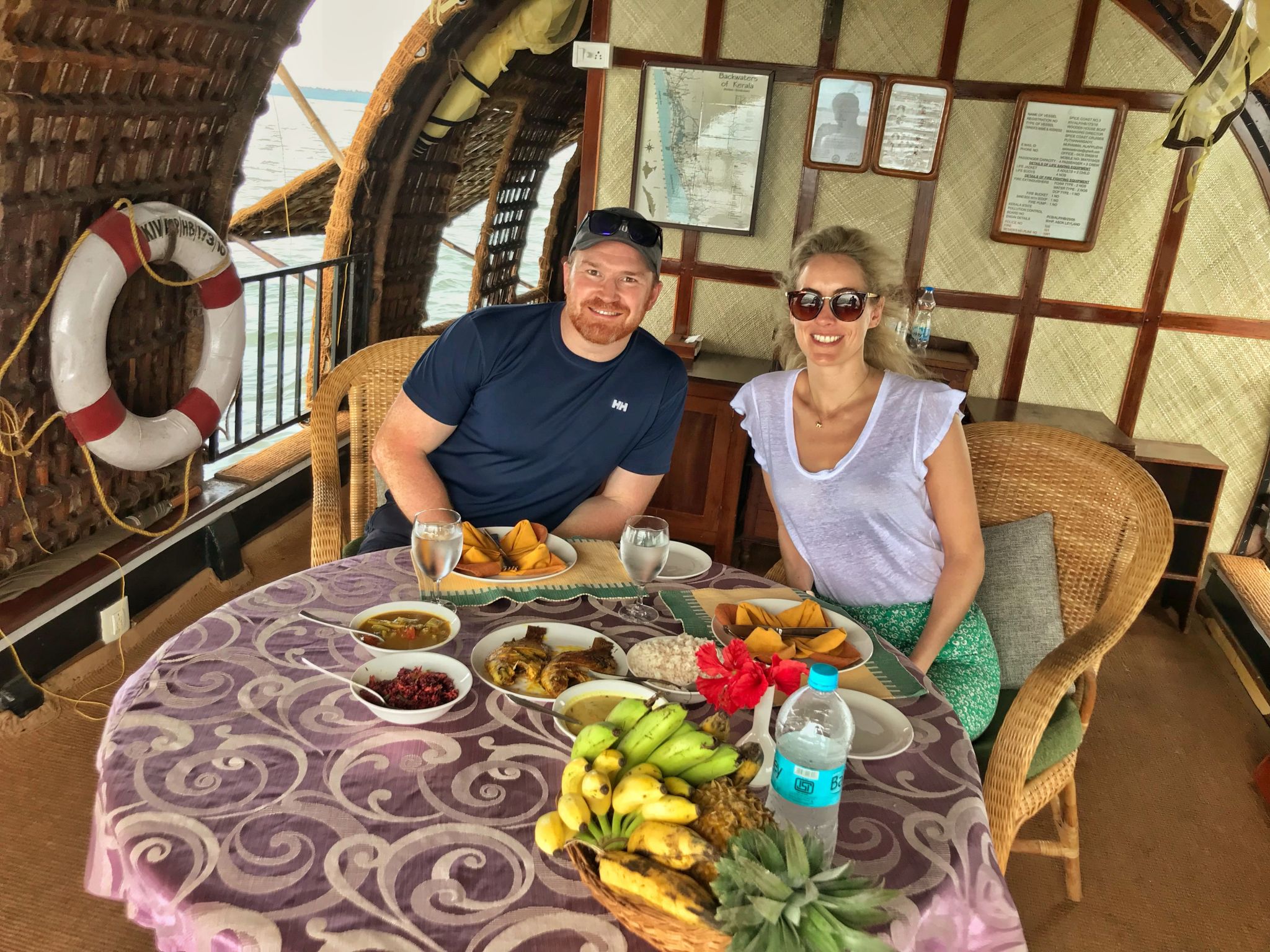 We departed the private boat yard of CGH Earth’s Spice Cruises around mid-morning, having first inspected the spotless boat and agreed what extra wine or beer we would like on board.

Pottering south along the western banks of Lake Vembanad, we passed the large metal triangular arms and nets of the ‘Chinese fishing nets’. Nestled in the thick forest along the lakeshore, impressive homes, hotels and even a school looked out onto the lake. We were some of the lucky few to catch sight of them, as we reclined on the deck of our small floating home.

At the southern tip of Lake Vembanad, and not more than a few hours after after departing, we moored up on a thin strip of land, little wider than a footpath, for lunch. Grilled fish, vegetable curries, and fresh fruit all prepared at the small kitchen to the rear of the boat.

After lunch, we chugged our way down the Pampa River, more formally known as National Waterway 3: the main north – south arterial canal. Some smaller boats passed us but, by and large, everyone evenly pootled along at the same pace. The buildings on either side of the wide river seemed substantial, with discernible shops, water were taxi stops and good looking two storey homes.

As is the intention, it is all too easy to get lost admiring the view; the hypnotic bucolic scenes of daily life as you recline in comfy wicker chairs or laze horizontal on the mattress covered in a crisp white sheet.

By nightfall, we moored up on the banks of the Pampa river. Oddly, our crew decided to pick a spot just about within ear shot of the fly-over bridge of the N12 Highway, a short distance outside the village of Thekazhy. Not that it was needed but a mosquito net was dropped from the lattice palm ceiling to the floor, to enclose us. A few lamps lit our atmospheric dinner of traditional Keralan curries and dishes. True to the local style, they were served beautifully on served on a large banana leaf and were rich in coconut and spices. In the pitch black beyond, the background sounds were soon nothing but the chirp of crickets and the occasional splosh of a playful fish in the river.

Rising a little after the sun, the crew prepared a fresh breakfast or fruit, omelettes, coffee and my new favourite, masala chai. One can just sit back and laze throughout the trip, enjoying the attentive service. We, though, were keen to set foot on terra firma and get out for at least a short walk to explore the local villages and places of religious worship.

We moored up and and hailed a tuk tuk with one of the crew members to the Ambalapuzha Sre Krishna Temple, just south of Punnapara. A brackish pond, a number of terracotta roof tiled building buildings and a colourful arcade of shops selling treats and items for worship gave for an intriguing wander. Racks of oil lamps affixed to exterior walls which, by night, must make for quite a sight.

The most startling sight for me was the poor elephant living at the temple, shackled so firmly to the ground so as not to be able to move even one foot. A creature that should roam wild and free rocked from side to side, listlessly. I believe, once a day, it is used for ceremonially procession before returning to the shackles. It was hard to stomach the two-faced piety of the temple whilst they abused this animal. 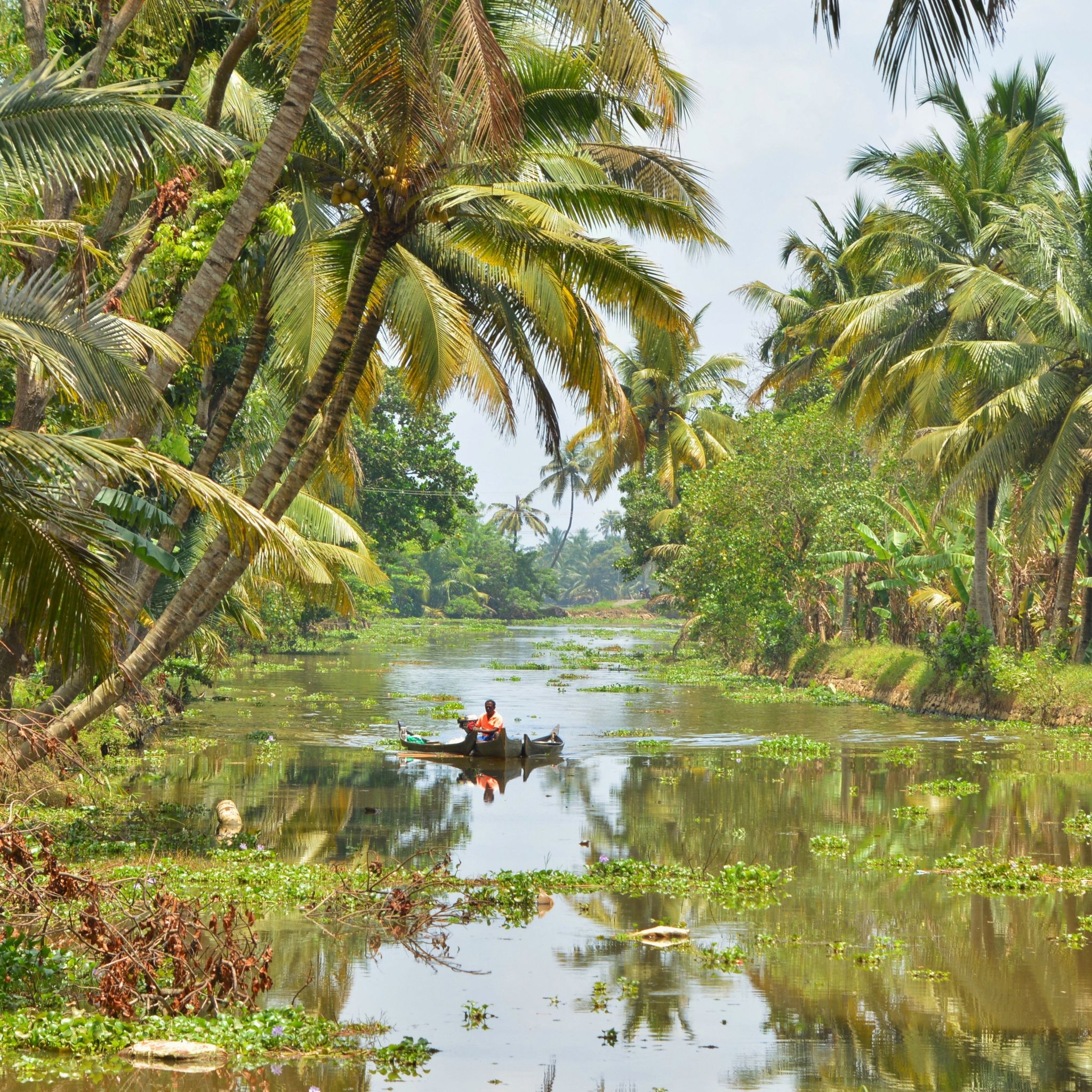 Back on board, our journey continued, now heading north on the Manimala River. Men in dug ou canoes cast nets in the waters to catch what they could.

On steps down from the river bank, ladies stood knee deep in the water, bent over, washing clothes. On other steps, villagers stood half submerged, having a slow wash in the brown waters.

Our second and final night was spent moored up against a private spit of land owned CGH Earth, just south of Kumarakom. It allowed for the crew to get access to running water, fresh supplies and catch-up with colleagues, as two other Spice Coast Cruises boats were moored there, at a discrete distance.

It was a gentle start for our final day, as we enjoyed our final fresh breakfast aboard.

Though the boat has a shallow draft, there was a palpable sense of concern as we left the mooring. The initial passage through long water grasses meant very shallow water beneath. With a rev of the engine and then silence, we held our breath as we glided slowly and silently through the grasses and into deeper waters beyond. Whilst the shallow waters were not dangerous for us and the crew, one can imagine the wrath of their boss, not to mention the ridicule of their colleagues, had they beached their boat.

The slow amble back up Vembanad Lake afforded us our last vistas of the calm waters and itinerant bird life. A cluster of cormorants sat on partially submerged trees, in the middle of the lake. Undisturbed by our presence, they nonchalantly watched our steady progress. The crew seemed demob happy, looking forward to seeing family again after three days away. By midday we were sadly back on dry land. Hugs and photos with the crew, before a sad farewell.

Cruising the backwaters of Kerala, with the right boat and crew, is something uniquely spoilt and relaxing. There is practically no other way to see the remote communities that live by the water and work in and on the water. An experience not to be missed or forgotten.

The author travelled at his own cost and can happily recommend Spice Coast Cruises, part of the CGH Earth group.