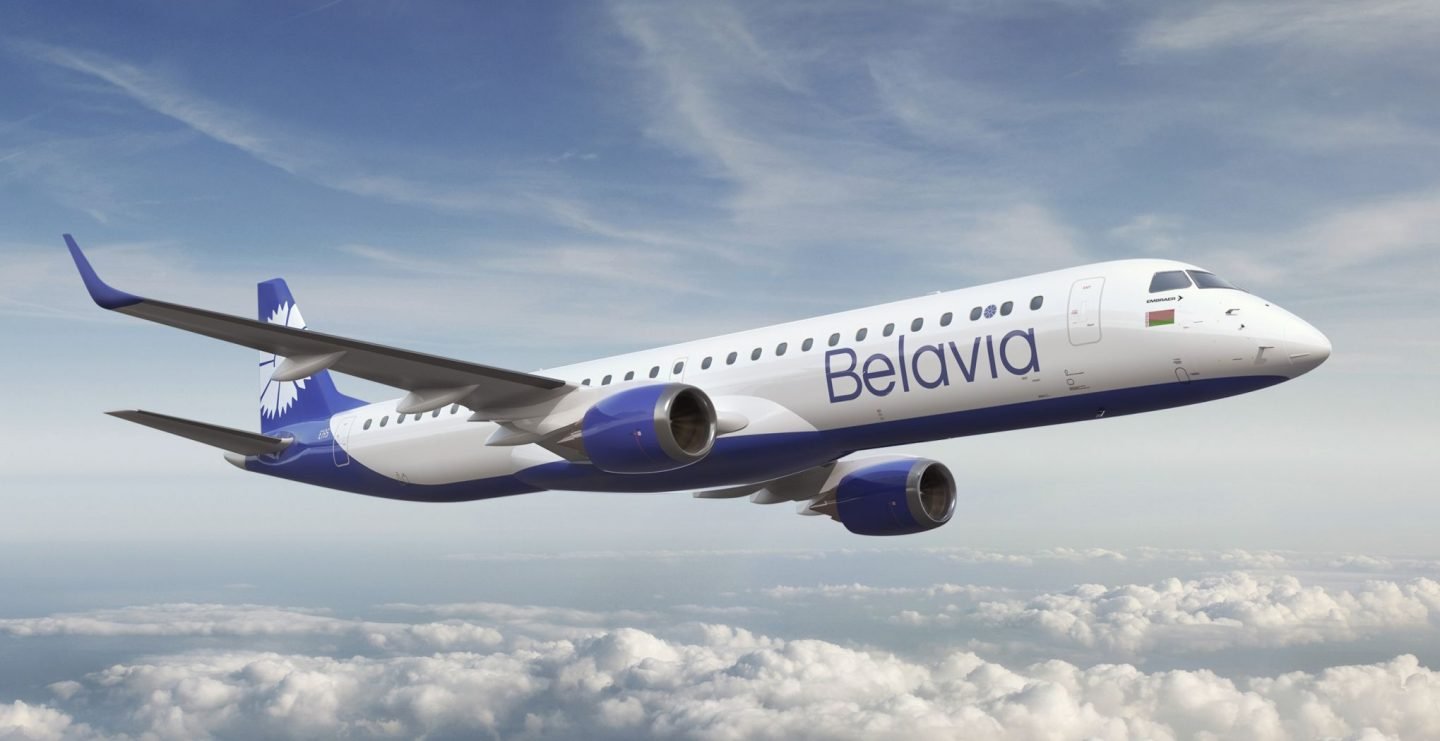 Flying on the flag carrier of an emerging former Soviet nation is to climb aboard the hopes, aspirations and the reality of that nation.

Belavia, the long-standing national airline of Belarus, is no different. The airline is rightly proud of its new fleet, recent re-branding and full memberships of the International Air Transport Association (IATA) and the European Regions Airline Association (ERAA). Their focus on, “safe, regular and punctual operations,” might sound a little boring but no one would argue to the contrary.

Their daily service from London Gatwick’s south terminal to Minsk National Airport has opened the door to trade and tourism travelling in both directions.

The smart new Embraer 195 is part of a fleet leased by Belavia from Nordic Aviation Capital and can take a maximum of 75 passengers.

The 12 business class seats up front are arranged with a standard Embraer format of single seats on one side and two seats on the other.

The economy cabin seats are a fairly standard width and pitch – possibly a shade more than some budget airlines – and arranged 2 by 2.

Boarding was reassuringly quick and I would like to say straightforward. However, I was singled out to have my wheelie-case weighed at the gate and told it was too heavy for a carry-on. It was a fair cop, if wildly indiscriminate.

A flotilla of plain clothed (presumably) UK Border Force were bobbing around just after the gate ticket check and were taking most passengers aside for a quiet word. This time a friendly ‘chat’ about the purpose of their visit to the UK. Clearly my hand luggage shaming was deemed enough for one day and I was waved by.

The welcome on board was altogether friendly. Soon after take-off, a fruit juice or water was served (no alcohol, however) followed by a hot lunch service. A natty lunch box was handed out, alongside a small molten foil package of chicken or beef. My option is below is the chicken, albeit reconstituted into sausage format. The meal service included tea or coffee, with wine and beer still off the menu.

With an hour and half still remaining, the lunch box detritus was cleared and passengers sat back and amused themselves.

I say ‘amused themselves’ because there are no TV screens and no in-flight WiFi – either closed circuit to offer their shows on your device or allowing you to access the outside world. In the age of podcasts, downloadable films, and the fact that the flight is a whisker over 2hrs 30mins long, in-flight entertainment is borderline superfluous anyway.

The Belavia network provides solid regional coverage, flying to no less than 52 airports in 28 countries. Among them, many of the European and Caucasus capital cities,  as well as the niche market of some lesser known cities across southern Russia.

Chances are you won’t be connecting onwards with Belavia, unless you have a penchant for visiting desolate Russian industrial cities.

In either case, Belavia offers a slick operation worthy of your patronage. If that comes as a surprise, then you don’t know Belarus. Perhaps it’s time to pay the country a visit.