Perfection is hard to define; and even harder to find. Mnemba Island, sitting off the north east coast of the small spice island of Zanzibar, is not a bad start, however.

Donning your mask and snorkel, you could be forgiven for quickly losing an hour, and your bearings, following the unfolding collage of coral colours a metre or so beneath you.

Once described as ‘off the beaten track,’ it can no longer claim that honour. A new tarmac road and car park allows the dozens and dozens of tourists get as close as possible by land before taking to small skiffs for the brief journey out to the atoll.

On the beach are dozens of boatmen with their fibreglass skiffs and outboard motors, ready for the booked or impromptu customers. We clambered aboard ours, bringing the essentials: mask, snorkel, flippers, sun cream and water. As part of the deal, the boatmen brought tons of fresh fruit and bottled water in coolers for us. I’m quite sure the more you pay, the more they’ll feed and water you.

Heading out, skimming the deep blue waters, we noticed a flotilla of varied skiffs racing away from the atoll. It had all the hallmarks of ‘dolphin encounter’ and our boatmen thought we should join in.

What followed was a bizarre 30 minutes. Up to twenty small boats raced the dolphins, tried to guess their direction, get ahead of them, and throw their tourists into the water to watch the on-coming beauties. Suffice to say that neither the boats nor their passengers were built for such exigencies the flotilla slowly thinned out as perseverance and energy levels dropped. 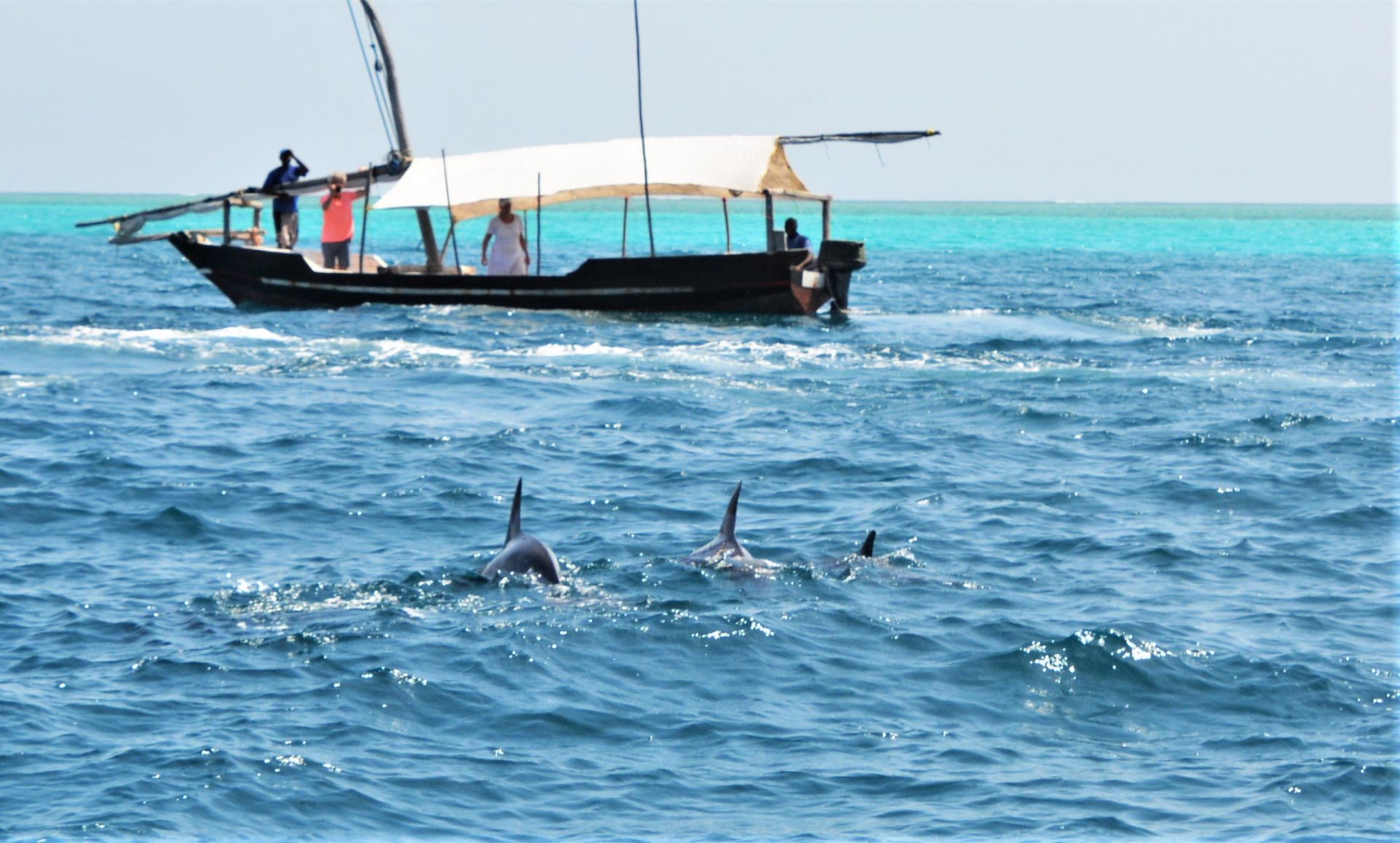 It’s hard to say whether the dolphins were that bothered by the chasing flotilla and sunburnt tourists flopping into the water around them. I’d like to say not, and that they were teasing us more than we were interfering with them. But the stop-start flotilla, complete with boats pranging into each other, did all seem a little unedifying. The only graceful ones were the dolphins gliding along beneath us.

Returning to Mnemba, we moored up just off the coral reef. The moment our back was turned, the boatmen chucked a load of fruit detritus into the water that they knew would attract scholes of beautiful fish. A little frustrating, as I’m sure the fish aren’t supposed to eat the fruit and there were so many fish already, they hardly needed any encouragement to emerge.

Once you are face down absorbing the colours and mini-dramas playing out between fish in and around the reef, you completely forget that there are dozens and dozens of other tourists bobbing around in the water. There’s enough space for everyone.

Where there is not space for you is on the island. Not without a reservation at the exclusive “andBeyond, Mnemba Island,” lodge. This may have been honeymoon part II for Mrs Jarvis and I but, alas, at $1,2760 per person per night it was to stay as tantalising out of reach on this trip as the dolphins.

I could have snorkled for hours but time and tide wait for no man. We took a slow circumnavigation around the atoll, admiring the pristine island, the crisp ultra-clear transparency of the water and the flocks of seabirds. With that, we skimmed back to the mainland for a final round of photos with the beauty of Mnemba in the background. Whether the Mnemba Atoll experience is the definition of perfection, I’m not sure. I have mixed feelings about the dolphin pursuit and the dozens of boats moored up might dint the magic a little for some. But the crystal clear turquoise waters, the coral reefs, the marine life and pristine beach backdrop are genuinely picture perfection.

The author and his wife travelled to Zanzibar at their own cost, arranged through AwayHolidays.