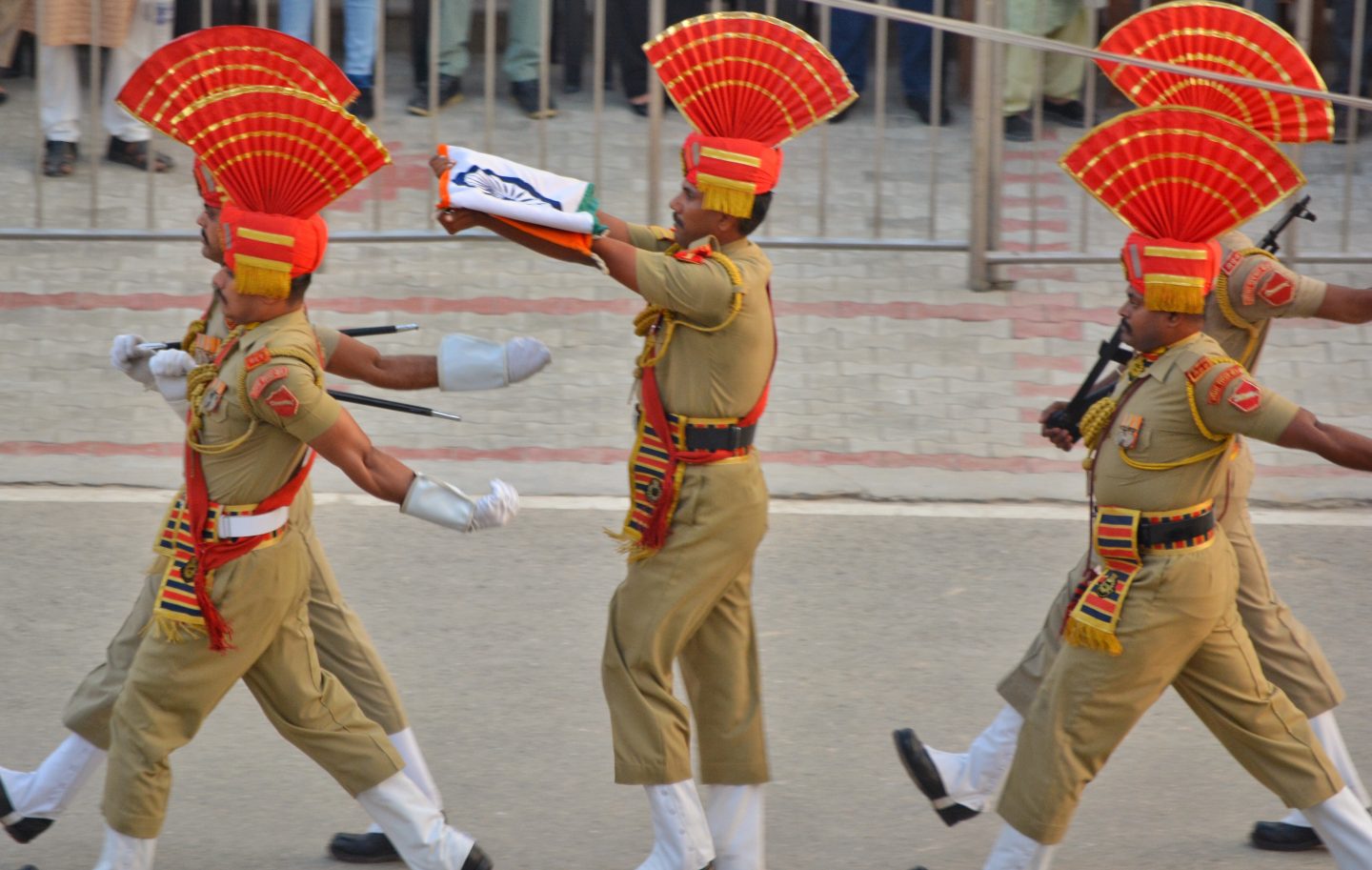 I received a nudge in the ribs from a young boy bobbing excitedly next to me, nodding towards the strip of asphalt we had been impatiently watching for signs of action. Two Indian border guards marched briskly up to the red and blue painted gates, arms swinging forcefully by their sides in exaggerated fashion. We cheered on que.

I received another nudge and a nod at my bag of sticky Indian sweets. The boy and I agreed in sign language that, if he stayed calmly in his seat for what was about to come, he could have a few. He agreed. I happily offloaded some treats and had gladly done my bit for Anglo-Indian diplomatic relations.

Meanwhile, our border guardsmen were giving a flamboyant high-kick, shiny booted feet rising passed the medals on their chests, before planting said feet onto the asphalt and stopping a few paces before the gates. Throwing their arms back, fists clenched and chests puffed out, they stared maniacally over the border to similar remonstrations on the other side.

The crowd of thousands, roared and cheered on the patriotic display. This was not an impromptu prelude to war, it was in fact the nightly border closing ceremony between India and Pakistan at the Wagah Border post.

Every evening since 1959, save for the brief period when the two countries were at war, the spectacle that accompanies the lowering of the flags is enacted by the Border Security Force on the Indian side and the Pakistan Rangers on the other. Neither are officially military units, for that would transgress the fragile border agreement between the two countries.

As I shuffled into the stadium on the hallowed asphalt, in a queue of thousands, I felt as if I was walking onto the stage at a pop concert. Music played from loud speakers, Indian flags were being waved and cheers rippled through the crowd. As I took my seat, there was a genuine feverish buzz of excited anticipation in the air. 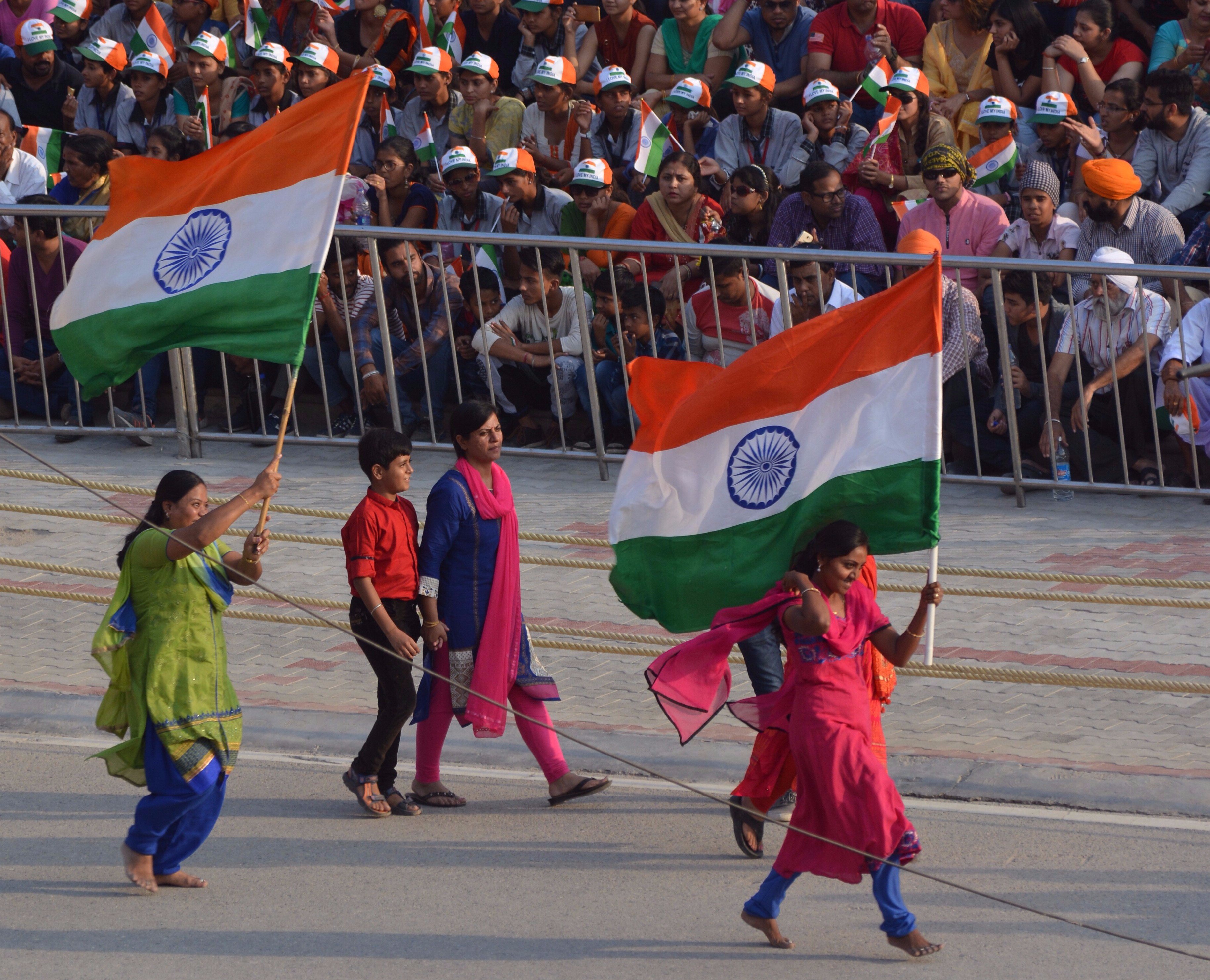 A chap dressed in all white held the microphone and set the crowd off chanting and cheering. Local ladies attending the ceremony queued for the honour of running up and down the short stretch of tarmac holding large Indian flags. When this had died down, more Indian female spectators and youngsters danced to Bollywood tunes on the road in front the massed spectators.

As they danced and gyrated in bright flowing saris or tight jeans and tops, one cannot help but think this is a subtle dig at their more conservative neighbours on the other side of the border, where this public behaviour would be surely indecent.

As the ladies took their seats, the resplendent men of the Indian Border Security Force marched in: crisp kahki uniforms, medals glistening, beards oiled and red hat with a striking vertical fan atop squarely affixed. They were tall lean men, typical of the Punjab, and carefully selected from their units especially for this ceremonial role.

Facing into a golden setting sun, their march was quick, to the gate, with an about turn and returning to the centre of the arena before another about turn. They halted sharply, kicked a leg high, foot raised to shoulder height before meeting the road with force and brutish stares shot at the border gates. 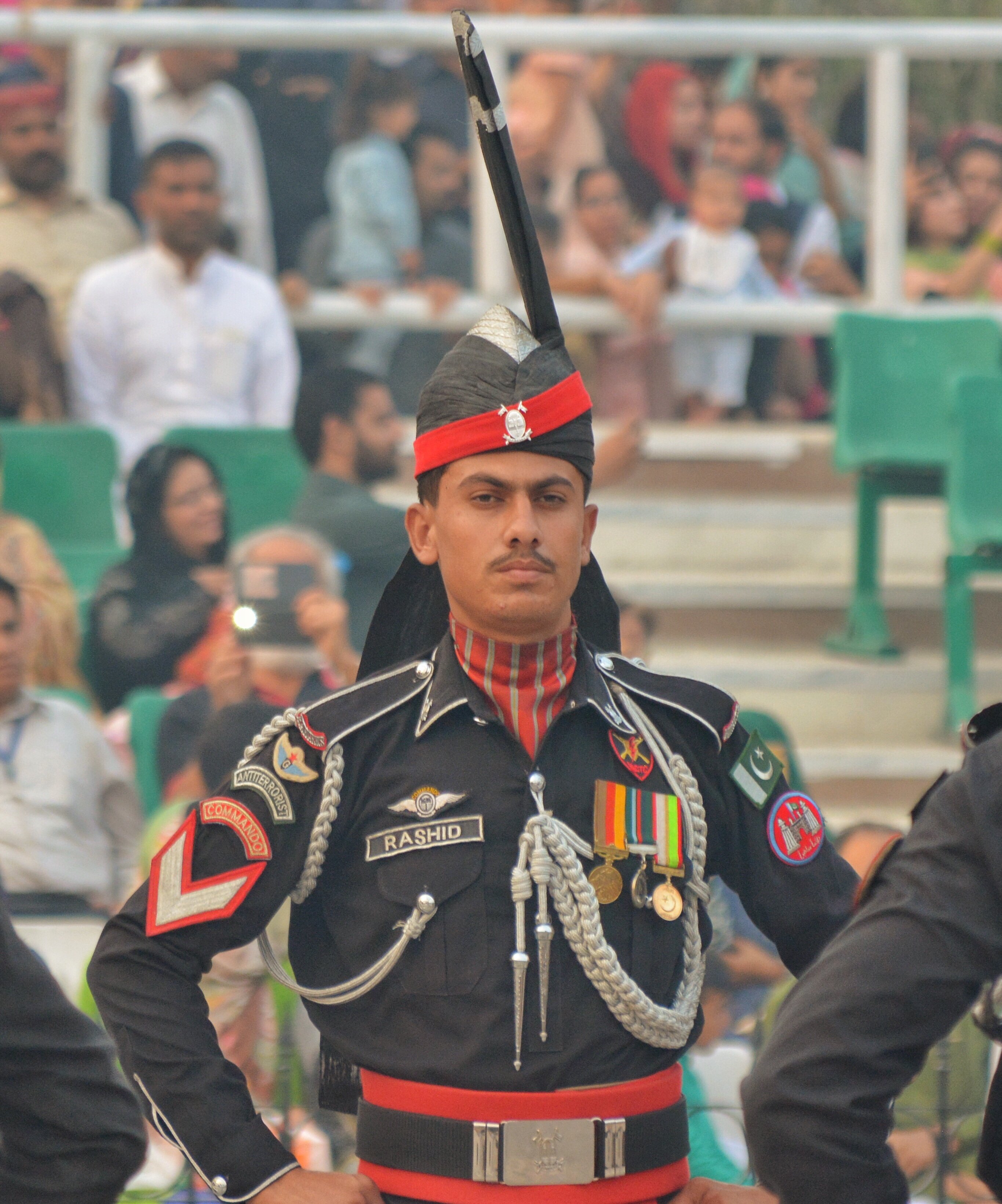 On the Pakistani side, having witnessed the ceremony there a few days later, it is very similar. A smaller and more conservative version perhaps, but supported with no less vigour. Before Pakistan’s Rangers march in, a couple of chaps spin in a circle waving the Pakistani flag. No jiving ladies here. The smaller horse-shoe stadium has ladies and families on one side and men on the other. 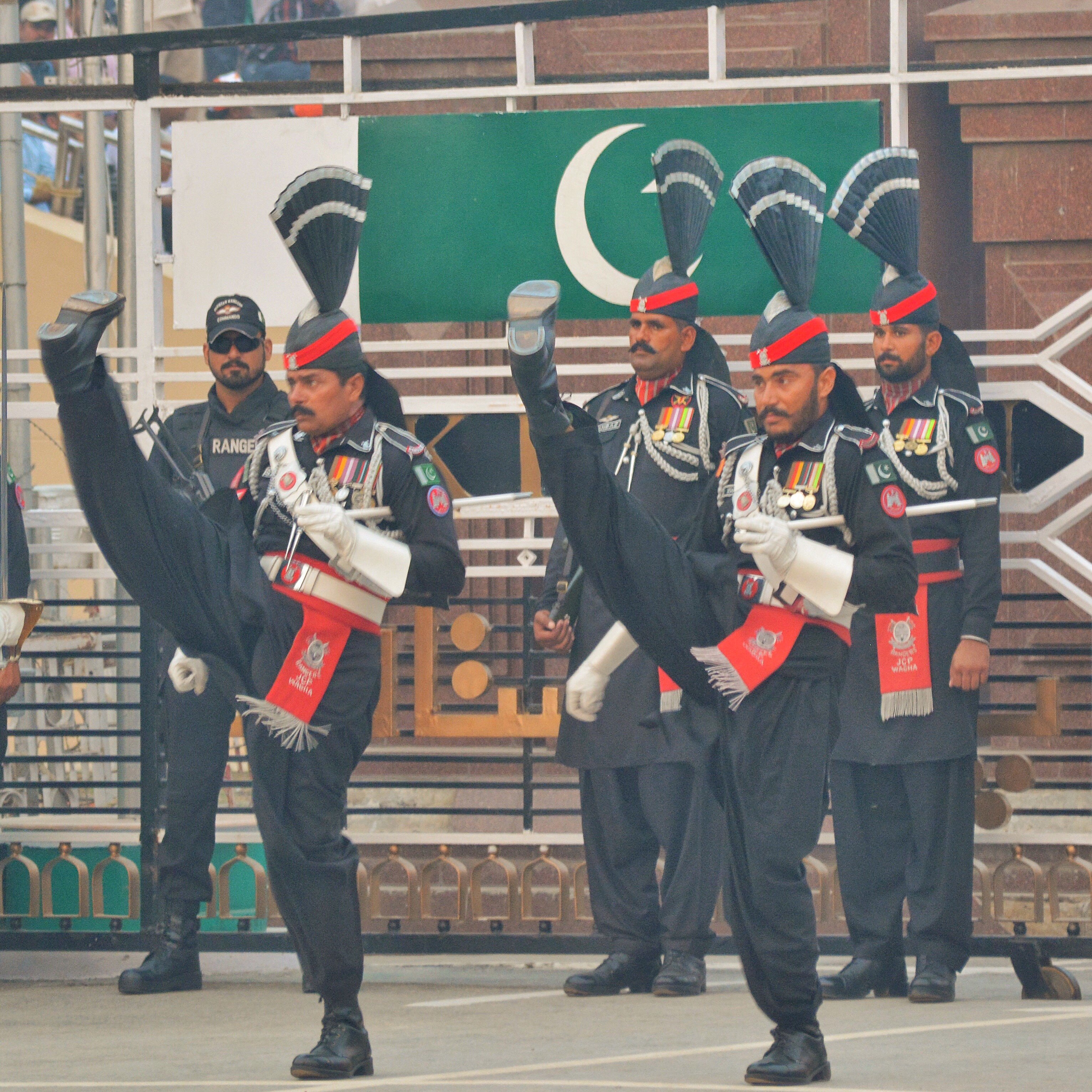 The Pakistani Rangers have the same uniforms as their Indian counterparts but all in black. They marched and goose-kicked in similar fashion, with two small portly chaps dressed in the colours the Pakistani flag, enthusing each side of the crowd to chant, “Zindabad Pakistan,” and cheer at the appropriate moments.

The announcers on the tanoy on the Indian and on the Pakistani side try to out do each other by seeing how long they can stretch the vowels in their identical scripts before they take their next breath. Whoever finishes first is apparently the loser, though I fear we spectators are the losers having to put with this bizarre drawn out aurally offending drawl.

Soon enough, as the parade ground ballet came to a halt, it was time for us to stand for both national anthems. The last post sounded as the flags were slowly lowered in unison and mutual respect shown by both sides. With a final cheer from the crowd awash in the deep warm hues from the setting sun, the flags marched back from whence they came, as the Wagah Border gates are shut for another day. 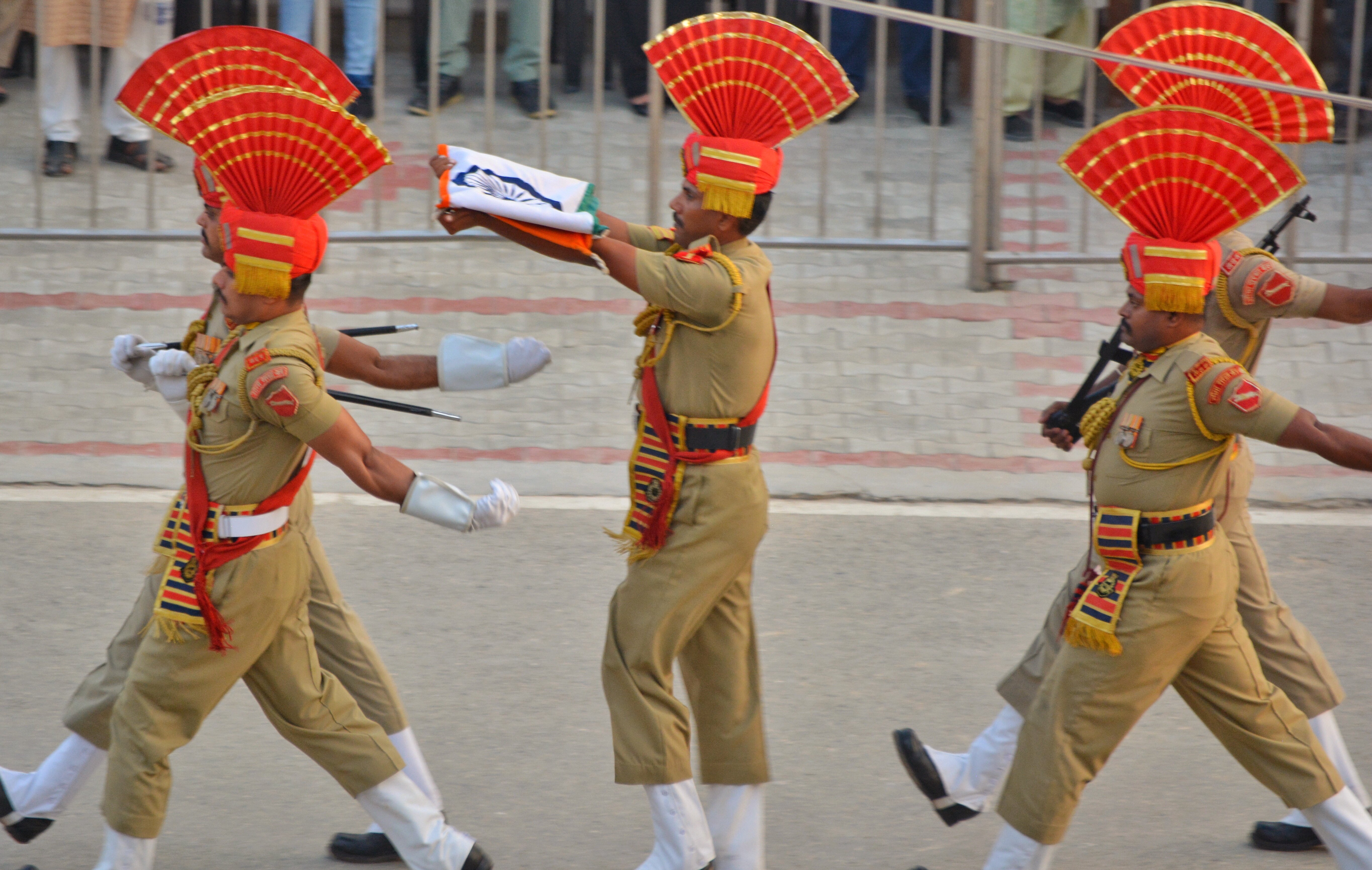 This is all choreographed theatre, pomp and chest thumping for the sake of pleasing their respective crowds. National pride yes, but no harm meant here at all.

It is said that when tensions are at their highest between India and Pakistan, the ceremony continues unaffected. Behind the scenes, however, the cruellest of blows is dealt: the two sides’ border guards stop exchanging sweets on their respective religious holidays until harmony is restored. I need not tell you how effective that diplomatic technique can be.

The ceremony starts at 5:30pm.

Bring your passport and a small bottle of water.

Wagah is situated on the Grand Trunk Road, c. 30km from Amritsar and c. 20km from Lahore.

Expect to join a crowd of thousands on the Indian side and hundreds on the Pakistani side.

There is a foreigners entrance queue on the Indian side but not on the Pakistani side. Both entrances involve a decent length walk from their respective car parks in often hot and dusty conditions.

A local guide who knows the ropes may be able to whisk you to the front of any queues, but allow at least half an hour or more from the time you arrive to get in.

Seating: On the Indian side, plastic garden chairs are set out for foreigners on the far top right of the stadium, as you face the border gates. Depending what you would like to see and photograph, you might be better off lower down, closer to the road.

On the Pakistani side, it is all seated. The foreigners section is at road level on the right hand side as you face the gates.

India: We arranged our visit through Magic Tours of India, whom I can highly recommend.

Pakistan: I used Shahid Yousaf from Pakistan Travels & Tours, who was excellent.